So, Telltale’s Walking Dead spin-off continues with an episode featuring all the stuff we love about the series. Here you’ll find shambling corpses, dramatic decisions, sudden demises and plentiful evidence of man’s inhumanity to man, leavened by occasional splashes of kindness and mercy. Michonne’s character deepens, with more about her past and the horrors that threaten to derail her, and the other characters are also developing in interesting directions. The tale begins right where episode one left off, resolving one cliffhanger only to hit us with a succession of tense action sequences and scenes of nerve-wracking suspense. Up to a point, Give no Shelter is exactly what we wanted.

We’ll keep spoilers to an absolute minimum, but it’s no surprise to find Michonne, Pete and new friends back in hot water with the vengeful matriarch, Norma, and her deeply dislikeable brother, Randall. Escape is high on Michonne’s mind but, unsurprisingly, not on Norma’s. Along the way we’ll meet new perils, both of the human and flesh-munching kind, plus a new set of characters to round the strong cast out. Telltale and Skybound handle every scene and every beat with a growing skill and confidence, reflected in the use of camera and cutting, animation and dialogue, and the way the interactive elements are used. Sure, the graphic-novel style and slightly stilted animation pull you from the story on occasion, but Give no Shelter has moments that will make you wince, evoke your sympathy, give good reason to hate certain characters or have you right on the edge of your seat.

Related: Persona 5: Everything we know so far

In short, there’s not much wrong with the ‘drama’ bit of this episode. It makes the best of a flying start, packs in some thrilling action sequences and knows when to build and when to let the tension simmer down. The voice acting is consistently impressive, while the music and sound effects do a great job of establishing and reinforcing atmosphere. As before, though, the interaction isn’t quite so hot. Give no Shelter is hugely gripping, but I’m not so sure that you’re actually playing it all the time. 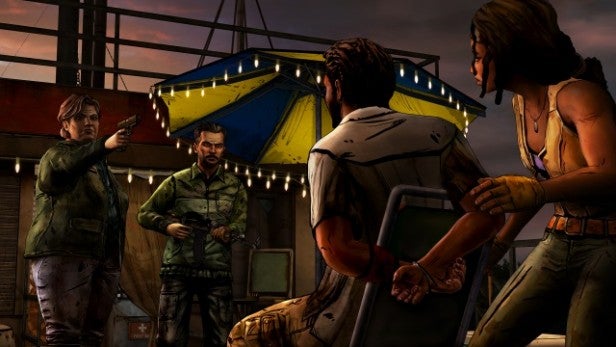 For a start, it leans heavily on quick-time events. For a good two-thirds of the scenes you’re expected to do little more than press the face buttons or move the right-stick as and when you’re told, and while this mini-series is making the prompts more dynamic, you’re still, at the end of the day, doing as you’re told.

Beyond that we’re faced with a couple of short sequences of investigation and exploration plus some scattered dialogue-heavy sections, where you’ll get to make Telltale’s signature big choices. As usual these nudge the flow of the story in one direction or another, though they don’t really influence its wider path, and in a way give you a chance to direct Michonne, making her performance warmer or harder and her reactions more forgiving, more considered or more angry.

This stuff isn’t short of value, and a couple of the decisions you have to make will leave you squirming on Telltale’s barbed ethical and emotional hooks, wondering whether to go for instant satisfaction or a more risky, long-term win. Now we know the characters, this material is arguably more compelling than it was in episode one. 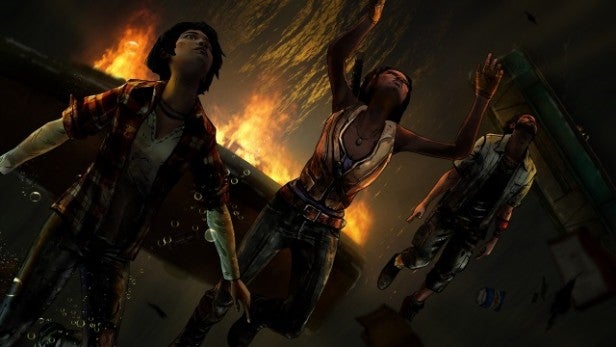 All the same, this remains more a semi-interactive experience than an actual game, and a surprisingly short one at that. Our other big concern about Episode One – that this was really one or maybe two episodes split unnecessarily into three – isn’t really helped by a running time of roughly eighty to ninety minutes for Episode Two. The split makes sense on a narrative level, leaving you on tenterhooks once again, but, seriously guys, couldn’t this mini-series have been released as a single instalment? The storytelling makes it worth playing, or at least experiencing, but as you press and flick your way through another action sequence, you can’t help wondering if Telltale needs to find some other trick in the Walking Dead bag.

This is a strong second episode with plenty to offer The Walking Dead fans, but it does nothing to battle any criticisms you might have of Telltale’s handling of interaction, nor any concerns you have about the length of each instalment. Play it for Michonne, the strong atmosphere and the drama, but don’t expect a game that challenges you on any other level.