When it’s not asking you to light yourself on fire, dismember yourself, chop off your torso and roll your still-alive head through a tight opening so you can find collectible doughnuts (no, really), The Missing tries to tell a deeply personal story about identity, sexuality, friendship, and suicide. It’s an uneasy marriage of tones that never quite comes together, but the heartfelt writing will make you root for the main character, J.J., all the way up until its ambiguous ending—providing you can put up with its stiff platforming.

It’s the latest game from Swery65, creator of the cult classic Deadly Premonition, known for its off-beat story, sense of humour, and wonky mechanics. The Missing is far less ambitious in scope—it’ll only take eight hours to jump and puzzle your way through its world—but it retains the same love of the bizarre.

As J.J., you’re searching for your maybe friend, maybe lover Emily, who disappears at the start, and from the off you’re not sure what’s real and what’s a dream. You’ll see doctors with deer heads, receive texts from your favourite plushie toy, and meet a recurring demon mini-boss who chases you across levels carrying a giant scalpel. You’ll also collect optional doughnuts all the way through, most of which come from hard-to-reach cardboard cut-outs of the doughnut shop’s mascot, which play a cutesy jingle when you find them. 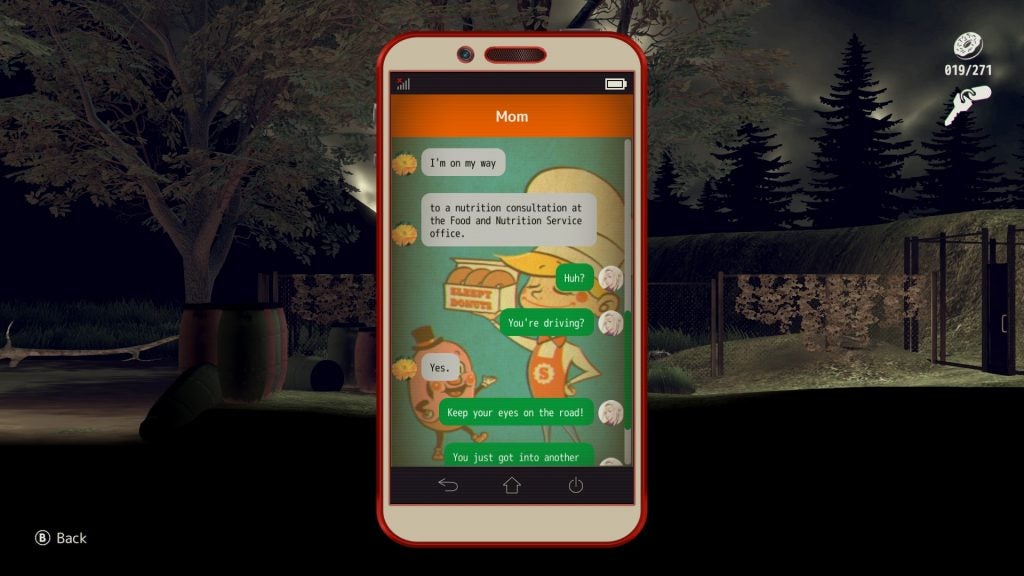 To pile on the surreal, you’re actively hurting yourself to solve the puzzles. J.J. can withstand being set on fire, stay alive after she’s lost all her limbs one-by-one, and turn the world upside down if she’s hit hard enough in the head, recovering with a button press.

Sometimes, solving a puzzle is as easy as chopping off your arm—jumping into barbed wire is the best way to do it—and using it to weigh down a see-saw to create a new route forward. Other times, you’ll set yourself alight and transfer the flames to snaking vines blocking your path. It seems gruesome at first, but you’ll quickly get used to the gore, and soon you just think of each flailing, bloody limb as a tool.

I like how, at each stage, The Missing slowly introduces a mechanic before ramping up the complexity, so you always feel like you understand the challenge at hand. For example, the early fire puzzles are simple—walk into the flames and then run forward until you hit an obstacle—but then you’ll find dripping water sources you need to turn off in order to keep the fire alive. Then, you’ll learn about how falling onto certain surfaces kills the flames.

Finally, it all comes together in a complex section about re-starting a steam train, which involves firing up an engine, setting yourself ablaze, navigating through soaking carriages and destroying a blockage at the front of the train, setting it in motion.

The Missing has plenty of imagination: you’ll be using your lopped-off limbs to trick a set of scales into thinking it’s carrying the required number of gold bars, and using your flaming body as a torch to scope out a level before returning to the start and pushing boxes into the right place to bridge gaps. It also throws in one-off puzzles that would make little sense in isolation, but feel like natural extensions of the strange setting. In one segment, for example, you restore power to a diner, drag a dead body and prop it up on a stool, before playing the right music from a jukebox to make the corpse cough up a door key. 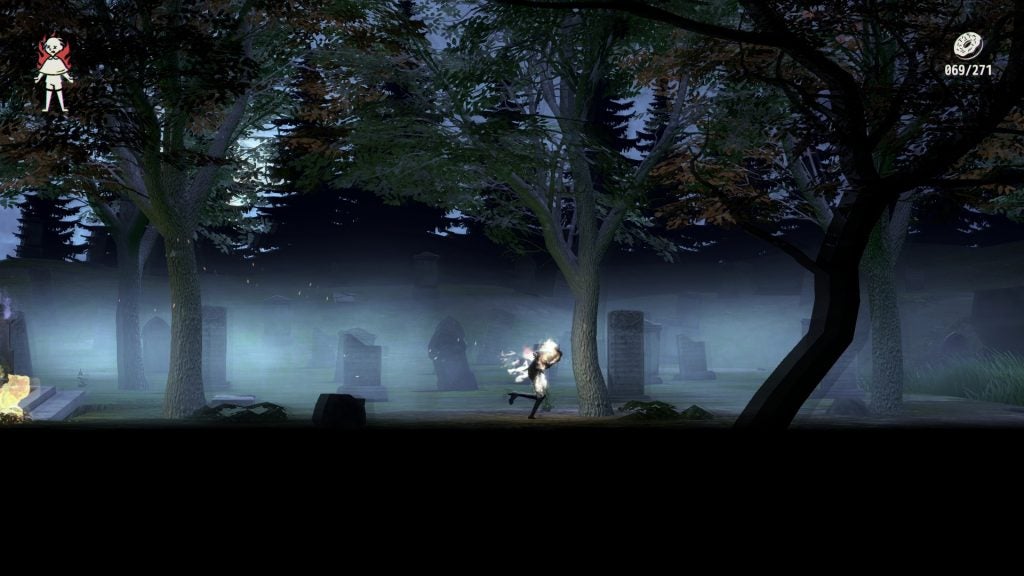 Unfortunately, it runs out of ideas around two-thirds of the way through. A swinging wrecking ball from early in the game that smacks you on the head, turning the world upside, returns later in a different skin: a mechanical monkey that crashes you between two cymbals. It looks very different, but the puzzles it generates are near identical.

It’s also hard to enjoy the basic platforming. Once you’re pressed the jump button, you can’t alter J.J.’s trajectory, which makes her feel heavy and unresponsive. You can only jump one set distance, too, which doesn’t allow for any nuance when trying to get across tricky gaps, which limits how you play the game in addition to the puzzles The Missing can push upon you.

Transitioning between standing and crouching is painfully slow, and J.J. will often interact with the wrong item if two objects are lying nearby. It makes opening hour, where you’re still meeting simple puzzles, feel like a slog.

But while I didn’t care for the platforming, I enjoyed getting to know J.J. and the rest of the cast, who you meet via text messages. Periodically, your phone will chime and you can pull it up to read through conversations with your mum, a college professor, your favourite plushie toy, and your friends. It’s clear these conversations are from the past, but they play out in real-time, so you’ll receive updates on each one as you progress.

The writing feels genuine, and manages to give you a good sense of each character’s voice and personality. The professor will type long, winding paragraphs about their love of Star Wars, while one of your university friends speaks almost entirely in emojis. Each conversation is full of subtlety, and everything a character says reveals not only something about themselves, but about J.J.’s strengths, passions and vulnerabilities. 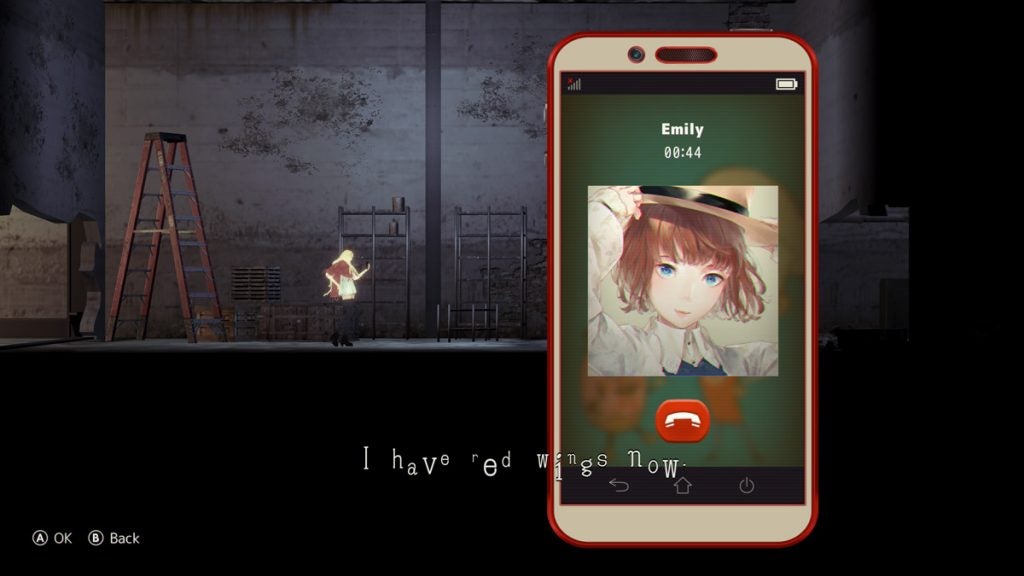 Every time I got a batch of new messages, which arrive periodically as you progress, I was eager to pull them up and read what had happened. They’re mostly inconsequential—discussions of class assignments, boyfriends and career paths—but that’s the point: you really get a sense of who J.J. is in her day-to-day life, and it lends weight to the twists and turns towards the end.

And you can expect twists galore later on. It’s a more concrete story than the ever-ambiguous Deadly Premonition, but I still changed my mind several times about what I thought was going to happen. It’s not afraid to change pace in an instant or introduce red herrings, and what might seem like an obscure aside will end up having significance in the light of information you learn later.

Without spoiling anything, The Missing’s latter third tackles topics that most games would shy away from. While I struggle to fully take it seriously at times—the voice acting in cutscenes is occasionally laughable, and those cutscenes are broken up by the limb-severing puzzles, complete with those giant mechanical monkeys — I admire its ambition, and the effort it puts into fleshing out J.J. as a character makes the ending feel impactful.
For that reason, I think The Missing is worth playing. Its platforming is clunky, its animations stiff, and you eventually tire of its repeating puzzles—but I’ll remember J.J.’s story, and her inner struggles, for a very long time.