Available on iOS
Looks can be deceiving. You might think that the most exciting thing your average suited and booted executive does is head down to the car park at Homebase and pay a group of lads £5,50 to wash and wax his Ford Mondeo on a weekend afternoon in order to keep up with the Jones, but actually, he’s out fighting crime.

Not just any old crime, either. According to Riverman Media’s The Executive, he’s scaling rooftops and blasting through floors in order to take on a batch of mutants who have broken loose out of sheer frustration with a series of faulty vending machines. That’s what happens, apparently, when the machine in your office just won’t deliver the Mars a day as promised.

Yes, if you hadn’t already guessed, The Executive isn’t the most serious game out there in terms of its pitching, but it’s no throwaway experience, either. It’s actually a fairly complex and multi-faceted title, even if when it comes to actual gameplay, anyone watching on will think you’re engaged in some kind of poking and prodding war with your iPhone. 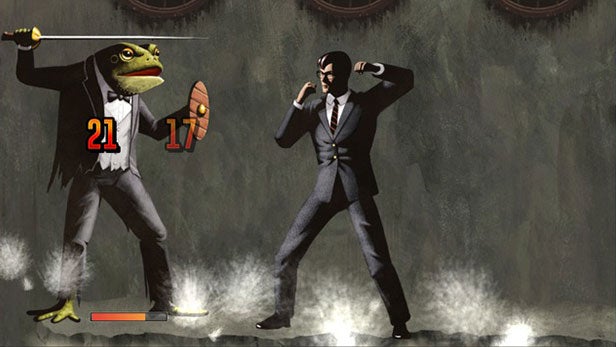 The base game is a fairly simple, but not always easy, beat-em-up. You tap on the top of the screen to punch, the bottom to kick and, when you’re unlocked them, a combination of swipes between the two to trigger special moves. Defence is a case of holding your finger on either the top or bottom half of the screen to block attacks on that particular area, and successful battles are a case of mixing up all of the above – attacking the area your opponent when vulnerable before defending yourself against revenge swipes in your direction.

Each actual battle – whether it’s a half man, half bear you’re fighting, a bat like creature fluttering in your eyeline or what looks like to be a lump of jelly formed from a square mould full of random limbs seemingly out for a chunk of your flesh – actually only lasts a few seconds (providing you survive), with stages made up of a few encounters mixed with QTE like action sections. That basically means running between said encounters by swiping in particular directions in quick time as instructed. Every facet of your play is then evaluated and graded at the end of each level, with funds dropped into your bank account accordingly. 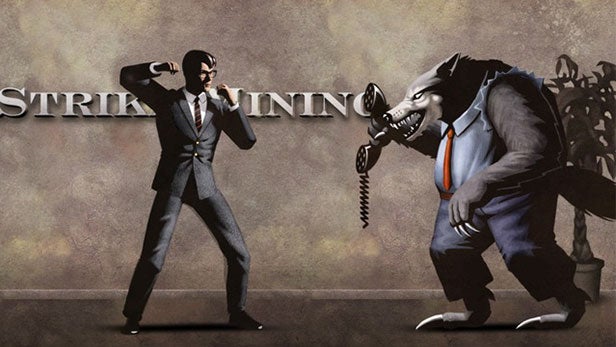 However, it’s how you spend these funds that, bizarre setting aside, is the most interesting part of The Executive. While you can put your dollars towards upgrades that strength your attack, defence, and unlock new moves, you can also invest them in a stock exchange of sorts, that sees more money head your way when you carry out particular tasks in play. As your stock rises, so do your funds and your ability to up your arsenal in play in line with the rising difficulty curve – a logical set up, naturally, but one delivered in an inventive way.

It all adds to the idea that, while the idea behind The Executive may seem comical, and the intentionally cheesy way in which the game is delivered only bolsters the idea that this is something of a joke, beneath the surface lays a well thought out, well structured game that, delivered in bits and pieces as it is, sits perfectly at home on smartphones. The play itself is so fast paced and random that the realisation that there’s not much to the battles themselves never really gets a chance to take hold. Before you know it, you’re breaking through panes of glass and dashing on to the next encounter, before spending your cash on upgrades and heading on back out to battle. 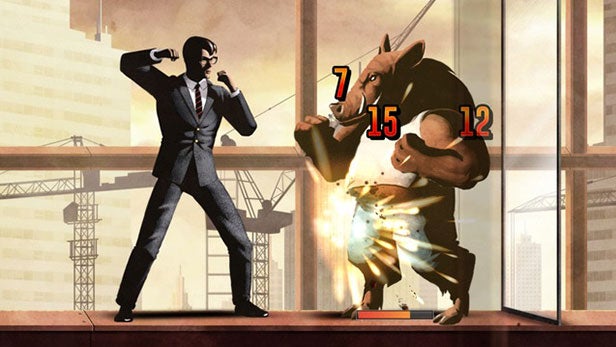 The whole thing leaves you a little dazed and confused and it’s hard to believe that this isn’t intentional. Nevertheless, while the 30 levels on offer here are action packed, once you’ve raced through everything The Executive has to offer it’s hard to image you’ll fancy going back to it any time soon. Either way, for what it is – a whole heap of mania – it’s especially good, and if you fancy a quick blast at something entirely off the wall, The Executive has exactly the right brief.

Verdict
Utterly manic and delivered by developers who were thinking entirely out of the box, The Executive’s fast-paced battles may not be the deepest encounters you ever come across, but the economy that sits behind it adds some weight to the package overall, which serves as the perfect blast of barmy action for those looking for a quick mobile fix.