Standing on the edge of a wooden platform, in front of me are two hands with chalked fingers wearing climbing gloves. Immediately above me is a series of handholds leading across a barren rock face. I daren’t look down. I’m already so high and I’ve not even started. The shimmering waves far below me, and the islands around me, already look like toys.

Even as I start my demo of The Climb, my palms are sweating. As I’m strapped into the Oculus Rift, my age-old fear of heights takes over as I attempt to peek over the edge at the scenery around me. But of course, I’m here to climb.

Crytek has been playing with VR demos for quite some time now. You might know of the Back to Dinosaur Island demo that was just released on Steam for the Oculus Rift DK2 developers’ kits. And then there was Back to Dinosaur Island 2, which was shown off at E3 2015 behind closed doors, where you had to scale the side of a mountain using a series of ziplines.

But now we know: all of Crytek’s demos have been leading up to two VR-exclusive games – The Climb and Robinson: The Journey, the latter of which was announced for the PlayStation VR in October.

The Climb is a VR rock climbing game that focuses on the absolutely terrifying/awe-inspiring free solo climbing. Yeah, that’s the kind of rock climbing that’s done without any ropes, harnesses or protective equipment whatsoever. It’s a sport that keeps you as close to nature as possible, literally hugging the rock for dear life in my case.

The aim of my demo is simple: make my way to the top of the rock, using the handholds available, passing through checkpoints, without falling off too much (which is a terrifying experience, let me tell you).

Although it sounds like a simple enough task, Crytek has managed to make the world so immersive and realistic that it feels intense and utterly real.

Movements are made by moving my virtual hands using the headtracking of the headset, looking at the handhold I want to grab. My VR hand opens up when it’s in range and then I press the appropriate trigger to grab (LT for my left hand, RT for the right). I find the hand positioning a little tricky at first, but it doesn’t take long to get into the swing of things.

As I make my way slowly along the first set of handholds, I’m presented with a pair of arrows. It turns out there’s more than one way to climb a mountain. Although this is one of the easiest levels in The Climb, Crytek’s Design Director, PJ Esteves, assures me that each climb can be tackled in a number of ways depending on your skill level. Anyone who’s not a total novice and a wuss will be able to perform more skilled manoeuvres and grabs, but there’s always a route that caters for baby’s first climb. 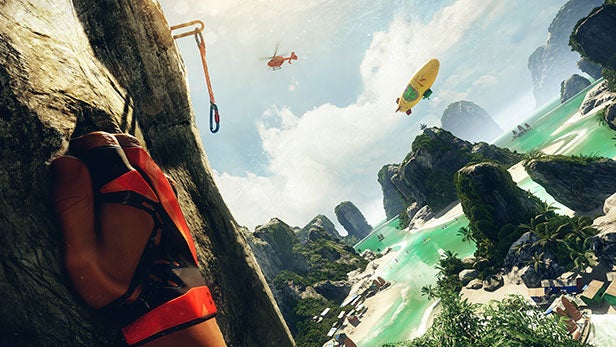 Just as I start to gain a little confidence in my basic climbing abilities, I face my next hurdle: jumping. The Climb, as in real-life free solo climbing, often requires you to leap from handhold to handhold when they’re not within immediate reach. Sounds easy, right?

Well, as I mentioned earlier, my head for heights isn’t so great. My first jump requires me to lean across a small chasm with my right hand outstretched across the gap.

I risk a quick look down. Even in VR a massive drop feels terrifying, my legs visibly trembling as I wait. I barely even notice the little butterflies flutter past my face through the greenery to my left.

To jump I have to look a little above where I want to aim for, pressing A and then pulling the appropriate trigger when I’m close to the ledge. It’s tricky and requires some precise timing. And yes, I plummet to my death first time (and a few times afterwards). But when I (eventually) land my jump, there’s a rush of relief, excitement and then terror as I realise I’ve got to keep climbing again. 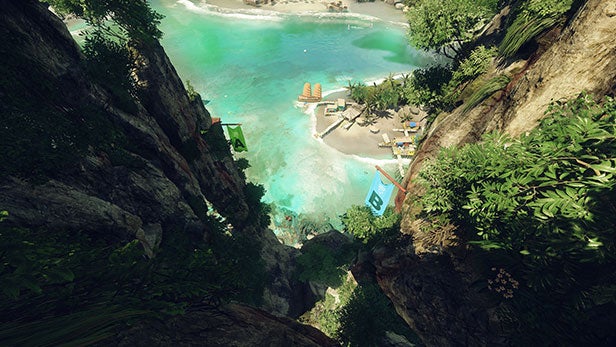 Every step I have to take in The Climb has been meticulously thought out by Crytek. I often have to swap hands on a hold to make the next move or take another run at a section in order to position myself correctly. But the more I play, the better I get. The more my confidence rises and the more addicted I become.

And there are so many elements to the experience that make it feel realistic and unique. My in-game fingers start to tremble and writhe if I stay in one spot too long, and I need to watch the white circle on my hands constantly. These indicate my chalk levels and with every move I make I lose a little chalk.

When my fingers start to get red and raw-looking I know I need to re-chalk them using LB and RB (LB for left and RB for right, as before). And it’s essential to do this often, as otherwise getting a grip becomes very difficult.

I also love the checkpoint markers. Crytek has made them out of dangling Quickdraws, which is a short length of rope suspended between two giant carabiners. They jingle satisfyingly as I pass them, and I almost want to grab onto them for comfort. 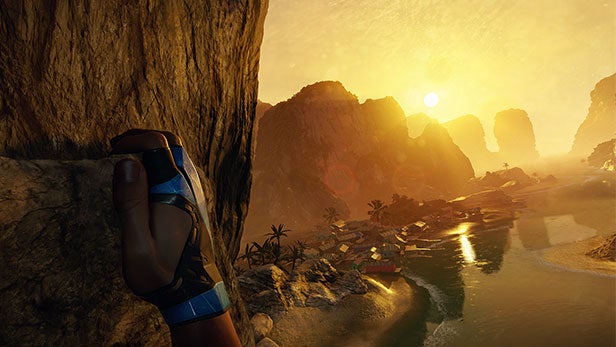 Every now and then I reach another wooden platform, hoiking myself up over the edge, feeling out of breath even in real life.

And this is when I get to appreciate the graphical detail of The Climb. Although it seems as if there’ll be a variety of locations across the prettiest parts of the world available in the full game, the particular climb I’m conquering is on a tall rock that juts straight out of the sea.

Around me is a small archipelago of islands, some with basic settlements on them; others covered in greenery. There’s often a sound of bird call in the air, but I’m so focused on the climb that I barely notice it until I stop to take check. Still can’t look down, though.

First Impressions
I’ve never had a VR experience where I’ve felt such a huge sense of achievement upon reaching the end. Standing triumphant atop the final platform and – tentatively – surveying the area is a powerful feeling, despite the fact that you only exist in the game as a pair of hands.

This is you versus the rock. Human versus nature. VR needs more games like this at launch. Experiences that take a real-world activity that you’ll probably never experience and put you right in the centre of it. It’s so emotionally engaging, and I emerged sweaty and triumphant from The Climb.

And next time I’ll be braver.