What is The Bureau: XCOM Declassified?

The Bureau: XCOM Declassified is a predictable reaction to the successful reboot of XCOM Enemy Unknown in 2012. It takes that game’s alien invasion setting and elements of its strategy gameplay, and bungs them into a more conventional action game.

It’s what X-COM Enforcer did 12 years ago and, just like that game, The Bureau: XCOM Declassified doesn’t entirely work. But it could have been far worse.

Rather than a strategy title like its father, The Bureau: XCOM Declassified is a third-person action game where each mission is some form of encounter during a US-wide alien invasion. You control a squad of troops, but do so from the perspective of a single commander on the battlefield, rather than a god-like figure abstracted from it, looking down from above.

Keen to give The Bureau: XCOM Declassified its own style, the game owes as much to B-movie horror films of the 50s and 60s as XCOM Enemy Unknown. Its ‘vanilla’ alien characters are the greys of Area-51 cliché, its male leads wear sharp suits, tie pins and hats. And its female characters in power have to withstand the light derision of an unenlightened patriarchy.

The Bureau: XCOM Declassified’s setting is charming enough, but its story is poor. In many respects, this is a seriously incoherent game – a patchwork of styles and elements that fit together awkwardly.

For a game with a poor story, there exposition is laid on thick – there’s a lot to wade through. Levels are littered with criminally uninteresting notes from anonymous characters about the invasion. And when not on a mission, you spend an awful lot of time rambling around your anti-alien defence force’s base talking to the various uninteresting characters, or listening to dull audio recordings from people you care even less about. 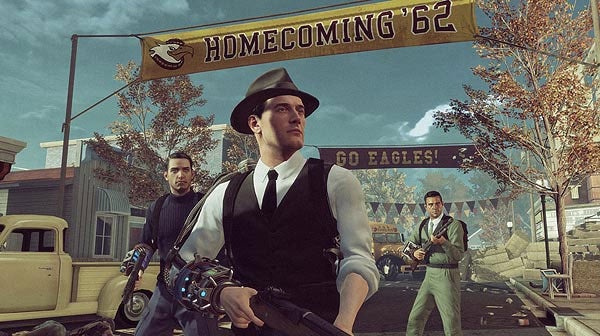 The Bureau: XCOM Declassified’s Earth is not one you’d feel too bad about being destroyed, were you not stuck on it. And, when a B-movie setting seems a perfect bed for referential humour, we were dismayed to find the Bureau an entirely humour-free zone.

The whole pulpy 60s premise is a great one, but the execution is faulty. And whoever wrote the thing appears to have little-to-no idea about how to pace a narrative.

Forgetting the finer elements of The Bureau: XCOM Declassified for a minute, a 60s setting makes a great backdrop for the action. Abandoned farms and ravaged little mid-America towns have much more personality than the grim and grey modern cityscapes we could have ended up with.

That the game is set across the Unites States means that the missions are somewhat atomised, but they all follow along the same lines.

You start each with up to three troopers. You always control agent William Carter and without taking control of your teammates into consideration, The Bureau: XCOM Declassified pootles along like a fairly standard cover-based shooter. Hide behind hay bales, shoot alien until he dies, repeat.

You can’t forget your team, though. Not only can you not generally survive without them, but they will certainly die without your help.

Once out of health, they fall to the floor like a baby tipped out of a pram. And if you don’t get to them in time to revive them, they die. For good.

Next
Strategy and Verdict Review