The Tannoy HTS-101 demonstrated the company’s enviable pedigree in the compact speaker systems market, delivering better sound quality than its modest £500 price tag would suggest. We’re hoping Tannoy can emulate the success of this great-value system with the follow-up, a £400 package that goes by the name of TFX – and TrustedReviews has been granted the world’s first review. 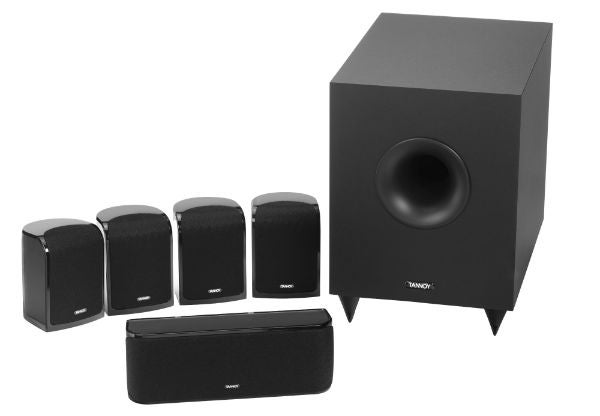 TFX is the evolution of Tannoy’s SFX system, its best-selling budget speaker range ever. This updated version adds new, improved drivers, restyled enclosures and a revised subwoofer, all of which are designed to handle the rigours of today’s Blu-ray surround sound formats.

It’s a similar proposition to the HTS-101, offering a set of four compact, upright satellites for the fronts and rears, a horizontally-aligned centre speaker and a powered subwoofer. It’s all shoved in a single box, making this a quick and convenient way of getting a tonally-matched speaker system that won’t dominate your living room.

The 131mm-high front/rear satellites are immensely attractive. A gloss black finish is always a winner, but the standout feature is the curved rear and top section, which makes them more elegant than the HTS-101 and many other sats in this price bracket. They’re chic and modern, particularly when perched on the optional floorstands or mounted on the wall with the supplied brackets. The system also comes in a less eye-catching white finish.

They also have a solid, weighty feel in the hand, which isn’t always the case with budget all-in-one speakers – although we think the Cambridge Audio Minx system is superior in terms of build and styling. 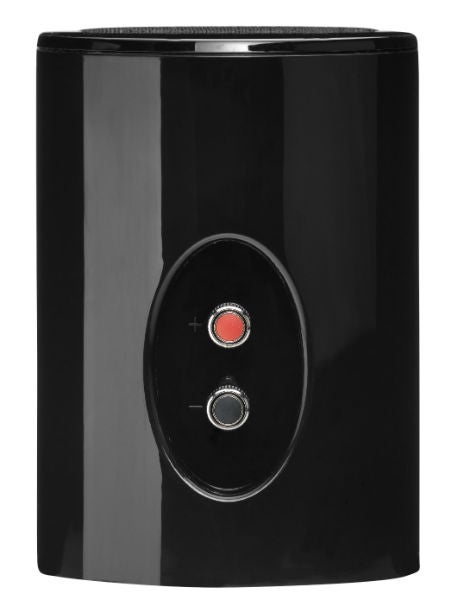 The one aspect of the TFX that disappoints is the size of the binding posts on the back. Accessing the holes and threading the cable is tricky because the holes are small. The supplied thin cables make things easier, but if like us your cables are quite thick then you’ll need to wind the ends up pretty tight.

The centre channel shares the same curved back end, robust build quality and fiddly binding posts, and at 260mm wide it’s not going to demand much space under the TV. And although the TFX subwoofer eschews the curves and gloss-black styling of the satellites for a textured matt finish, it’s easy on the eye and is relatively compact. It comes with large spikes that screw onto the bottom.

The satellites feature a 75mm paper cone driver for midrange and bass, and a 15mm titanium dome tweeter with a neodymium magnet. Their curved rear end is about more than just aesthetics. This redesigned enclosure works in harmony with the new drivers and crossover upgrades, aiming to ‘eliminate standing waves in key frequencies’. 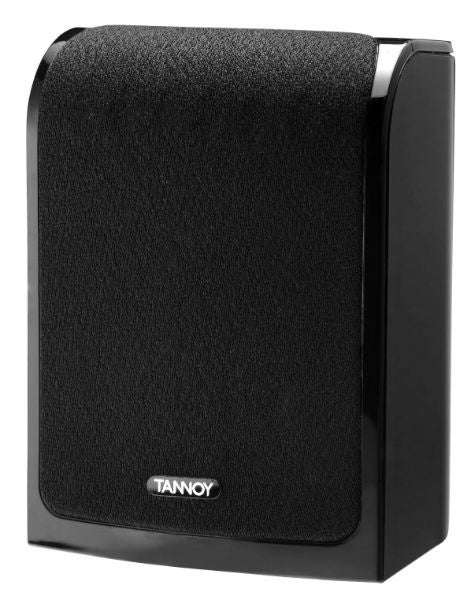 The polymer used to make the cabinets has been enhanced to more effectively damp the enclosure, while tweaked internal bracing aims to deliver greater punch. The satellites also feature Tannoy’s WideBand technology, which enables the tweeter to reach high frequencies up to 78kHz, well above the upper range of Blu-ray’s audio formats and our hearing. 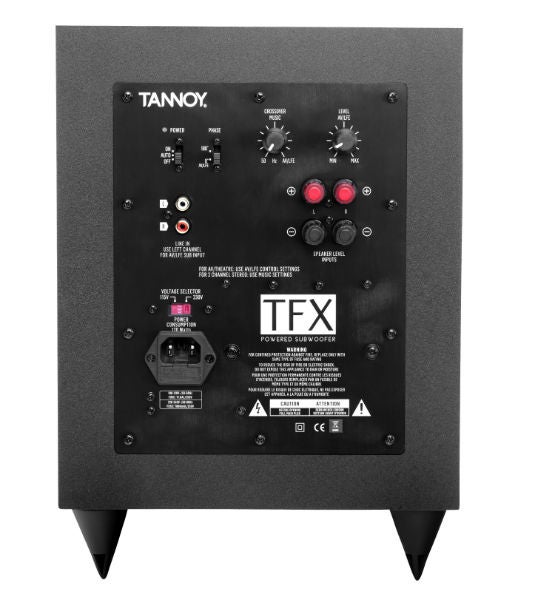 The subwoofer’s bass tones are mustered by a 100W class A/B amplifier and a long-throw 200mm driver. Its performance can be tweaked on the rear panel with dials controlling crossover and volume, plus switches for flipping the phase 180° and selecting the power mode (on/off/auto). Connections include stereo cinch and speaker level inputs.

We auditioned TFX with our faithful Hellboy II Blu-ray, and after a rigorous workout with the movie’s key test scenes we couldn’t help being impressed by this nimble and surprisingly potent little system. 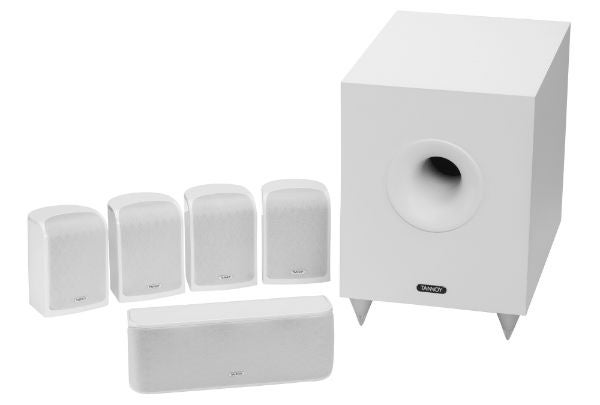 The clarity and crispness of the sound is instantly apparent, making high-frequency effects like smashing glass and rustling leaves sound realistic but without a trace of brightness or harshness. When the Elemental hurls a car at the helicopter in chapter 12, the creature’s screech and the resulting explosion are handled with pleasing composure – some systems pierce your eardrums with this bit.

This natural, easy character continues even when we push our Onkyo amp to anti-social levels. Midrange reproduction passes muster too, allowing the centre speaker to articulate dialogue clearly and naturally. The sats and sub integrate well, providing a tightly locked, cohesive soundstage, and the subwoofer does more that pump out shapeless rumbling – there’s real variation, nuance and dexterity to its bass tones. 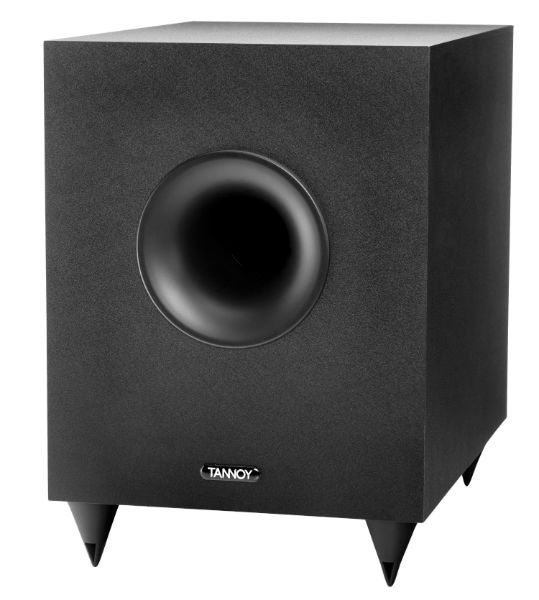 During quiet moments, TFX does a decent job of teasing out the finer points of the soundtrack. When we first enter the Troll market, the dizzying array of delicate sounds whizzing around the soundstage is spellbinding. It may not dig out the very last iota of detail but at this price the amount of texture it reveals is remarkable.

TFX can also flex its muscles when it needs to – Hellboy’s fight with Wink at the Troll Market is beautifully staged. Listening to the vigorous effects, the enthralling interplay between channels as characters fly through the air and the  taut bass that backs up every kick and punch, it’s hard to believe that it’s all coming from such a compact and affordable system. We’re not sure it has the lungs to fill a massive room, but for average-sized spaces it’s up to the task.

Verdict
A speaker system that offers sound quality this good for just £400 can only result in an unequivocal thumbs-up, and that’s exactly what the Tannoy TFX gets. Much like its stablemate, the HTS-101, TFX shows remarkable sonic poise for a sub-£500 system, plus solid build quality and a stylish design make it a chic addition to your living space. Our only gripe concerns the fiddly speaker connections, but when that’s the only negative you know you have a winner on your hands.