Squeezing hefty tower speakers into a small living room can be difficult, but thankfully Tannoy is here to save the day. Its HTS series is designed to offer high-quality sound from compact, stylish speakers that only take up a fraction of your space. Tannoy describes it as ‘the ultimate no compromise system’ which means that even though the speakers are small, you’re supposed to get the same large-scale sound you’d get from bigger speakers. Let’s find out if they deliver on that promise.

The system comprises four satellites, a centre speaker and the HTS Subwoofer. The sats can be bought separately without the sub as the HTS 5.0 package, but the HTS-101 offers a more cost-effective way of getting a complete system. However, should you have space for towers (which in theory should garner a superior sound) then the step-up HTS-201 package replaces the front satellites with two 904mm-high floorstanding speakers.

The HTS-101’s four identical satellites for the fronts and rears measure 106(w) x 160(h) x 142(d)mm, which isn’t likely to affect your feng shui when placing them around the room. And if you want to get them up and out the way, they can be wall-mounted using the supplied brackets. The satellites boast luxurious build quality too – picking one up reveals that they’re fairly heavy (always a good sign) with a weight of 1.4kg, largely due to the high-density real wood fibre cabinets, which is unusual at this price.

Tannoy has also styled them in a deep gloss black finish, giving them a modern-yet-classy look, and the grilles can be removed by pulling them from their plug fixings. There’s nothing particularly radical or elegant about their boxy shape (aside from a slight taper towards the back), but if you’re looking for speakers that will blend discreetly into their surroundings these could be just the ticket.

The centre speaker is slightly larger at 250mm wide to accommodate an extra driver and aligned horizontally, but it’s styled in exactly the same fashion. All five speakers feature a pair of robust binding posts on the back. The HTS Subwoofer is positively gargantuan compared with the sats (measuring 275(w) x 420(h) x 370(d)mm) and therefore isn’t easy to conceal, but its gorgeous gloss-black finish demands to be seen, plus all of the clutter is kept hidden on the back panel. It also comes with pre-attached spikes.

Let’s talk technology. The satellites feature a single 75mm paper cone mid-bass driver, above which sits a 19mm titanium WideBand dome tweeter. The use of titanium is said to deliver a cleaner and more accurate frequency response than soft dome tweeters (hence ‘WideBand’), allowing it to reach frequencies of 40kHz and over – perfect for reproducing hi-res Dolby TrueHD and DTS HD Master Audio soundtracks. It’s driven by a neodymium magnet system, the strongest known type of permanent magnet. Tannoy recommends feeding them between 25 and 100W of power and they reach down to a frequency of 100Hz, although their smooth roll off should allow them to blend seamlessly with the subwoofer. 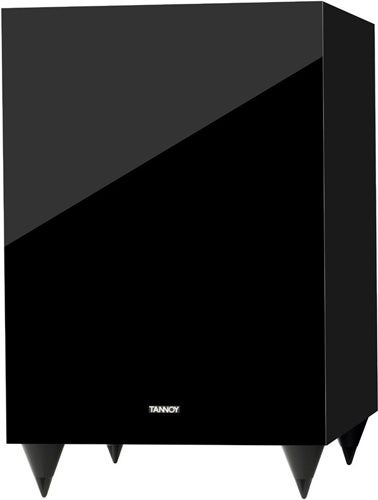 The centre speaker is voice-matched using the same drivers as the other sats, except that it boasts two 3in mid-bass drivers to give dialogue extra depth.

Lurking inside the active subwoofer is a downward-firing 8in long-throw driver and a 100W amplifier, and on the back is a helpful array of controls. Two dials at the top control volume and frequency crossover from 50Hz to 200Hz, and there’s a switch for flipping the phase 180 degrees. 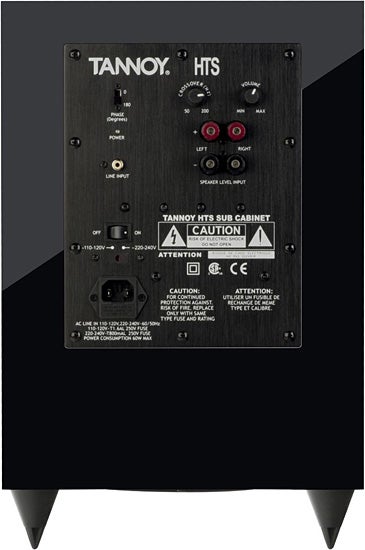 You also get a line level cinch input and two pairs of speaker-level binding post inputs. A power switch completes the line-up, backed up by an auto power feature that allows you to leave it in standby and it will wake up when a signal is detected.

To get the party started we fired up old favourite Avatar and flipped to the ‘Assault on Home Tree’ chapter. It laps up the DTS HD Master Audio track, conveying the scene’s delicious sound design with a richness and power that belies the speakers’ compact size.

Missiles scream across the screen with a crisp, bracing hiss and hit their targets with a deep, muscular boom. The score pushes the action along with pace and urgency, with the top-end rasp of the brass section cutting through the chaos clearly. The flurry of panicked Na’vi voices pierces the air from every speaker as gas canisters send them scattering, while the thuk-thuk-thuk of helicopter blades smoothly pans around the spacious, expansive soundstage.

It’s enthralling stuff, but we still can’t get over the incredible sense of scale you get from such small speakers. The satellites handle ear-splitting effects without batting an eyelid, and convey dynamic shifts with exceptional speed. High-frequency detail is also beautifully crisp during noisy and quiet scenes – as characters explore the forest, the distant, delicate sound of wildlife and the crunch of leaves underfoot is exquisite.

Also impressive is the subwoofer, which interlocks tightly with the satellites with bass that really packs a punch but never threatens to swamp the soundstage. It’s right up there with the best in this price class, sounding every bit as taut and powerful as Teufel’s recent Consono and Columa sub, and even gives subs from pricier systems a run for their money. Top that off with rich, authoritative dialogue from the centre channel and you have a home cinema performance that’s a lot more impressive than its price tag would suggest.

Many speaker systems at this price are well equipped for movies but fall down at the first hurdle with music. Not so the Tannoy HTS-101. We played a live performance of ‘They Can’t Take That Away From Me’ by Jane Monheit and John Pizzarelli and the results are impressive. It conveys Monheit’s voice with surprising texture and detail, while the piano, brush drums and hats are sparky. It’s perhaps not as neutral or smooth as some rivals, but judged in the context of its price it’s a more musical system than you’d expect.

The Tannoy HTS-101 is one of the best-value speaker systems we’ve had the pleasure to test. If your budget is tight but you don’t want to compromise on quality then this system finds the perfect middle ground, delivering a performance that belies its price tag. What’s most impressive is the sheer size of the sound produced from such small speakers – with major action scenes it sounds thrilling, powerful and detailed, helped along by an excellent subwoofer that by rights should have no place in a system as affordable as this. Tannoy, we salute you.