If you're looking for an affordable wireless speaker, you'll likely find better-sounding options than the Pebble Splash around this price. While its build quality and understated looks are a plus, audio performance is lacking in areas, especially when viewed next to the original Wonderboom

The Pebble Splash is a Bluetooth portable speaker from Danish brand Tangent. Water-resistant to IP57, it boasts 10 hours of battery life and a built-in microphone for voice calls when connected to your smartphone.

Tangent is a Danish hi-fi brand, one that you may not have heard much about, but it’s been around for more than 20 years.

Boasting expertise across a range of hi-fi products, one of the company’s more affordable offerings is the Pebble Splash Bluetooth speaker that aims to produce great sound from a small and convenient package.

One look at the Pebble Splash and you likely won’t be surprised to learn that it was made by a Danish company. The Pebble Splash has a rather understated air to it, eschewing the design flourishes of more trendy portable speakers for a look that feels like it was intended to fade into the background. 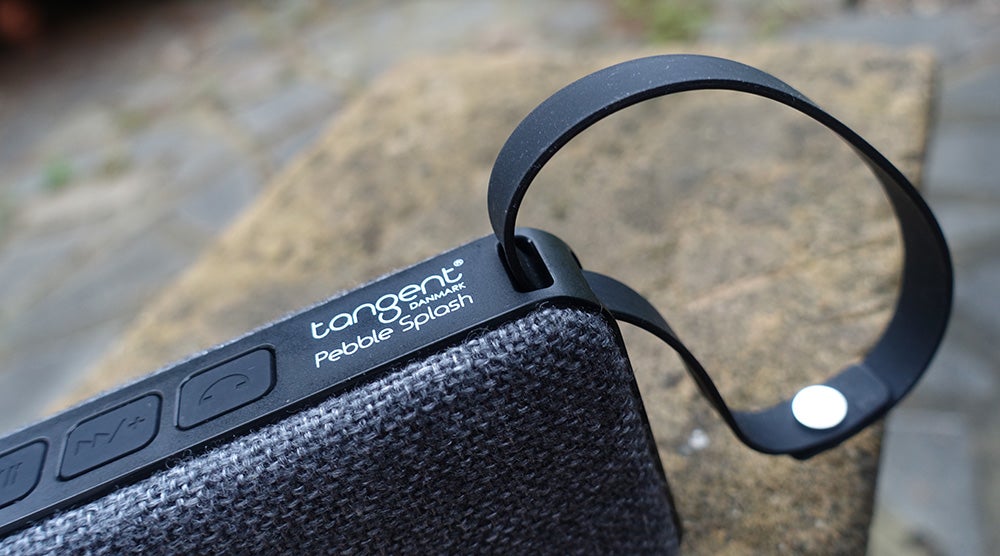 Its rectangular shape is something of a deviation from the circular form most portable speakers opt for, packaging 2 x 5W drivers into its slim frame. There’s a carry strap on one side that you can unclasp for a tighter fit, or add to a trouser belt/rucksack if you want to take it on your travels.

Build quality is decent, avoiding that cheap-feel that you can get with speakers at this price. The woven material on the speaker’s front and back make it look like it’s wearing a jumper you’d see in a Nordic noir TV series. It’s quite smooth and nice to touch, too. 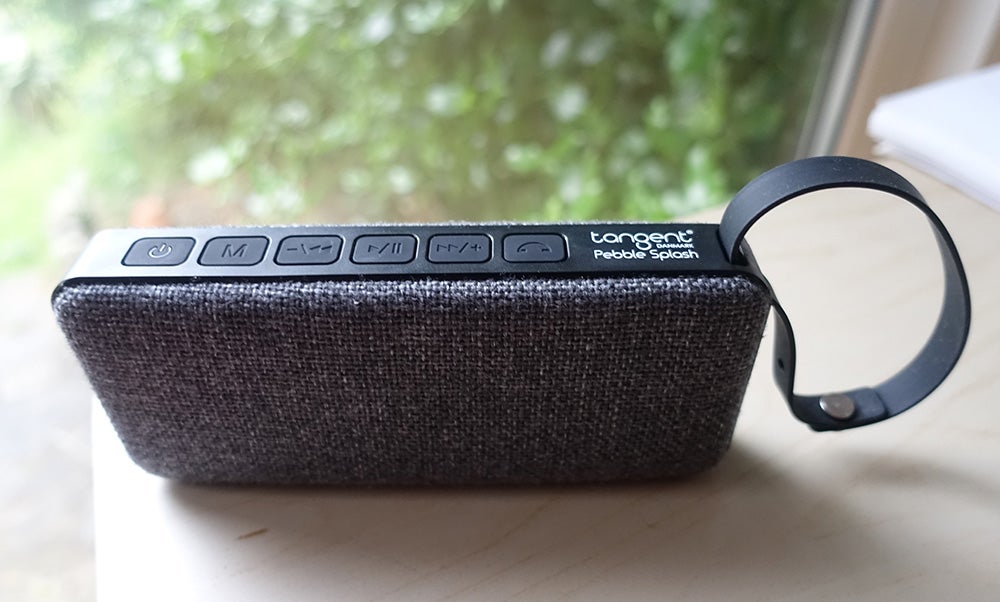 On top of the speaker are the power, Bluetooth pairing, playback/volume and Call mode buttons. The playback buttons are the same as the volume units, but Tangent has differentiated between the two through the volume buttons requiring a longer press (as does turning it on and off). Usefully, you’ll hear a “click” sound, which helps communicate whether you’ve pressed the button or not.

Battery life is around 10 hours, although the Tangent website states 8 hours. Either figure is decent stamina for a speaker of this size and price, although more juice can be squeezed out of the unit by knocking the volume down to about 50-60%.

Again, there’s conflicting info about charging time, with Tangent claiming it takes around 6 hours to fully charge, which is excessive. After depleting the battery, the Pebble Splash was back up and running in 3 hours. 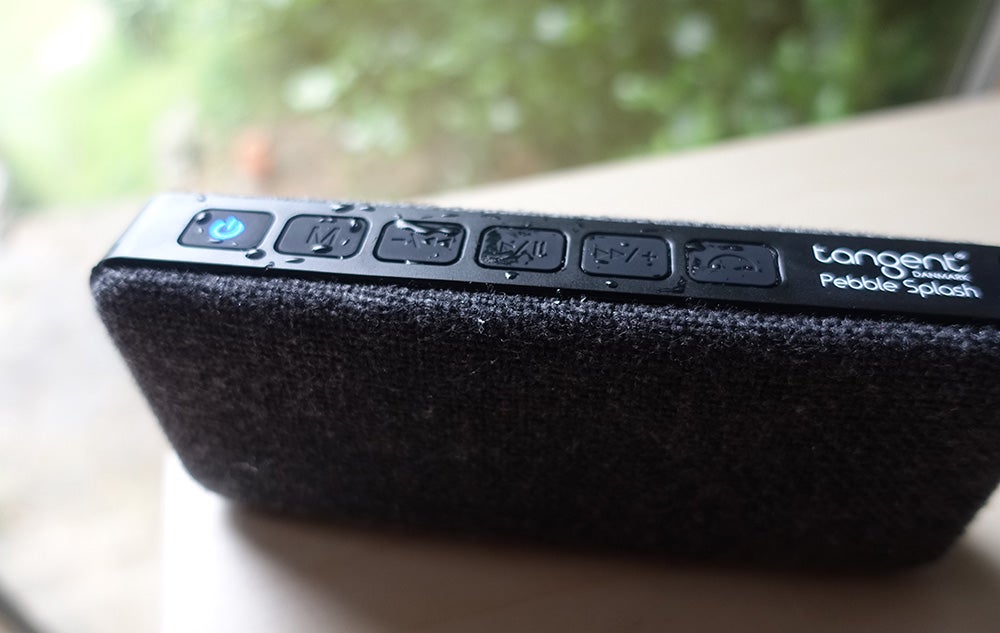 The Pebble Splash is waterproof up to IP57, which means it will survive being dunked in a metre of water for short periods of time, and can resist the odd speck of dust but isn’t completely dustproof.

Inside the speaker you’ll find a built-in microphone, which is useful, I suppose, if you wanted to connect to a smartphone and use the speaker for hands-free conversations – although I never feel this is a feature that’s used much by anyone. Tangent’s website also suggests using the device for conference calls in a business setting, which is a slightly odd feature to highlight but may explain some of the traits behind the speaker’s overall sound – more on that later.

The Pebble Splash’s features are rounded off by a couple of connections located beneath a flap on the left-hand side. There you’ll find a micro-USB connection and a 3.5mm jack. It’s Bluetooth version 4.0 here, and you can stray about 10 metres away before the connection drops.

Fire up the Pebble Splash for the first time and it produces a sound that’s distinctly underwhelming: thin, distant and not what you’d expect given Tangent’s marketing spiel about the Pebble Splash offering “great sound”. A few days of running in and things improve – not by a huge amount, though.

Where bass is concerned, the Pebble Splash puts in a rather meek performance. Take the beats laid down in Lupe Fiasco’s “The Coolest” and they come across muffled and weak. 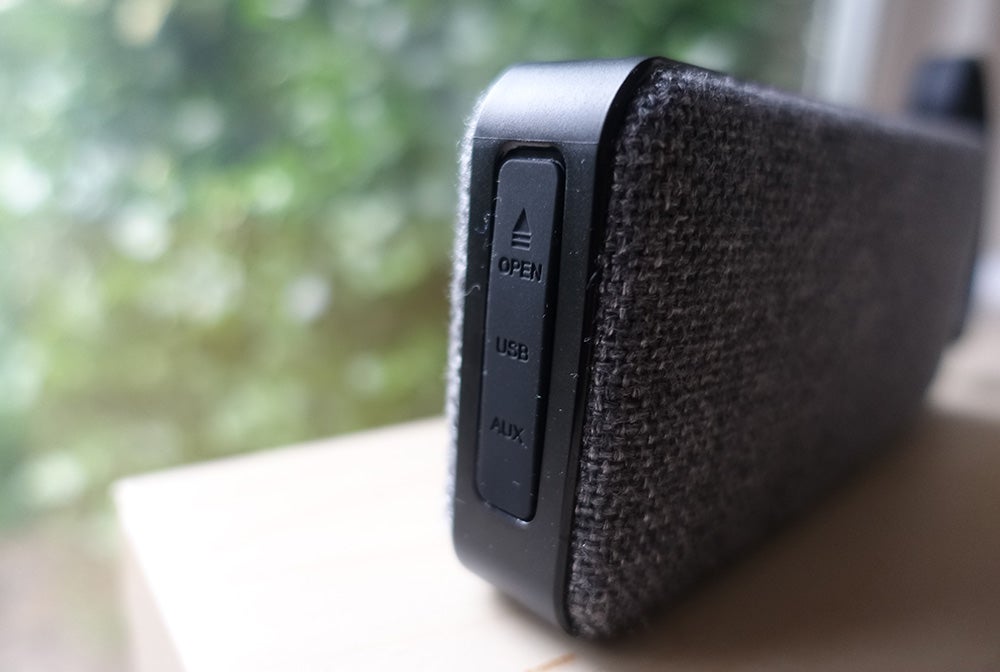 Play Electric Light Orchestra’s “Mr Blue Sky” and the performance is generally fine, but it lacks heft and separation, with the soundstage coming across condensed. Compare it to the original UE Wonderboom and it lacks some of that speaker’s clarity and confidence.

Its performance with vocals is good, although they lack warmth when it comes to music. Switch to podcasts and the Tangent renders them with a decent sense of clarity. It isn’t a speaker that can mask the imperfections of an iffy recording, and it can sound harsh and revealing at times.

The Pebble Splash can go loud and fill a room, although the more you nudge up the volume, the less composure and control it exerts – especially in terms of detail and dynamic range. Give it a track such as Muse’s “United States of Eurasia” and things perk up a bit. While it isn’t the most nuanced of sounds, the energy and vocal performance of Matt Bellamy is decently rendered, suggesting it works well with some genres of music but not all.

Why buy the Tangent Pebble Splash?

The Pebble Splash is best described as being simply “okay”. While it’s up to snuff in some areas, it isn’t the most confident of performers and doesn’t work as well across a range of music genres. Overall, it lacks the star quality to shine out in a crowded field.

If you’re looking for a portable at the more affordable spectrum of the market, then there are better-sounding efforts available at a similar price.