So the software impresses even if the hardware seems middling, but faith will be restored when you get started.

The DS115j doesn’t have Synology’s popular tool-less drive install, instead the chassis opens down the middle and a drive must be screwed into the available slot, but it still only takes a few minutes. 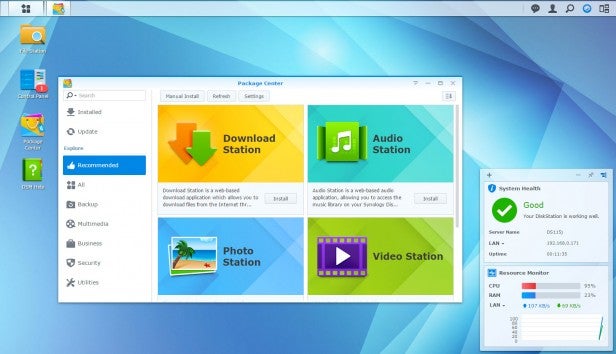 More to the point after the drive is installed Synology’s famed setup process takes over and it works like a dream. Once booted and connected to your network either go to a browser and type ‘find.synology.com’ or download the ‘Synology Assistant’ tool from the company’s website and it will detect the NAS in seconds and begin the setup wizard.

The wizard will confirm your choice of username, password and RAID (somewhat irrelevant with a single drive), automatically update the firmware and format the drive. You will be up and running in 10 minutes whereupon you are given a guide of the UI. It remains the benchmark to which all other NAS makers still aspire.

As such the DS115j may not be the sexiest of NAS, but it delivers on substance and when it comes to performance it also excels. 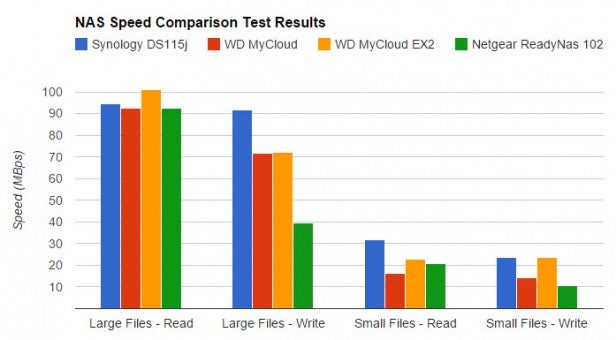 Transferring large files across our test network resulted in superb read and write speeds of 94.6MBps and 91.6MBps respectively. As the comparison graph shows, this puts the DS115j amongst the fastest read results we’ve had for budget NAS both with single (My Cloud) and dual drive bays (My Cloud EX2 and Netgear ReadyNAS 102). Furthermore write times leap ahead of the competition which is further testament to the scalability of the Armada 370 chipset.

The DS115j also showed its metal with our CPU-stressing small files test which pushes a 2GB folder of over 2,000 files across the network. The average read speed of 31.8MBps is nearly 30 per cent ahead of its rivals and virtually double what we got from the single bay WD My Cloud. Meanwhile its write speeds obliterate all but the dual bay My Cloud EX2. 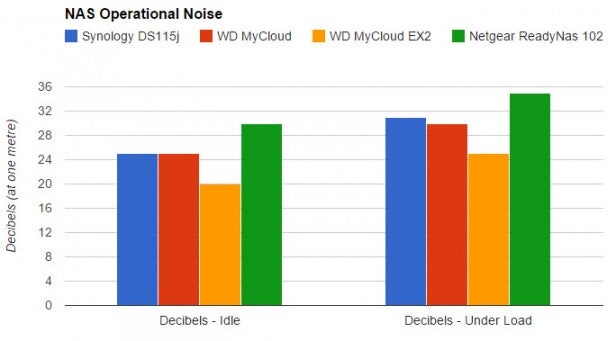 When it comes to noise, the DS115j also does well. Much will depend on your choice of hard drive, but the WD Red drives we use in testing produced lows of just 25db at one metre and highs of 31db at the same distance. This keeps the NAS living room friendly, competitive with its rivals and notably ahead of the Netgear range whose Achilles heel has long been noise. 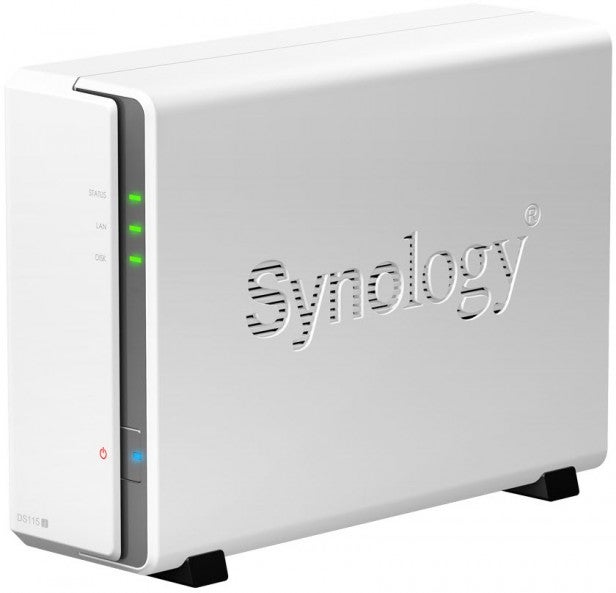 Should I buy the Synology DS115j?

Based on looks alone the DS115j’s obvious rival, the WD My Cloud, has the edge but Synology’s offering has far greater functionality and much faster performance. A snag is the asking price. At just £91 the DS115j is undoubtedly value for money, but the My Cloud has integrated storage which works out even better at 2TB £130, 3TB £160 and 4TB £190 and cheaper prices can be found online.

Buying an equivalent internal 3.5in HDD for the DS115j will work out slightly more expensive and you have to fit it yourself. That said for the performance and functionality benefits we’d argue it is worth it. Of course a two bay system will give you data redundancy, so the otherwise inferior Netgear ReadyNas 102 at £119 unpopulated remains tempting.

While we always have some reservations about recommending single bay NAS due to their lack of data redundancy there is no doubt that the Synology DS115j sets a new benchmark for the budget NAS sector. It may not have the looks of main rival the WD My Cloud, but it is superior in both functionality and performance while offering strong value for money. Synology has another winner on its hands.