What is the Synology DiskStation DS216?

In Synology’s huge range of network-attached storage (NAS) devices, the two-disk DS216 is billed as a budget option for a small office. It’s more expensive than Synology’s home-orientated DS216j, but it’s quicker and has useful extra features such as hot-swappable hard disks and one-touch copy from flash drives to the NAS.

This is a two-bay NAS, so your data is protected if one disk fails, and it supports 3.5in hard disks as well as 2.5in hard disks and SSDs. Since it’s an office model, it has a quick processor to help with fast file transfers: a dual-core 1.3GHz model, compared to the 1GHz chip in the DS216j.

You’ll also find one USB on the front and two USB 3 ports on the rear, to plug in hard disks, TV tuners or wireless dongles, along with Gigabit Ethernet. The DS216 runs the latest DSM 6 operating system, which provides a friendly, mouse-driven interface that you can access through a web browser. 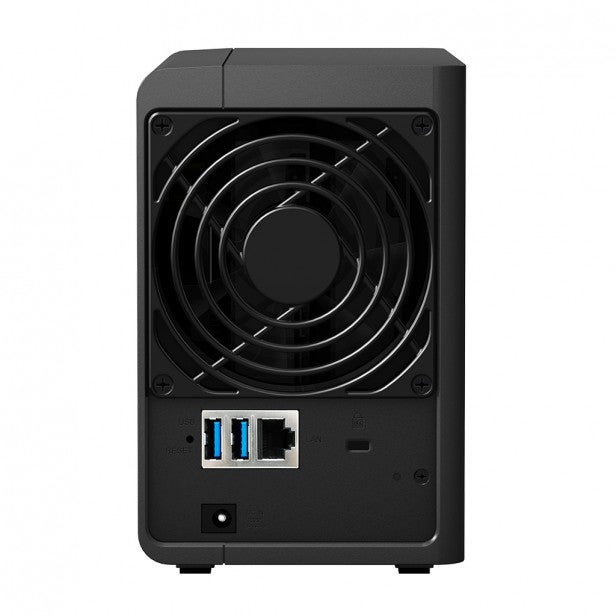 It’s a plain-looking NAS, with a no-nonsense matte black case; this is in contrast to the shiny white plastic of the home-orientated models. It does feel like it won’t pick up scratches too easily, and the shiny faceplate adds a touch of style.

The provided quick-start guide is pretty minimal, but the NAS does make life easy for you during setup. For a start, there’s no screwdriver needed here: just pop off the front panel, slide out a drive tray and clip your 3.5in hard disks into place. Everything is labelled, too, such as “up” printed on the drive tray so you get it the right way around. Screws will only be needed if you’re fitting 2.5in hard disks or SSDs into the trays. 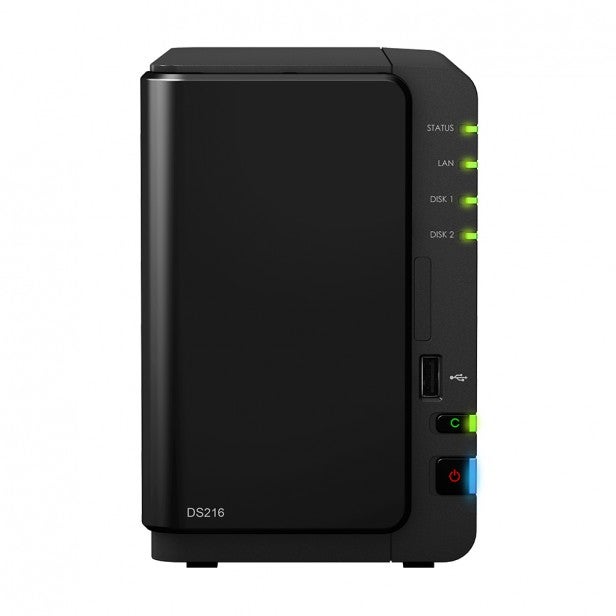 Once the disks are fitted, simply plug the NAS into your router with the supplied 1.5m network cable, power it on and go to find.synology.com from a web browser. This will search for and connect to your NAS, and you then just click the big disk icon to download and install the latest version of the DSM operating system directly to your NAS. 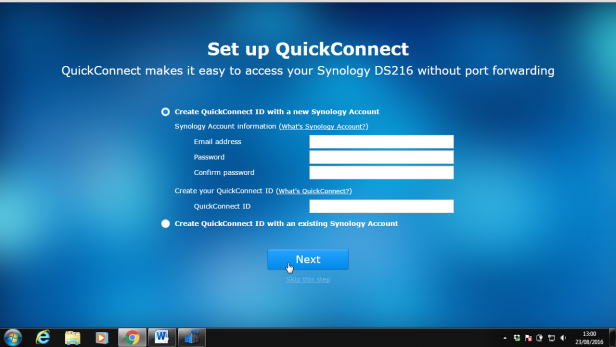 A wizard will then take you through setting up an administrator account, and asks you to choose a QuickConnect ID. This is particularly useful for accessing the NAS from mobile apps, since you don’t need to remember its IP address on your network. It also lets you access the NAS interface over the internet, away from your home network. There’s was no fiddling with the router required to get this to work, either – even with UPnP disabled.

By default, the NAS sets its two disks as a Synology Hybrid Raid (SHR) array, which can tolerate the failure of one disk without data loss. It also sets up shares for music, photos, videos and a generic “home” folder. You can access these with the NAS’s IP address, but it’s much easier in Windows to just press Windows-R to bring up the Run box and type the NAS’s name as a network share, such as \ds216. It’s also possible to map any of the shares as network drives in Explorer. 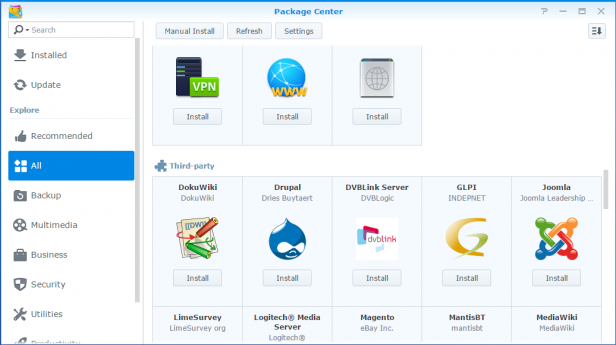 The NAS interface makes it easy to tweak this setup. Even those who aren’t familiar with NAS drives will feel relatively at home with the windowed interface. Everything is made simpler with a series of wizards that set up new shares and users, assigning them appropriate read and write access – and, if you wish, disk space quotas. There’s no need for any knowledge on Linux file permission flags, which is a blessing.

The DSM operating system is immensely powerful, with a bewildering array of apps that you can install from the Package Center. These cover anything from running your own mail server or Drupal CMS, to your very own personal wiki.

Synology does have a selection of its own apps that it recommends you install during the initial setup process. These apps cover the standard home or office NAS tasks of backing up your files and sharing photos, video or audio around your network. 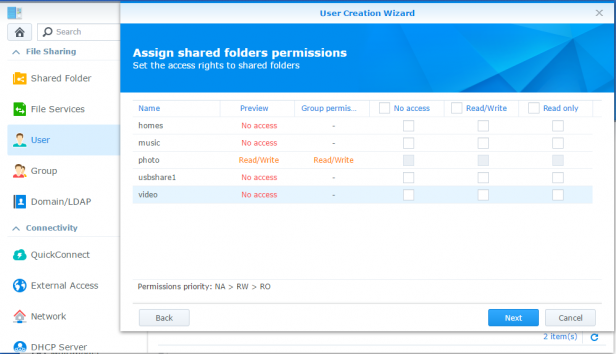 I installed Cloud Station (for backup), along with Audio Station, Photo Station and Video Station. Cloud Station works in conjunction with an application on your Windows or Linux PC or Mac. It was easy to set up and synced new and changed files straight to the NAS.

Audio Station provides a simple web interface to play your audio files from the NAS, but is really designed to be used with the Android or iOS apps. I found the Android app to be fast and it worked well with large music collections, but I missed the ability to sort albums by artist name.

Photo Station works well through a web browser, providing a slick interface to view your photo collection, and I didn’t have any complaints about the Android app, either.

Video Station is a different matter. Unlike Photo and Audio Station, you can’t just view content in your Video folder straight away. You first have to add a shared folder to a library, such as Movies. Each time I added a new file to the Video folder, it took around 10 minutes to show up in Video Station, and a 1.2GB rip of a DVD wouldn’t play back smoothly through the Android app, even when I was next to the router. 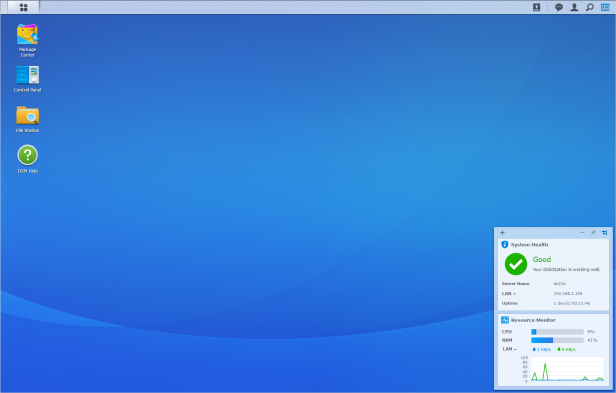 I didn’t get on with Video Station, but the NAS has a UPnP media server enabled by default. This means you can use an alternative mobile app, such as the excellent BubbleUPnP, to stream audio and video from your NAS. With BubbleUPnP, I exxperienced smooth video playback on my phone and a more fully featured music player than DS Audio.

If you plug a USB hard disk or flash drive into the DS216, this will then be shared over the network. You can also use the DS216’s File Station app to copy files to and from the disk using your web browser. I found this a super-quick way to load hundreds of gigabytes of data onto the NAS after initial setup. 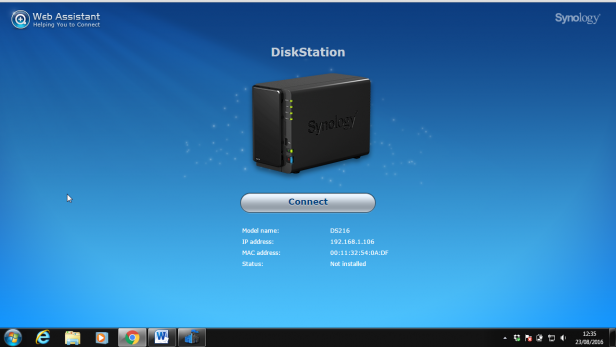 The DS216 also has a button marked “c” on the front, which will automatically copy the contents of any drive plugged into the front USB port to the NAS’s internal storage. I found this worked fine, but bear in mind that if you want the NAS to read exFAT disks (a popular format for high-capacity flash drives) then you’ll need to buy a $4 Synology app.

Annoyingly, the front USB port doesn’t use USB 3.0 and instead transfers only at USB 2 speeds. This is a faff when you want to transfer a huge number of files quickly.

The DS216’s interface ran far more smoothly than that of my home DS212j from 2012, which gave me high hopes that the fast processor would lead to some impressive file transfer speeds.

This proved to be the case. My speed tests used the Windows command line Robocopy tool to copy three sets of test files between the NAS and a RAM disk on my test PC over a Gigabit Ethernet network. The test files were 500MB of mainly sub-100KB documents, 500MB of JPEG photos between 2MB and 5MB, and a single 570MB video file.

TrustedReviews‘ testing methodology has changed since we reviewed the DS216Play, so these results aren’t completely comparable. However, the Play model appears to manage small files slightly faster than the DS216, but large files slightly slower.

Should I buy the Synology DS216?

The DS216 is easy to set up and use, has a polished operating system and sky-high file-transfer rates. You’ll need to think carefully about whether you’d be better off with a different NAS from Synology’s own range, however.

The home-orientated DS216j has the same dual-core processor as the DS216 but it’s clocked at a lower 1GHz speed. As a result, file transfers won’t be as quick, and you’ll lose the direct USB copy function and hot-swappable disks.

Otherwise, the NAS devices are highly similar, and the DS216j is £80 cheaper. There’s also the DS216play, which costs an extra fiver and has only one USB 3 port – but it features a storming 1.5GHz processor, 1GB of RAM and support for hardware video transcoding.

The DS216 is an excellent NAS. If you’ll mainly use the drive to store and share files at high speed across your network, this is the model to buy. If outright speed is less important, you should save yourself a packet and opt for the DS216j instead.