What is the Buffalo LinkStation 520D?

Cheap NAS devices are great for households that have basic storage needs and a relatively small number of files they need to access on a regular basis. The Buffalo Linkstation is one answer to this, providing reliable and simple network storage that you can set up in next to no time at all.

As NAS systems go, the Buffalo LinkStation 520D is pretty small, packing in a pair of 3.5-inch hard disks with capacities ranging from 2TB to 8TB. Given the more hefty size of some alternate NAS units, this is a blessing. The design is plain and unassuming, which is probably what most people want from a device that will spend most of its life hidden.

The Buffalo LinkStation 520D is a doddle to set up. It’s sold in configurations with hard disks pre-installed, and in  a version without disks called the LinkStation 520DE. 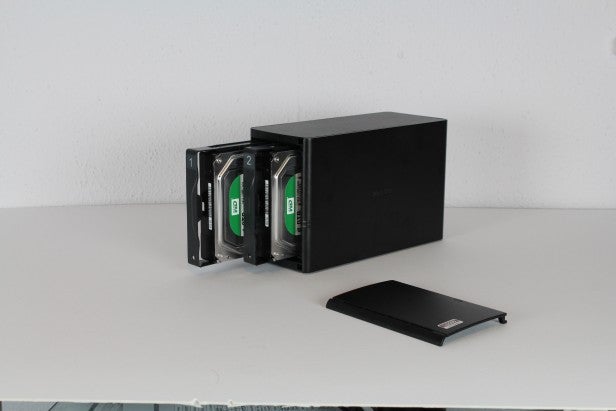 Gaining access to the disks is easy; a quick tug of the plastic mounting bracket is plenty to remove the front of the unit. My populated version came with two 1TB Western Digital Green hard disks, although the smallest capacity available online right now consists of two 2TB disks.

While a NAS sold with disks pre-installed might be somewhat restrictive, and therefore push the more technically minded towards the diskless unit, opting for the former means you can be up and running as soon as power and ethernet has been connected – certainly a benefit for users who want network file storage with minimal fuss.

It’s never long before the name Synology pops up in discussions about NAS units. With a seemingly endless chain of products catering for all price ranges, the company has done a great job of capturing much of the NAS market. This is down to a combination of good hardware, great software and a sprinkling of effective marketing.

Other manufacturers aren’t standing still, however, and it’s great to see that Buffalo has followed suit with its LinkStation 3.0 software, which uses a similar graphical interface for tweaking various settings and features.

It’s a cut-down Linux OS, with windows that can be moved around and resized, filled with various icons that open up pages of settings. There’s a status bar at the top showing the time and a few links to various function of the NAS. You can change the theme, adjust the icon grid, and the size of the text. Notably, there’s also a movable dock-like window, to which you can pin shortcuts.

It all works very well, and while it lacks the in-depth customisation options provided by the likes of Asustor and Synology, it’s a decent compromise for those who just want to switch on, configure and never touch it again. 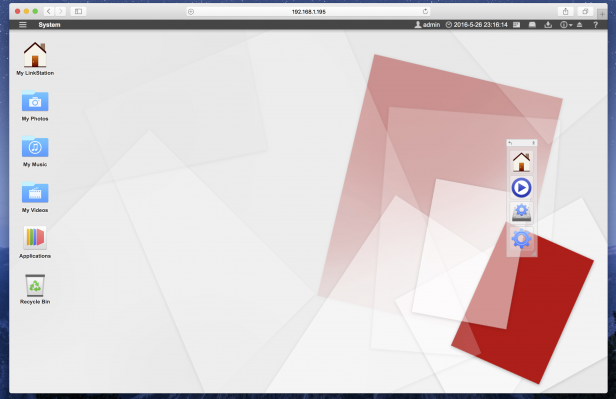 File sharing works particularly well. Windows file-sharing, Samba and AFP are supported, with an iTunes server and DLNA as well. Buffalo recommends that your local user account is the same as your Windows login, which means you can just click the drive in your operating system’s network browser and be ready to go.

Unlike Synology and other NAS vendors, Buffalo doesn’t have an “app store” for extra features – whether first or third-party – to be downloaded and added. There’s no handy support for hosting local WordPress sites, either. The software looks good, but it’s fairly rudimentary – again pointing to a no-hassle approach.

There are a few unique aspects, however. One is Buffalo’s WebAccess, which works like a DDNS (dynamic DNS) service. Give your NAS a unique nickname, and it can be used to log in to the NAS from anywhere. Then, via a tunnel, the software brings up your local login page, assuming the correct port is open in your router.

A popular modern use for a NAS is as a machine for downloading torrent files, without the need for a PC to be left on constantly. Such a feature is present here, albeit in a rather simple manner.

Bizarrely, you need to log in separately to view the torrents page (with a fixed username of Admin and a black password). While that aspect lacks polish, with a few downloads going, it seemed to work alright. File sizes, time remaining and transfer speeds are listed, alongside pause and resume options and simple ways to delete the torrent and data from the NAS.

Upon first starting up the Buffalo LinkStation 520, you’re greeted with the usual setup procedure that asks you to create both an administrator password and local user account. You can choose the disk configuration, too: either RAID0 or 1, or “Linear”, which is another term for JBOD (just a bunch of disks)

RAID0 uses the full capacity of both disks, with reads and writes being split between them. This doubles effective disk performance, but with the risk that if one drive develops a fault, all the data will be lost.

RAID1 provides fault tolerance, but you get the capacity of only a single disk; the other disk acts as a mirror of its file system. For reads, you still get the speed boost of reading a single file from two disks. However, writes only go as fast as one disk can handle.

Linear mode provides the full capacity of both disks, but without any of the speed or redundancy advantages of RAID.

With the 2TB Buffalo LinkStation 520D unit on test, the Linear and RAID0 configurations offered 1.82TB of capacity, with 0.91TB offered by RAID1. 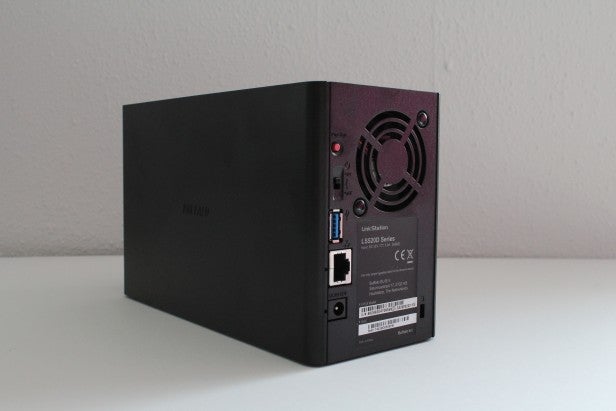 What about copying performance? I tested the Buffalo LinkStation 520D using the tried-and-tested Robocopy command, with a pair of folders filled with 5GB of files – one with movies and the other filled with JPEGs.

I first tested transfer rates with the Buffalo LinkStation 520D set up in RAID0 mode, and achieved some great read speeds with large files, at 112MB/sec; this is about as fast as you can get from a single Gigabit Ethernet connection.

When writing the files back to the NAS, however, the speed dropped significantly to 68MB/sec. While that’s a huge difference, it’s typical of NAS units – although this write performance is considerably lower than Synology’s DS216Play, which underwent the same tests.

As expected, with small files those speeds drop considerably, with 53.1MB/sec read speeds and merely 30.6MB/sec write speeds. This performance was disappointingly worse than some alternative NAS units.

With the unit reset and the drives reconfigured as RAID1, I saw slower performance still. The large folder was only slightly slower to transfer, but transfer speeds with the small folder dropped to just 23.3MB/sec write and 29.9MB/sec read.

Should I buy the Buffalo Linkstation 520D?

The slow write performance is most frustrating and highly disappointing, because in all other respects there’s plenty to like about the Buffalo LinkStation 520.

It’s particularly geared towards less technical users, who may not be seeking the fastest possible transfer rates. No screwdriver is required to fit disks, and the software is certainly inviting, although it lacks some of the advanced features you get with other NAS units.

Given how the very concept of network storage is becoming more popular with mainstream users, there’s a market for a NAS that makes it as simple as possible to get up and running.

If you’re not particularly bothered about the middling performance or lack of advanced features, and simply want file backup within minutes of opening the product, then the Buffalo LinkStation 520 could be for you.