Does the world really need another media player? With the market flooded with models of all shapes, sizes and prices it would seem not, but no technology sector is ever content to rest on its laurels. More to the point, Syabas, creator of the hugely successful Popcorn Hour range of media players, is convinced there are a few more tricks left in the old dog yet.

The Popcorn Hour A-300 is among the company’s latest range of flagship players (we shall be reviewing the cream of the crop, the C-300, shortly) and as such it comes full to bursting with features. Out of the box perhaps the biggest surprise is the A-300’s size. In an era of sweet-tin proportioned players, the A-300 is a more hefty 265 x 135 x 45mm and weighs in at 1kg. Part of the heft is the switch from the plastic casing of its predecessors to a more substantial aluminium enclosure. The rest is down to the A-300’s ability to house a 2.5in or 3.5in internal hard drive (more of later).

Being as long as a netbook means the A-300 can pack a raft of connectivity. To the casual observer the rear of the player may look like something from the space shuttle or a sound studio’s mix desk, with component video, composite video, audio out, SPDIF (coaxial and optical), S-video, USB 3.0, USB 2.0, HDMI and Gigabit Ethernet it may not be embarrassed by such company.

In contrast, the front of the player is far simpler with just a single USB 2.0 port and indicators for disk access, power and response to the remote control. One notable omission is integrated Wi-Fi and while a separate connector (the ‘WN-160‘) is available for £25, to charge extra we feel is a bit mean spirited – and wireless performance for Full HD content can be patchy.

More to the point, build materials aside, none of this is any different from its predecessor the A-200. Thankfully where the real differences start is the most important place in any media player: the software. With the 300 series Syabas has completely overhauled the Popcorn Hour user interface making navigation simpler yet adding more functionality. Now upon switching on the A-300 you are presented with just five icons: ‘Apps Market’, ‘Settings’, ‘Setup Wizard’, ‘Network Browser’, and ‘USB Attached Drives’.

The Popcorn Hour A-300’s Setup Wizard makes getting up and running a breeze. It guides you through language selection, internet connectivity, time zone and location and, once these are completed, it also automatically detects network drives (whether on a PC or NAS) and any physically connected media.

From here the first stop is the Apps Market, which at present contains just 62 apps, but these include media content from the likes of YouTube, TED and BBC iPlayer, social media apps such as Facebook and Twitter, access to Flickr and Picassa Web albums, some basic games, and podcast and RSS readers. In addition there are tools such as ‘CD ripper’, ‘Online TV Recorder’ and a broadband speed test. High profile omissions include Netflix and LoveFilm, but it is a decent list and each downloads and installs in under a minute. 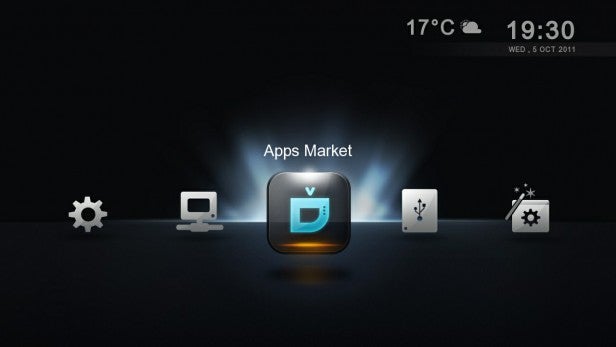 While the apps are nice to have, the primary role of the A-300 is playing back downloaded media and here the player excels. Format support on most modern media players is excessive (the Apple TV excluded) and the Popcorn Hour A-300 is no different. MPEG1/2/4, AVI, MKV, MOV, MP4, RMP4, XVID, JPG, BMP, PNG, GIF, AAC, MP3, WAV, Flac and Ogg are amongst the compatible mainstays, but notably there is also support for 3D MKV and a raft of movie friendly audio including DTS, DTS-HD HR, DTS-HD MA, Dolby Digital, Dolby Digital Plus and Dolby True HD.

Playback is superb, the Sigma Designs SMP8647 800Mhz CPU at the A-300’s heart able to cope easily with all formats, even full bitrate Blu-ray rips. And the player is fan-less so there is no noise to interrupt your viewing/listening pleasure. This is enhanced by the A-300’s automatic collection of metadata with all content (regardless of legality) given cover art, genre, cast and crew information and synopses. All this data is hyperlinked and can be used to search for similar titles in your collection such as titles sharing the same cast members or director. Happily the A-300 also detects foreign titles offering to download subtitles in any specified language (in association with opensubtitles.org) and separates films from TV. 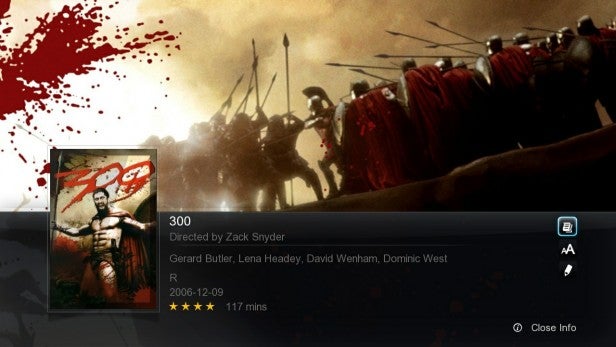 Furthermore the Popcorn Hour A-300’s remote control is responsive, features more buttons than the one for your TV and even has a backlight to make its use easy in low light. All of which means the A-300 is just about perfect, right? Not quite…

In terms of raw specs and playback performance the Popcorn Hour A-300 is near-faultless, but where its flaws lie is in the detail. For a start the media player’s ability to fit an internal hard drive for many will be a significant bonus, but it papers over a more substantial crack: the device is a ‘homer’. This phrase is often used to describe sports teams that can’t perform away from home and the A-300 is a technological extension of this as it is far happier with locally stored content. This content is indexed, tagged and (as the screenshots show) looks fantastic but networked content is little more than a list of files and metadata for them must be re-downloaded each time. 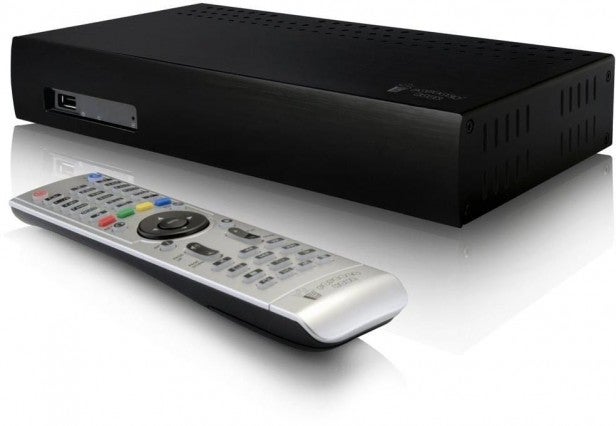 In addition to this, while the A-300’s revised software is a significant improvement over previous iterations it remains far less intuitive than it should be. Some flaws lie with the remote control where there is no single ‘back’ button that can be used in every context (requiring one of ‘return’, ‘stop’ or ‘home’) and frequently used commands like ‘menu’ are small buttons given no positional or size priority making them hard to find without looking.

Some of these issues are corrected with the Android and iOS Popcorn Hour remote control apps manufacturer Syabas has created, but again the company has been penny pinching charging customers £1.99 to download it. This would be borderline acceptable if it worked perfectly, but we found it crashed a number of times and many commands simply didn’t work. This isn’t surprising as it was last updated in February 2011, before the A-300 series even came out.

Price also comes to haunt the A300 in the big picture. At £180 is it one of the more expensive media players, but this is exacerbated by the need to spend another £50 on a capacious HDD to allow it to work at its best, potentially £25 on the Wi-Fi adaptor and even £2 on the remote app.

”’Verdict”’
Syabas has certainly covered all the basics with the Popcorn Hour A-300. It has extensive connectivity, vast codec support, good build quality, the remote control is well featured and playback is excellent. The problems instead lie with the finer (though no less important) details: the remote control’s layout is unintuitive, networked content is only displayed in basic lists and add-ons raise the already premium pricing a little too high for our liking. The A-300 is so nearly a fabulous media player, but it just misses the mark.