The quest to find the perfect solution for playing your multimedia files on your TV has been a long and hard one and has seen its heroes take all manner of different paths; some include storage, some stream over a network, others include PVR capabilities, while some just play files from USB devices. There’s no answer to which is the best solution as that will depend upon how you prefer to store and organise your files but what we can say is which devices are the best at doing certain combinations of those tasks.


Today, then, we’re looking at the Popcorn Hour A110, a device that combines three out of four of the above capabilities. Namely you can pop a hard drive in it to store all your multimedia locally, you can also stream media from network locations and it has a couple of USB sockets for reading media from USB storage devices. All in all that’s quite a bit of functionality but what really sets the A110 apart from the competition is its format support. This device supports just about every audio, video, and image format under the sun. In other words, it has some serious potential. Let’s see if it lives up to it. 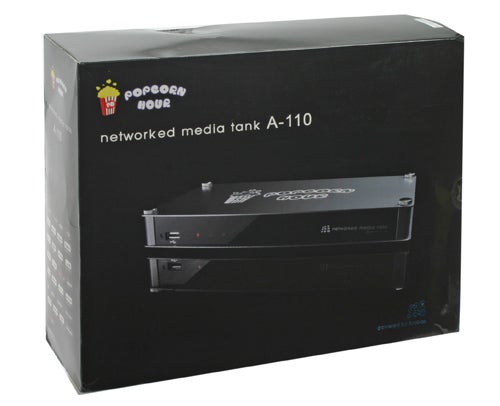 Well, if design is a key consideration for your AV equipment you’ll be sorely disappointed by the Popcorn Hour A110. Its utilitarian metal case is more reminiscent of a cheap external hard drive than something that would look at home under a TV. That said, if you have a smoked TV cabinet or can in some other way keep the A110 reasonably hidden then the front panel looks suitably sleek and minimalist with just a single USB slot, tiny reset button, the product name, and a few status LEDs breaking the otherwise plain glossy black surface.

It’s here that the A110 shows its first differences to the original, but still available, A100. The latter having two USB ports on the front, no reset button, and an extra status LED in the form of a network activity indicator. The status LEDs have also been improved with less light bleed, from one logo to the next, and clearer logos. From left to right, the indicators are for standby, power, and USB activity.


At the back along with a sturdy on/off switch and power socket there is an impressive array of clearly labelled connections. Again, from left to right there are Component, S-Video, and Composite (CVBS) video outputs, then stereo analogue and optical digital audio outputs, HDMI, a B-type USB connector, an A-type USB, and an Ethernet port.

The optical digital audio is another change from the A100, which used a coaxial connector. We’re none too fussed as to which is used as they both have their plusses and minuses – optical is a bit more common but coaxial is less fragile. The HDMI has also been upgraded to the 1.3 standard so brings support for Dolby TrueHD and DTS-HD Master Audio output, as well as Deep Color and automatic audio syncing. Incidentally, the A110 also now decodes DTS audio, something that the A100 couldn’t do. None of these changes from the A100 to A110 are things we count as hugely important upgrades but if you’re after the best quality signal to be passed to your AV setup then you know which to choose.

The B-type USB port labelled ‘USB-PC’ is for connecting the A110 up to a PC (funnily enough), specifically for accessing the internal hard drive – if you’ve chosen to fit one. It enables you to quickly and easily copy your media to the drive just like it were a conventional external hard drive. The only headache is the installation of a special driver to make the drive appear in Windows and OS10 operating systems (EXT2FSD is one that’s suggested for Windows).


Meanwhile, the Ethernet connection, which is only 10/100Mbps, provides connectivity for the A110’s host of network capabilities. These include the ability to access the internal hard drive over a network as you would a NAS box, you can also run a bittorrent client, FTP server, and there are all manner of internet services including youtube, Flickr, picasaweb, RSS feeds, Shoutcast, SayaTV, and many more besides. There’s no built in wireless but many wireless USB adapters will work and you could also use a wireless to wired bridge. 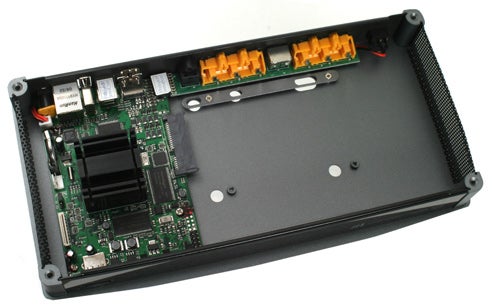 Getting a hard drive inside the A110 is as simple as removing the four thumbscrews holding the top down, plugging the drive in, and screwing it in place using the provided screws. There are mounting points for both 2.5in and 3.5in drives providing plenty of flexibility. The drive connection is SATA, which is another change from the A100 that used PATA, so should fit the vast majority of modern drives.


As you can see, there’s not much to the A110 once you get inside. The vast majority of its trickery is performed by the chip that sits under the large black heatsink. This heatsink makes contact with a thermal transfer pad on the underside of the lid to pass the not inconsiderable heat generated by the processing chip onto the A110’s casing. For this reason the whole unit can get quite warm even when sitting idling and we’ve read reports of overheating. Some people have retro fitted small fans to help air circulation and one could also add a more effective thermal compound to the underside of the lid to aid cooling. We, however, experienced no heat related stability issues whatsoever. 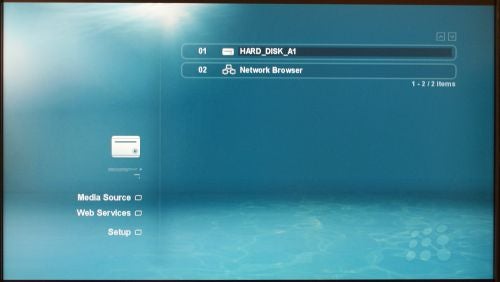 Once connected up, initial bootup can take quite a while but, from there on in, flipping between standby and ”On” is very quick. The first screen you’ll see lists the source device options that are currently available so if you have a hard drive installed, a USB device plugged in, and a network connection present, you’ll have a choice of these three. Choosing network requires you to further choose which network device to connect to, whether it be a NAS box or shared folder on your PC. 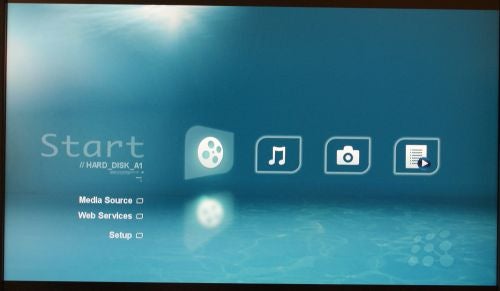 From here on in you’ll be greeted by a home screen that gives four file-type options; video, music, photos, and file. The first three are self explanatory but the last one is less so. Essentially, it’s for accessing anything else like executable files (some of which you may be installing on the system) or documents.

While this system seems perfectly sensible, it is somewhat flawed. Essentially, when you enter one of the four options it filters the files you see dependent on your selection – just as you would expect. However, it doesn’t scan the folders for your selected media then display the files in some sort of library interface complete with thumbnails, or album artwork. Nor, indeed does it show them as a simple list. Moreover, it doesn’t even eliminate folders that don’t contain any of the media you’re looking for, instead just giving you the same selection of folders to work your way through no matter which media-type you choose. 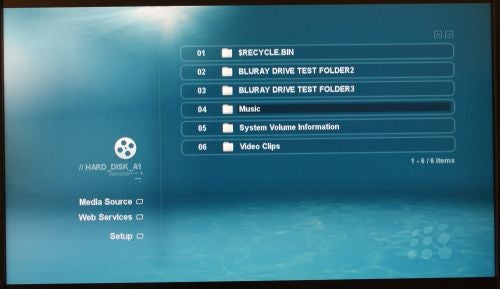 Aside from this issue, the menus are intuitively laid out and, although rather basic they get you where you need to go pretty quickly and with the minimum of fuss. Setting up some of the advanced features like the FTP client and bittorent client requires a reasonable level of knowledge but that’s nearly always the case with such things and the process is no more difficult on here than any other system.


So the A110 has its fair share of quirks but once you begin to actually play some files, nearly all of these are forgotten because, quite simply, it plays everything. There’s no file conversion or resizing necessary, just throw any media file at this thing and it will play it. We’ve included the full list at the end of this review simply because it’s too big to fit sensibly in the middle of this text but essentially it’s very, very long and consists of every major and minor file format and codec available, including mkv, Xvid, mov, wmv, avi, flac, ogg, aac, mp3, png, jpg, and gif. The ONLY exception we found is rmvb files which are commonly used to store anime video. 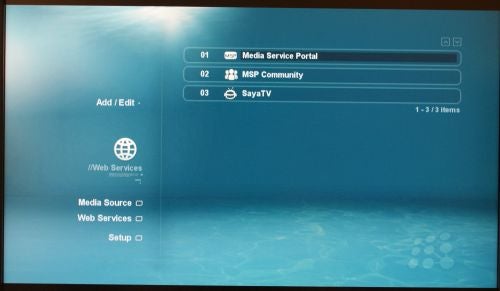 Not only does the A110 support all these formats but it can also play them all flawlessly at up to 1080p resolutions. Playback quality is also decent and certainly is as good as any similar device, though there is an obvious lack of any particularly sophisticated enhancement processing going on so it won’t rival a dedicated Blu-ray player for instance.


We must admit to being dismissive of the web services aspect of the Popcorn Hour A110 at first, as our experience of such things in the past has been underwhelming. However, the YouTube service in particular is a welcome addition, making the A110 a true one-stop media source. 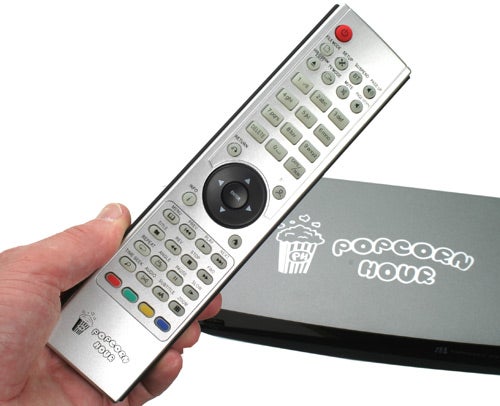 Comparing the Popcorn Hour A110 to other devices on the market, there really isn’t much else that offers the same level of functionality, compatibility, and ease of use that can be had for the same price. The only contender is the A100, which OCZ lists as being about $35 less than the A110. So if you’re not bothered about DTS decoding, HDMI 1.3, and the PATA hard drive, we’d suggest saving the money and getting one of those (if you can find one in the UK).


The Popcorn Hour A110 may not be the most attractive media player on the market and there are cheaper alternatives that support as many file formats and codecs but lack the internal storage and network connectivity. However, if you want the ultimate all-in-one multimedia player, and you’re not fussed about PVR capabilities, then there is no better solution on the market.