We’re not especially fond of getting all too political here at TrustedReviews towers – after all, rarely does the subject of Nick Clegg’s apparent disappearance from the public eye or why we think Theresa May should always be accompanied by Darth Vadar’s theme from Star Wars come up in a review of the latest Henry vacuum cleaner – but we can’t help think that those in power at Westminster should give Super Death Fortress a play.

Whenever the powers that be determine that UK forces should be sent into action somewhere or other around the globe, the fear of “mission creep” – of not knowing when the job is done, and when it’s possible to pull back out again – begins to set in. Inevitably, when you start shooting at one group of people, other groups start to join in, and you end up with a never-ending flow of people willing to take to the field to take you out.

Super Death Fortress is the perfect replication of that problem. It’s a game where manning a lone outpost as leagues of enemies parachute in to shoot you down feels as much like your typical endless adventure on mobile as it does a commentary on UK military policy over the last two decades. 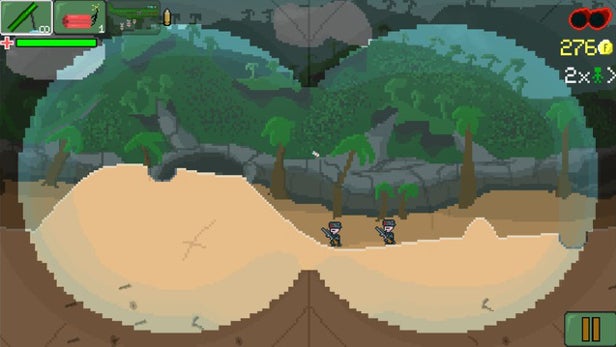 The one big difference, however, is that, while Super Death Fortress’ randomly generated enemies are “endless” in theory, your death will come about sooner or later. The game opens with one stage available and one weapon – a grenade launcher that, in almost Angry Birds style, you have to aim and launch at enemy after enemy. Doing so is a question of drawing your finger out in a line away from your clay bunker and then letting go. The further you draw that line out, the harder the shot will be, with the angle of your fire also crucial to whether you manage to take out an enemy or two.

Those enemies drop in from the sky and land on the uneven ground, slowly making their way towards you in waves and firing when they get in range. The idea, therefore, is to hold them off for as long as you can, blowing up as many soldiers as you can with each shot in order to earn more coins. These coins can then be cashed in when you have enough under your belt to upgrade your mini-fortress, as well as unlock new stages. Somewhat uniquely, progression in this free-to-play release is entirely on your own terms. If you only ever want to play the first, rather barren stage, that’s entirely up to you. 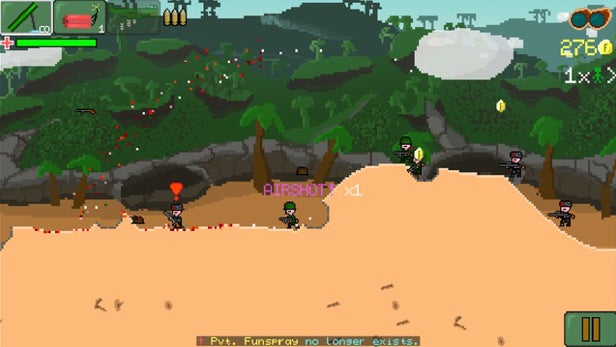 The longer you play, however, the more likely you are to want to move onto new levels. After your first few tries, success in Super Death Fortress actually becomes rather straightforward. Once you’ve got the aiming system down, most of your shots will hit a target or two without you even thinking about it, and there’s a genuine buzz as with any tower defence game to taking out masses of rivals in one go.

What’s slightly disappointing, therefore, is Super Death Fortresses solution to ending a game that, for the skilled amongst its audience, could well go on for hours. With only two types of soldier on offer, the game resorts to sheer numbers in order to shut you down eventually. Men are dropped within mere yards of your turret at very short notice, diverting your attention away from the masses already firing on your position on the hillside to those immediately in front of you. Even with the air strike bonus and mortars in your arsenal, you cannot hold everyone off at the same time: your death is inevitable. 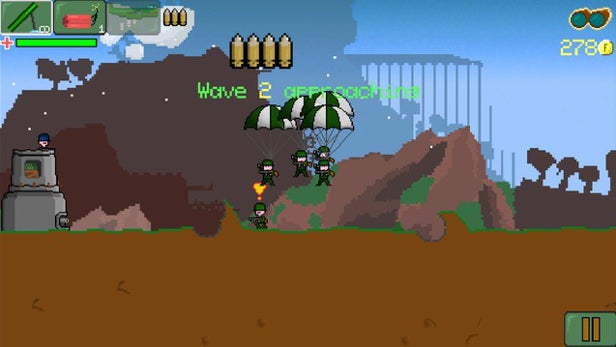 Which is how it should be. The structure of Super Death Fortress means the more you play, the more you upgrade and the longer you last during your next playthrough. Each game also gets more hectic, with the upgraded turret meaning you’re able to take on a greater number of enemies at any one time, but there still feels like there’s something missing – an extra element that would add a layer of depth to what is otherwise a perfectly perfunctory release.

And that’s why Super Death Fortress feels like a little bit of a missed opportunity. The aiming system is to be applauded – it’s simple, it works, and it’s probably the biggest pitfall the game could have fallen into – but more creativity when it comes to how the enemy is deployed and reacts would give Flat Earth Games’ latest the kind of arsenal it needs to fight on just that little bit longer.

Verdict
The aiming system may be spot on, but Super Death Fortress’ take on total war is a little too one dimensional to be a long term prospect, with its method for forcing you out of play – upping the number of enemies landing in your territory – proving a little too repetitive to truly stand out as an all conquering tower defence title.