If there’s a genre that can rightly be accused of taking itself a little too seriously at time, it’s science-fiction.

I’m not entirely sure what I learned from my 169 minutes sat in the flicks watching Interstellar, but based on the reactions of the cinema-goers around me, it quickly became clear that laughing loudly after Matthew McConaughey delivered every line wasn’t what Christopher Nolan was aiming for. Apparently banging my head loudly against the theatre wall when the film insisted on rolling on for hour after hour wasn’t ideal, either.

In reality, Interstellar – like many of its sci-fi brethren – is a rather serious affair. I can’t quite remember what its main message was, but I seem to remember it was something to do with it being okay to throw books around in the library. Or you should always synchronise watches with someone when they’re going away on a long journey. Something like that, anyway. 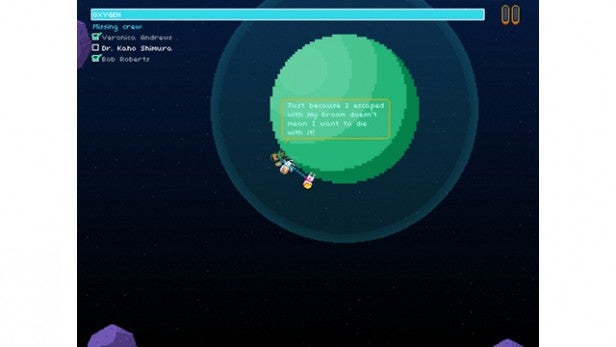 If Interstellar and its ilk are a little too heavy for your liking, then Sunburn will feel like a welcome tonic. This is still very much sci-fi, but perhaps not as many fans will know it. Rather than striving to survive in the depths of space, Sunburn is all about putting people out of their misery. It’s about dying, but not dying alone. And, perhaps most impressively, it manages to take what is an overtly melancholic setting and spin it into something unashamedly amusing.

Taking charge of a captain set adrift in space after his ship is smashed up by an asteroid, your job is to dart around in the darkness, picking up the rest of your crew as they float around each stage. You’re not picking them up to save them, however. Instead, once they’re strapped onto the back of your space suit, your goal is to head directly to the nearest sun, speeding each crew member towards their death at 27 million degrees. 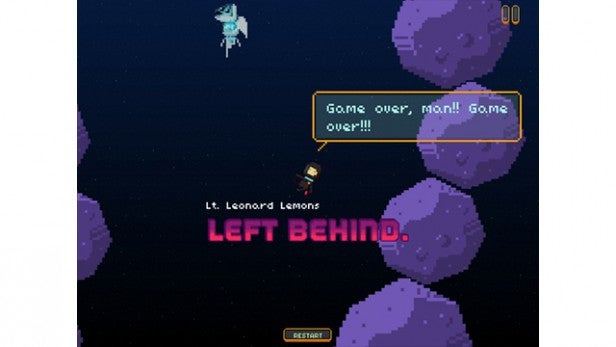 Play, therefore, revolves around planet hopping. Each level has a set number of crew members dotted around it, as well as planets that serve as temporary base camps. The idea is to spin the captain so he’s facing the desired direction (either by walking around the surface of the small planets, or literally rotating him as he floats in space) before charging up your jump and shooting off in the vicinity of your colleagues.

Doing so is fairly straightforward – holding down left or right causes the captain to head in that particular direction whether on land or in space, while holding them both down charges his jump up – but with your oxygen supply running down as soon as you leave a planet’s surface, sheer panic is also a major factor in Sunburn. It’s very easy to shoot off into space and then find yourself drifting in the void simply because you darted off in the wrong direction and run out of air before you could right yourself. 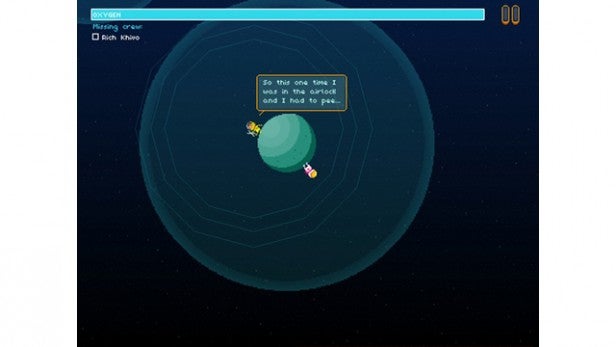 When it comes to the design of Sunburn’s 50 plus stages, however, things are far less random. As well as planets that begin to behave differently on contact – early additions including worlds made of glass that smash up after repeated landings, and floating planets that begin to move upon impact – there are also comets to bounce off and the pull of the sun itself to contend with. There are no halfway measures in Sunburn: to get through a stage, you have to pick up each and every crew member on offer and plunge them directly into the sun.

As the levels get more complex, finding the ideal route from one crew member to the next becomes less and less obvious and, like all of the best puzzlers, success quickly becomes a case of careful planning. Like tackling a rudimentary pinball machine, knowing what elements to bounce off, which planets to land on and in which order to pick up your crew are the fundamental principles behind play in Sunburn. What makes the whole thing extra special, however, is the way it’s all delivered. While the concept of killing your crew members is, as pitched, a little grim, the whole game is essentially built around a play on words. 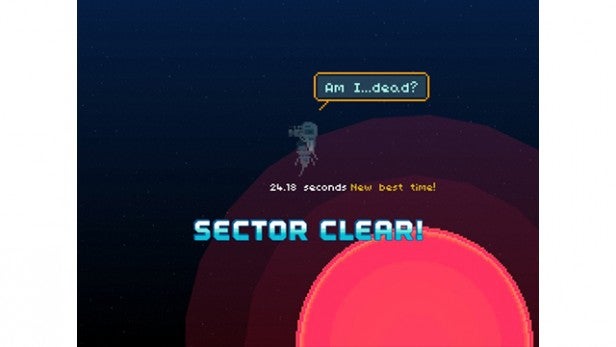 During Sunburn’s opening cut-scene, the helpless crew members talk about “not wanting to die alone”. The joke, therefore, is that they won’t – they’ll die together, instead. It’s an amusing twist that holds from beginning to end and, with play littered with references to sci-fi films past and lines of dialogue packed full with irreverent humour, Sunburn is the definition of a game that doesn’t take itself too seriously.

This is no small achievement, either. Developer Secret Crush has let the player find the fun in what should be a desperate situation and, as a result, used a game about death to breath new life into the sci-fi genre as a whole.

Verdict
It’s not often you’ll come across a game where the aim of the play is to die, but Sunburn’s entertaining take on mass euthanasia is as unique as it is engaging, with its planet-hopping based play serving as a tonic to those warn down by a science-fiction genre all too eager to take itself a little too seriously.