We need to talk about cockpits. Planes have them, spaceships have them. Basically, you need to be in a cockpit to pilot things. The key to making you feel like you’re flying something? Get the cockpit right.

Trouble is, cockpit mode in video games is generally rubbish, and it’s been that way in every flying game I’ve played going back to Star Fox on the SNES. Control panels and other blind spots take up half the screen, leaving hardly any window to look through. How are you supposed to shoot anything?

That all changes with VR. It gives you the ability to look around, but more importantly, it lets you look out. The folks at Criterion Games and EA understand that. Not only have they taken advantage of that to create a stunning Star Wars experience – they’ve also created one of the best VR showcases available. 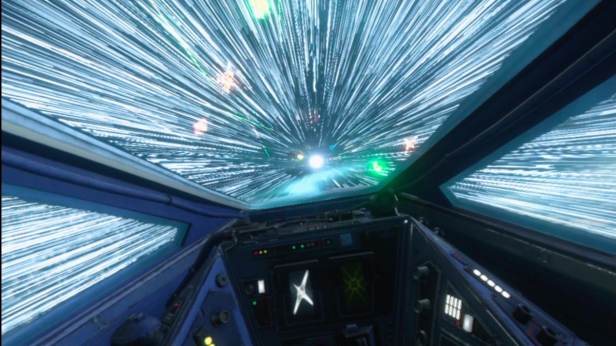 Narratively, X-Wing VR (officially, the Star Wars Battlefront Rogue One: X-Wing VR Mission) on PlayStation is a simple offering. It’s a single mission, lasting around 15 minutes. You take the role of a rookie pilot on their first galactic flight, which happens to involve navigating an asteroid field and assisting in a spot of dogfighting.

The mission makes a brief reference to the upcoming Rogue One film, but there’s not enough to spoil anything. Basically it’s just an excuse to fly around space and shoot things for a bit – which suits me just fine.

As with most other VR experiences, it plays out entirely in first-person perspective. All the buttons on the dashboard are yours to play with. Most of them don’t do much, but you do get to open or close the S-foils (wings) and change firing modes. My personal favourite, which doesn’t actually serve a particular function, is the button that brings up the targeting computer – a nice nod to Episode IV’s iconic trench run. 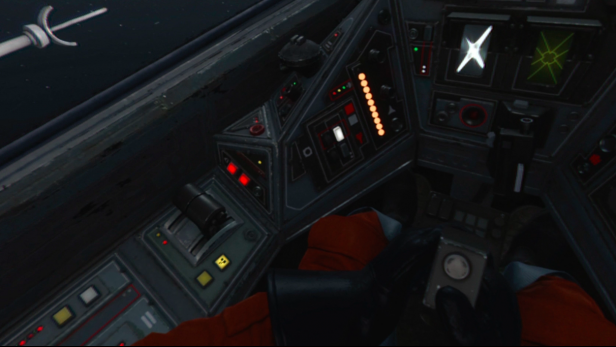 I should point out that you don’t physically move your hands to click on things. Your head controls a small on-screen pointer, and you simply tap the buttons on the standard PS4 controller. There are no Move controllers here.

Why? Although the Move controllers afford you a bit of freedom, they also tend to come with a pair of disembodied hands in the game, which breaks immersion. I loved Batman: Arkham VR but the floating Bat Hands were a slight turn-off. In X-Wing VR, your hands are clamped around the flight stick at all times. You get shoulders and arms, too, and if you look down you can see you’re dressed as a pilot of the Rebel Alliance. 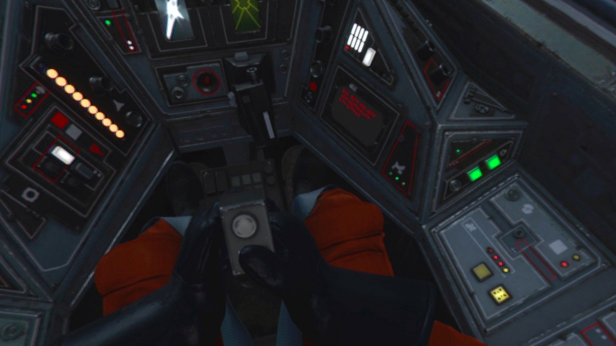 Another reason Move controllers have been ruled out is that they would make flying the X-Wing very difficult, and Criterion was keen to avoid a learning curve. The flight controls are the same as those used for the regular Fighter Squadron mode of Star Wars Battlefront, so those familiar with that will be right at home. This means you get basic steering controls – without manual yaw, pitch and roll – plus the ability to speed up, slow down, activate shields and fire torpedoes.

The idea of basic steering and pushing buttons didn’t sound particularly exciting to me, but that all changed once I launched into space. I wasn’t messing with my dashboard as I was busy trying to gauge the distance between two approaching asteroids and turning around to see what was shooting at me. I shot an approaching TIE fighter and it exploded right above my left window, making me instinctively duck. 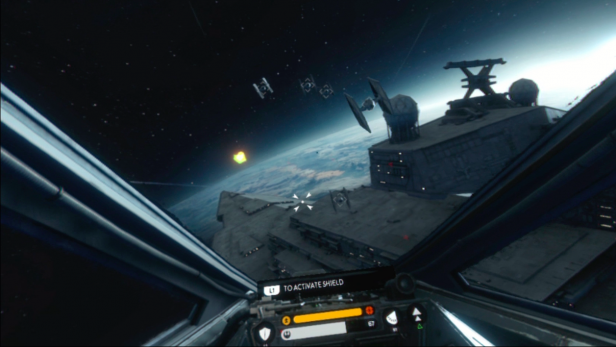 Admittedly, cockpit-based battles aren’t new in VR. There’s plenty of that in Battlezone and EVE: Valkyrie, and VR has already made a success of cockpit mode in driving games such as Gran Turismo Sport (not so much in DriveClub).

But none of those created the illusion that I was controlling a vehicle as much as X-Wing VR did. The cockpit is detailed on an unprecedented level: the buttons beep and the S-foils clunk as they go into attack position, the dynamic lighting changes depending on which of your four lasers is firing, and you can turn right around to look at your droid. 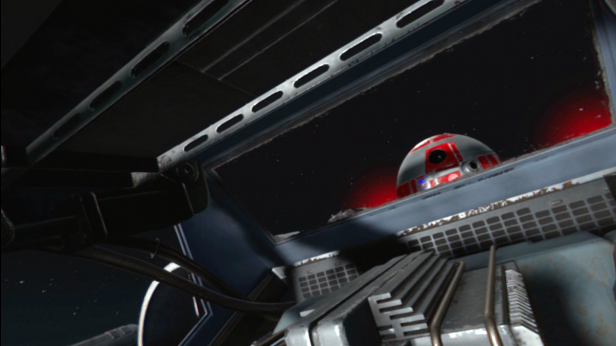 It all made me feel like I was piloting a machine, rather than sticking a laser pointer out of the window. It’s not about lining up sights and going ‘pew pew pew’, like the look-to-aim rubbish you get with EVE. It’s about getting as close as possible to steering a hunk of metal through space and choosing the right settings to obliterate the opponent – not easy but satisfying when it works. Flying and dogfighting in X-Wing VR left me feeling somewhere between precarious and powerful, and that’s a good place to be when pretending to sit in a weaponised cage, separated from the cold void of space by bits of glass and 70s circuitry.

It’s over too soon, but those 15 minutes are an empowering fantasy fulfilment. It’s the most exhilarating thing I’ve experienced in VR, as well as a childhood dream come true. Best of all, it’s free. Well, it’s free as long as you’re the owner of a PS4 and a copy of Star Wars Battlefront. X-Wing VR (or Rogue One: X-Wing VR Mission) comes free with the latest update, and is available today. If you don’t own Star Wars Battlefront, I’d go out and buy a copy: it’s cheap enough these days and the VR mission alone is worth the price of admission.

Criterion and EA: please make a full game out of this and I will give you all the money.

What’s your favourite VR game? Let us know in the comments below.