Available on PS4 and PC (with PSVR, Oculus Rift and HTC Vive support)

Star Trek Bridge Crew is the game that every sci-fi fan, myself included, has been waiting for since we first saw Captain Kirk boldly go where no man has gone before – and no, I don’t mean romancing blue aliens, as in Mass Effect Andromeda.

The game puts you and up to three buddies in control of Star Fleet’s newly made USS Aegis vessel and tasks you to complete a variety of missions, ranging from search-and-rescue operations to firefights with pesky Klingon Warbirds.

Gameplay is split into the classic bridge crew sections: Captain, Helmsman, Tactical and Engineering. Each section is responsible for a different part of the ship’s systems. Jumping between the roles during the game’s opening tutorial  seems simple enough.

The captain’s is a coordinating role, giving you a God’s-eye view of all the ship’s systems. It’s only in this role that you can see everything, from how much power Engineering is putting into weapons and shields, for example, to objects in the ship’s vicinity and the team’s current mission objectives. 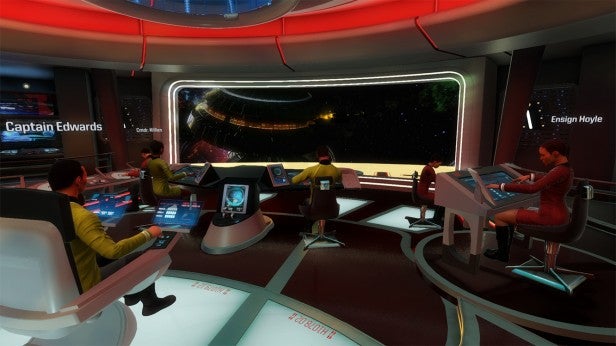 The Helmsman is a pilot role responsible for getting the Aegis to where it needs to be. It controls the ship’s navigation, steering and activates jumps to warp speed. Engineering deals with the ship’s power distribution, deciding how much juice is in the Aegis’ shields, engines and phasers. Finally, the Tactical seat manages the Aegis’ weapons  and scanners.

Whatever station you play, the game looks amazing and has one of the most immersive VR control systems I’ve ever seen. The virtual bridge you play in will leave any Trek fan squealing with ‘Quch’ (joy). Ubisoft has managed to accurately replicate the look, feel, sounds and atmosphere of classic Star Trek. Although it’s technically a new ship, the Aegis’ bridge borrows elements from the Enterprise and Voyager vessels, creating a nostalgic setup that feels like you’re actually sitting in a Federation starship.

The attention to detail and accuracy carries over to each station’s interactive control systems. The game can be played using either a basic gamepad (PS4 or Xbox One) or the Oculus Touch, HTC Vive Wands or PlayStation Move. Played with the motion controls it’s an absolute blast, as it tasks you to control the ship by manually flipping and pressing the virtual ship controls. Want to engage the warp drive? Then you’ll have to push the big red throttle at the Helmsman station.

This sounds insignificant, but it makes the game that much more immersive and reinforces that this is a Star Trek game built by and for Trekkies. Every station looks and handles exactly as it does on the show; steering is via a virtual touchscreen, while power is routed to various sections by pulling power across vertical columns at Engineering, just as it was on Next Generation. 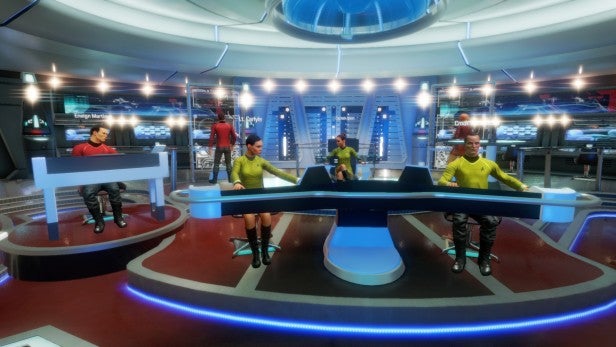 Things only got better on jumping into multiplayer, as Ubisoft has once again designed the differing roles to interact as they did on-screen. As a result, each of the roles heavily overlaps and carrying out even basic tasks – such as warping to another area of the galaxy you’re in – requires cooperation between every member of the crew.

The complexity leads to some pretty entertaining situations when playing with friends, and creates a really nice team dynamic.

During our first mission we were sent to investigate a distress beacon for a marooned Federation vessel. Fresh out of the academy, our fearless leader marked where we needed to go on the ship’s star map, before going on to mirror the iconic pre-warp motions of Picard – lifting his virtual avatar’s hand with his index finger outstretched and uttering the word “engage”.

Acting as the ship’s Helmsman, I tried to follow his commands and flipped the lever to activate our warp, only to hear a minor murmur from the engines and for us to remain stationary. The engineer had forgotten to divert power to the warp drive. After a heated exchange of shaking fists between myself and the glorified sparky, we tried again, warp coils charged, and finally made it to our destination

Once there our ineptitude continued, when a rogue Warbird descended on us as we tried to evacuate the marooned Star Fleet crew. Still green, our captain issued conflicting commands between stations, ordering Tactical to keep beaming people on board while simultaneously demanding that Engineering raise shields to maximum – you can’t beam people on board with shields up.

As our engineer shouted a non-PG-13 version of “I cannae do it, Cap’n, I don’t have the power”, the Warbird’s opening salvo hit, damaged our hull, and created a series of explosions on bridge that sent more than a couple of red shirts to their grave. 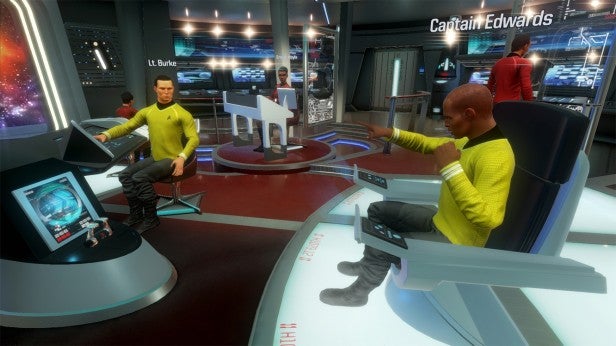 Realising our captain was more Zapp Brannigan than Jean-Luc Picard, I decided to take evasive maneuvers and make a bee-line for a nearby asteroid belt without consulting my captain or fellow officers, setting in motion a series of disasters. With all power to engines, but none for phasers, my tactic not only took us out of range to return fire, it also led us directly into a minefield with no shields – a move I really don’t recommend.

From there we soon joined the red-shirts and returned to matchmaking, laughing at our own ineptitude and promptly mounted a mutiny against our captain, who, as it turns out, had been drinking at the wheel.

It’s these small human interactions and moments of humour that make Star Trek Bridge Crew such an entertaining game when played with the right group of people.

This is a good thing, as in single-player mode the game is limited. It sees you take the role of captain by default, and while it’s fun for the first mission or two, the repetitive nature of the game quickly becomes apparent when playing solo. Most missions are a simple case of going to various markers on the star map and then scanning, shooting or rescuing whatever is there. In multiplayer with friends, the game manages to stay fun despite this, thanks to the constant threat of human error, and the interaction between players.

With an AI crew that does exactly what you tell it to, the gameplay quickly becomes stagnant. 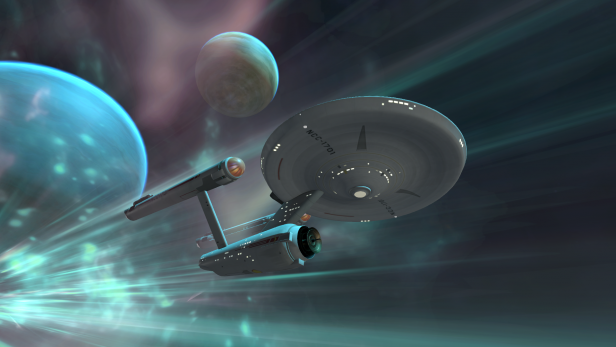 The reliance on well-spirited teammates is also a double-edged sword that can lead to some unpleasant situations in public matchmaking. On more than one occasion when playing with randoms, people began to take things way too seriously, and mishaps that would have led to laughter with friends descended into verbal exchanges that made heated DOTA II voice-chat and YouTube comments look like polite discourse.

Luckily, this is no longer an issue, since Ubisoft has taken the excellent decision to make Star Trek Bridge Crew cross-platform, letting you join forces with any mate on your UPlay account, regardless of whether they’re playing on Oculus Rift, HTC Vive or PSVR.

My only other issue is the lack of variety when it comes to missions and game modes. As it is, there are only core missions and a custom Expert mode, which basically sets you off into space to aimlessly explore. While this sounds fun, it quickly begins to feel as dull and repetitive as early builds of Elite Dangerous. Personally, I’d like to see a PvP mode added that lets my crew take on a human-controlled Warbird. Please make it happen, Ubisoft – I’ll send you Gagh.

Featuring deceptively deep cooperative gameplay, Bridge Crew is the best virtual reality multiplayer game currently on the market – and it will give Trekkies multiple hours of joy.

However, a lack of variety in missions, and the general asshattery of some players in public matchmaking, mean it’s a dish best enjoyed with a team of friends, not randoms.