One of the major claims of sous vide cooking is that cheap cuts of meat can taste like expensive ones. Colour us sceptical but we wanted to find out for ourselves with some average grade rump steak from a major supermarket.

As it was our first test we filled the SousVide Supreme with the required amount of water (around 9 litres) and turned it on. The controls are very simple; a small panel with a digital read-out lets you set the temperature and cooking time.

We put the steak straight into the plastic pouch and sealed it using the supplied vacuum sealer. We then had to wait approximately half an hour for the water to reach the required 55 degrees for our preferred medium/medium-rare and plopped the bag into the water, setting the timer for 2 hours.

The digital controls are fine for setting temperature but a little fiddly for setting the time you want to cook for. Trying to set it for two hours we found ourselves waiting patiently for it to get to 30 minutes only for it then to shoot up to 4 hours in the blink of an eye. It’s a minor pain, but we’d like to see it improved, perhaps with separate minute and hour buttons.

Two hours later some beeps informed us the steak was ready.

It came out rather anaemic in colour, and it was a little strange to have a ready-to-eat steak with none of the smells associated with cooking one using a traditional method. Both issues were quickly remedied with a couple of 30 seconds blasts on either side in a searing hot pan. The outside was lightly caramelised while the inside beautifully pink.

It was flavourful and tender, much more than we’re used to from a rump steak. We cooked a steak from the same packed in a pan using our tried and tested three minutes on one site and two on the other and found it to be almost as flavourful, but far more chewy.

Our first experience with the SousVide was very encouraging so we tried the egg test. Eggs are clever enough to come conveniently pre-packaged in their own vacuum pack, otherwise known as a shell. According to our recipe book an hour in the water bath at 62 degrees Celsius creates beautiful poach-like eggs.

We used large organic eggs and attempted the recipe a few times but always found the white to be too runny for our tastes. The yolk always came out beautifully soft or buttery, and totally unlike the slightly grainy consistency hard-boiling gives it.

We tried more than a dozen eggs but could not find a consistency that matched boiling or poaching an egg. Braver and more adventurous souls may be able to live with such a runny white, but not us.

Following our failure with the eggs we thought we’d land ourselves back on more level footing with some more steak, but a premium 28-day aged sirloin steak this time.

Once again the steak had the perfect colour throughout and was melt-in-your-mouth delicious. The difference between pan cooked and SousVide was slightly less pronounced than with the rump steak but it was certainly still tenderer.

Moving onto poultry now and this was a different challenge as we wanted a low-fat, more healthy meal. We chose free-range skinless chicken breasts. We lightly seasoned them and added oregano and parsley before sealing into the vacuum bag and cooking at 63 degrees for an hour.

By this point we were savvy enough to boil a kettle to get the SousVide Supreme to the required temperature much more quickly.

The chicken came out cooked and white, no pinkness here. It looked a little like it had been boiled, but it was like no chicken we’ve tasted before and it divided opinion.

The herbs had infused beautifully with the chicken with the parsley in particular cutting right through the breast. All agreed the flavour was beautiful, it was the consistency that takes a little getting used to. It was soft, very soft – but not mushy. The slightly rubbery texture of oven cooked chicken was no-where to be found. Some liked it, some didn’t but all thought the taste was exceptional.

Next we took a 180 from lean chicken to try a more ambitious recipe with fatty belly of pork at 83 degrees for 9 hours. The meat came out with the fibrous consistency expected of it, but was exceptionally tender. The fat was gelatinous and a quick blast in the frying pan popped and sizzled it to perfection.

Pork belly takes a while to get right in the oven and the meat can turn out a little chewy so we were very happy with the results from the SousVide Supreme. 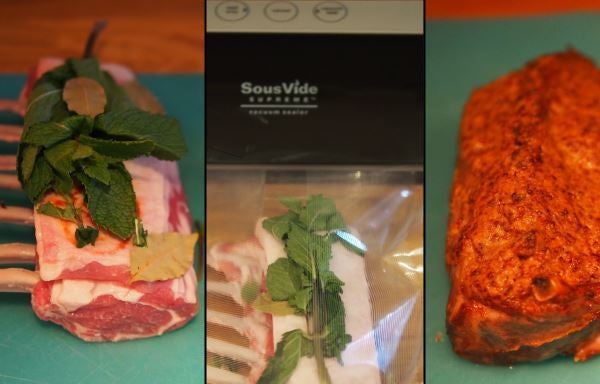 Growing in confidence we began to host dinner parties using the SousVide Supreme. We cooked some asparagus first (vegetables require a higher temperature so need to get going before meat) and left them in while cooking the lamb as they won’t cook any more at a lower temperature.

We covered the lamb in crushed garlic, fresh mint and bay leaves and let it bathe for two hours at 57 degrees. The racks came out perfectly pink and moist so we covered them in a grain mustard, olive oil and balsamic sauce and put them under a very hot grill for 20 minutes, 10 for each side.

The chops carved up beautifully and were deeply infused with the flavour of mint, bay leaves and the mustard sauce. 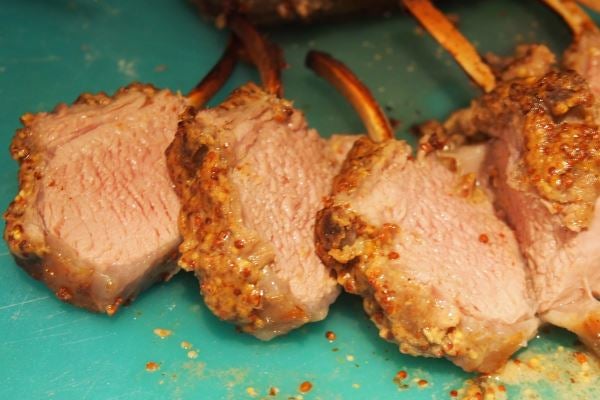 Pork cheeks might sound like a strange choice of cut, but they
have a lot more muscle than belly and require very slow cooking to
become tender, so in theory perfect for the SousVide. 8 hours at 80
degrees with a variety of herbs and spices and we found them swimming in
yummy juices.

A short simmer for the juices to reduce and we were left with succulent and tasty cheeks that melted in the mouth. 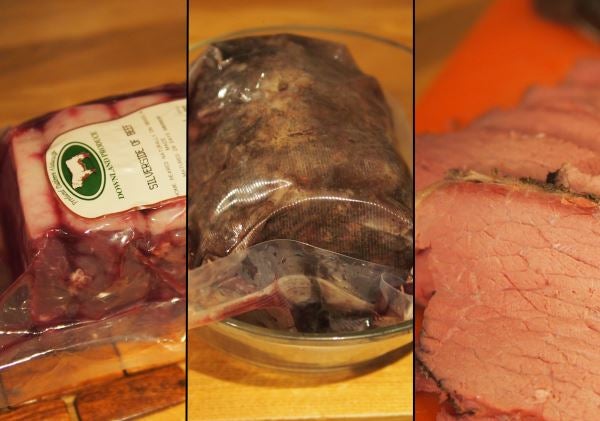 Silverside of beef in packaging, just out of the SousVide and carved

A good roast beef is the key to the heart of every British man, woman and child so seeing if the SousVide Supreme could match a traditional Sunday roast was a key test.

The 2kg side fit into the bag and bath with ease. In fact, we measured the extra space and found that a joint of up to 5kg would fit comfortably. That’s a big slab of meat.

We prepared the beef with plenty of salt, pepper, garlic, oregano and bay leaves and left it to cook at 55 degrees for whopping 34 hours.

We were surprised by the amount of juice in the bag when we removed the meat from it. We promptly used it to create delicious gravy after browning the joint in a very hot pan and leaving it to rest for 10 minutes before carving. Concerns that the roast would be dry because of the amount of liquid left in the bag were unfounded, but we did find it to be less juicy in the centre than we are used to. It was still delicious and incredibly tender, even the pieces we intentionally cut thickly. 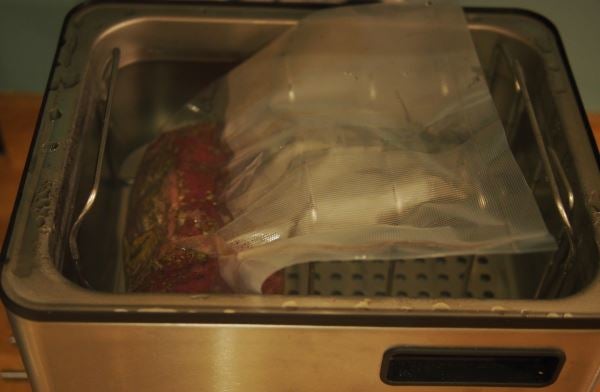 A 2kg piece of beef fits easily into the SousVide Supreme

We have cooked around 30 separate meals in the SousVide and are constantly surprised by how easy it is to use and get great results with. There’s none of the precision timing panic that comes with cooking a roast dinner, all it requires is a little extra planning so you can ensure meals are cooked for the required length of time.

Marinating is done at the same time as cooking so a whole step is removed from the process and you can very easily cook multiple steaks, for example, and freeze them and reheat them in the SousVide Supreme without cooking them any further.

With everything cooked in pouches cooking in the SousVide is reasonably tidy but what about the costs?