What is the SousVide Supreme?


Have you ever wondered how top restaurants manage to serve perfectly cooked cuts of meat quickly and at the same time? Have you ever wished your steaks would be as soft or your rack of lamb as tender? If you have then you’ll be interested in the SousVide Supreme – a domestic version of the water baths normally associated with top restaurants the Great British Menu, or Masterchef.

We’re enthusiastic home cooks, but at £350 the SousVide Supreme is not an impulse buy for the amateur, so let’s find out what’s so special about cooking the sous vide way. 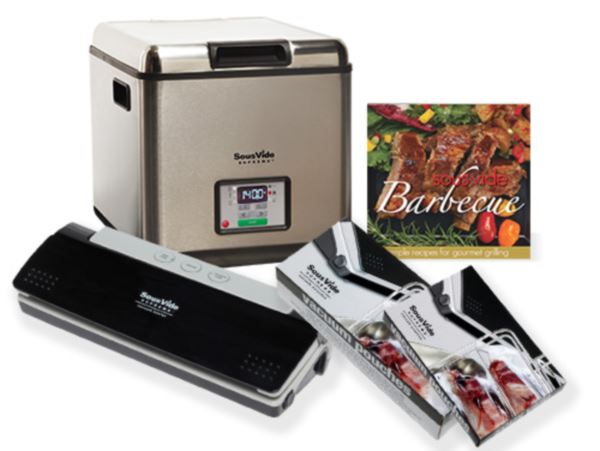 When it comes to kitchen gadgetry, looking good is now as important as getting the job done and in this regard the SousVide Supreme doesn’t disappoint. Clad almost entirely in stainless steel with just a few areas of hardy matt plastic, it looks the business. its footprint is reasonable, about the same size as a small microwave, but unlike a microwave it opens from the top so you may not be able to use it slotted beneath a cabinet (dimensions 29cm/36cm/29cm).

There are two vavuum sealers to choose from. One is slightly cheaper and can’t seal bags with liquid in, the other can. Both are good but the newer version is a step up. We review both individually on the final page of the review but you can jump there now by clicking here: SousVide Vacuum Sealers. 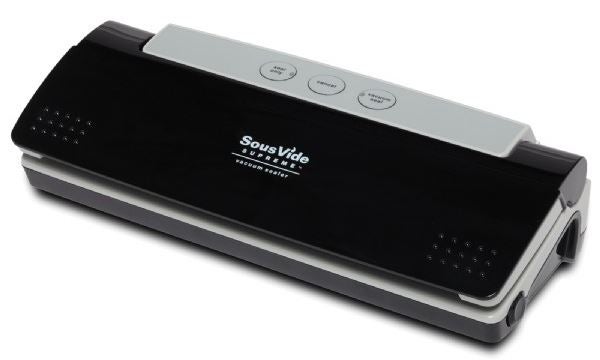 SousVide Supreme – How does it work?

Sous vide means ‘under vacuum’ in French and the gourmet cooking method is one of the simplest and most effective we’ve seen. The idea is that sealed bags of your favourite seasoned and spiced meat or veg cook gently for hours, infusing and preserving flavour, nutrients and taste.

At first the thought of cooking a 2kg silverside cut of beef at 55 degrees Celcius filled us with trepidation. If it takes 175 degrees in an oven how can the SousVide Supreme cook it at just 55 and be safe to eat? Well there’s some clever science behind it, and being the curious and somewhat suspicious folk that we are at TrustedReviews we made sure we found out before sampling.

In conventional ovens the air is heated and the heat radiates, in this example, to a side of beef. It’s an inefficient process, though, and the outside of the roast will need to get very hot for the inside to start cooking. Attempting to cook the roast at a very low 55 degree heat for a very long time would result in nothing more than a warm, dry uncooked slab of meat. Cook it at too high a temperature and you’ll get a burnt surface but a raw middle.

Timing is critical when using an oven and, if done well, you should end up with a crispy brown surface (known as the Maillard Reaction) with a gradually pinker meat the closer to the centre you carve.

The water used in the SousVide Supreme is far more efficient at transferring heat to all areas of the vacuum sealed meat at the same time. In this case 55 degrees will gradually seep through the meat cooking it evenly throughout (barring a degree or two) without causing the proteins to toughen due to high temperatures. You end up with a side of beef that is cooked evenly and has a consistent colouring throughout. The clever thing is that you don’t need to hover over it. You set the SousVide to the desired temperature (medium rare in this case) and you leave the beef in for hours without burning it.

Because it is the same temperature from the surface to the centre you miss out on the delicious browned exteriors. This is easily remedied by browning the meat either before or after the vacuum bath. There’s some argument about which way round is better but we found browning after was more convenient and created the perfect taste and texture. 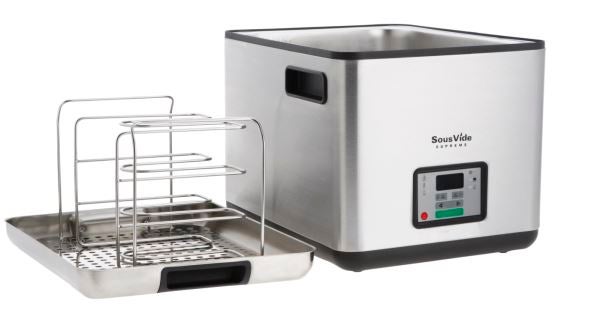 The other reason we cook meat at high temperatures is to kill bacteria. Low temperatures take a lot longer to render meat safe, hence why you’ll hear some very long cooking times when using the sous vide method. It may not sound very convenient, but in practice it’s really easy because you can leave the vacuum bags in the SousVide Supreme for hours without the food overcooking – so you can remove just when needed, rather than having to time everything to perfection.

If you want to find out more about the science of cooking using the sous vide method then there’s a very in-depth blog here.

Right sciency bit (pretty much) over, there’s only one way to tell if the SousVide Supreme is worth it, and that’s by cooking some dinners – we suggest not reading this hungry!

Next
The Cooking Test Review