Headphone amplifiers are
something of a niche market, and with good reason. For one, most headphones
that require additional amplification are meant for use with powerful Hi-Fi systems, not low-power
sources like mp3 players. For another, they’re an extra bit of bulk to carry around, somewhat
defeating the purpose of a portable media player being, well, portable. And yet,
examples like the SoundMAGIC A10 remind us just why we shouldn’t be so quick to
write off headphone amps as unnecessary – in the right circumstances they make
a tangible difference to your listening experience. 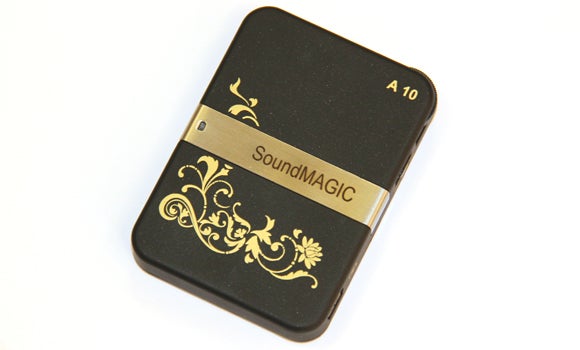 To look at it you would
probably guess that the SoundMAGIC A10 is pitched somewhere between rival
FiiO’s E5 and E7 amplifiers, erring towards the side of the smaller of those
physically, but matching the price of the larger, at £65. At a glance that does
seem quite expensive – in fact it is quite expensive – but we’ve seen enough
pricey audio equipment to know that you almost always get what you pay for, and
the A10 definitely makes an effort to justify its cost.

The physical design is attractively
understated. The 50 x 12 x 70mm frame sits well in the palm of the hand,
has rounded corners and edges, making it very comfortable to hold. The matt
slightly rubberised finish feels as great as it looks, and we were rather taken
by the fancy golden-yellow artwork and the metal band that bisects the front of
the A10, with the SoundMAGIC name emblazoned upon it. 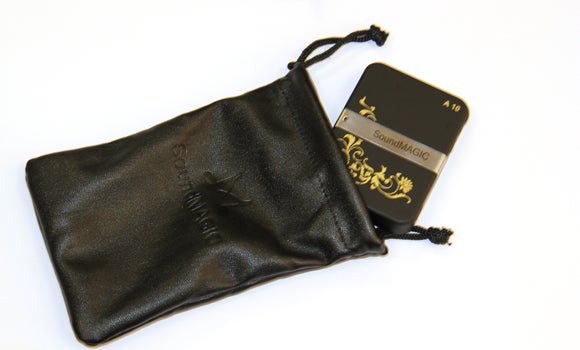 The placement of the 3.5mm
input and output jacks on the top of the A10 is the best possible, as it means
when placed in a pocket cables don’t get in the way. Less to our tastes is the
use of an analogue volume dial on the top right corner. Frequently we found
output of the A10 unintentionally changing as it moved about in our pocket -
that can be solved by placing it in its supplied faux-leather carrying case,
but really we’d rather see buttons. Speaking of which, the A10 lacks one for
toggling its power; rather, the device turns itself on and off automatically
depending on whether the 3.5mm headphone jack is in use.

Also included with the
SoundMAGIC A10 amplifier is a short 3.5mm cable, for connecting the device to
your media player, a Y-splitter cable enabling the A10 to output to two players
at once and an iPod dock connector. This latter inclusion is particularly well-considered,
as iPods provide a line-level output via the dock, letting you bypass the
internal amp and just use the A10 – on other players you’ll be amplifying an
already amplified output. 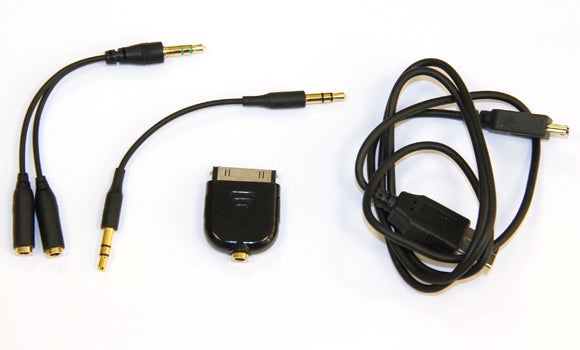 A perfect test for this amp are the Q701s, which an iPod struggles to drive using its standard headphone jack. Connect them up to the A10, in turn to an iPod nano via the dock connector, we observed an immediate
improvement in not only the volume available, but also the quality of the
output.

In a word you could describe the output of the nano and A10 combo as
smoother – the overall feel is slightly less clinical than the iPod alone. A set of Shure SE425 and Grado GR10 in-ear ‘phones – more likely candidates for a portable
headphone amp – appreciated the extra power provided by the A10, too, with
their already detailed and expansive sound filling out a little, and faint background details coming into the foreground just a bit more. 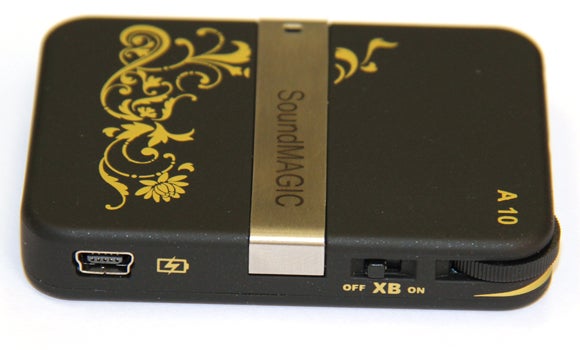 The tone of the A10 is warmer
than than our FiiO E7, although whether that’s a bad thing or not will be a
matter of preference. Plus, at this level of portability and this price point,
it’s nigh impossible to find a totally neutral amplifier. The low-end can be
boosted further if you want to with an XB switch on the side of the A10 but we
never felt the need to use it, and it doesn’t give much of a boost anyway (we
could see it being useful with headphones that have a weaker bass response than
those we were using).

The A10 isn’t as good
value as the competition, as it lacks the FiiO’s built-in DAC. However, the
SoundMAGIC amplifier is significantly smaller, and more portable, so it proves
a different enough proposition not to suffer from its reduced feature set. Just
bear in mind you’re paying more for less – both feature and size-wise.