Sony’s XB series of headphones has been a high street mainstay for
years, and now the PS3 and KDL-40HX853 manufacturer back with a range of new models including the Sony
MDR-XB600. When they sell for well under Beats by Dre money, and
the “XB” of their name stands for “Xtra Bass”, they’re an obvious fit
for the HMVs of this world. Sony has tried to class-up the XB range with
these new sets, but has it worked?

Sony MDR-XB600 Design
The
previous signature of the Xtra Bass Sony headphones of old was gigantic
oversized earpads that tended to make all but the coolest people look
like plonkers. Sony has sensibly changed its approach. The padding of
the Sony MDR-XB600 has slimmed down, and the slightly over-the-top
silver trim has been reduced. Now, each earcup is finished in a disc of
flat glossy black plastic ringed with a 4mm silver outline. 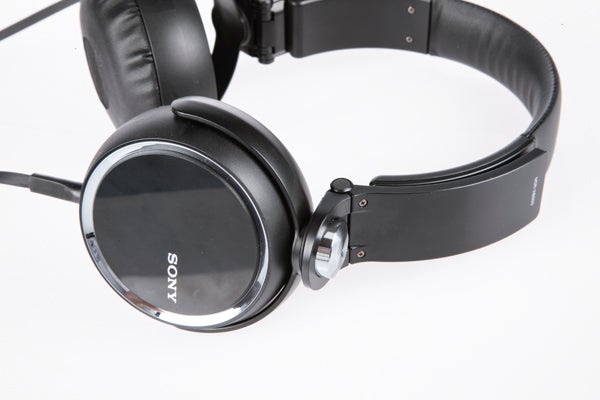 They’re
less distinctive than the last-generation of Xtra Bass Sony headphones,
but they’re also more normal-looking too. There are a few elements that
mark them out as street “fashion” cans, though.

A volume
knob-like nugget of silver sits at the join between the earcup and the
headband, and the design of the headband is informed by conspicuous styling too,
with a consistent thick band all the way across. There are some
curiously missing bits here, mind. Image-conscious headphones often use a
single point of entry for the cable, but here it jams into both
earcups. The headphone cable is non-removable too, where the current
trend is to use the removable type whenever possible. 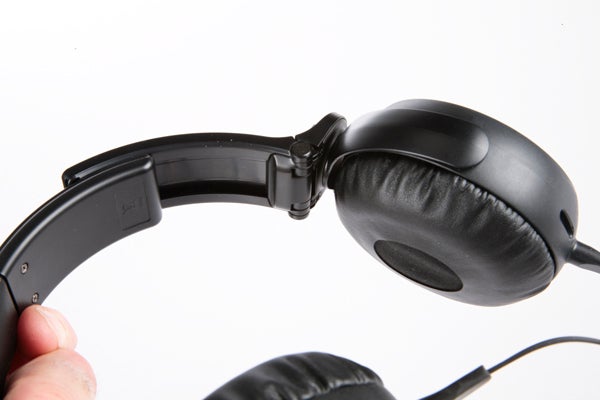 As a
relatively inexpensive set of headphones, the Sony MDR-XB600 are
constructed out of non-premium materials. The frame is plastic, the
parts that are coloured to look like metal are plastic and all the
“leather” is synthetic. They’re well-constructed, though, with minimal
creak and a handy – plus discreet – folding design that makes them easy
to dump into a bag.

Sony MDR-XB600 Comfort and Isolation
The
padding of the Sony MDR-XB600 is generous among on-ear heapdhones, if
not within the XB series. Up top, the headband foam is quite light, but
it’s not an issue because there’s little weight to these plastic
headphones. 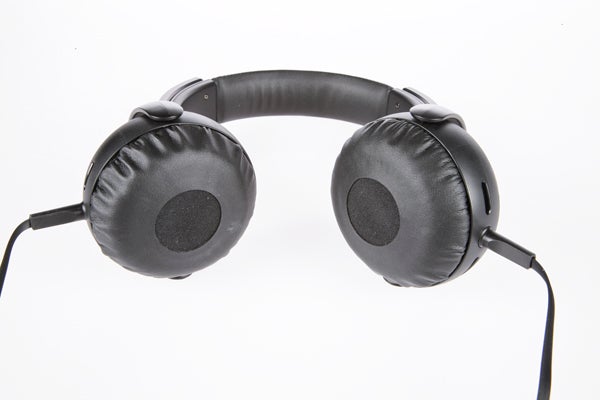 Earcup foam is much more generous, making these
among the more comfortable sub-£100 on-ear pairs. However, they could be
better. The innards of the pads make for effective cushions, but the
synthetic leather on the outside isn’t all that soft, with a
recognisably plastic feel. Next to the rival Philips CitiScape Downtown
on-ears, they don’t seem all that luxurious. 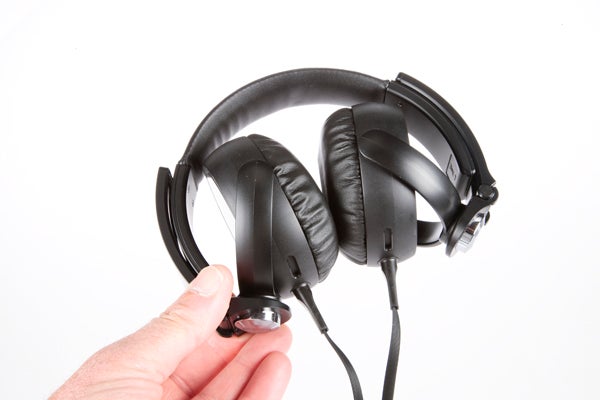 Getting a good fit
with the Sony MDR-XB600 is reassuringly easy, as the ear cups swivel
freely both horizontally and vertically, letting them fit the shape of your
head instantly. The style of padding affords the Sony MDR-XB600 decent
noise isolation, as there’s just a small netted gap in the centre of
each pad where the sound escapes through. They’ll have little trouble
competing with the sound of bus and train engines.

Sony MDR-XB600 Accessories
There’s no ceremony to the Sony MDR-XB600 headphones. You get a box, but that’s about it. There’s no included carry case, no adapters and no inbuilt hands-free kit or remote control. These are headphones, simple as that.

Sony MDR-XB600 Sound Quality
Belonging to a family of headphones called “Xtra Bass”, it’s hard to come to the Sony MDR-XB600 not knowing what to expect. These are bassy headphones, and as is often the case with such focus headphones as these, the bass can become destructive. 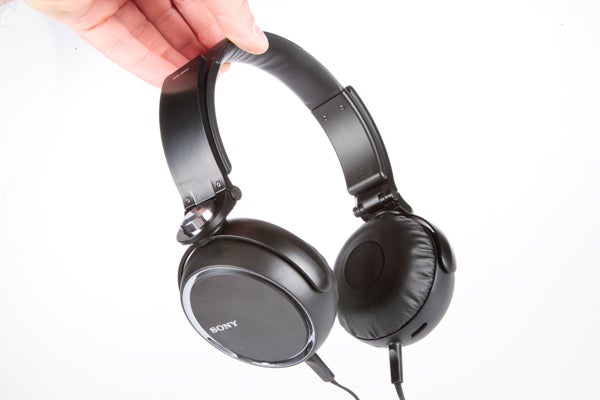 For a headphone to pull off the big bass sound, it needs to have sufficient control and separation to avoid the low-end dominating the rest of the sound. There’s a significant improvement in clarity over the last range of XB headphones we listened to, but there’s still not enough control.

The bass booms out, muddling arrangements, unbalancing the sound and often spoiling the rhythm of beat-based music. Contrary to what some people think, a bassy headphone isn’t always good for bassy music. 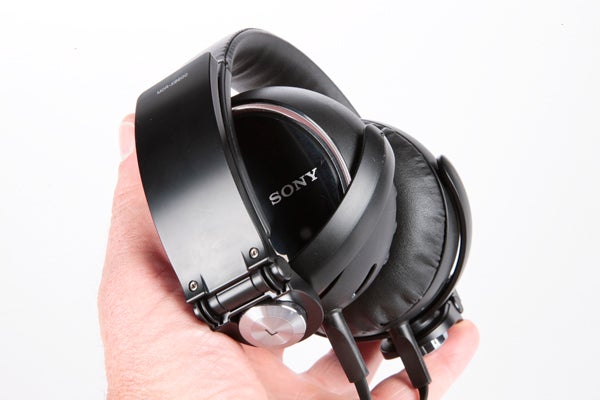 The Sony MDR-XB600 are not a dead loss, though. While the low-end rules here, the treble is surprisingly sweet and smooth. There’s too much boom to the sound here, but they’re not muggy-sounding, veiled headphones.

Thanks to the bloated low-end, separation between instruments isn’t hugely impressive, but the soundstage is relatively wide. Nevertheless, we still find that with music made using real instruments in particular – rather than electronic ones – there’s a certain claustrophobic effect caused by the rumblesome bass that’s holds the music back. And it can verge upon sounding distorted. 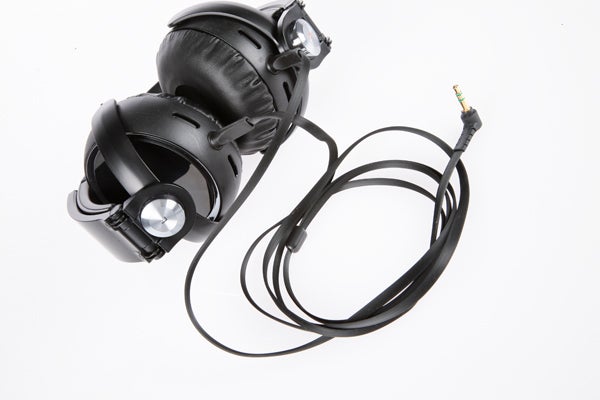 Sony MDR-XB600 Verdict
The Sony MDR-XB600 represent a solid half-step forward for the Xtra Bass headphone series from Sony. Their looks are a little toned-down, comfort is good and sonic clarity seems to have been improved. However, the low-end lacks the control we like to hear in a bass-heavy headphone, resulting in to much bloating and boominess. You can get higher-quality sound at the price if you’re after exciting bass.