Introduction
DJ headphones are a funny breed. What they are meant to be is headphones used by DJs to monitor tunes while performing. What that frequently translates to these days, however, is a street-style set with way too much bass and poor sonic balance. But are the Sony MDR-V55 worthy of what the DJ headphone title should mean? For the most part, they are.

Sony MDR-V55 Design and Comfort
There are three main physical criteria for a DJ headphone set like the Sony MDR-V55. They need to be fairly robust, should offer at least some isolation and have to be pretty portable. 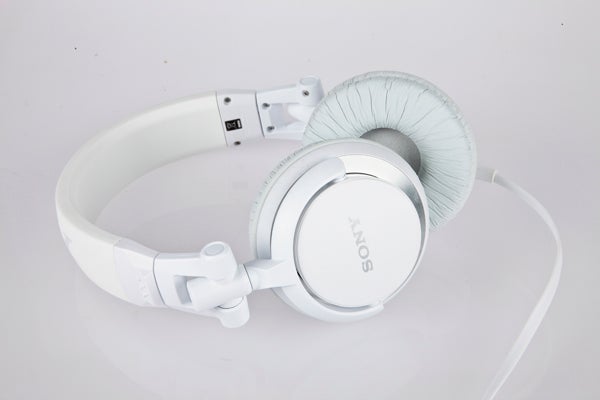 These headphones come up trumps on most counts, but do end up alienating some “normal” buyers in the process. Point one – they use fairly large, hard plastic arms that join the cups to the headband. They feel robust enough, but the Sony MDR-V55 are some of the creakiest non-budget headphones we’ve used in quite some time. They may survive the bumps and scrapes expected, but they don’t leave a great first impression. They even creak noisily if you move your head, and it can sound like you’re in the hull of a creaky old galleon at times. 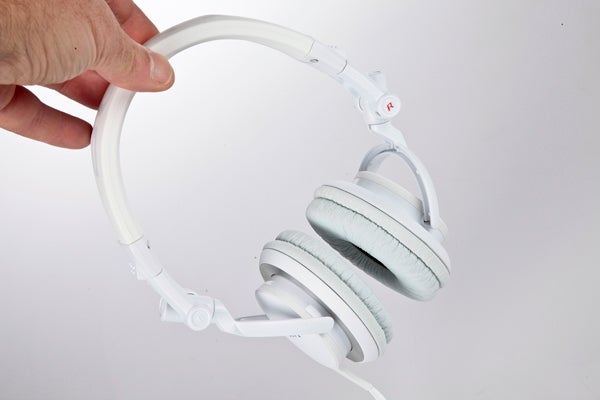 The headband tells a similar story. It’s coated in rubber to help the headphones stay in place on your head, and the inner structure is minimal at the top arch, letting them flex much, much more than the average pair. The problem? It’s not comfortable. Bafflingly, there’s more padding on the top of the headband than the bit that rests on your head, leaving just a thin layer of rubber between you and the metal skeleton of the band.

The Sony MDR-V55 earpads don’t help out much either. Mid-softness foam topped with a thin layer of basic – and again thin – plastic-leather, they don’t offer any of the bouncy comfort of the XB-series models, such as the Sony MDR-XB500.

Give them time to bed in and they don’t feel too bad, as the hinged designed makes them fit to your head easily. It’s two minutes of “these don’t feel too great”, followed by a relatively easy wear, but these are far from the most comfortable headphones at the price. There are some practical benefits to the design, though. The cups fold up right into the headband and the ultra-flexible headband lets you scrunch them up into quite a tight bundle. Sadly, though, there’s no bag included with the cans. 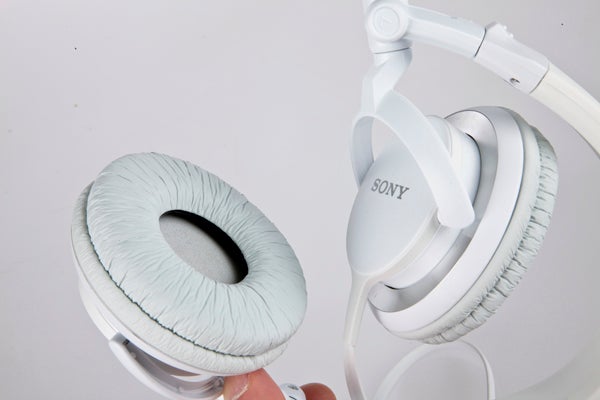 Despite their fairly large size, the Sony MDR-V55 are on-ear headphones. The pads rest directly on your ears rather than around them, which will cause your ears to heat up on a warm day – or during a hot gig. Again, this doesn’t help the comfort factor. 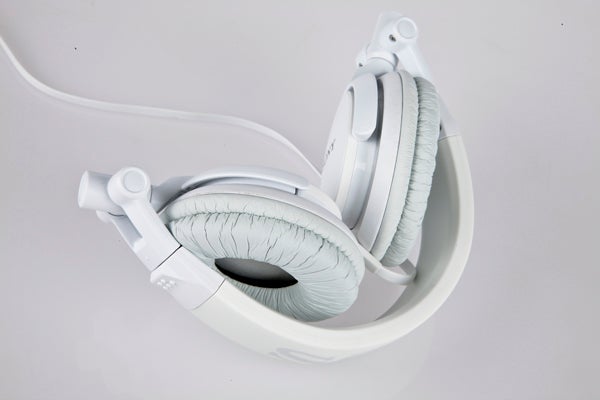 The Sony MDR-V55 cable is non-removable and has a flat design, which we assume is more for the look than anything else. Flat cables can reduce tangling, which isn’t too much of an issue here, but they are also quite trendy at the moment, along with fabric-braided cabling.

Sony MDR-V55 Sound Quality
We’re not all that impressed with the build and comfort of the Sony MDR-V55. The fit’s fine, but there’s no soft luxury here. It’s a good job that they start winning your attention back as soon as you start playing tunes through them. These headphones use 40mm neodymium drivers and claim to be able to fire out frequencies up to 25,000Hz.

As a DJ style pair of headphones, it’s no surprise that the Sony MDR-V55 are fairly bass-heavy. However, bass control and the curves of the lower-end of the frequency spectrum are remarkably well-handled for a pretty affordable set like this. 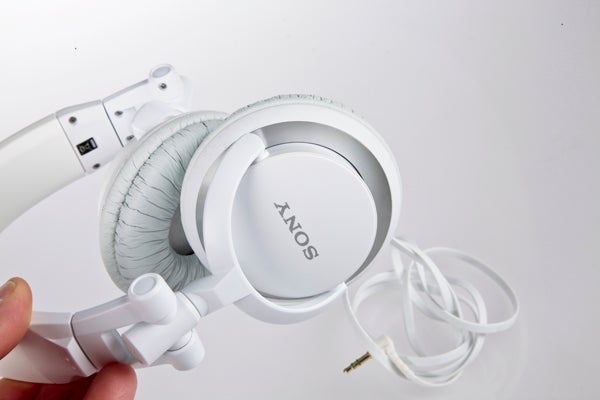 What so often kills bassy headphones is that there’s a big hump in the upper bass/low mids, which clutters up the joint, making them sound incoherent. Here there’s only a very slight emphasis in that part of the range, with the meat of the bassy tone supplied by deeper sound.

As such, the Sony MDR-V55 headphones offer significantly better mid-range clarity than the headphones of the XB (extra bass) range, which sits along these cans in price terms, but is a little more accessible for the average Joe.

The bass floor is impressively low too, providing a very satisfying thump to the kicks drum beats of electronic tunes. These headphones are best described as “a lot of fun”, and it’s the sort of fun that shouldn’t turn off audio pedants too much – the best kind. 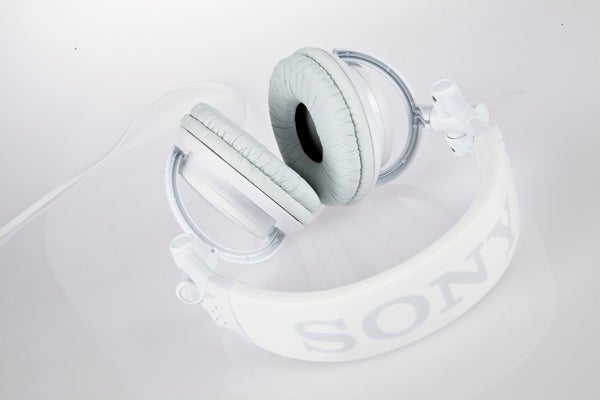 Treble performance is good too, with a forthright presence that partners up well with the full bass to provide a quite dynamic and vibrant signature. There’s still a significant bass skew in the Sony MDR-V55, though, so if neutral sound is what you’re after, the Sony MDR-ZX700 are a better bet.

Bass-heavy headphones at this relatively affordable price tend to fail to hit the mark on sonics. Too often, the low-end obsession leads to a muggy character that doesn’t hold up to close inspection. In providing a fat bottom-end as well as decent clarity and separation, the Sony MDR-V55 buck this trend. The treble could be a little smoother, but these are not harsh-sounding headphones either. 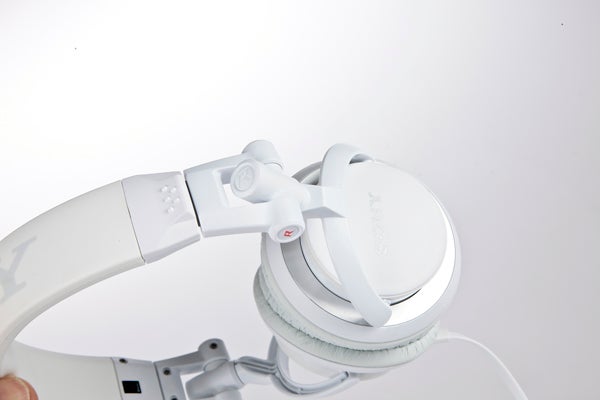 If only the same attention had been paid to the comfort factor, they’d be easy to recommend. However, as-is we recommend seeing if you can wrap a pair around your noggin before parting with the 50-odd quid these otherwise pretty great headphones cost.

Sony MDR-V55 Verdict
There are two main questions to ask of any headphone of any type – are they comfortable? And do they sound good? The Sony MDR-V55 do just fine on the sound front, with a powerful bass-heavy sound that doesn’t trade low-end grunt for clarity. Unfortunately, they’re not the most comfy headphones around and our review sample creaks like a crypt door in a horror movie.