Compared to TV technology, the Sony HMZ-T3W is a feat of impressive miniaturisation. Sony claims that its postage-stamp-size OLED displays offer the experience of a 750-inch screen that is 65 feet away. That is, handily enough, similar to a mid-size cinema screen. And it doesn’t feel like a complete marketing fabrication in use.

Unlike the Oculus Rift, the Sony HMZ-T3W uses a field of view that’s much more ‘cinema’ than VR. You get a large 16:9 letterbox frame that takes up a good chunk of your vision, but not all of it. The rest is black, although the headset doesn’t isolate you like some rivals, leaving the very bottom of your vision as-is. There are some rubbery attachments to obscure your peripheral vision further, but we didn’t get a chance to try these. 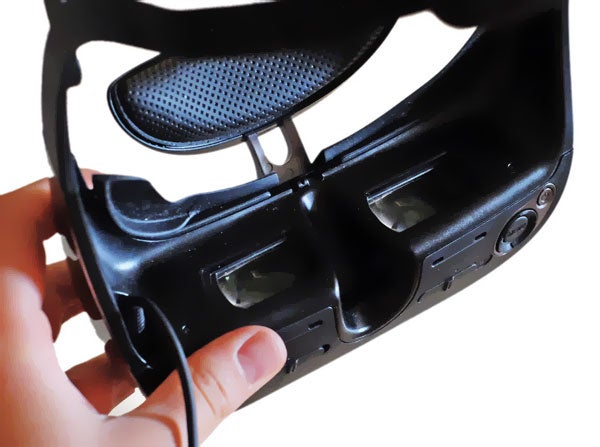 The lens optics ensure it don’t feel as though the screen is right in front of your eyes, and while the lesser field of view may put off some of you, it means the image isn’t hopelessly blocky.

Many of you may be disappointed this is a 720p headset, rather than a Full HD one. The latest version of Oculus Rift gives you 960 (horizontal) x 1080 (vertical) pixels per eye, while the HMZ-T3W offers 1,280 (horizontal) x 720 (vertical). They’re pretty similar, and the perceived sharpness of the Sony is actually a lot better, thanks to the more conservative field of view. Image quality is pretty great too.

Using OLED panels means the HMZ-T3W’s contrast and black levels are excellent, and motion is well-handled. As the headset does not use any kind of head tracking, motion sickness shouldn’t be an issue for many of you, but the effectively instant response times of OLED ensure there’s little motion blur. There is a tiny bit, though, thanks to the seemingly sample-and-hold style of these displays. This is where one frame is displayed right up until the next is called for, something our eyes perceive as minor motion blur – if not anywhere near as bad as most LCDs.

There are two remaining image quality issues. While they don’t entirely spoil the experience, they are a little hard to stomach at £1300.

The first is one we’ve already covered – resolution. Sharpness is respectable, but image quality obsessives will be able to spot the missing information when, for example, watching a Blu-ray. 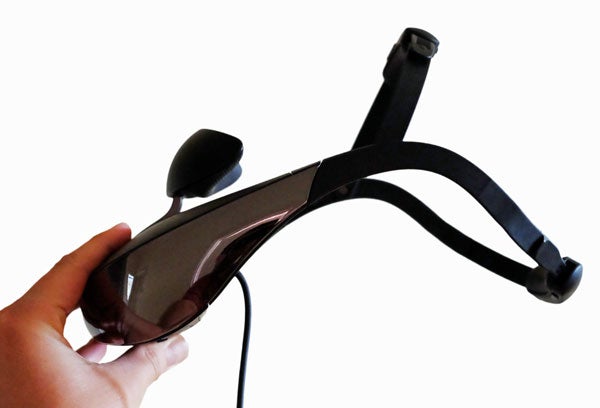 I also had real trouble getting both eyes looking sharp across the field. The edges of each field tend to get slightly blurry, meaning it really is the composite of both eyes’ information that is used to produce a relatively sharp image.

There are little sliders to move the lenses to compensate for differences in the spaces between people’s eyes, but no optical compensation for short-sightedness or astigmatism. You’ll need to keep your contacts in, or your glasses on. I’m fairly sure the edge of field blur issues aren’t down to my astigmatism either, but a demonstration of how hard it is to get the HMZ-T3W’s optics aligned perfectly.

Where the Sony HMZ-T3W wins back some cred is 3D. It offers some of the best 3D experiences currently available, especially for games.

As it transmits different images directly to each eye, the execution of 3D is effectively perfect, and the super-fast response times of OLED screens come to the fore once more. We tried a bunch of different 3D games and movies, and PS3 titles like Wipeout and Shadow of the Colossus offer the kind of immersion only the very, very best TVs can come close to.

It’s almost enough to make you wish 3D gaming wasn’t such a fad. But perhaps it will come back around once Project Morpheus gets closer to release. 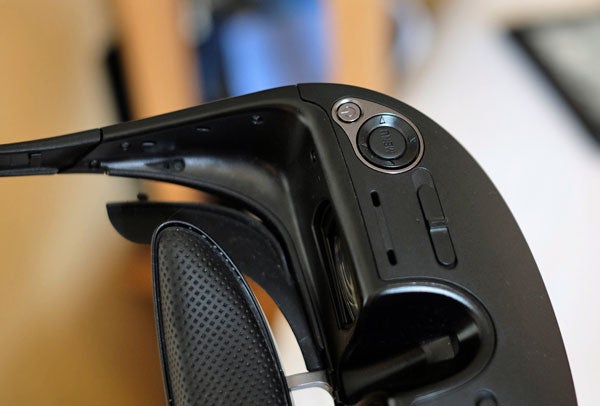 The HMZ-T3W sensibly uses a 3.5mm headphone jack rather than inbuilt speakers. However, you do get a high-end pair of earphones as standard.

They plug into a socket right next to the breakout box cable on the headset.

Sony makes a lot of noise about how the HMZ-T3W offers 7.1 surround, but it is – of course – virtual. It’s not going to really replicate a proper cinema-style surround system and in pure audio fidelity terms you’re better off without it. It tends to make the timbre of voices sound a little unnatural. However, with your own headphones or the bundled ones sound quality is perfectly good. 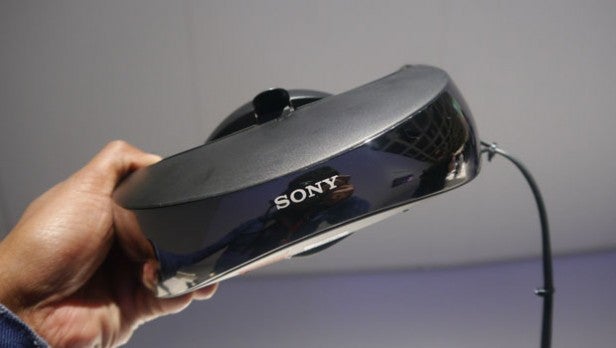 Should I buy the Sony HMZ-T3W?

Most people shouldn’t buy the Sony HMZ-T3W. At this point it’s too expensive and comfort issues mean we can’t imagine many people switching from a TV to using this every day. However, that doesn’t mean this is not good.

This is the class-leading video headset at present in terms of image quality and functionality, and that’s something that may not change until things like Project Morpheus or Oculus Rift come out. And they are a bit different anyway, being VR rather than video headsets.

We can’t be entirely kind about the HMZ-T3W, but that doesn’t mean it is anything less than a sterling effort, and something that Sony deserves a round of applause for tackling. It’s something Sony has done many times throughout consumer electronics too, with cameras like the Sony A7, with the 4K Ultra Short Throw projector, and we hope it will do with the upcoming Project Morpheus.

If Sony takes what is great about the HMZ-T3W and fits it into a slightly more accessible, cheaper package that encourages 3D game development with the PS4’s Project Morpheus, it could be a real winner. If one that’ll still mostly appeal to geekier fellows.

The Sony HMZ-T3W isn’t for everyone thanks to its high price and tricky fit. However, it is a good starting place for what to expect from the Project Morpheus headset, and makes a good case for 3D VR gaming.

Next, read our Project Morpheus vs Oculus Rift comparison