What is the Sony HMZ-T3W?

The HMZ-T3W is Sony’s latest Personal Viewer headset. It’s one of Sony’s most niche consumer electronics lines, but also one of the most interesting for tech fiends.

The Sony HMZ-T3W is also highly likely to be a design and hardware inspiration for the Project Morpheus PS4 virtual reality headset when it eventually goes on sale.

It’s therefore doubly important that we find out whether it’s any good.

Is it? Yes, in several respects it’s a solid argument for this sort of technology. But the high £1,300 price and seriously fiddly fit means this won’t – and shouldn’t – lure in too many movie and gaming fans just yet. 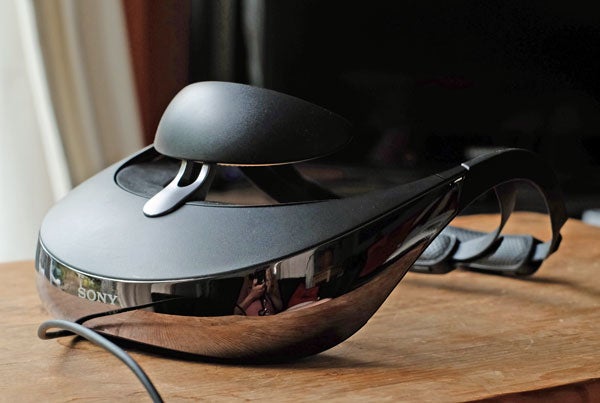 While it looks futuristic – in an 80s-90s way – the way the Sony HMZ-T3W works doesn’t really need all that much explanation. It’s a headset that puts a tiny little 720p screen in front of each of your eyes, with a middle-man lens hiding that the displays are quite so small, quite so near to your eyes.

We’ve tried out a bunch of these kinds of headsets in the past. And most have been rubbish.

However, the Sony HMZ-T3W is the most successful attempt we’ve reviewed to date, not least because this is Sony’s fourth attempt at the idea. Until things like Project Morpheus and Oculus Rift are actually available for the average person to buy, this is where it is at, video headset-wise.

A few issues common to this category remain, though. The most obvious: the look. 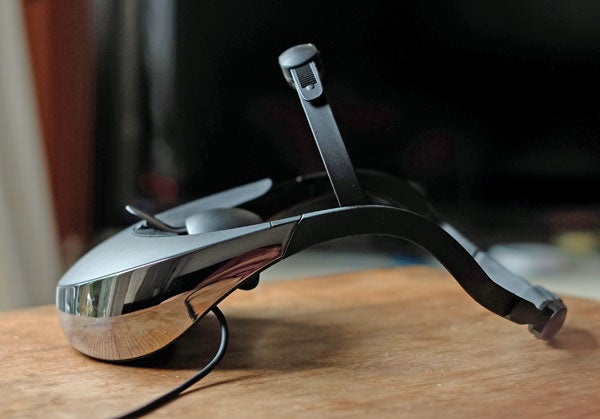 With a smoky chrome front panel, there is a hint of typical Sony ‘cool’ to the HMZ-T3W, but Sony’s marketing images of hip young business types wearing one of these on a plane seems hopelessly optimistic. At least among British people.

The HMZ-T3W is big, quite bulky and will earn you as much attention as singing The Sound of Music tunes at full volume while walking down a packed high street.

For the lounge or bedroom-bound cinema/gaming thrillseeker, though, it’s the Sony HMZ-T3W’s fit that is the issue.

While the plastic headset is reasonably light and there are pads to clamp your head at three different points, for even weight distribution, getting a good fit can be a long and uncomfortable process.

This alone stops it from being something you can use casually unless you’re the only person who is going to use it – any alteration of the rear straps means you are back to square one.

You need to be quite precise about the positioning of your eyes too, as any off-axis positioning makes the image look blurred. 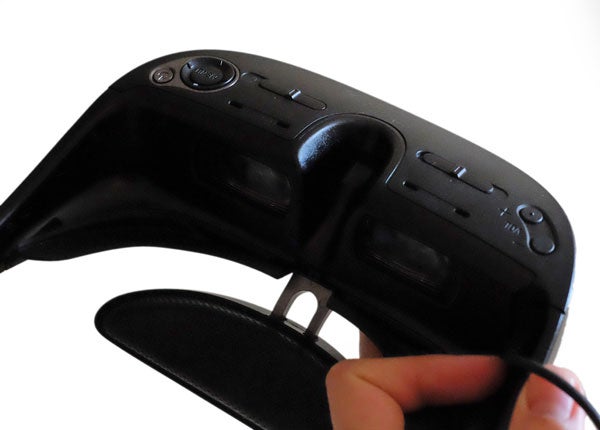 Unlike some headsets, the HMZ-T3W isn’t designed to put any pressure on your nose whatsoever. While the bridge of your nose is an obvious place to put glasses, your nose cartilage is just too sensitive for anything a bit bulkier and heavier like this.

Instead, there are pads that rest on the back and top of your head, and on your forehead. Despite Sony’s best efforts, the headset still feels a bit front-heavy, meaning you have to be careful about how you sit if you want to avoid neckache.

The vision of this gadget as a one-stop video consumption platform is also derailed a bit by the realities of how you have to connect the thing. A wire comes out of the left hand-side of the HMZ-T3W connecting to a breakout box that houses the unit’s battery and the HDMI socket, which lets you connect to just about any modern “under the TV” bit of home entertainment kit. 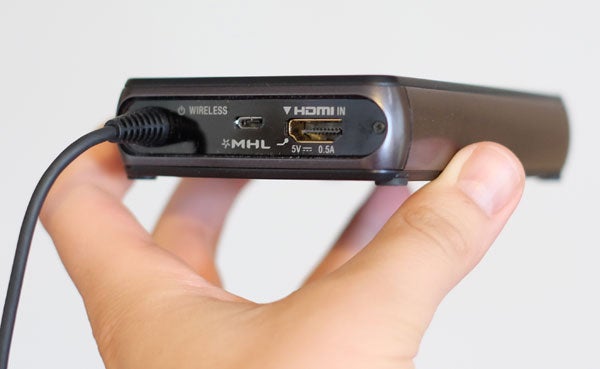 Sony also supplies an HDMI bridge/switcher to act as another node between the headset and your setup, because most of us don’t use 10m HDMI cables. Here’s where the ‘w’ bit of the HMZ-T3W name comes in too.

The connection between the breakout box and HDMI switch can be either wired or wireless, using WirelessHD, a low-latency wireless transfer standard.

It’s super-neat, but takes the battery life down from seven hours to a much less handy three hours. And if there’s anything covering the battery box, the reception goes right down the toilet.

Still, if you have a games console or Blu-ray player this means you can use the headset in bed – something to which the design is surprisingly well-suited.

On the other hand, if you are keen on taking the HMZ-T3 on a long flight, seven hours is pretty good stamina – which is what you get when using the headset wired. And the microUSB port on the battery box is MHL-compliant, making it all the easier to hook up to an MHL-compatible phone. Many Android phones use MHL these days.