The usual way of things in the AV world is that when a second generation of a product gets launched, it’s cheaper than the first. Or at worst, the same price. Yet with the replacement for its critically acclaimed VPL-VW100 projector, the VW200, Sony has actually upped the price from £7,000 to a cool £8,500. Yowza! Here’s hoping, then, that the VW200 has enough extra picture quality or features – or both – to make such a price hike palatable.


There’s certainly no denying that it looks a million dollars. With its striking gloss-blue top and side panels wrapped around a diamond shaped and sumptuously metallic front plate, it’s quite possibly the prettiest projector ever. The only downsides are that it’s perhaps rather large and intimidating for a living room installation, and also extremely heavy – so if you’re going to ceiling mount it, make sure you get it done professionally! 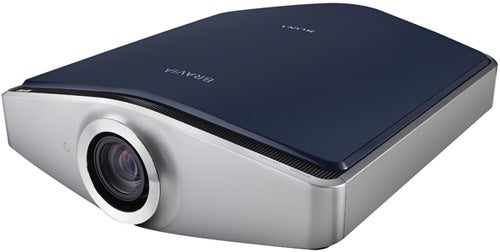 After this impeccable start, though, the VW200 surprisingly blots its copy book by only providing two HDMIs – surely at this price it should have three? To make matters worse, you also only get one set of component jacks when some projectors costing a fraction as much manage two. Hmm.


On the upside, both HDMIs are built to the latest v1.3 specification, and will take the ‘pure’ 1080p/24fps feeds now available from the vast majority of Blu-ray players. Plus you get a PC jack, a 12V trigger output for driving a motorised screen, an RS-232 port for hardwired remote control, and an Ethernet port for network connection. 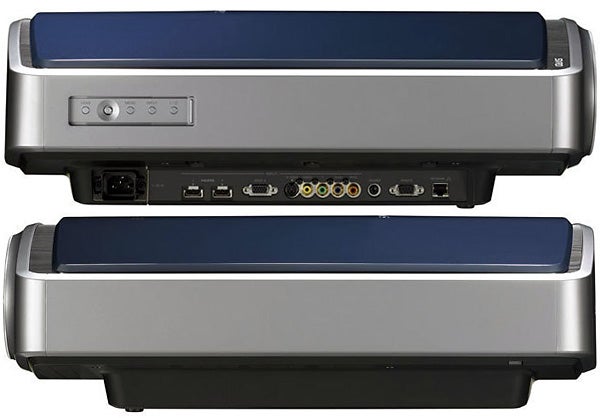 As with its VW100 predecessor, the VW200 uses Sony’s proprietary SXRD technology. This is essentially a refinement of Liquid Crystal on Silicon (LCOS) technology; a fast-response system also notable for its ability to cram ridiculous amounts of pixels onto extremely small chipsets. As a result, it comes as little surprise to find the VW200 claiming a full HD 1,920 x 1,080 resolution.


In fact, Sony claims to have got the pixel ‘pitch’ (how far the pixels are apart) down to an incredibly small level for the VW200, a fact which should mean you get a perfectly smooth picture that doesn’t suffer with ‘blanking lines’ or the so-called chicken wire effect, whereby the structure of the projection panels becomes manifest in the final picture.

Driving the SXRD chipset is a rather unusual 400W Xenon lamp, chosen by Sony for two reasons. First, Xenon lamps are scientifically proven to deliver a wider colour range than ordinary lamps, and second, its huge power handling should prove helpful in enabling the VW200 to drive really large screens.


There is one rather hefty downside to the Xenon lamp, though: its cost. A recent check for this review found replacement lamps costing you a minimum of £600 – way more than replacement standard lamps. And with a new lamp being required every 2,500-3,500 hours on average, heavy-duty users really could be looking at some pretty high running costs even after they’ve found the £8,500 necessary to buy the projector in the first place.


Heading into the VW200’s onscreen menus, the potential reasons for its price hike over its predecessor start to become easier to comprehend. For if there’s a projector out there with more features and user-adjustments, we ain’t seen it.

Frankly we don’t have the time or the sheer will to cover absolutely everything on offer, but we’ll try and give you a sense of the most intriguing stuff, starting with a new, improved dynamic iris system that claims to deliver a huge contrast ratio of 35,000:1. 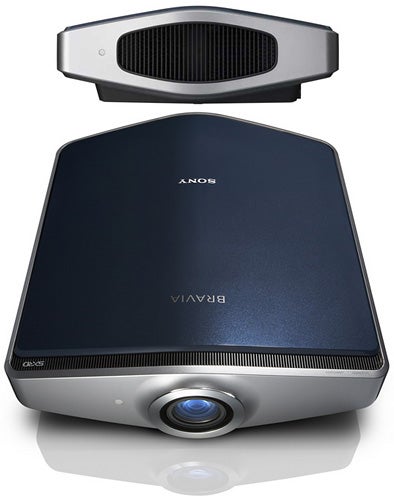 Obviously getting the deepest black levels from this dynamic iris system means the projector has to ‘iris out’ considerable amounts of the image’s brightness during dark scenes. But this shouldn’t in principle damage picture quality too badly provided that the iris’s machinations aren’t too visible in the picture in the form of distracting ‘jumps’ in brightness.


Another notable inclusion is Sony’s ‘24p True Cinema’ feature for advanced handling of 24p sources, supported on the image processing front by the latest version of Sony’s Bravia Engine Pro. The Pro bit designates this to be the top level member of the Bravia Engine family, and as such it should have the processing tools to improve such picture areas as colour, fine detailing, clarity, noise reduction and scaling more substantially than any other Sony video device.


Probably the single most intriguing element of the VW200’s features, though, is its new MotionFlow system, comprising two elements: Motion Enhancement and the terrifyingly sinister-sounding Dark Insertion.


The Motion Enhancement element calculates and inserts extra frames of image data between the ‘real’ ones from a source in a bid to make motion look smoother and clearer. The Dark Insertion bit effectively adds additional dark frames between the brighter ‘real’ ones coming in from your source. Why? Because doing so supposedly recreates the sensation of watching a 24fps film presentation at your local cinema, and helps your eyes and brain process motion in the picture more naturally.

We’ll get to what I think of these clever-sounding new features in a moment, but first I probably ought to put your mind at ease if you’re becoming concerned about not having the technical wherewithal to cope with everything the VW200 has to offer. For a start, the projector’s remote control and onscreen menus are both very impressively designed for the most part, making the basics easy to find and the more complicated stuff purely optional. It’s worth adding, too, that a healthy 1.8x zoom should help the projector adapt itself to a fairly wide array of different room sizes.


Given how much I liked the VW100, and in view of the VW200’s greater price and specification, I fully expected to be blown away by what the newer model can do. Which might explain why I came away feeling just a little disappointed.

For starters, I found myself really quite nonplussed by the MotionFlow processing. Looking at each of its elements in turn, I found the Motion Enhancement feature tended to generate some quite overt shimmering artefacts around the edges of moving objects. These are especially noticeable if you set the feature to its highest level of potency and play an HD console game such as Uncharted: Drake’s Fortune on the PS3.


OK, yes, the processing does make motion look far more fluid and sharp. But the artefacts are regularly visible to some extent on pretty much any Motion Enhancement setting, and with whatever source you throw at it, HD or otherwise.


Of course, you can always deactivate Motion Enhancement entirely. But if you do, then the motion in the picture tends to look marginally blurred. In other words, you can’t quite get motion looking perfect no matter what you try.


As for the Dark Insertion feature, I just found this weird. On the highest setting pictures start to become nearly unwatchable because the image appears to ‘pulsate’, for want of a better description.


At least I could start to get the point of Dark Insertion on the feature’s lowest setting, as the gentle flickering effect does bear a passing resemblance to the experience of watching projected celluloid. But I still found the effect too pronounced for comfort, even after trying to get used to it for a good few hours.

Having started off in a negative frame of mind, I might as well add here that, in the occasional scene, the projector’s dynamic iris system caused noticeable brightness reductions and increases as it tried to adapt to changes in the image’s dark levels.


From here on in, though, the news is pretty much universally good. Colours, for instance, are nothing short of magnificent. With the image calibrated well, the curiously cartoonish palette of Rainbow Six Vegas 2 on the Xbox 360 looks more radiant and intense than on any other single chip projector I can think of.


What’s more, unleashed on something rather subtler in flavour, such as the Blu-ray of ”Blade Runner”, it delivers a range of colours and a naturalism of tone that’s again unmatched without spending truly megabucks. 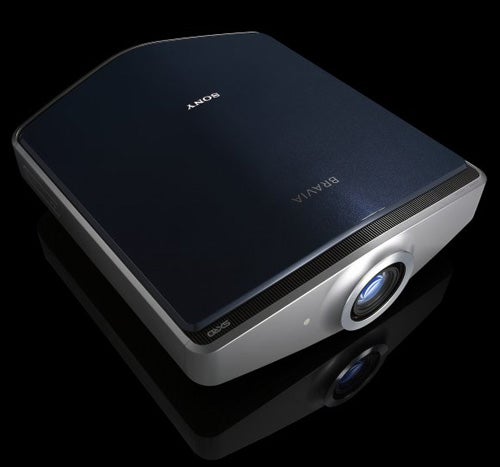 When it comes to black level response, here again the VW200 is excellent, even without the dynamic iris system engaged. In other words, you don’t have to worry about visible brightness ‘shifts’ in order to still enjoy excellent black levels.


The Bravia Engine Pro system, meanwhile, is to be congratulated for how well it scales images of whatever resolution up to the 1,920 x 1,080 pixel count, and for the way it ensures that 1080-line HD sources look mesmerisingly sharp and detailed, with practically no trace of common noise types such as grain and dot crawl.


As two final plus points, the VW200 runs extremely quietly for such a high-powered projector, and manages to produce images of remarkable brightness considering how deep its native black levels are.


In most ways the VW200 is a really excellent performer, and the scope of its ambition is truly breathtaking. Yet somehow, with JVC’s stunning and actually very similar HD100 model (look for a review of this in the coming days) available for under £5k, the VW200 just doesn’t quite do enough to convince me that it’s truly worth its money – especially since some of the fancy features that presumably contribute to its cost just aren’t particularly convincing.