Like most sensible people, I liked Rainbow Six: Vegas a lot. It took a slightly tired tactical shooter series and gave it a fresh, more casual gamer friendly spin. You still had to balance the demands of squad command and shooting, but the slick, streamlined controls made this a pleasure, while the fast, intuitive cover system and smart AI pushed the gunplay up to a whole new level. Best of all, the Sin City setting gave the game a sense of glamour that it hadn’t had before, taking you through recognisable locations and filling the screen with a brash neon cool. I remember saying at the time that this was the game where the Rainbow Six series turned a corner, breaking out of its hardcore following and embracing a wider audience. A few die-hards lamented this change of focus, but most of us were pleased that the series was finally having fun. 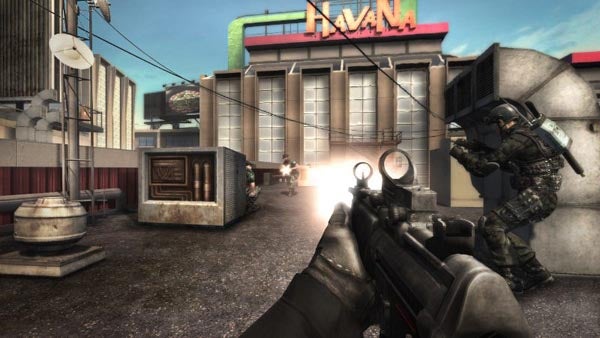 The sequel feels like an exercise in consolidation. “Did you like Vegas?” it seems to be saying, “well, here’s a bit more of the same.” As with last year’s sequel to GRAW, it can be a challenge to tell Vegas 2 apart from its forebear. I think the character models may be a little more detailed, there seems to be a fair bit more destructible scenery – good for fans of breaking glass – and the particle smoke and explosion effects may have been turned up a notch, but there’s not a lot of technical advance here. 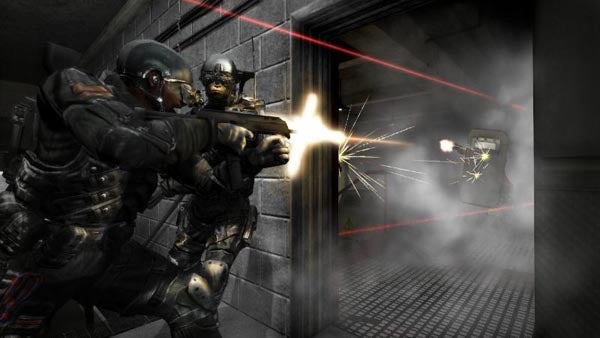 Of course, there doesn’t have to be providing the gameplay takes us somewhere new. This time – after the traditional tutorial come prologue – the deal is preventing more dubious South American terrorists from setting off a series of chemical weapons in the city. In practice, this means following the same basic routine as last time. You proceed from room to room or area to area, clearing each of nasty terrorists in the most effective way possible, and preferably without getting you or one of your two men killed. Your basic tactical options are also broadly similar. You can make an entrance through a door, using your handy snake-cam to preview the area and designate key targets before asking the boys to bang and clear, or you may be able to fast-rope or rappel in or split your forces so that you attack from one entrance while the chaps attack from another. Once in position, you can keep your team moving through cover and taking out the ‘tangos’ while dishing out plenty of hot lead yourself. As with Vegas 1, the emphasis isn’t so much on pre-planning as on making rapid tactical decisions and adjusting to new enemy threats. 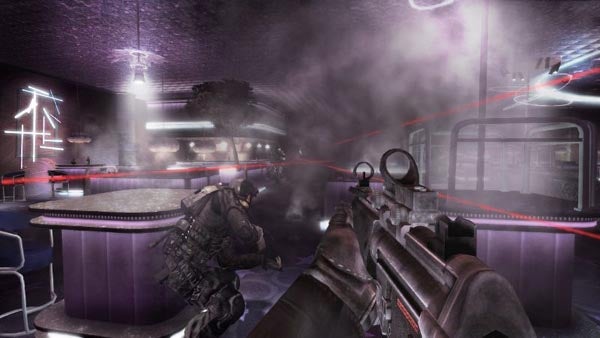 Admittedly, if Vegas 2 is still singing from the Vegas 1 hymn book, veterans may detect a slight change of emphasis. Ironically, the first Rainbow Six to feature a run control – more Battlefield-style sprint than Quake-style speed dash – is a less run-and-gun friendly game than its predecessor. Play it on anything above the easiest casual mode (and I really would recommend that you do) and Vegas 2 demands a more careful and considered style of play. Fail to make use of cover or employ your team effectively and you’ll be toast for the surprisingly cunning terrorist forces. This lot don’t go in for the predictable pop-in, pop-out routines of their more cretinous terrorist brethren, preferring to sneak towards you or vary their attacks so that, at times, it can be hard to bring them down. For much of the game, your own team deserve similar praise. They can clear a room of hostiles and seem more capable of covering each other than last time around. If you want to soften up the scum before picking off the hard-nuts yourself, these are the men for the job. It has to be said, however, that brain-power isn’t always in evidence. Why they’re incapable of healing each other without a direct order from you is a mystery. Why two highly trained operatives are incapable of walking past a barrel or broom without knocking it over is a matter for a development post-mortem. 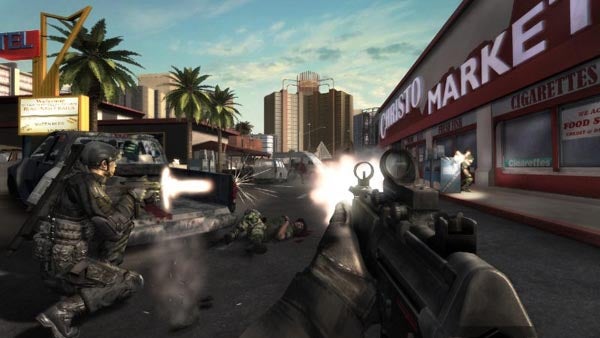 On the whole, though, Vegas 2 is a solid and consistent game. The problem is that it isn’t a great one. Vegas 2 has all the mechanics in place that Vegas 1 did – and enhanced them in a few cases – but the single player campaign isn’t actually quite as much fun. I’d start by blaming the setting. I guess Ubisoft felt that some change of milieu was a necessity for Vegas 2, but this has resulted in the perverse decision to leave casinos and night-clubs alone and focus on the industrial facilities, big civic buildings and convention centres off the main strip. It’s an interesting choice, and I’d have to admit there’s something satisfying about shoot outs in the very building where some of us at TrustedReviews have endured the CES or Comdex trade shows. Sadly, it’s one that’s resulted in a lot of fairly bland locations of the sort that we’re used to from other modern action games. Vegas 1 was special partly because it was in Vegas, so why remove the glitz and glamour. It’s telling that when the game returns to tacky night-clubs or showbiz theatres, the atmosphere picks up for a while. 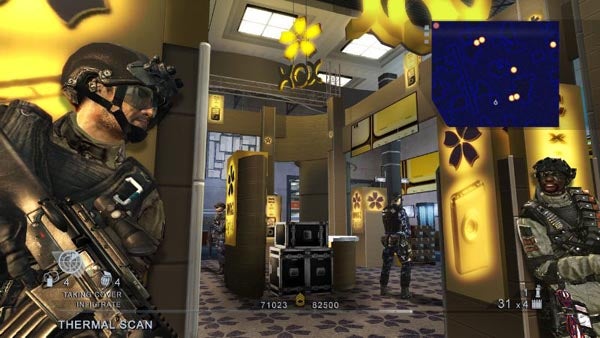 Next, let’s talk about the pacing. Vegas 2 delivers engaging tactical shoot-out scenario after engaging tactical shoot-out scenario, but after a while they blend into one another. The game grows more interesting as it throws in wider spaces or areas with several levels from which terrorists might attack, but for long stretches it feels monotonous. In effect, a game that seems desperate to create drama through its narrative, with buildings shattered and civilians killed off by the busload, seems incapable of creating it through its gameplay. While the ‘bang and clear’ gunplay still has its own weird tension, Vegas 2 rarely inspires any other response.

On the plus side, things improve once you take the game online. Some fans of Vegas 1 are bound to be disappointed that the co-operative version of the single-player campaign is now restricted to two players, not four, and that the second player is basically relegated to the role of an additional, non-commanding squaddie. All the same, playing through the story with a friend or stranger is a livelier, less predictable experience, and with all the cut-scenes and links in place this time it feels more like the game was designed with co-op in mind. Otherwise, online terrorist hunts and versus matches are as good as ever, with a fine selection of maps and game types – though it appears that online games are suffering from a few teething troubles at the moment. 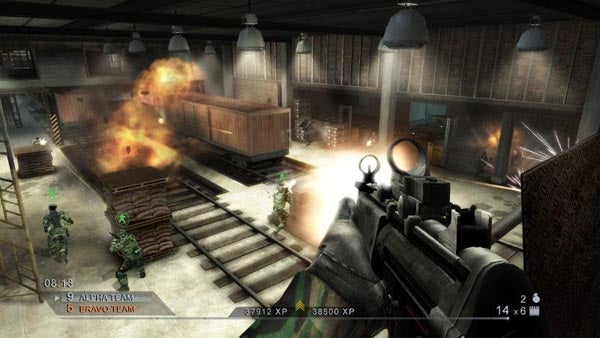 And it’s here that the game plays its trump card. Vegas introduced the idea of a persistent experience system, but Vegas 2 puts it right at the heart of the game. Every minor triumph – every headshot, every kill through scenery, every terrorist shot by your men – whether in single-player, co-op or online versus match, results in more experience points for your profile and eventually a higher level in the game’s Marksmanship, Assault and Close-Quarters disciplines. This in turn gives you access to new weapons, armour and items of apparel; not only giving you a slight edge in combat, but also showing those in the know that you are an armchair warrior to be reckoned with. Throw in one of the deepest character customisation options I’ve seen in an FPS and you have a game that feels a little like an MMO at times. It’s Vegas 2’s way of rewarding its most faithful fans. 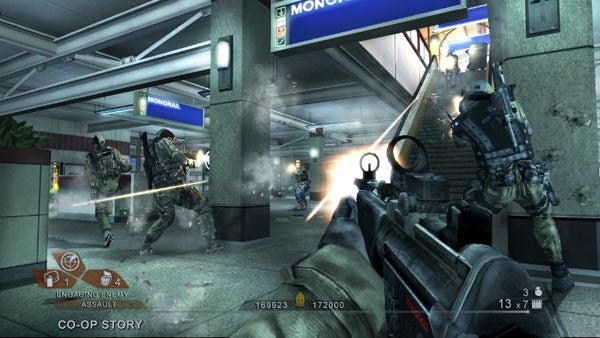 And in the end I suspect that’s what Vegas 2 is really all about. It’s not an essential game for casual shooter fans; rival FPS games offer a better single-player experience, and without practice you won’t last long enough in the online games to make playing them worthwhile. By anyone’s standards that’s a mild disappointment. However, if you really got into Vegas and played it long after the main campaign was over then the new instalment is definitely worth your while. Despite the loss of four-player co-op it’s on balance the better multi-player game, and I suspect the experience system will help the game build its own hardcore following. Not the darkest of days for Rainbow Six, then, but it would still be nice to see something as new and exciting as the first Vegas was next time around.


The single-player campaign doesn’t have the glamour or the thrills of the first Rainbow Six, but it still plays a solid tactical game. Luckily, the deep character customisation and levelling features make the online game a must for Vegas veterans.