Setting up the BDV-N7100W is easy – the colour coded plugs tell you what cable goes where and the rear speaker amp just needs plugging into the mains. The trickiest part is connecting the bases to the bottom of the satellites, as you need to feed the speakers through the holes before you screw them in. 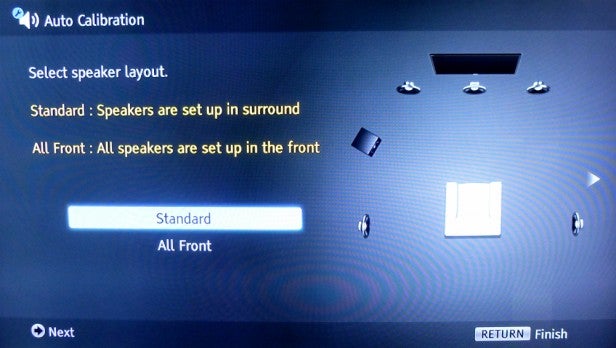 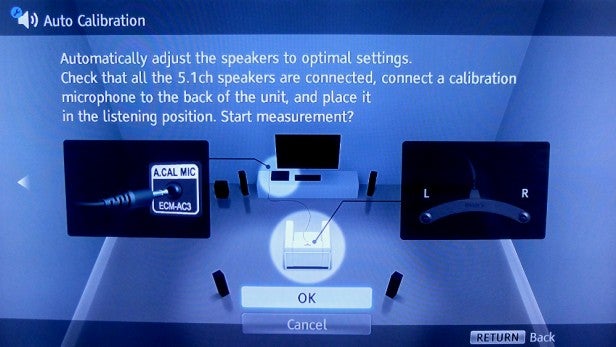 The built-in auto calibration system sets the speaker distances and levels for you using the supplied mic and series of test tones. You can calibrate the sound in two speaker arrangements – Standard and All Front, where all five satellites are placed at the front of the room. It’s quick and surprisingly accurate, but you can set them manually if you prefer. We also had no trouble getting online thanks to the clear onscreen instructions. 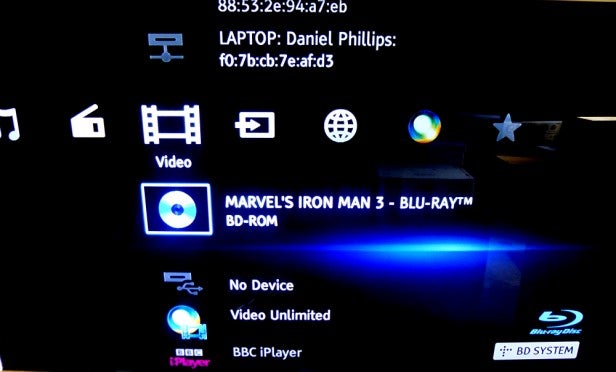 Sony’s Xross Media Bar is getting on a bit now, but is as slick and useable as ever. Its system of intersecting axes makes it easy to find the option you’re looking for, and it scrolls around with pleasing smoothness.

From here you can access most of the system’s online content – highlight Video, for example, and the relevant on-demand video apps appear in the list, as well the loaded Blu-ray disc and connected PCs. The same goes for the Music and Photo options. 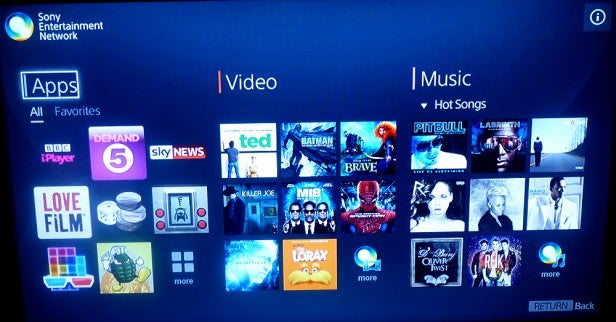 A separate Sony Entertainment Network menu displays all the available apps and Video/Music Unlimited content. The layout is brighter and jazzier than the home menu, using cover/poster art to illustrate each song or movie. 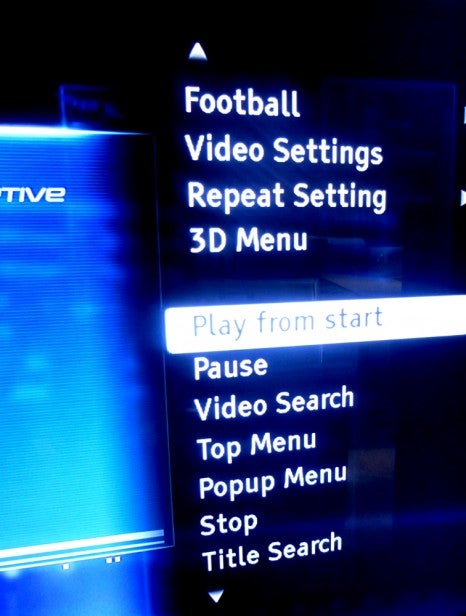 During playback the handy Options menu (above) lets you access disc features and video adjustments. There are presets for bright and theatre room viewing, Direct and Auto modes and two Custom settings that let you tweak the picture yourself. The settings are fairly detailed, offering Texture Remaster, Super Resolution, Contrast Remaster, Clear Black and noise reduction alongside the usual contrast, brightness, colour and hue settings.

Day-to-day use is slick thanks to the excellent remote. There’s a lot to cram in, but Sony pulls it off with a clever button arrangement. The most-used keys are placed directly under the thumb and the others are clearly labelled so they’re easy to find when you need them. The volume controls are too far down and it’s a little cluttered below the direction pad, but otherwise it’s a pleasure to use.

If you disagree, try controlling the system using Sony’s TV Side View app on a smartphone or tablet, which also acts as a mouse for web browsing.

Unlike rival all-in-one systems that use a sharper, edgier tone in the mids and highs to promote a sense of excitement, the BDV-N7100W takes a smoother and more measured approach. Yes it blasts out movie soundtracks with room-filling power and zips effects around the soundstage with a brisk, energetic feel, but there’s a distinct silkiness to the Sony’s sonics that makes it sound more like a decent separates system than a one-box job.

Those Magnetic Fluid drivers should take great credit for this. Their sound is clean and beautifully detailed, eking out the minutiae of a sedate exposition scene as skilfully as the booms and bangs of an action set piece. 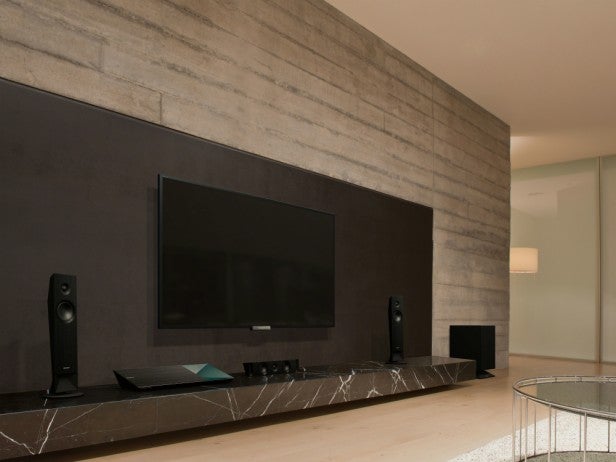 This sonic versatility comes in particularly handy when watching Iron Man 3 on Blu-ray. The opening party scene in Switzerland boasts a wealth of background detail, as crowd chatter and music shimmers from every speaker, while Downey Jr’s improv shtick comes through loud and clear over the top.

Cut to the next scene as Stark tries out the new suit in his lab and the Sony flexes its muscles brilliantly. As each suit piece clamps onto his body, the clang of metal is accompanied by a thick bassy thump, while the Bombay Dub Orchestra Remix of Joe Williams’ Jingle Bells pumps away enthusiastically in the background. As a listening experience it’s exciting but easy on the ears.

That continues when you skip forward to the scene when Stark’s home is reduced to rubble. The Sony’s soundstage is enormous, even without the benefit of up-firing drivers or height processing – explosions have remarkable heft and there’s a loud forceful rumble as the building falls down the cliff face into the sea. All around, the crunch of falling debris and tinkling glass is crisp and clear.

We’re also impressed by the way it keeps its composure at loud volumes and by the subwoofer’s performance, which keeps overhang and boominess to a minimum and lends a rich, full bodied tone to Downey Jr’s narration. These qualities also help deliver a superb music performance with everything from SACDs right the way down to 256k MP3 files.

The BDV-N7100W backs up its stunning sound with first-rate picture quality in both 2D and 3D. Iron Man 3’s bright, comic-book cinematography looks dazzling, with shedloads of detail and bold colours, while dark scenes boast solid shadow detail and minimal noise. 3D discs up the ante further, bringing a gorgeous sense of depth to the image while maintaining those eye-popping levels of detail and colour.

Another aspect of the Sony’s performance that shouldn’t be ignored is its overall operating speed. The Quick Start mode boots up the system in seconds and even the trickiest Blu-ray discs load up in around 30 seconds.

If you have neither the funds nor the patience to go down the separates route, then Sony’s one-box system is the next best thing. Not only does it deliver a thrilling, sophisticated movie sound quality, but it’s also packed with features and is one of the best-looking all-in-one systems on the market.

And while its £650 price tag might sound expensive, you get a lot for the money and in our book it outperforms similarly-priced flagship systems from LG, Panasonic and Samsung – although some may deem its Korean competitors’ edgier sound to be a little more exciting.

Next, read our round-up of the best soundbars to buy.