It’s Sony’s latest range-topping all-in-one system, which includes 5.1-channel speakers and a 3D-ready Blu-ray receiver with 1000W of amplification. It’s the perfect route into home cinema for those daunted by the prospect of shopping for separates, as everything you need is crammed into a single box.

The Sony’s premium price tag means you’re getting a higher calibre of system, particularly where features are concerned – the BDV-N7100W is packed with nifty tricks like Bluetooth, on-demand internet content and 4K upscaling. Let’s hope it can follow suit in the performance stakes.

This is a system that really stands out from the crowd. Sony’s Sense of Quartz design concept is inspired by the multi-sided shapes of rock crystal, which explains the sharp angles and slopes on the stylish main unit.

The console’s forward-sloping top panel and moody black finish give it a funky, futuristic feel – a far cry from the boxy Blu-ray receivers we’re used to – but the real magic happens when you power it up. A white light spills out into a triangular section on the right hand side in between the LED display and touch-sensitive controls, while a motorised top panel slides sexily to the right to reveal the disc mechanism. It’s stunning. 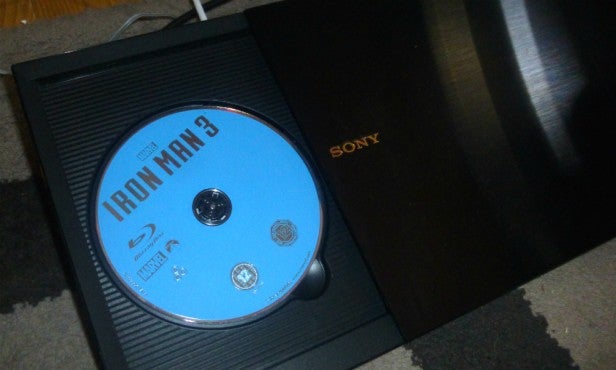 The front and rear speakers didn’t fall from the ugly tree either – the flat front panel has a shimmering brushed black finish, complemented nicely by the exposed drivers. The glossy back end has more alluring angles and slopes, while the whole thing stands on a circular base with a clever cable tidy system. They’re a tad plasticky but as well made as you could expect for the money.

Also worth mentioning is their shallow depth, made possible by the use of Magnetic Fluid speaker technology. With regular speaker drivers, the diaphragm is driven by a coil with a damper at the rear for suspension. Sony’s drivers replace the damper with magnetic fluid (or ferrofluid) which not only allows the coil to move more freely but also makes the mechanism thinner and therefore easier to fit inside slim cabinets.

Anyone worried about cables snaking across the room will be pleased to hear that the Sony system comes with a wireless rear speaker kit. The receiver is a black box (not a particularly attractive or discreet one, to be honest) with terminals on the back for the surround speakers. You need to plug the supplied cards into the main unit and receiver.

Also in the package is a horizontal centre speaker and a passive subwoofer, both styled to match the other speakers. The sub is fairly large but clad in a pleasant black finish that won’t disgrace your living room if you can’t hide it away. The plinth on the bottom sports more of those crystal-like angles.

The main unit includes a generous range of sockets, including two HDMI inputs for playing external HD sources through the system and an HDMI output that supports 3D, ARC, 4K upscaling and BRAVIA Sync. You’ll also find optical digital and analogue stereo inputs, a minijack input for the supplied setup microphone, FM aerial input and an Ethernet port. The colour-coded speaker plugs make setup nice and simple. On the front, meanwhile, is a USB port for media playback from pen drives and external HDDs.