In an era when visibility is the key to everything in mobile, it’s not hard to understand why former king of the castle SEGA is so keen to make something of one of the of most recognisable IP on the planet. The problem with Sonic the Hedgehog, however, is that beyond his supreme 2D, speed injected exploits, he’s actually a rather limited beast. Other than dropping him into a pinball machine, it’s actually rather hard to make all too much of him outside of his natural environment.

And, yet, still SEGA tries. Though fans differ just when the spiky blue one start to speed downhill, it’s arguable to suggest that, beyond an attempt to take the series back to its routes with Sonic 4 in 2010, there hasn’t been a decent game for more than twenty years. As the tone of the opening to this review might suggest, Sonic Dash 2: Sonic Boom is most certainly not the game to reverse this trend.

Indeed, even a thirty second dabble with this Temple Run wannabe is enough to suggest someone needs to take the Sonic license away from SEGA for its own good, because like an alcoholic looking wistfully stumbling around outside an off license, it just can’t resist taking one more sip from the bottle, pumping out one more mediocre Sonic release in the hope that it changes the franchise’s fortunes. This time it’ll be okay. This time it’ll work out. 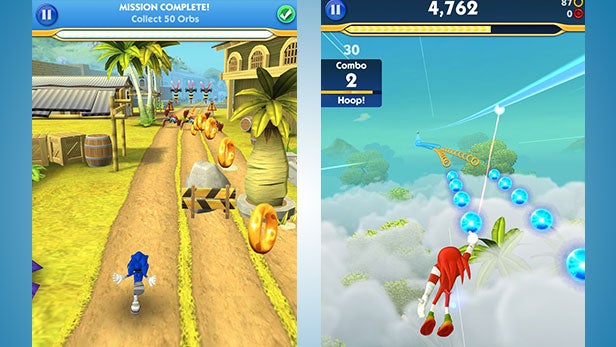 What makes Sonic Dash 2: Sonic Boom even more frustrating is that, as its name indicates, this isn’t even the first crack SEGA has had at the whip. Sonic Dash made its debut two years ago and, funnily enough, failed to set the world alight despite many millions of downloads, namely because the on-rails 3D endless runner model it was modelled on had already been part and parcel of the mobile world for many years. It’s hard to say why, beyond the bizarre penchant SEGA currently has for dressing the newly stretched Sonic and pals up in scarfs and other superfluous bargains from the Mobius branch of Accessorize, there’s any real reason for Sonic Dash 2 to exist, given what’s on offer here doesn’t stray all too far from what was offered up a couple of years ago.

Viewed from behind, the goal in Sonic Dash 2 is to survive for as long as possible by darting left or right, jumping or spin dashing to either avoid or destroy the enemies in your path. In your way are an assortment of enemies from Sonic’s past and standard hurdles such as rocks and tree trunks, and survival is a case of knowing which of your moves to deploy when. Swiping down to spin dash into enemy crabs, for instance, will work out well, but doing so when there’s a tree in your way will end the game prematurely.

That’s unless, of course, you use some of the in-game currency – either earned through play or paid for with cash – to carry on. Each time you do so, the amount required to carry on the next time you come a cropper, and so Sonic Dash 2: Sonic Boom has its monetisation in place. Why you’d want to carry on, however, is a matter of conjecture. 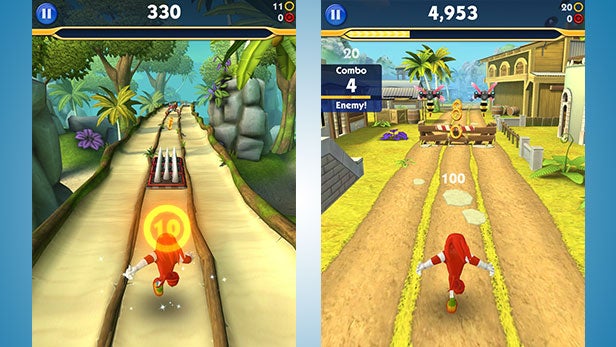 Though there’s nothing essentially wrong with Sonic Dash 2’s set up (save points appearing as paths to the left or right mid play so you can give up while the going is still good), there’s also nothing especially new to it, nor any feeling that the IP developer Hardlight Studios has wrapped around the game is in any way reflected in the action beyond superficial means. Are trees and rocks particularly grounded in the Sonic universe, for instance? And why did Hardlight decided to drop Sonic and his friends into a village – complete with what appear to be picnic tables running along the side – for the second stage?

It all means that Sonic Dash 2: Sonic Boom appears to have no direct audience, no groundswell of fans that’ll prop it up after its promoted run on the App Store or Google Play comes to an end. For casual Sonic fans who have no real affection for the series, it’s just an endless runner that borrows heavily from Temple Run and its clones without offering anything new of note. For dedicated Sonic aficionados, it’s a game that pays no heed to the series’ roots or offers any compelling vision of where the IP can go next.

In fact, it simply serves as further evidence that SEGA has no meaningful plan for Sonic other than milking him for all he’s worth – which isn’t all too much these days – before dropping his strained, drained and ultimately lifeless carcass in the rubbish bin.

Verdict
Inoffensive to casuals but disrespectful for committed fans, Sonic Dash 2: Sonic Boom makes no attempt to bring anything new to the endless runner, nor does it add to the now battered and bruised Sonic IP, making you wonder why – beyond earning a bit of extra cash – SEGA decided to flog its blue, spiky and now largely dead horse one more time.