Attractive, with good results – but it isn't always easy to fit for four slices of bread into the TSF02 4-slice 2-Slot toaster.

Compared with the newer four-slot, four-slice TSF03 toaster, the TSF02 features only one set of controls; there are only two slots, after all. However, these slots are capacious, allowing you to toast very long bread, such as large slices of sourdough or halved baguettes.

The results here are great, and a specific bagel toasting program proves a great advantage. However, the slots tend to be a little snug for fitting in two slices of bread sideways, while placing them vertically means a section of bread will often remain sticking out. 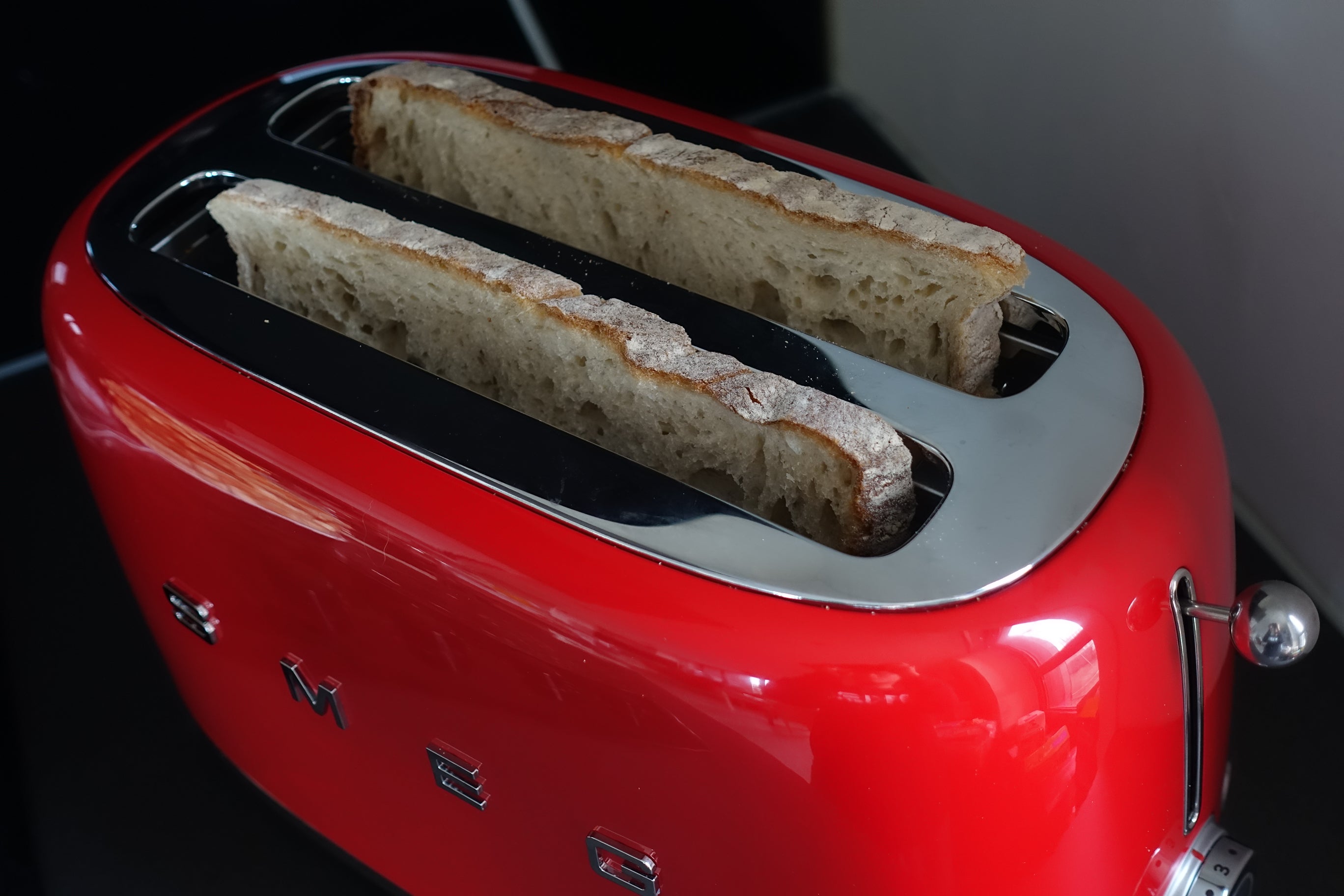 The TSF02 toaster’s design is essentially what would have been considered futuristic in the 1950s. But that isn’t a bad thing – although rocking a Space Age retro vibe, the TSF02 also manages to look like a glossy appliance fit for any contemporary kitchen, whether it’s minimalist or shabby chic.

This is further aided by the breadth of colour options available that include cream, white, black, red, pastel blue, chrome, pink and pastel green. The version I tested was red (TSF02RDUK), although I also managed to briefly get my paws on the chrome version (TSF02SSUK).

The thing to note about all of these finishes is that they’re super-shiny. While the “deep drawn sheet steel” of the toaster’s body doesn’t attract many fingerprints from dry hands, grease smudges will definitely leave their mark. However, it’s easy enough to polish these off with a cloth.

The shininess also means high levels of reflectiveness. While it’s less noticeable in the red version, the chrome one reached mirror levels. (Handy, if you want to shave or apply mascara while waiting for your toast to pop, I suppose…)

On both sides of the toaster sits a large Smeg logo. All the accents are metallic, too, excluding the plastic parts of buttons that light up. 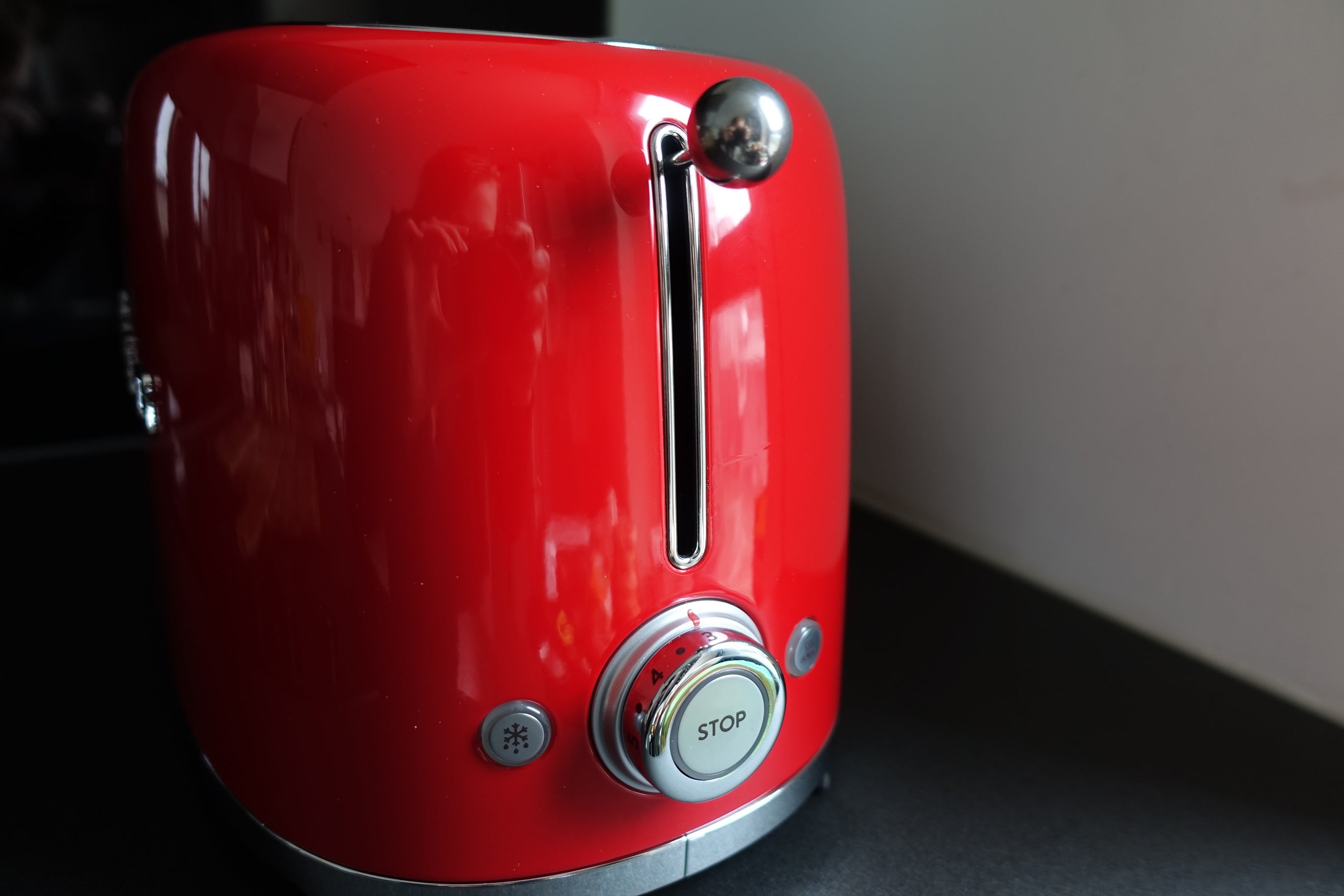 It’s a solidly built, sturdy toaster, unlikely to tip over in any scenario. While pushing down the lever feels a little stiff, it’s a great way to ensure this doesn’t happen accidentally.

Beneath the lever sits the browning level dial, featuring the reheat setting as well as numbers from 1 to 6. Each of those levels is divided into two increments, allowing you to settle at 2.5, for instance. A subtle ticking sound accompanies the turning of the dial.

Other toasters I’ve tested tend to include a separate reheat button, which needs to be pressed right after pushing down the toasting lever. However, this can create confusion in terms of which browning level you should choose. Having the reheat setting on the dial makes sense, taking the guesswork out of the equation.

The cancel button can be found at the centre of the dial, signified by the word “STOP”. This will light up whenever the toaster is in use. 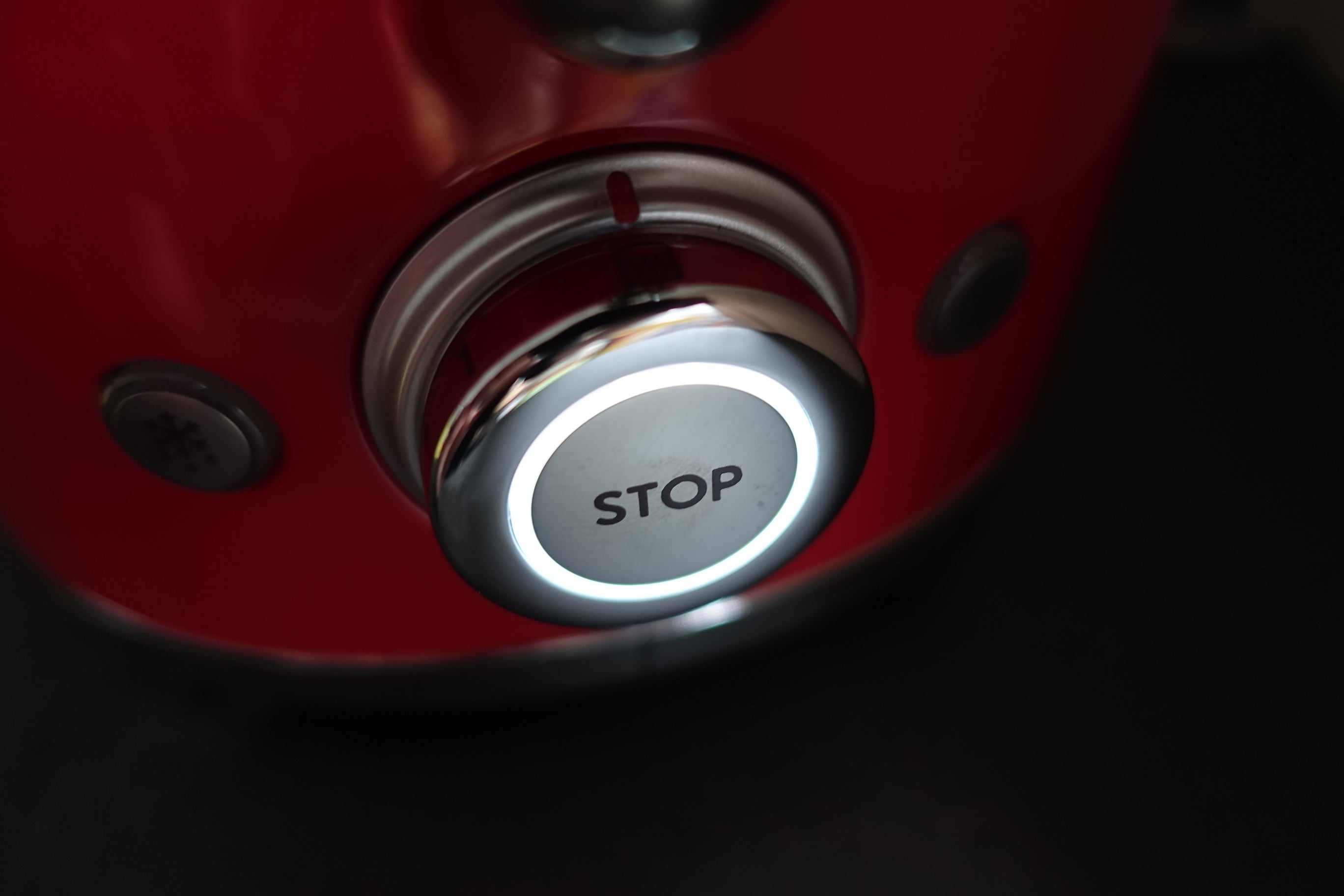 On the right side of the dial is the bagel function button, and on the left is the defrost button. Both light up when pressed.

The bagel function is a rare option among toaster manufacturers – although not unique to Smeg. In addition to bagels, Smeg also suggests you can use it for (halved) flatbreads, muffins and baguettes.

The TSF02’s slots are about 27cm long and 4.2cm wide. However, the instruction manual advises that you shouldn’t toast any bread thicker than 3cm.

At about 22.5cm, this toaster is quite tall. It’s about 20.5cm deep and 40cm wide. The cable is a generous 88cm in length, giving you about 54cm from the back. There are hooks at the bottom of the toaster for cord storage.

The easily removable crumb tray is at the rear of the toaster and has a push-to-open mechanism. The TSF02 also features small, non-slip rubber feet, with a second set of four included as a back-up with the instruction manual.

Smeg has also designed a sandwich rack and a bun warmer for the TSF02; both are sold separately. 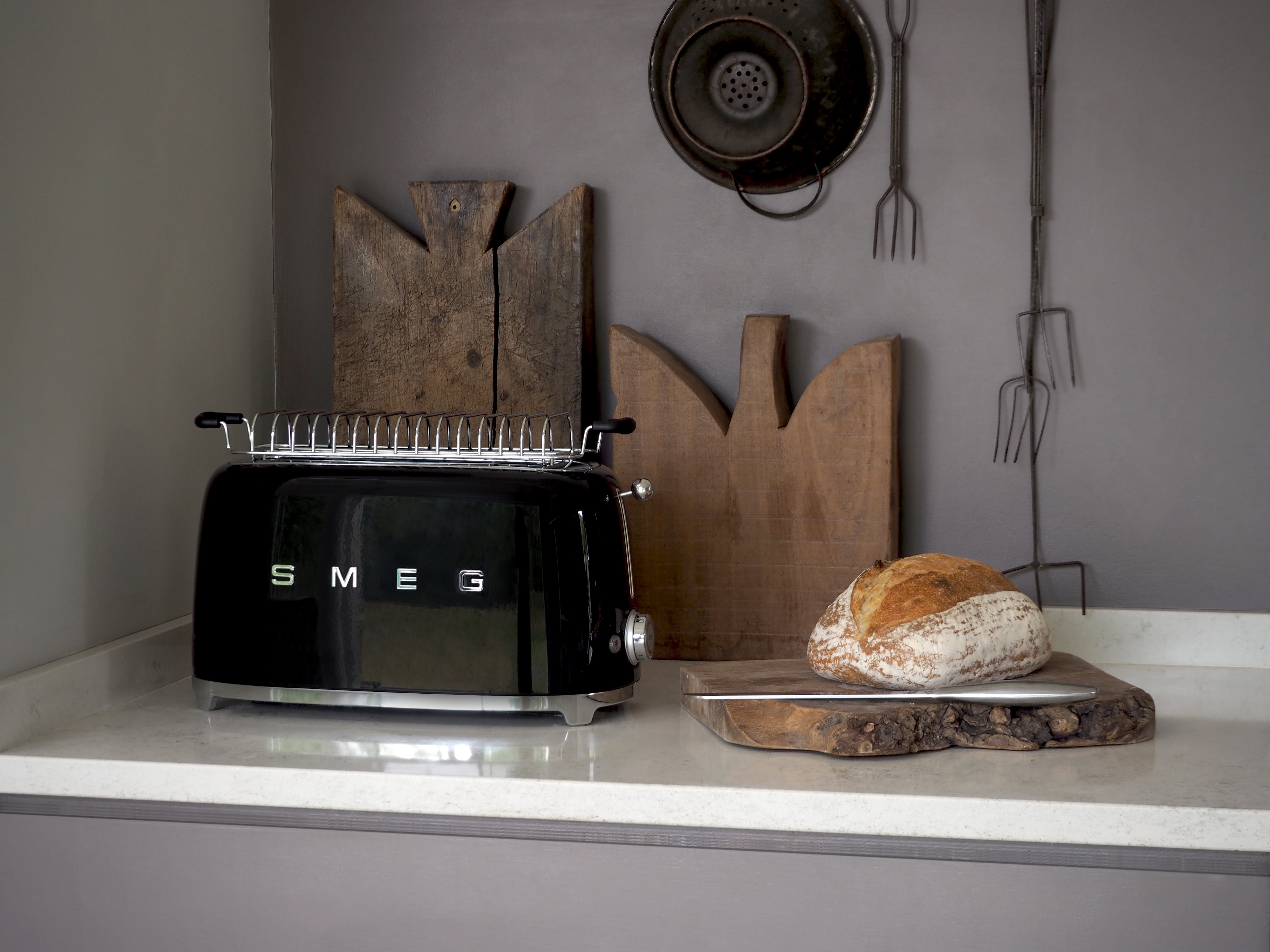 I tried out a variety of browning levels and functions with the TSF02. Not only does it have the bonus of a bagel function, the slots here are long, meaning you can toast whole slices of sourdough.

I found the most suitable browning levels for each type of bread tended to vary, depending on whether I was toasting one or two slices per slot, and on where I placed the single slice of bread (in the very centre, or towards one edge of the slot).

I started with four slices of standard supermarket white bread – two in each slot – to figure out the best placement. It soon became apparent that slices of a large (circa 800g) loaf are just a little too long to be positioned in the toaster horizontally.

Yet, due to the width of the slot, I still managed to squeeze two in, by letting them slightly overlap (by about 2.5cm). 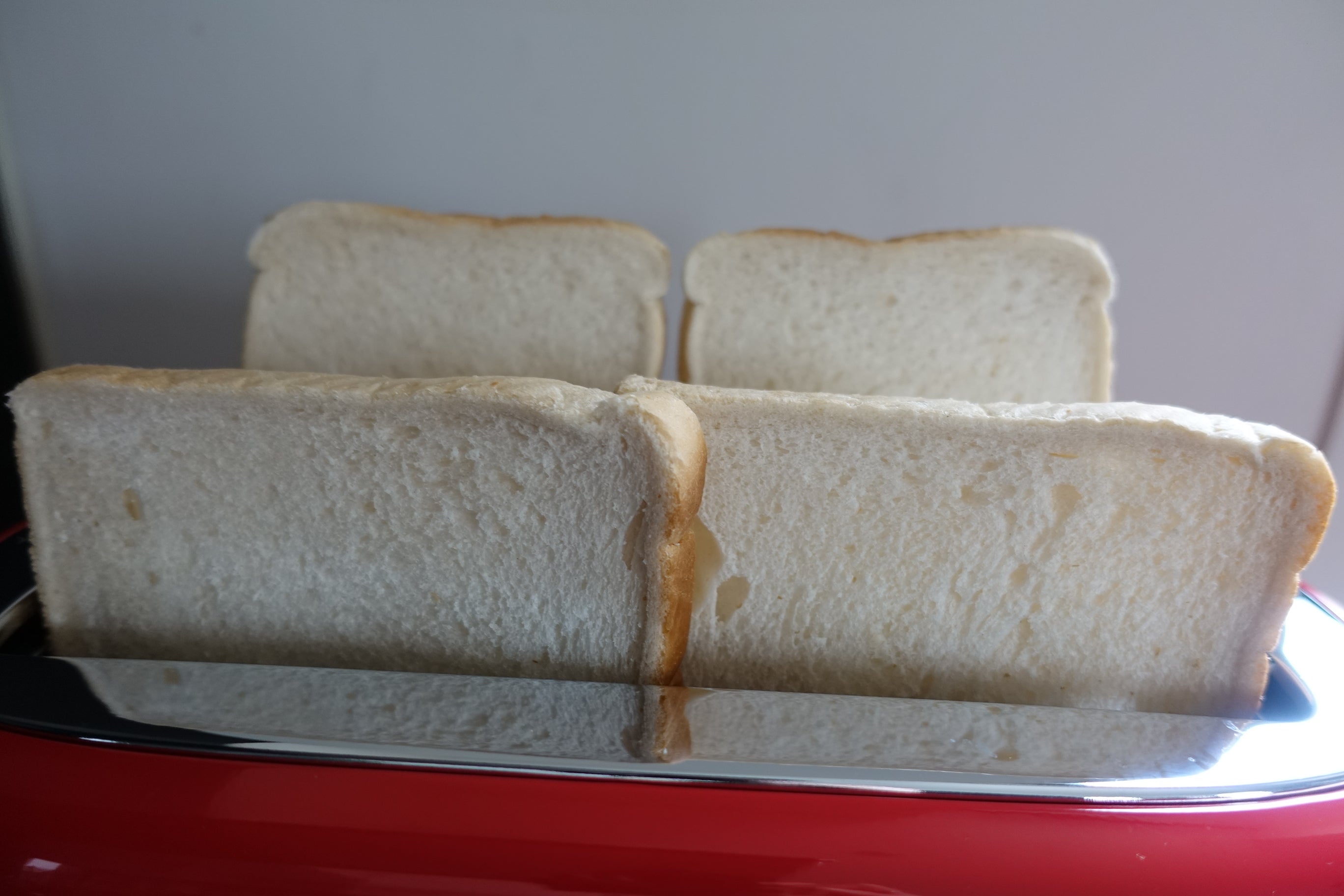 On the other side, I placed two slices vertically, which stuck out of the toaster a little once the lever was down. At setting 3, the toasting took around 2mins 45secs.

The slices placed vertically had nearly 3.5cm of pale bread on top. The horizontal slices looked brown and even on one side, but had a 3.5cm pale area where the bread overlapped.

So, be mindful of bread size when using the TSF02. You should either opt for smaller loaves, or simply toast two slices at a time for the most even results.

The reheat function can prove somewhat useful here; the manual itself recommends using it to brown up your underdone toast. In reality, it added faint colour and a bit of crispness to the undercooked parts of bread. 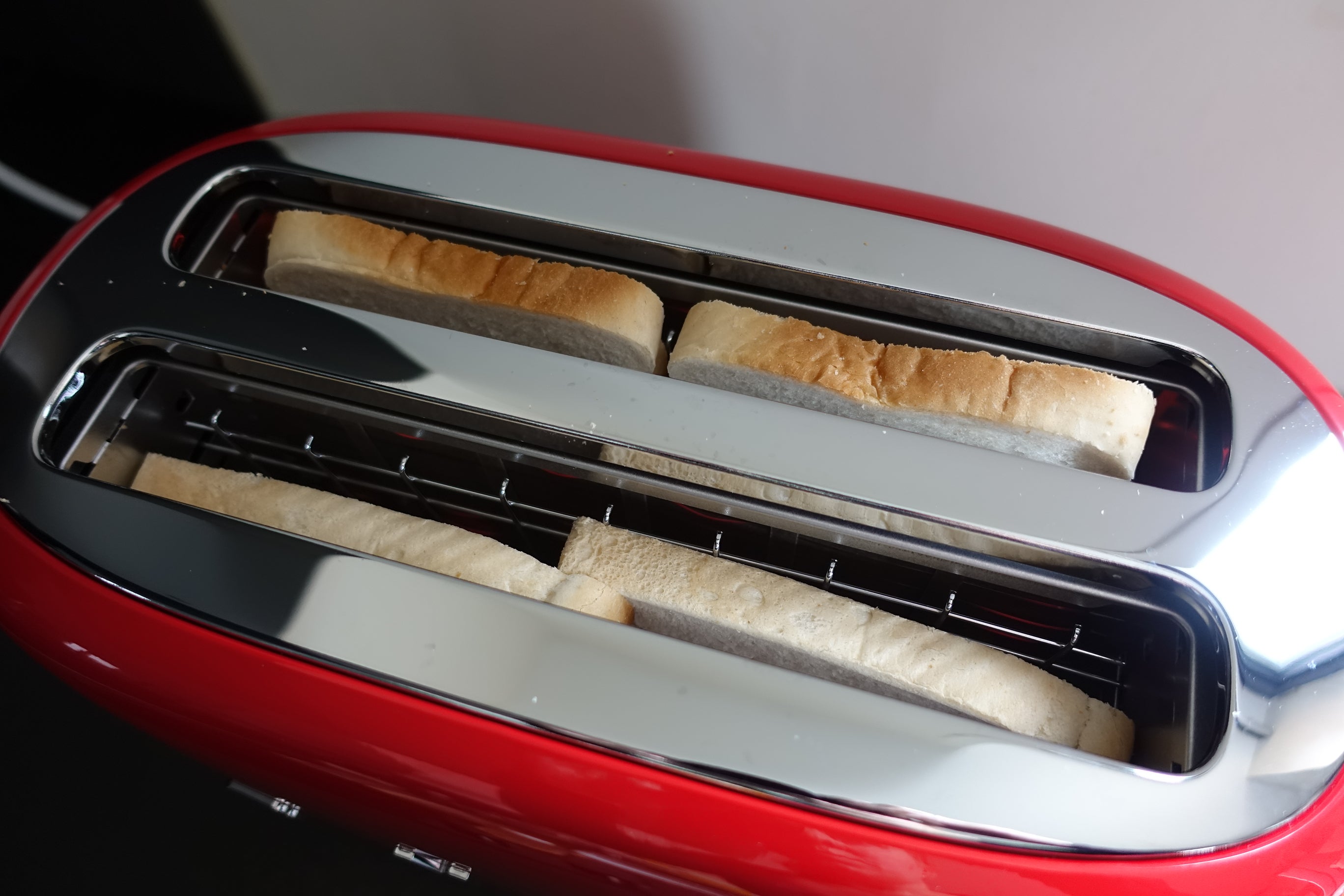 Toaster temperature affects toasting time, so for greater accuracy in my tests, I always started with a cooled-down toaster.

While setting 3 worked for four slices of standard white bread, it proved too much for two slices, burning the bread. Setting 2.5, meanwhile, yielded great results in the same time (2mins 45secs).

Place your bread in the middle of the slot. The very ends of the slot produced more uneven results that tended to be a little overdone at one edge.

For four slices of wholewheat bread, the best settings were surprisingly similar (it’s often recommended to toast wholewheat at a lower setting than white bread).

As I was toasting a circa 400g loaf, all the slices fit into the toaster sideways. At setting 3 it took around 2mins 40secs to produce nicely browned bread.

Then I turned my attention to frozen bread. Two slices of frozen bread on setting 3, with the defrost function activated, took about 2mins 55secs. The resulting toast was pretty evenly coloured, with a nice and crunchy outside and a soft – but not soggy – inside.

Next up were crumpets. At setting 4.5, they took just over four minutes to toast and turned out gorgeously crispy on the outside, while remaining chewy on the inside.

Due to the toaster’s high lift, it’s relatively easy to place the crumpets in the toaster. Removing them was a tad trickier as they became slightly wedged. However, I managed to free them with the help of a wooden chopstick and by slightly lifting the lever. Once this was sorted, the crumpets were easy to extract without the need for tongs. 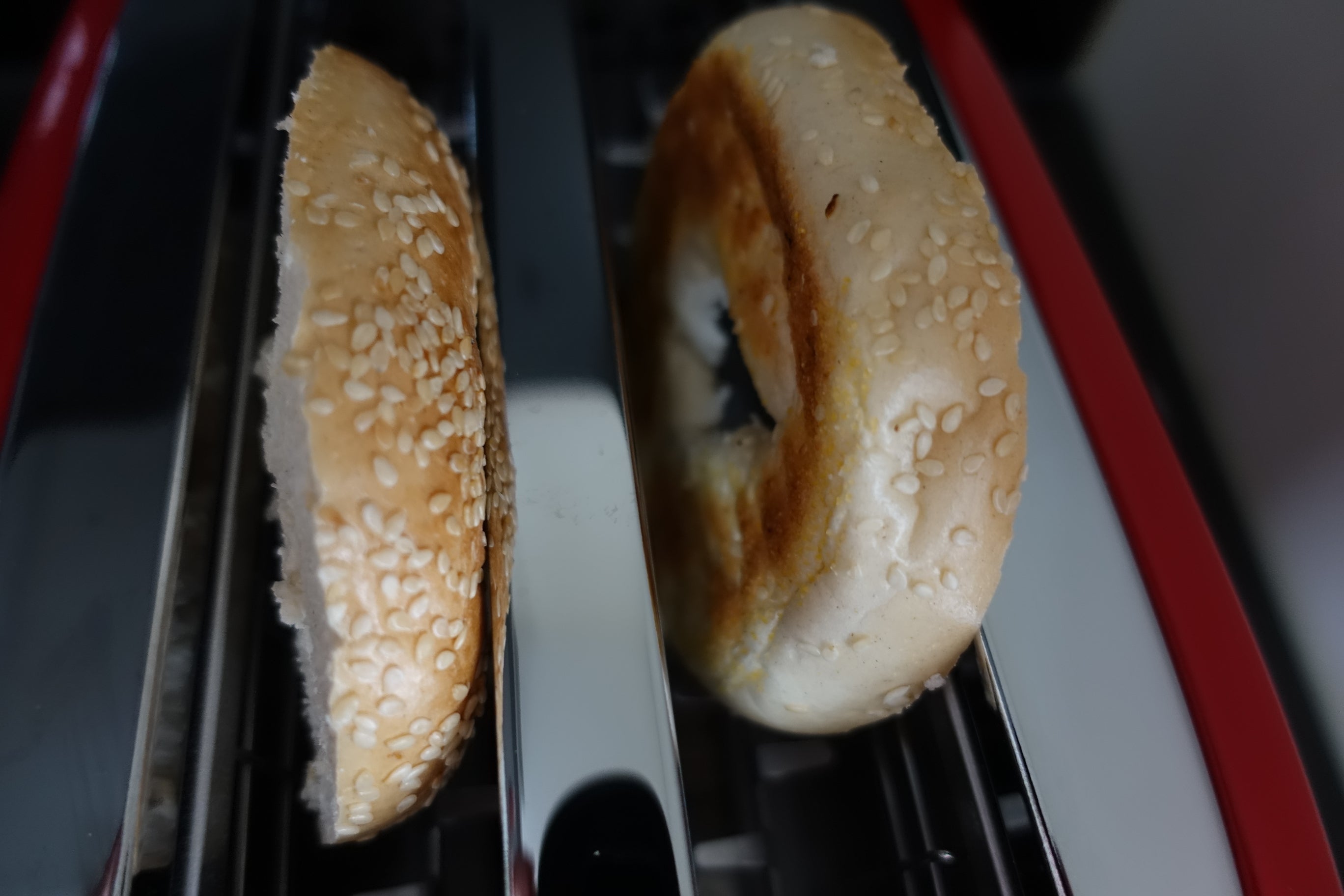 Finally, it was time for bagels. The TSF02’s bagel function promises to toast only one side of the bagel and gently heat the other, provided you place the bagel halves so that the inside halves of the bagel are facing the outside walls of the toaster.

To make things particularly apparent, I chose bagels with sesame seeds – these are nice when slightly heated, but can burn quite easily.

At setting 3.5, with the bagel function activated, the toasting took just 3mins 25secs. The resulting bagel was chewy on the outside, without any extensive browning of the sesame seeds, and nice and crispy on the inside.

While the pop-up mechanism of the TSF02 isn’t too strong for multiple slices, be mindful when toasting a single slice; the toaster may fling it onto your countertop – or worse, onto the floor. 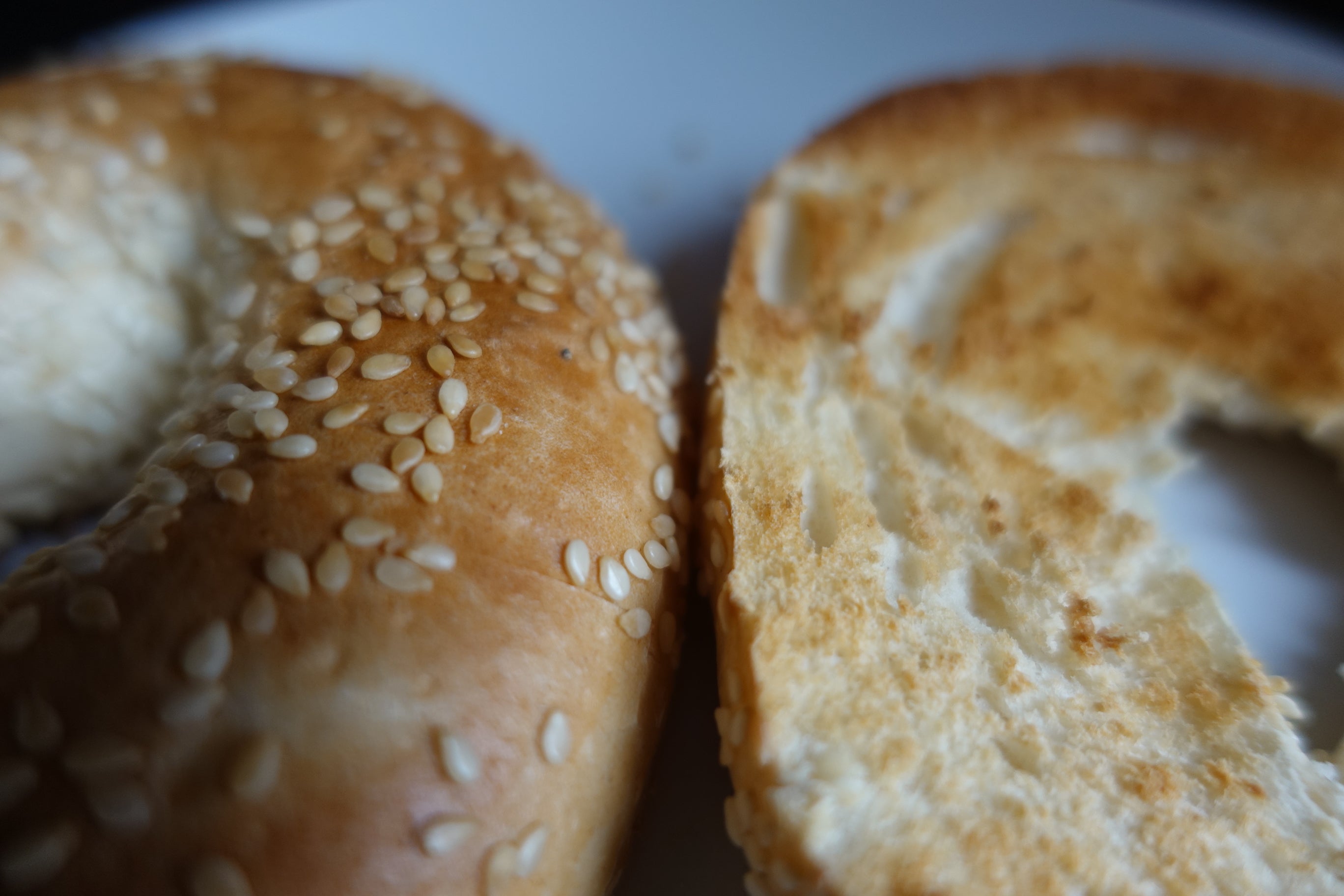 The Smeg TSF02 is a gorgeous toaster with slots long enough for large sourdough slices and half baguettes, and that bagel function is useful. If you’re happy to have a four-slice toaster with a single set of controls, the TSF02 offers great results.

However, if you like the idea of making two different types of toast at the same time then the Morphy Richards Evoke 4-Slice toaster is a more suitable – and affordable – contender.