What is the Morphy Richards Evoke 4-Slice toaster?

Morphy Richards’ Evoke 4-Slice Toaster is part of the company’s newest range of toasters, available in a variety of finishes and a two-slice model too. Although similar to the Morphy Richards Accents 4-Slice toaster in design and function, subtle differences make the Evoke a more stable machine. 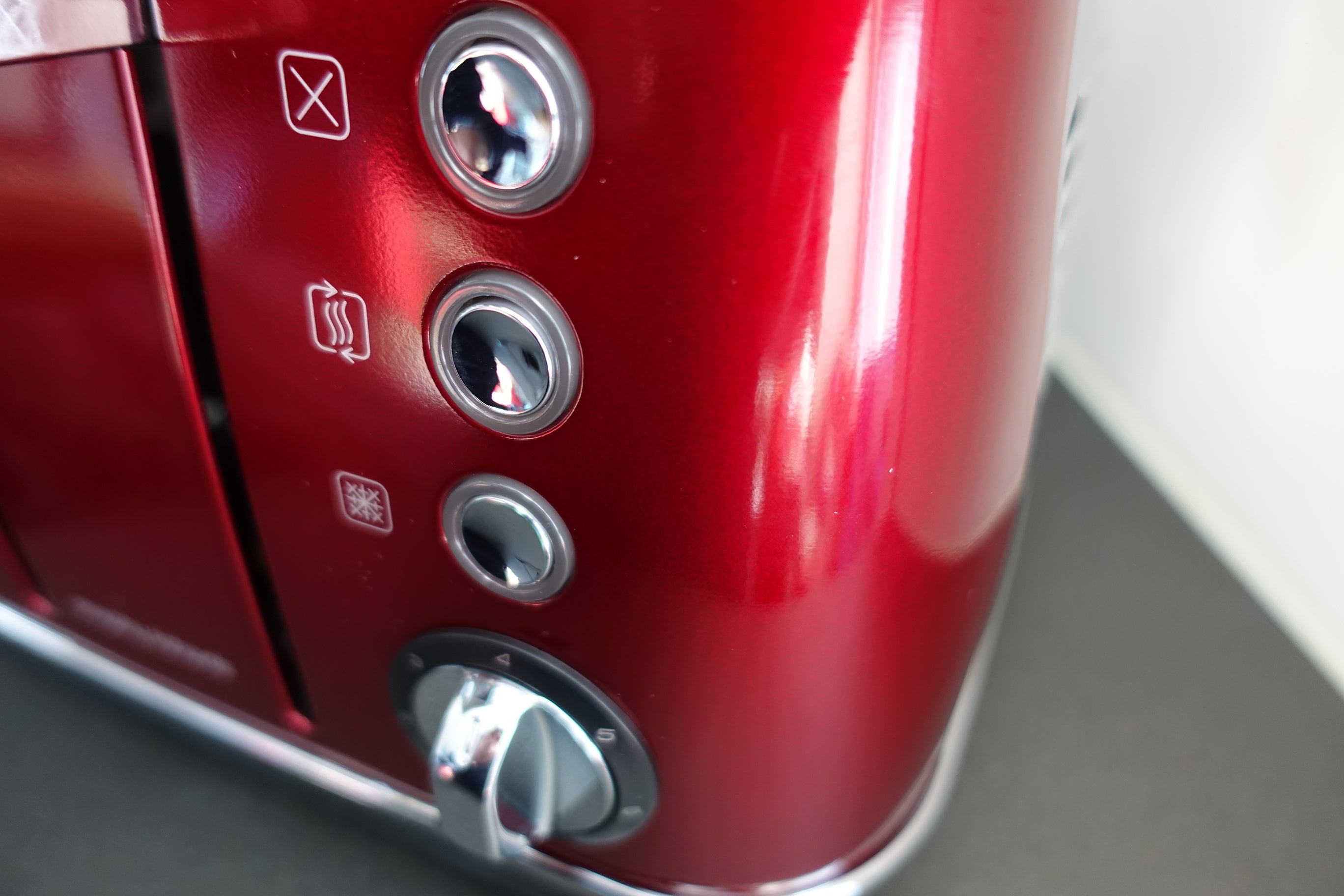 The design of the Morphy Richards Evoke 4-Slice toaster feels modern while maintaining a slightly retro vibe. It has a curved body that tapers slightly towards the top, and a bottom that narrows into a base with four small feet.

Thanks to these feet, the Evoke is sturdier than the Accents toaster, and is less likely to tip forwards when you push down the two levers at the same time (unless you’re deliberately bashing it).

The Evoke 4-Slice that I tested was red. However, it also comes in white, cream or black. In addition, there are three models belonging to the Evoke Rose Gold Collection – black, white or brushed metal with rose gold features. Three further special edition toasters are available in steel blue, bronze and platinum colours – but these come with a much heftier price (RRP £99).

The body of the Evoke toaster I tested was made of pleasant, shiny red metal, with silver metal sides and a matte-black plastic base. The buttons, levers and dials were made of metallic-coated plastic, but are of a high enough quality to appear genuinely metallic at a glance. 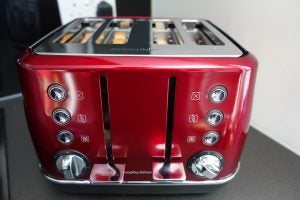 The toaster feels sufficiently high-end to fit any modern kitchen and complements the grey and black colour scheme of my kitchen – although, admittedly, it may clash with more colourful kitchens.

My only annoyance was that the shiny silver-coloured sides attract fingerprints quite easily. But this may be an issue specific to the regular range, including the red, black, white and cream toasters. The special edition ranges appear to have different material and colour solutions on the sides.

As a four-slice toaster, the Evoke does take up a chunk of space, measuring approximately 29.5 x 27 x 22cm. It has a relatively short 75cm cable, which gives you about 56cm if normally placed on the tabletop with the cable trailing out of the back. If, for some reason, you happen to have cable left over, there are hooks for storage on the underside of the toaster.

The Evoke has two levers, with each operating two slots. The levers are easy enough to push down, although definitely not so easy that you would do it accidentally. 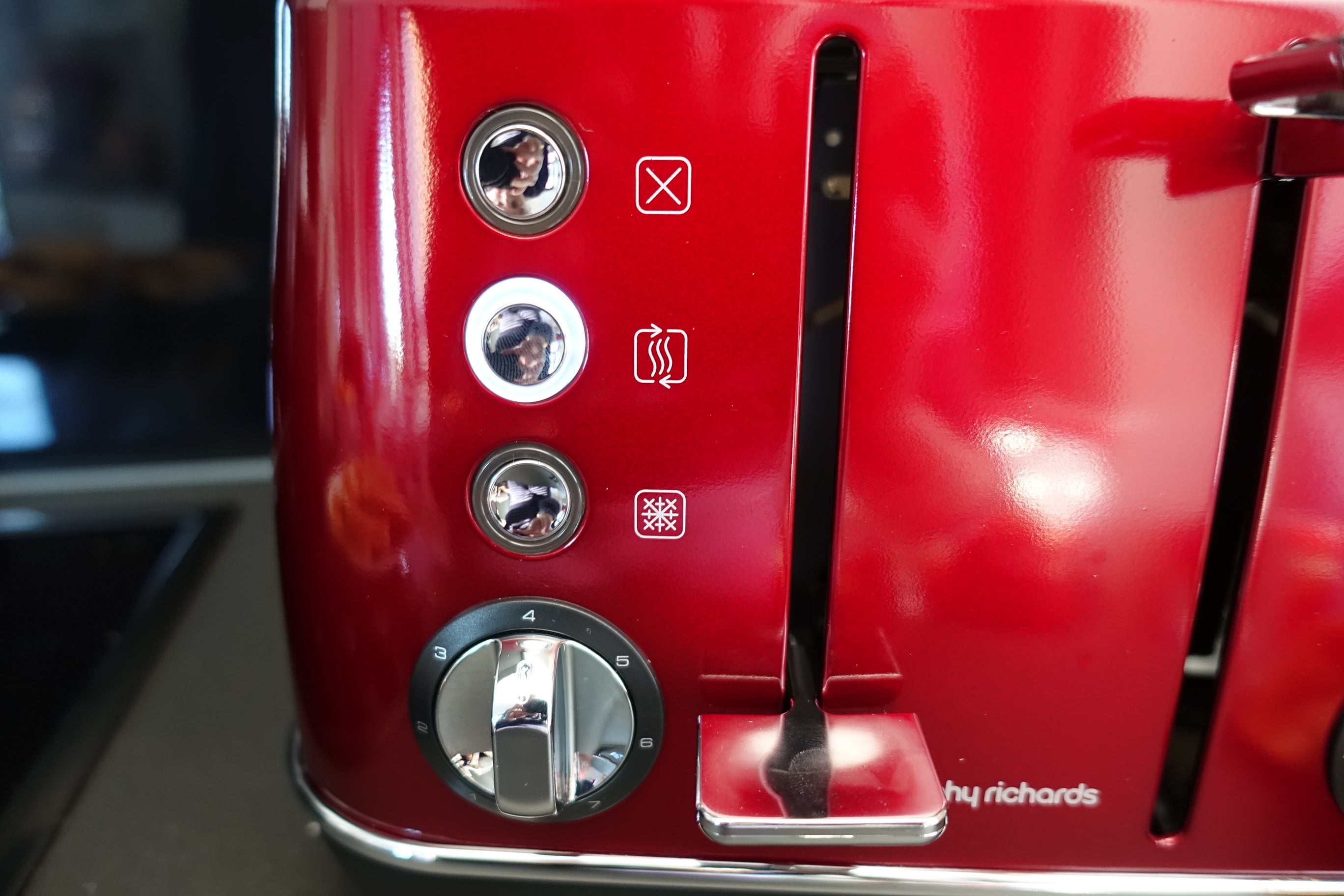 Sitting beside each lever you’ll find the cancel, reheat and defrost buttons in descending order. These have little rings around them that light up when pressed, to show which function is active. Below the buttons on both sides are browning level dials, numbered 1 to 7.

The dials also allow you to settle between those levels, with three different increments available between each number, signified by a subtle ticking sound when you turn the dial. This means you can fine-tune your toast setting to 3.5 or 3.75, if you like.

The slots are comfortably wide at 3.5cm and the mechanism inside will adjust to the width of the bread you’re toasting.

Near the base, at the back of the toaster, you’ll find the crumb trays. These can be removed and emptied easily. A short, straightforward instruction booklet with illustrations is included. 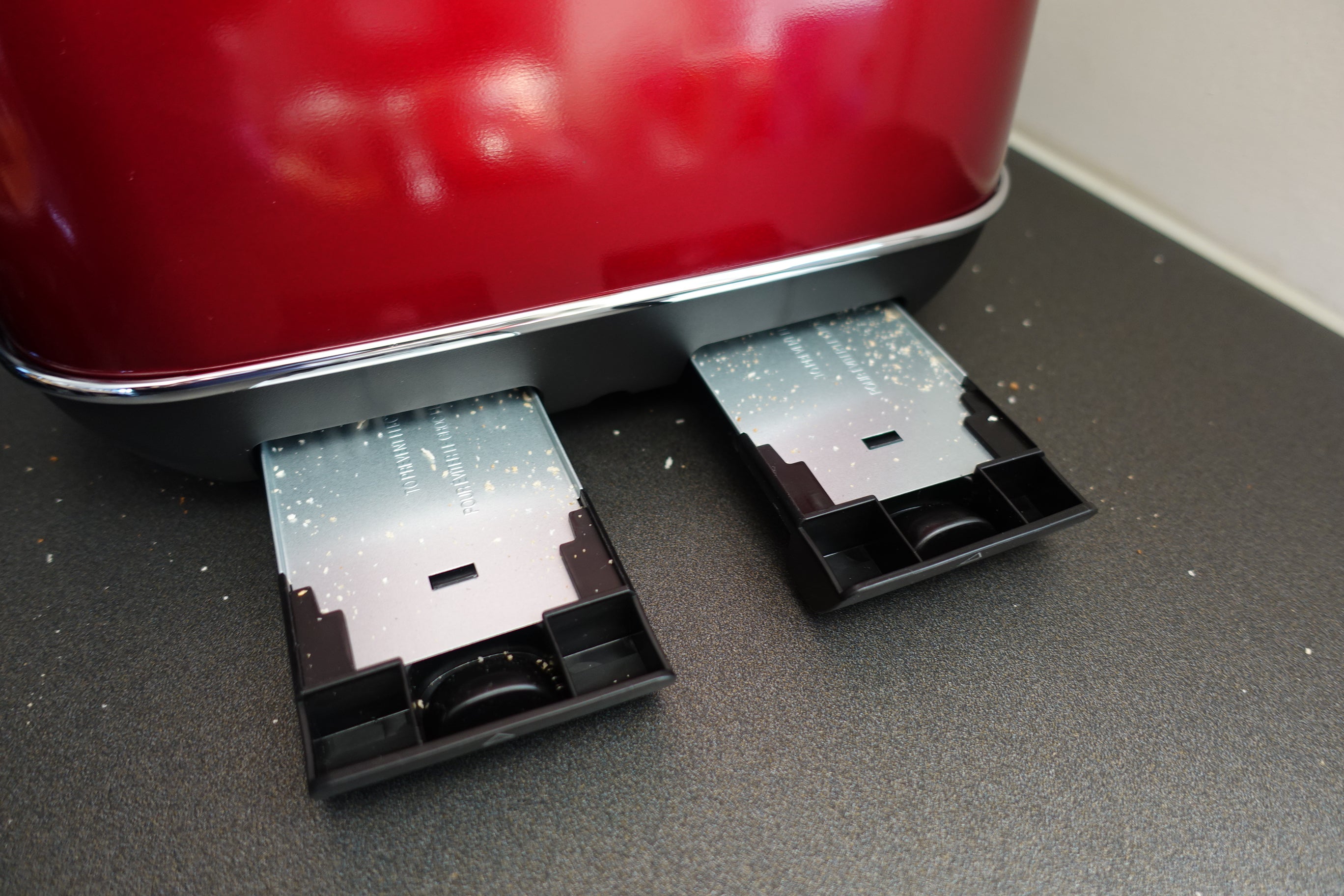 Morphy Richards Evoke 4-Slice toaster – What’s it like to use?

For my liking, the 4 was a little overdone and 3 perhaps a little pale, so I’d say 3.5 is the sweet spot – provided you toast at least two slices at a time and start with a cold toaster.

Note that, with any toaster, how brown your toast will end up depends on a variety of factors that include the freshness, thickness and ingredients of the bread; whether you’re toasting one or two slices at a time; or if you’ve recently used your toaster. If your toaster is already warm or you’re toasting just one slice at a time, your results will be darker. While I’d often recommend trying to toast your bread horizontally – you’re less likely to end up with an undercooked top – with the Evoke 4-Slice I actually believe you’re better off with a vertical placement. Compared with other toasters, very little of the bread slice sticks out of the top of the toaster.

The reheat function took 30 seconds and heated the toast without browning it too much. 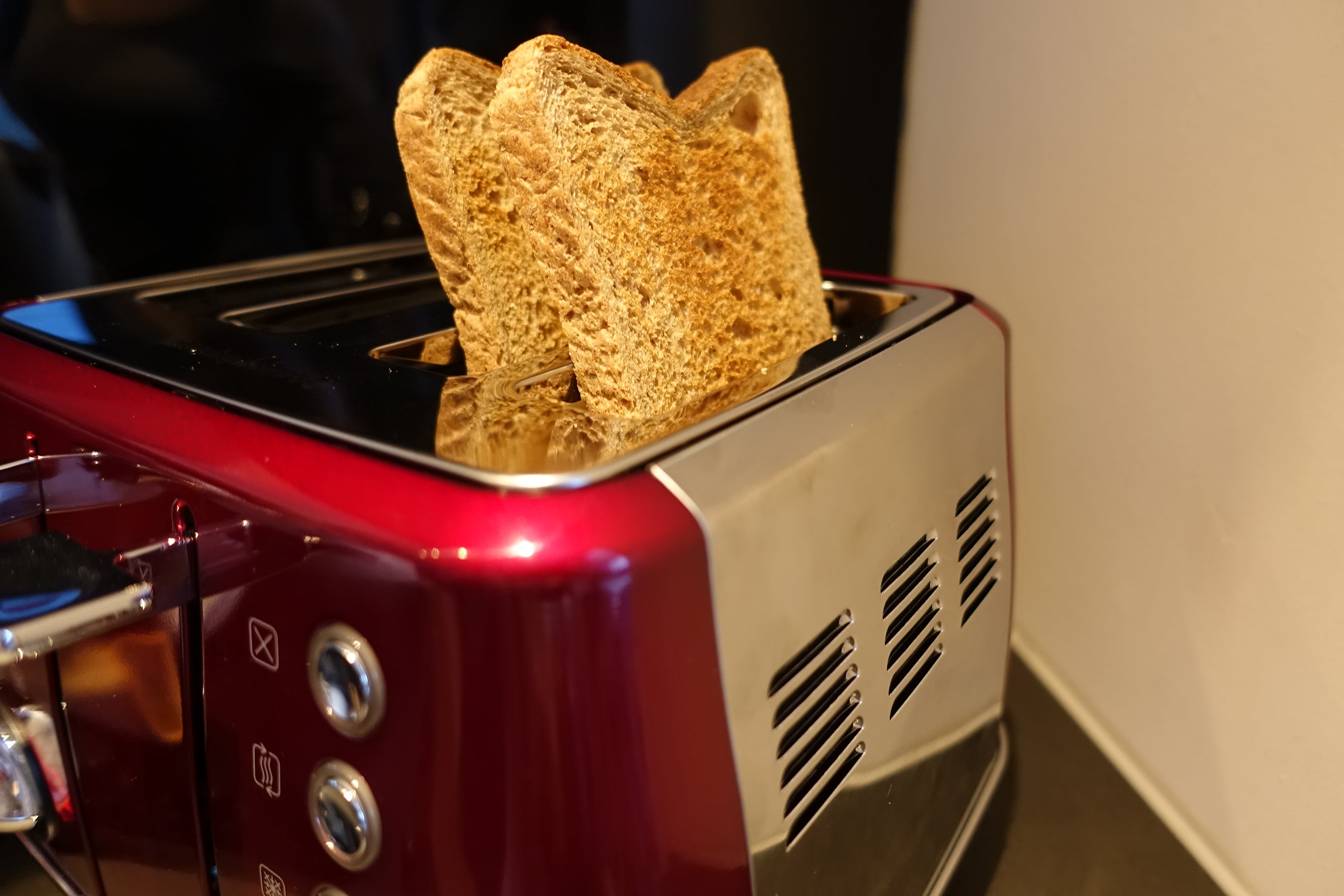 Setting 3 worked well for wholewheat bread, darkening the slices without burning them in around 2mins 40secs.

To test the defrost function, I toasted some “best of both” white/wholemeal bread straight from the freezer. At setting 3, it took roughly 2mins 50secs.

However, as mentioned, these times will vary according to what’s in the toaster and whether the toaster has been used recently. The browning levels are associated with reaching certain temperatures, so the toasting time is self-regulated by the toaster. 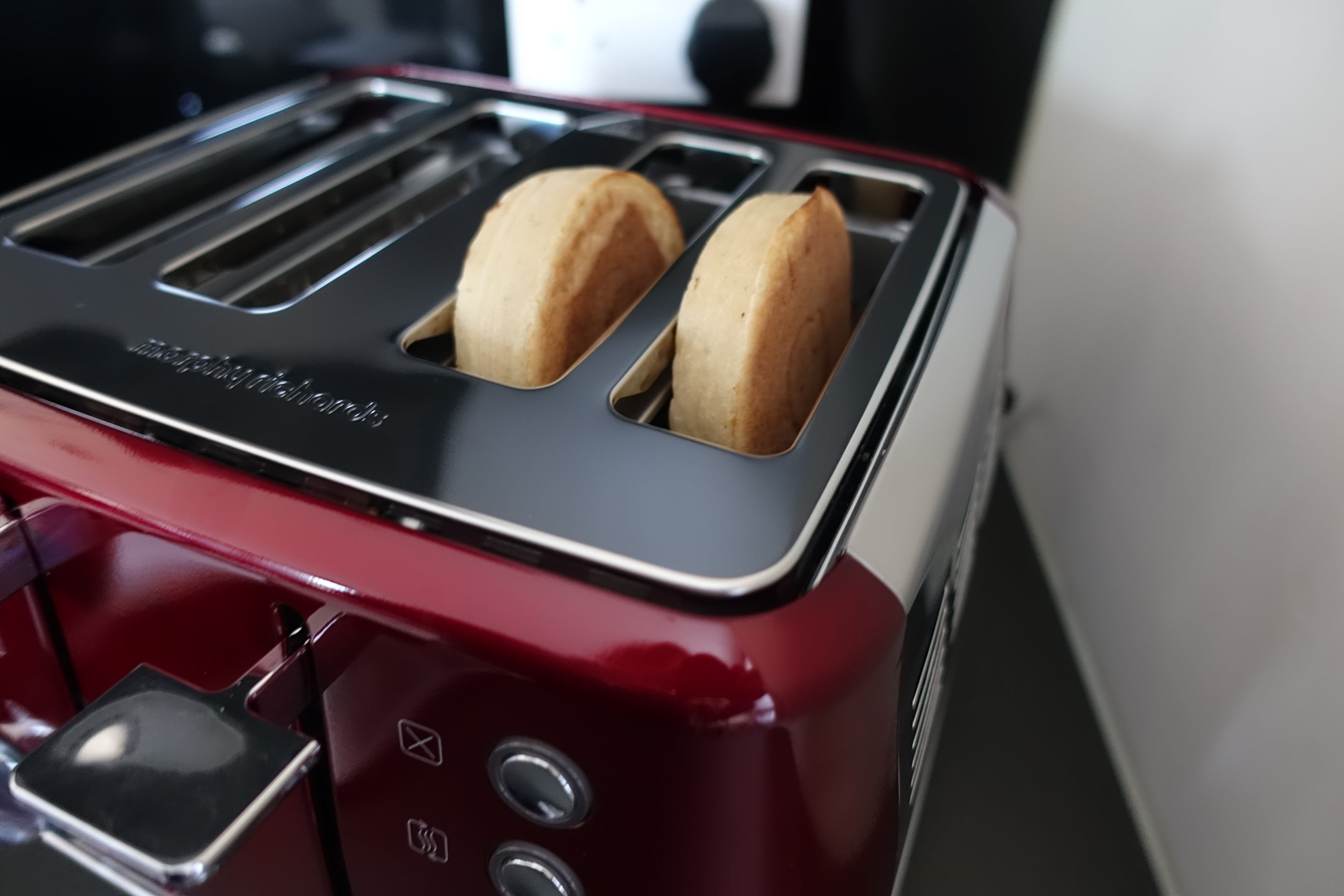 Next, I toasted a couple of crumpets. The results were nice and crispy on the outside on setting 5 in 3mins 45secs.

While the springs popping up the toast are definitely loud enough to notice, they’re not uncomfortably strong. During my tests with both slots filled, nothing was flung out of the toaster – not even the notoriously light Pop-Tarts.

However, when I tried toasting a single, thin slice of bread from the end of the loaf, the toaster threw it in the air so it landed loosely on top. So be mindful when toasting single pieces, particularly if they’re on the thin side. 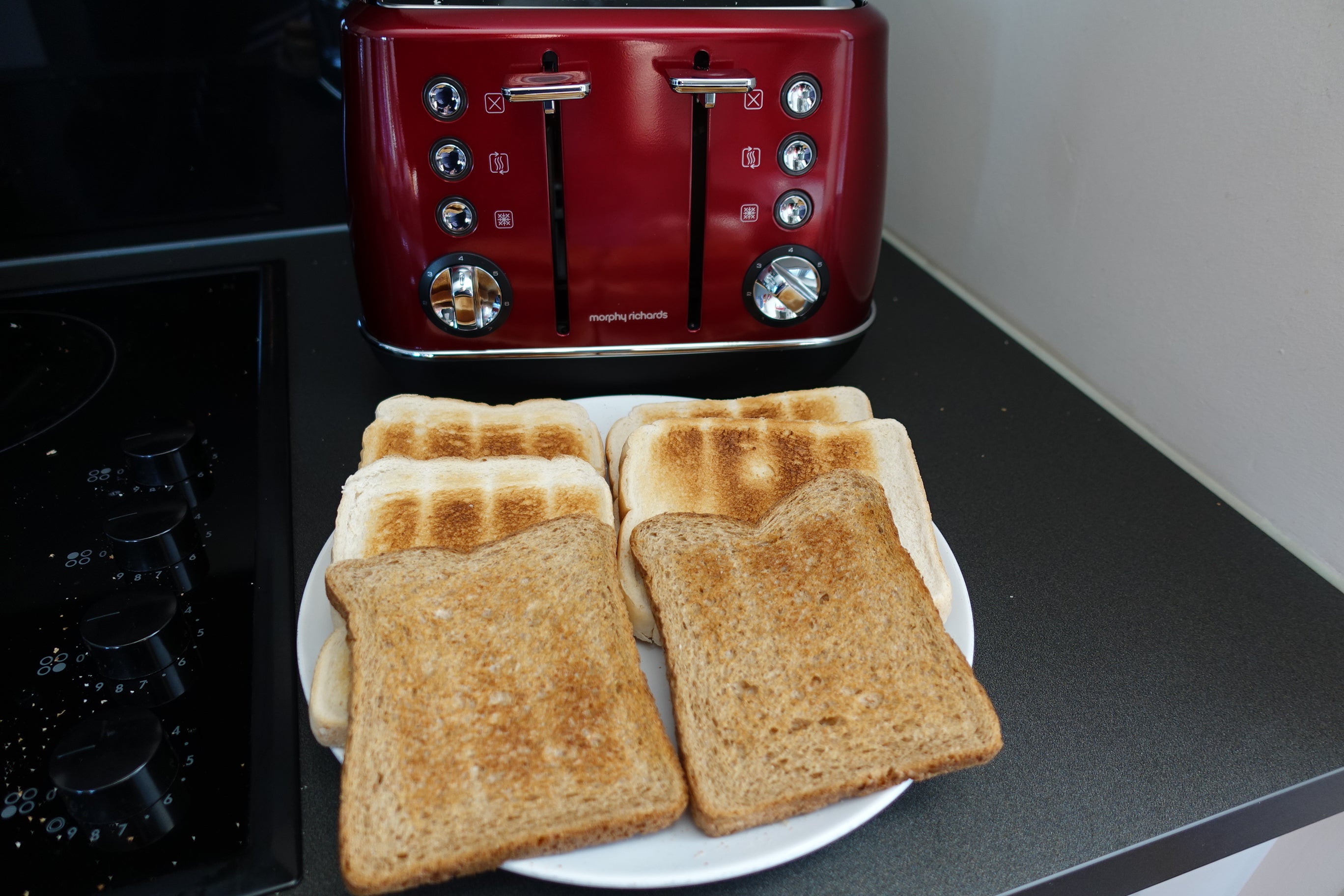 If you’re after a mid-range quality toaster, the Morphy Richards Evoke 4-Slice is a good candidate. It’s more solid on its feet than the Morphy Richards Accents 4-Slice toaster and comes in a similarly wide variety of finishes to suit your particular kitchen.

The Evoke may lack the extra thrills, such as a bagel function and the take-a-peek option of the Dualit 4-Slot Lite, or the keep-warm function and motorised lift of the KitchenAid Artisan 5KMT2204. But the Evoke more than makes up for it with its more affordable price and sleek design.