A need an inexpensive add-on, the Smart Clock for Echo Flex gives you an LCD screen that shows the current time and timers to it. The screen is large and easy to read, but it's a shame that it can't show additional information, such as the current temperature. It's also frustrating that you need to install a Skill to change the time format. The biggest issue for this product is that you need to have a power socket high enough up in order to see the clock: if you do, it's a great add-on; if you don't, then look elsewhere.

Although the Echo Flex was ostensibly an Alexa smart speaker in a plug, the USB expansion port promised that the system could do more, with a nightlight and motion sensor available at launch. Now, there’s the Smart Clock for Echo Flex, which adds a digital clock into the mix.

Simple to set and, the Smart Clock adds a few neat features, but whether or not it’s for you will largely depend on where your plug sockets are located.

Design – A neat clock that complements the Echo Flex

A ‘Made for Amazon’ product, the Smart Clock for Echo Flex is actually made by Third Reality, rather than Amazon. Not that you’d know it from looking at it: the clock is the same width as the Echo Flex, and has the same curved edges, although it’s a touch shorter (72 x 60 x 42mm).

There’s a USB port on top of the clock, which you plug straight into the USB port on the Echo Flex. That’s it! Once connected, the clock looks exactly as though it’s part of your smart speaker. 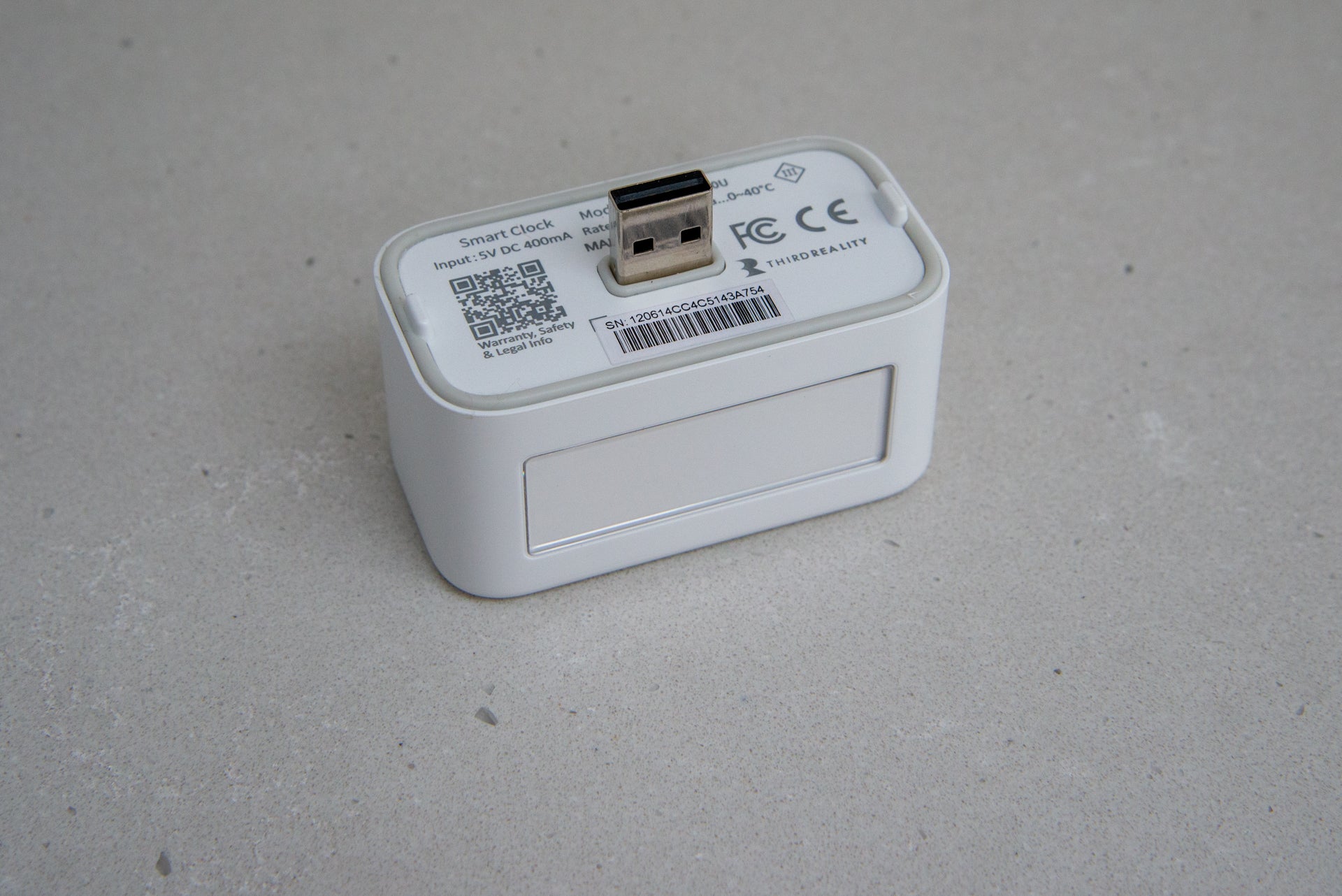 Features – Tells the time and shows timers but that’s it

Once connected, the Clock’s LCD display lights up and after a few seconds, the current time is displayed on the screen. By default, the Clock shows the time in the 24-hour clock, although you can download and install the Third Reality skill if you’d rather go for a 12-hour clock instead. Quite why this setting isn’t available in the main Alexa app is beyond me. The Smart Clock maintains its time via the Echo Flex’s internet connection, so you don’t have to adjust it. And, as the clock is powered via USB, it won’t run out of batteries, unlike the Amazon Echo Wall Clock.

Via Alexa, you can set the screen brightness to get the level that best suits you. My Smart Clock was, unhelpfully, automatically named as ‘First Device’ when added, but I renamed it to something more sensible.

The biggest measure of whether the Smart Clock is a success is whether you have sensibly-placed wall sockets. If yours are all near the skirting board, then the clock is completely unreadable; if you’ve got a higher-placed socket, such as in a kitchen, then it’s game on. 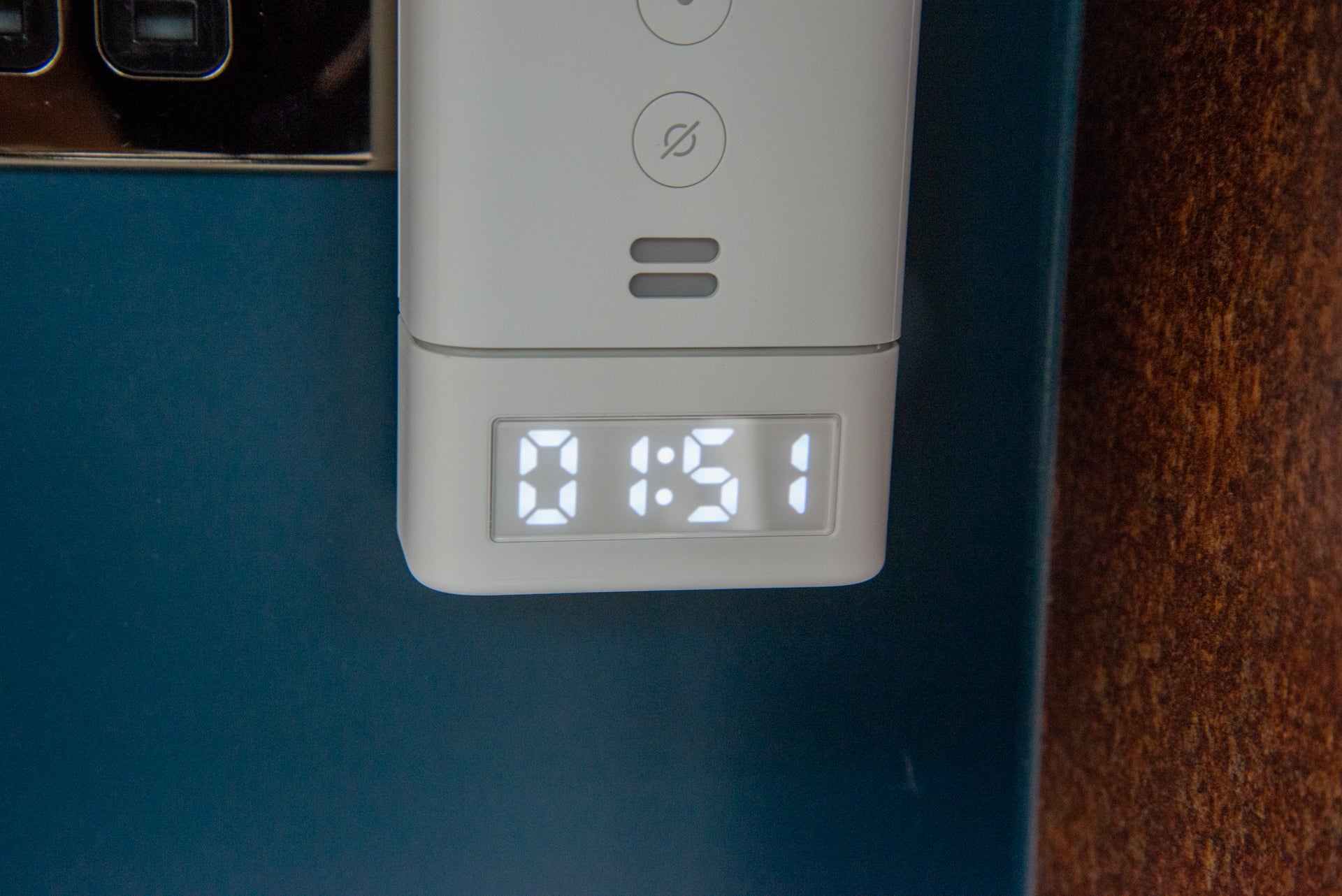 As well as displaying the time, the Smart Clock will show active timers. It will only display the one with the least amount of time left, but can handle up to 20. That really is it; unlike the Amazon Echo Dot with Clock, the display doesn’t show anything else, such as today’s forecast temperature, which seems like a bit of a missed opportunity.

Should you buy the Smart Clock for Echo Flex?

I have to say, that your main choice will likely come down to location. If you don’t have a suitable wall socket that makes it easy to see the Smart Clock’s screen, then the Echo Dot with Clock is a better product. If you want better sound quality, then also go Echo Dot.

If you largely want a device for voice replies and need a clock, then you can’t go wrong, and this is a cheap and functional upgrade.