What is the Smanos UFO?

No matter where you place a conventional security camera, the chances are that you’ll have a blind spot or two. Not so with the Smanos UFO, which has a fish-eye 180-degree lens, similar to that of the Samsung Gear 360.

This allows the Smanos to capture everything in front of the UFO, or – if you ceiling mount it – the entire room. A wide view of a room is useful, but a limited app and a lack of cloud storage detract heavily from its appeal.

It’s clear where this camera gets its name from: the circular camera looks every inch the flying saucer from 1950s science-fiction films. From a distance, the camera looks pretty decent, but up close build quality isn’t so good – the camera feels quite light and cheaply made. 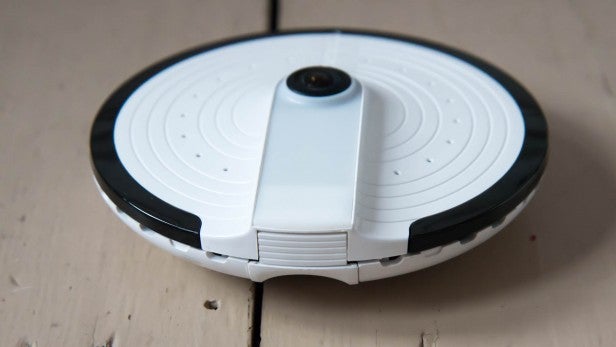 The Smanos ships with two mounts. First, there’s a desktop mount, where the camera sits in a vertical position. In this mode, the UFO can be placed more conventionally, taking in everything in front and around it.

Alternatively, there’s a ceiling mount. Once it’s screwed into place, with the camera mounted, it’s possible to cover an entire room. With both mounts, the UFO clips in and rotates securely into place. 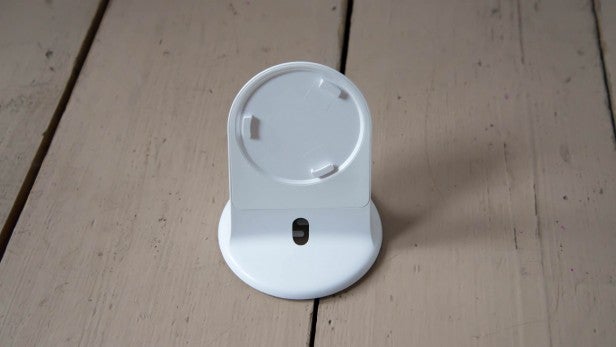 The UFO is powered by the provided micro-USB (this has a captive cable and the adaptor end), which is a generous 4.9m long. This makes positioning the camera simple. Beneath a small flap you’ll find the microSD card slot. 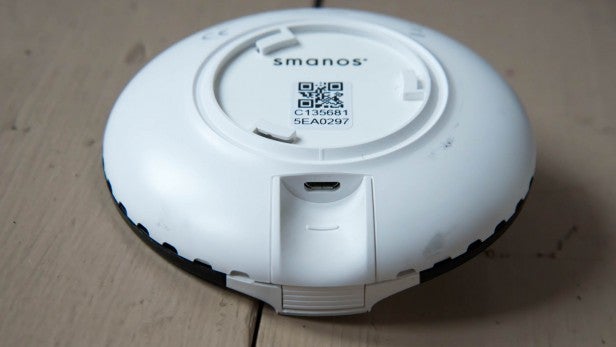 As with practically every bit of smart home kit, the Smanos UFO has to be configured through the mobile app (Android and iOS); there’s no web portal or desktop app.

First, you hit the connection button at the bottom of the camera, after which the phone has to connect to the camera’s network, in order to adjust settings and connect the UFO to your regular home Wi-Fi network (2.4GHz only).

It took me a while to get the camera running, since the Android version of the app failed to connect the first couple of times. Even when the camera was running, both the Android and iOS apps would occasionally report that the UFO was offline. Logging off and back on generally fixed the problem.

The Android app is a little strange: it has a Touch ID option that you can toggle on and off. This appears to be a hangover from the iOS version. When enabled, the Touch ID option turns on fingerprint support on your Android phone. Switching back to the Smanos app requires a fingerprint to use it. The same feature works on iOS, and is correctly called Touch ID this time. 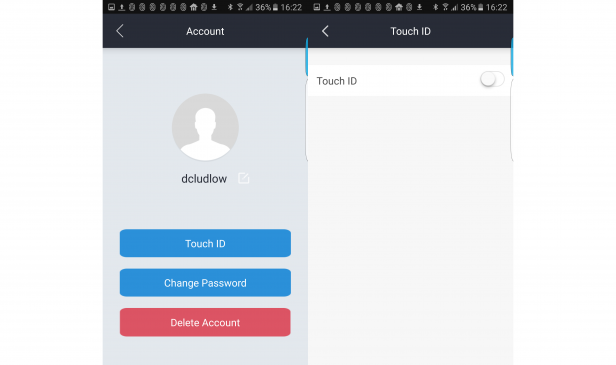 I also found that the Android app, in particular, could be very frustrating. It would regularly log me out, jump up and take focus, or throw me back to the camera selection screen instead of letting me view recorded footage. While the iOS version didn’t suffer from quite the same range of problems, the app remains clunky.

Following a chat with Smanos about the issues, I was told that an “unannounced update on Amazon’s side” was causing the issues. The iOS app was due an update, but the Android fix would take a little longer.

There’s no cloud storage option available, so you’ll definitely want to install a microSD card. Without a memory card, the UFO can’t record any footage or even save a thumbnail of movement. When a camera is so reliant on storage, it seems unfair to ship the camera without any built-in memory or external cards. 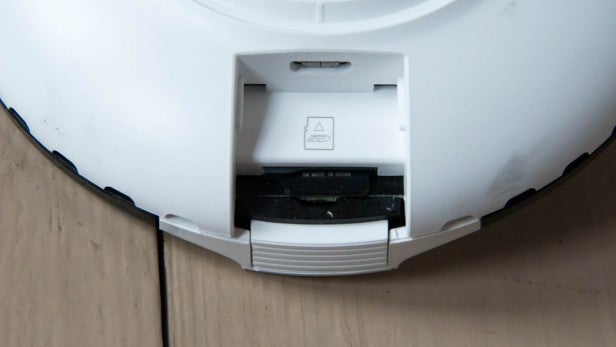 When recording footage, you can set the camera to one of three modes. Fish-eye gives you the full view, with the entire frame condensed into a circle. Panorama provides you with the centre portion of the image, for a full wide-angle view. Then there’s the odd Quad view, which splits up the video into four equal quarters.

The latter mode only works properly when the camera is mounted on the ceiling, with the app rotating each quarter, so it’s aligned properly. In stand-mount mode, every quarter is at an odd angle and it looked a little as though MC Escher designed the interface. 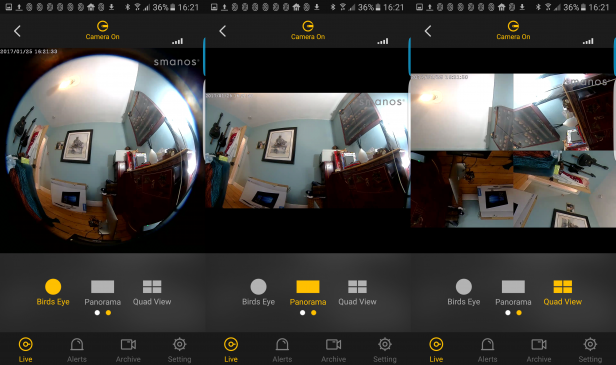 A built-in microphone and speaker let you talk to anyone that you can see on camera. It works well, with little delay, and could be useful for giving any would-be thieves a little scare.

The Smanos UFO has very few options. For motion detection, you can either turn it on or off, and set the distance option for sensitivity (Near, Medium or Far). You can also set a schedule for motion detection; it’s a shame there’s no geofencing to turn the camera on and off automatically. 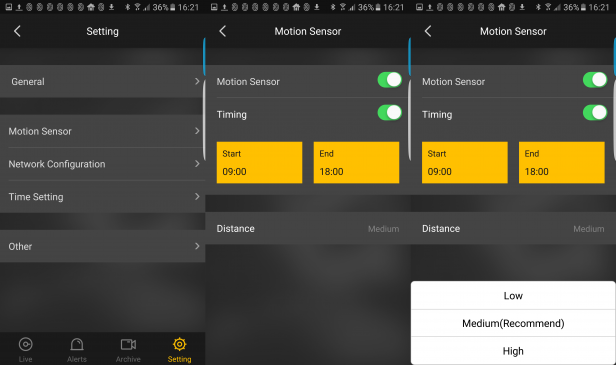 Footage is recorded to the SD card in a constant loop, so you’ll always have the footage before and after motion is detected. However, the size of SD card will determine how much footage is actually stored. A 16GB card should provide three-to-four days of recording; I recommend opting for the maximum 32GB to get about a week’s worth of footage.

Motion detection events are saved in a log. This rather ugly list at least makes it quick to jump to an event and view the matching incident. To scroll through all footage that the UFO recorded, you can just go to Archive section and select “Records”.

When playing video, you can save clips or still grabs to your mobile device. Anything saved is kept in-app, so you have to go to Saved section and export anything you’ve stored if you want to use it elsewhere.

Still, the ability to export video and still footage is useful for retaining evidence. Well, provided that the thieves didn’t decide to take your camera away when they broke in, that is. 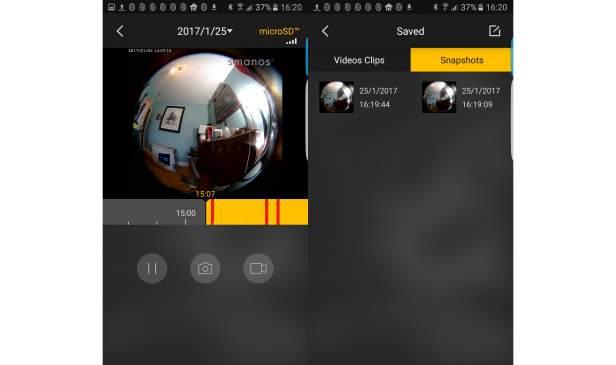 The Smanos UFO can record at 1080p, although the wide-angle lens means that a lot of data is being compressed into that resolution. As a result, finer detail tends to get smudged out, particularly when using the fish-eye view. Even so, and importantly for a video camera, it’s easy to recognise people in shot. 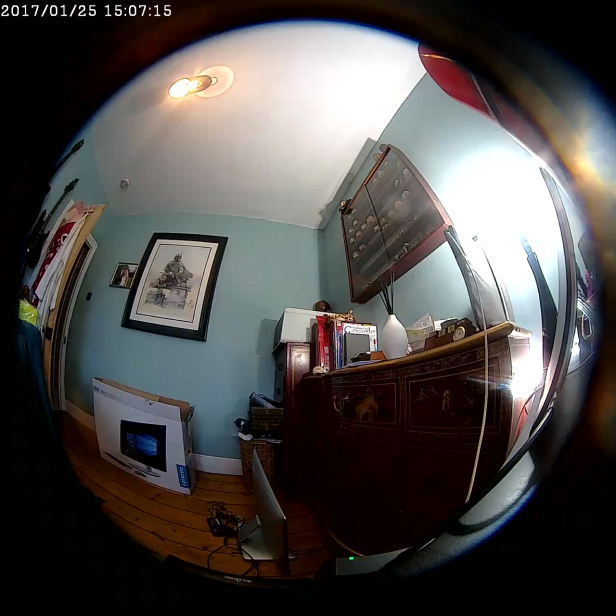 When it gets dark, the UFO switches on its infra-red LEDs, which had no problem lighting up my room. As is typical, IR tends to blur our details further, although it’s still possible to recognise individuals. I’ve seen better image quality, but the UFO’s footage is still decent. 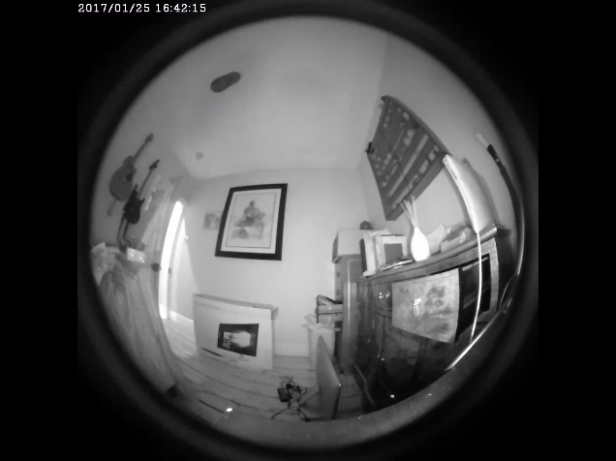 Should I buy the Smanos UFO?

It’s a clever idea, but the Smanos UFO is let down in several ways.

The lack of cloud storage is disappointing, since it means that the possible theft of the camera will result in the theft of your evidence too.

The poor and unreliable app on both Android and iOS makes the camera frustrating to use at times. And, the lack of options makes it hard to fine-tune this camera. I’d happily ditch the wide field of view and opt for a better-performing camera, such as the Netgear Arlo Q, Nest Cam or Netatmo Welcome. Of course, those require a monthly subscription for a week’s worth of storage, so if saving money is your priority, an SD card-only device is your best option. 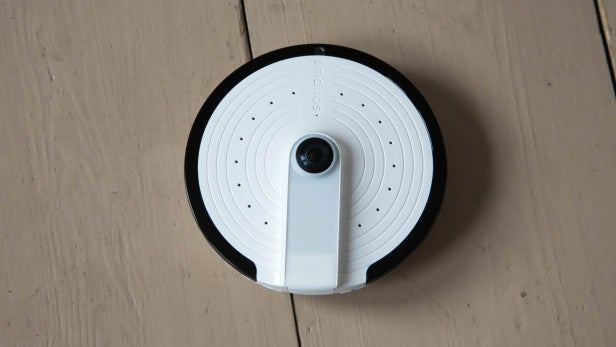 The Smanos UFO is a clever idea, with the camera easily able to capture footage of an entire room – but the lack of options and poor apps are a significant letdown.

Video: Trusted explains how to fix your home Wi-Fi nightmares