We’ve seen enough projectors from Sim2 now to know that the brand is seriously, um, serious about picture quality. So much so that no less luminous and usually reclusive movie-world figures than Francis Ford Coppola and David Lynch have been prepared to officially endorse them.

But even our previous stellar experiences with Sim2 projectors couldn’t prepare us for the sheer unadulterated majesty of the pictures produced by the Superlumis. In fact, it’s so good we completely forgot it was there! 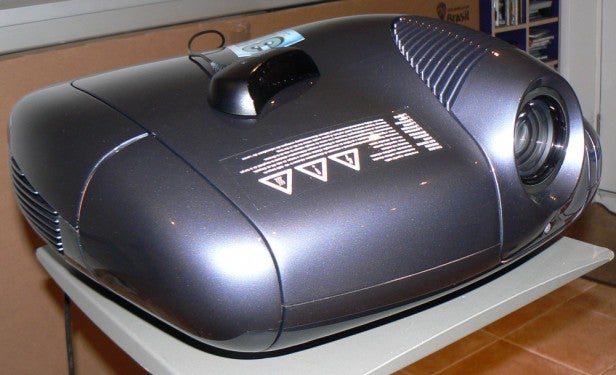 If this last statement sounds a bit perverse, think about the experience of going to a cinema. How often do you sit there thinking about the projector that’s producing the pictures you’re watching? For most people, we’ll warrant, the answer is hardly ever. Instead you’re totally focussed on how good the FILM you’re watching is, as you’re lost in that rather than the technology that’s showing it.

This is the level of performance the Sim2 Superlumis gets to as well – only it does so in the comfort of your own home rather than in a popcorn-strewn cinema filled with total strangers. Who probably smell funny.

The phenomenal power of its lamp plays an enormously significant role in making the Superlumis’s pictures so special – even when compared with the stellar efforts of other Sim2 Lumis models before it. For starters, it obviously helps that pictures look explosively bright and vibrant thanks to the sheer force of light that’s cannoning out onto your screen. But more important is how Sim2 applies this extra brightness.

Particularly critical is the way Sim2 has been able to deliver such brightness without compromising black level, delivering a native contrast performance that’s so good it’s silly.

This is an enormously difficult trick for a home projector to pull off – indeed, it may well not be possible on any halfway affordable model. Sure, JVC’s D-ILA projectors can produce incredibly deep black levels, but as already noted they don’t partner this with anything like the Superlumis’s light output.

Still being able to deliver a convincing black colour alongside outstanding brightness levels without needing a dynamic iris means the Superlumis is peerless when it comes to reproducing the sort of subtle shadow details that are so important in making dark scenes look convincing.

It’s also crucial to the sense of immersion the projector creates that light levels are completely stable, with none of the distracting brightness ‘shifts’ you get with projectors that rely on dynamic irises for their contrast.

As for the potentially tricky issue of sharpness and detail now that 4k-resolution projectors are starting to appear, all we can tell you is that we constantly felt dumb-founded by the sense of density, precision, refinement, colour nuancing and clarity in the Superlumis pictures. Basically it proves categorically – with even a bit of swagger – that making projected digital pictures look like celluloid doesn’t only involve throwing more pixels at the problem.

Underlining the already incredible sense of image clarity is the Superlumis’s almost complete freedom from video noise, and some pretty much immaculate motion handling that needs absolutely no ‘help’ from the provided motion handling tools.

While we’ve focussed for our tests on the Superlumis’s performance in dark room conditions, one extra benefit of its extreme brightness we should mention is that it’s much more usable in rooms with ambient light in them than your average projector. Partner it with a very high reflection screen like the Screen Innovations Black Diamond, in fact, and a Superlumis could even become your main ‘TV’! Now there’s a thought.

The only problem we could find with the Superlumis pictures is a tiny bit of dot fizzing over moving skin tones if you use the lamp’s very highest settings. However, even with the lamp output reduced to a level (about 310 of its maximum 350W) where these skin artefacts pretty much disappear, the Superlumis still produces images of a punch and potency that just isn’t available in the mainstream world. In fact, we’ve been to commercial cinemas where pictures didn’t impress as much as those of a calibrated Superlumis.