What is the Sim2 Superlumis?

Probably as good a way as any to introduce the Superlumis projector from elite Italian home cinema brand Sim2 is to say that it arrived into our test rooms fresh from a test-run in the movie room of an extremely well known Premiership footballer. In other words, it’s high end with a capital high, combining a three-chip DLP projection engine with mega-high brightness and ultra-precise optics in a stylish package that can be yours for a ‘mere’ £37,000.

In some corners of the high-end projection market, it appears to be almost considered vulgar to want a projector to look good. Thankfully Sim2 has no truck with such nonsense, instead taking the view that if someone’s going to spend 37 grand on anything, they’ve every right to expect that thing to look drop-dead gorgeous.

In fact Sim2 has gone so far as employ the legendary design skills of Giorgio Revoldini in creating the chassis of the Superlumis, and the results are mouthwatering. It’s a gleaming, beautifully built curve-fest dominated by a bulging lens barrel that looks like something you’d expect to see wrapped around a jet engine. The gun-metal grey colour scheme is lovely, too.

It’s impressive to note, too, that the Superlumis’s footprint isn’t substantially larger than that of a typical good quality mainstream projector, despite the obscene amount of horsepower tucked away under its voluptuous bonnet.

Heading up this ‘horsepower’ is a 350W lamp capable of delivering a collosal 5000 Lumens of brightness. This trounces the 3000 Lumens you get from the 280W lamp of a normal Sim2 Lumis projector, and utterly dwarfs the sort of brightness figures obtained from your typical mainstream home cinema projector. Even JVC’s brilliant X75 and X95 projector models only muster 1200 ANSI Lumens.

This copious amount of light is transported through the Superlumis’s optical system by Sim2’s proprietary ALPHAPATH technology and a new, improved version of Sim2’s wonderfully-named ‘tapered rod integrator’, designed to boost light and colour uniformity.

Naturally there’s a suitably high-grade lens for all the extremes of light and colour accuracy to emerge from, and it pretty much goes without saying at this price level that the Superlumis uses a three-chip DLP system rather than the single-chip model employed at the mainstream end of the DLP projection market.

This is massively significant, of course, since it means there’s no need to use the colour wheel systems required in single-chip DLP configurations, resulting in much more nuanced and accurate colour reproduction and none of the fizzing motion and colour striping ‘rainbow’ effect associated with single-chip DLP projection.

There is one feature the Superlumis does not have, though, that doubtless some people will think it should have for £37,000: a native 4k pixel count. While 4K DLP projection chipsets do exist, they’re currently tied up by an exclusivity deal with the Digital Cinema Initiative (DCI) which means 4K DLP chips can’t be used in domestic projectors until 2015.

With Sony just launching a native 4K projector for under £9000 it’s certainly tempting to see the Superlumis’s full HD native resolution as a bit of a stumbling block. But as well as pointing out that a native 4K version of the Superlumis would cost a likely insane amount more than the current projector does, as we’ll discover in the performance section resolution is far from the only component in producing truly stellar picture quality.

Given the potentially large variance in room sizes a projector of the SuperLumis’s pedigree may find itself in, it’s no surprise to find it available with a selection of lens configurations: the short-throw T1, the mid-throw T2, and a long-throw T3 option. Additionally you can opt for an Enhanced Contrast (EC) lens that reduces the brightness to around 3800W but boost black levels. 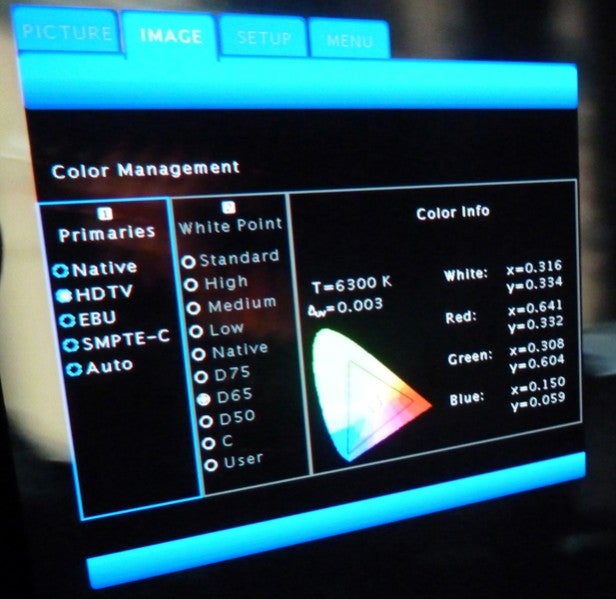 With a projector like the Superlumis, its optical components and configuration are by far its most important features. But we’ll have a quick look at some of the other interesting bits and bobs it offers.

Connectivity includes two HDMIs (three might have been nice, though a projector at this level will likely be integrated into a wider home cinema system incorporating some other HDMI switching device), three 12V triggers and an RS-232 control port. There’s also a port for attaching the projector’s external 3D transmitter, which is provided free (as you’d hope!) along with four pairs of active shutter glasses.

The projector also carries some fairly heavy duty motion processing – even though it’s unlikely many serious AV enthusiasts would dream of using it! – as well as, more usefully, just about the most infinitely flexible calibration system you’ll ever see. Which brings us handily to…

If you want to get involved with making your own adjustments to the Superlumis’s pictures, be warned: neither the onscreen menus nor the remote control are as intuitively designed or as good looking as they should be.

The amount of flexibility available through the Superlumis’s menus, though – especially thanks to the Live Colours software supplied free with the projector – is truly spectacular, enabling you to fine tune colours to suit your environment so accurately that they’re pretty much perfect according to the industry’s key video standards.

However, this flexibility together with the rather ugly and unintuitive menus also makes the Superlumis quite a daunting prospect. Handy, then, that anybody who buys a Superlumis will surely have it professionally installed for them, leaving them with little more to do than switch inputs.

We would, though, recommend that you are in attendance while your Superlumis is being installed, and that you’re not afraid to have some input over what motion processing if any is used, and what level of light output is chosen via the projector’s brilliantly flexible manual lamp power selector. Too much motion processing can make the Superlumis’s pictures start to look unnatural, while some of the high lamp output settings can cause a noticeable jump in the projector’s running noise.