Sharp is back in business in the UK, returning with a range of new domestic appliances promising frugal running costs and cutting-edge features. The ES-GFD9144W3 is the first of the new breed of Sharp appliance to land on our test bench, and proves that in its absence it has gained plenty of ground when it comes to new technology – if not a better product-naming protocol.

It’s fairly simple, which is just as well given the breadth and scope of programmes available. The large, central knob clicks around to select the required programme, while additional features are added to each wash by individual touch buttons that sit beneath the display panel. There is a degree of setup required from the off, such as the time, lower energy cost periods of the day, display language, and so on, but it’s all pretty straightforward and the manual is easy to follow too.

Over to the right, the display panel and buttons are a little more complex. The display is a subtle blue-on-black LCD unit with an array of graphic symbols to denote many of the key features.

While temperature (a thermometer) and spin speed (a spiral) are relatively self-explanatory, the two pictures of T-Shirts with stains, a page document symbol and an up arrow are considerably less obvious. The user manual will need to be by your side for the first few uses, or you can randomly stab buttons until you work out what the machine will do – as we did. 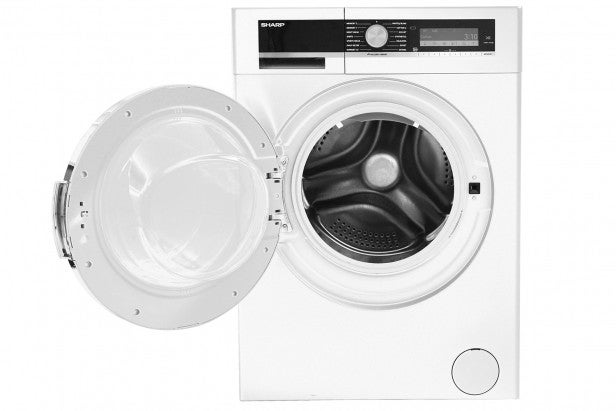 The buttons are soft-touch controls that take the “soft” to a whole new level. A very light brush of a finger will activate the function, while the main dial takes a fairly hefty turn and clunks into place for each programme.

The simplicity of the traditional dial and the modern, rather confusing symbol-based display are a little at odds with each other, and this only serves to make operating this appliance a little less than straightforward until you get the hang of it.

From the outside, the near-opaque black door is huge; it’s almost the full width of the appliance, promising a porthole opening big enough to throw in a duvet without touching the sides. Well, at least without a struggle anyway. In reality, the porthole opening is much smaller than the outer diameter of the door, meaning you’ll need to wrestle larger, bulky items into the drum as you would any standard-sized-door machine.

The inner drum itself sports Sharp’s “Bubble Drum” design, which aims to aid washing while protecting your clothes from the rigours of washing. The Doublejet system uses twin high-pressure nozzles in the upper portion of the drum to jet a mix of water and detergent straight into the washing for direct cleaning results.

The ES-GFD9144W3 is a limited “sensor” machine, so while it falls short of measuring exact load size, the material types placed in the drum or the turbidity of the water, it does detect when you’ve loaded only a small pile of washing and will set to half-load automatically.

In all other respects this is very much a traditional machine, with a typical detergent and fabric conditioner drawer located top left and a flap to cover the pre-pump debris trap at the bottom right.

It isn’t often that an appliance measures exactly as the energy label states when it comes to sound output, but even more rarely does it measure so much better. The Sharp breaks with this trend. While the energy label suggests a fairly run-of-the mill 58dB wash noise and 76dB at maximum spin speed, in reality we measured 55dB average for the wash noise and a smidgeon over 70dB for the full 1,400 spin.

These noise output numbers are more akin to premium machines and very respectable for a mid-priced machine. The wash noise at 55db is similar to that of the gentle burble of a coffee percolator, and 70dB is no louder than the volume that most people have their TVs or kitchen radios. 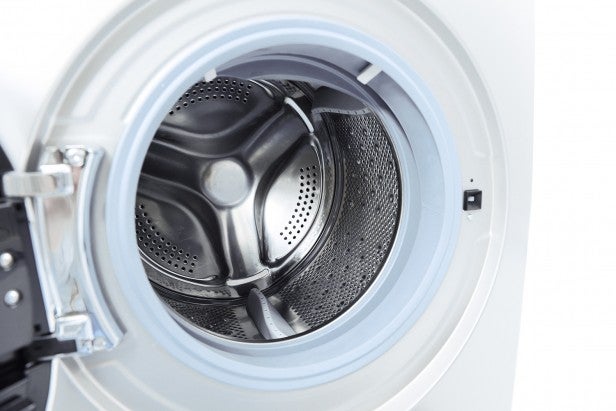 Since this is a semi-sensor machine, the programming begins by you selecting how dirty your washing is on a three-step scale from lightly soiled to “back from Glastonbury”. The selection progressively lengthens the overall programme duration.

For stained clothing, a separate control scrolls through a potential 22 common stains, from red wine to make-up, and tailors the main selected programme to suit the stain. This selection covers general muckiness through to true stains, including collar grime, sweaty sports clothing and mud.

It isn’t easy to put an exact figure on how many actual programmes this Sharp has, since the list is comprehensive and several programmes offer differing options and sub-programmes. The headline cycles include Cottons at varying temperatures, Synthetics, Delicates, Whites/Jeans, Sports Wear and Shirts, as well as a basic daily 60oC programme. 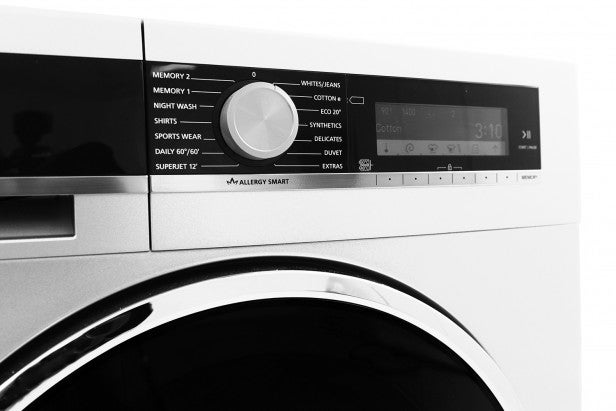 Secondary or sub-programmes include a Duvet cycle, Silks, Curtains, Wool, an Allergy programme for sensitive skin and a 12-minute rapid wash for loads up to 2kg dry weight.

Intriguingly, there’s also a Night programme that does the washing quietly and goes into rinse/spin hold mode so that the noisy bit of the cycle begins in the morning. A dedicated Eco programme washes at just above incoming cold water temperature at 20oC.

Then you have a number of auxiliary tweaks to each programme including adding a pre-wash, extra rinse, anti-allergy cycle with more rinsing, and an easy-iron feature to reduce wrinkling of your laundry. You get the option to delay start or a programmed end time, and the ability to automatically start the cycle when your Economy7 electricity is at its cheapest.

If that seems like rather too much choice and decision-making required, it probably is – particularly since most people use just one or two programmes. The Sharp caters for this nicely with two Memory programmes. Each can hold all the details of your favourite programme with your regularly selected add-on features, allowing you to access them at the touch of a button.

A test strip went into the first wash, stained with dried-on juice, coffee, turmeric, oil and blood – five of the toughest stains to shift. All loads were washed using a leading brand of non-biological powder, ensuring that there was no detergent enzyme help where wash performance is concerned.

Many A+++ machine tend to take more three hours on a full load cycle, saving energy by allowing for long soak times to loosen dirt and stains rather than drum action. It was a pleasant surprise then to discover that the Sharp completed the main wash in 2hrs 38mins and used just over three quarters of a single kilowatt/hour of energy. At current electricity prices this is about 12p, so very frugal indeed.

Water consumption of just under 80 litres for the wash was a little higher than some A+++ machines we’ve tested, but not by a huge margin. If you’re on metered water, the Sharp might use around 3,000 litres more per year than the most efficient appliances on the market.

This machine is also very good at spinning all that water out of your washing, leaving just 2.3kg (32% of dry washing weight) behind after the final 1,400 spin. For spin performance for a full load, that’s up there with some of the best machines on the market, and will certainly reduce your overall costs if your clothes move straight from the washing machine into a tumble dryer.

The stain strip test showed that the Sharp was putting its energy and water to good use too. The coffee and blood stains were removed completely without trace, while the turmeric and juice stains were significantly reduced. With biological powder those stains would certainly be history. As expected, the engine oil hung in there rather tenaciously, but the Sharp did have a reasonable stab at reducing the harder grime within the oil. Overall, a fine wash performance and one we’d certainly expect from a machine in the £400-600 category.

The half-load wash didn’t reduce either energy or water consumption by much, meaning this would be a machine best run on full-load washes. Wash and spin performance remained very good, with the reduced volume of washing allowing the 1,400 spin to leave just 1.1kg of water (30% of dry weight).

Half-load on the Sharp’s Eco wash was quite a different cycle altogether, using just over a quarter of a kilowatt/hour or 4p of electricity to run. Water consumption was fairly good at 45 litres, although the reduced spin power did mean that more water (1.5kg/41%) was left behind in the washing. This is for use on lightly soiled loads, on days when you can hang your washing out to dry.

The Sharp works well and lives up to its A+++ energy rating with style. Our typical average use per annum calculations are based on 240 wash loads. This are split into 200 full-load cotton washes and 40 half loads, the latter of which is split 50/50 into standard cotton and Eco washes.

Our test results show that this Sharp would use around 172kWh per year, which at 15p/kwh (not factoring in cheap rate electricity or deals) would cost you about £25.80. That’s a whole lot of washing for less than £30 worth of electricity a year!

This annual wash-fest would see this Sharp use just shy of 18 cubic metres of water, or 4,000 gallons in old money. With a greater number of people now on directly metered water, the commodity is becoming an increasingly significant running cost for washing appliances. As such, we decided to factor the cost of water into the total running costs too – and the results may surprise you.

With this A+++ Sharp appliance using nearly 18 cubic metres of water per year, that equates to a further running cost of £62 – well over twice that of the electricity used! 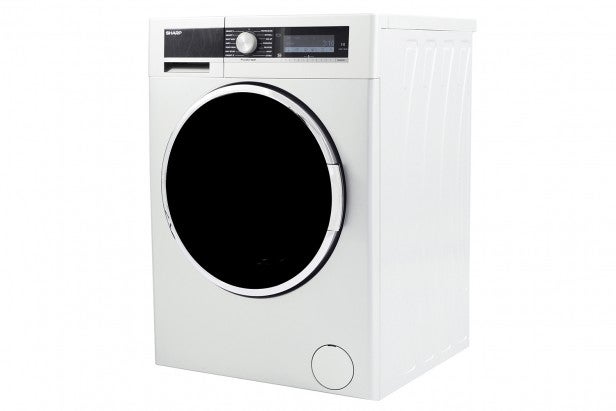 Sharp’s re-entry into the UK home appliance market kicks-off in style with a well-specified, solid-performing and very efficient ES-GFD9144W3. The programme and options selection could prove a little bewildering at first, and water use is a little higher than some rivals at the price. Overall, however, this Sharp is a worthy new competitor to the established brands for mid-market washing machines.

Not a record-breaker, but the ES-GFD9144W3 is a good option for the price.