When cleaning hard floors you want to be able to cover maximum ground at the fastest speed possible – and the Shark Klik n’ Flip Automatic Steam Mop S6003UK delivers just that. Thanks to its flip-over head, you can keep going without changing cloths, and you can get right to the edge of rooms, too. The model featured in the images was a special edition version, but the current model is the same in slightly different colours. 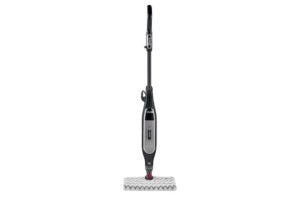 Get the Shark S6003UKDB steam mop with four cloths and a carpet glider for just £99.99

Shark S6003UK design and features – Simple to use, with great coverage

The Shark S6003UK looks much like any other steam mop: it’s a tall stick with a microfibre pad at the bottom. However, the Klick n’ Flip name tells you that there’s something more to this model.

While most steam cleaners have to make do with regular pad changes, which can be fiddly, Shark uses a clever double-sided pad. Just pick up the cleaner, tilt the head the other way round, and you can clean using the fresh side.

Shark has designed the round handle to work with the cleaner positioned either way around, so there’s no ergonomic difference when you change the side of the head you’re using. However, the controls are slightly harder to reach on the reverse side. But since this machine automatically doses steam, with three settings (Hi, Med and Low) to suit different floor types, once the mop is on you won’t need to access the controls regularly.

The steam burst mode is only accessible when the mop head is reversed. Spin the mop around and pull it back, and it shoots out a burst of high-pressure steam for tackling those tough spots on the floor.

Next, Shark has developed a method whereby you can change mop heads without having to touch anything. Click down on the eject button and the cloth holder flips open and dumps the old cloth. Just press the head down into the back of a new cloth and it locks into the pockets and can be clicked closed. There’s no steam cleaner that makes this job quite so easy.

With this model, you get two cleaning cloths in the box – up from the two that come with the regular model. A plastic carpet glider is available as an optional extra (£19.99), which lets you run the cleaner over carpet for some basic cleaning.

Starting your clean is simply a matter of using the supplied jug to fill the 0.38-litre tank, powering on the mop and giving it a good minute or so to warm up before cleaning. Thanks to the 8m power cable, you’ll be able to reach most of a floor without having to switch out the plug into a different socket.

The mop is quite wide, so it’s harder to get it into tighter spaces, and you don’t get a pull-out handheld section, so the S6003UKDB is built to clean hard and sealed floors only. In addition, it doesn’t stand on its own, so  take care when leaning it against something if you want to pause while cleaning.

I started by tackling my hard kitchen floor, which is often quite messy as a result of three cats traipsing in and out with their dirty paws. Putting the S6003UK into Hi mode, I found that it easily cut through most of the mess, removing the dirt without leaving the floor too wet.

One of the additional benefits of the Klik n’ Flip system is that the folded section of cloth at the front of the mop allows you to get close to the edge. In this regard, performance beats other steam mops I’ve reviewed.

Tougher stains, such as dried-on cat food wouldn’t come off via the mop alone; they required a burst of steam to loosen them. It took a while to do, but the end results were impressive. The Hoover Steam Capsule 2in1 made shorter work of these types of stains as a result of its brush attachment, but it falls behind for edge performance.

Next, I tackled the outside patio, which often bears my own muddy footprints from walking to and from the garden office. Again, a few sweeps on maximum power was enough to remove the dirt.

The Shark S6003UK is impressive in the way that it spreads steam across the entire span of the cloth. At the end of cleaning, you can certainly see on the cloth how much dirt has been lifted.

On Max power, I found that there was enough water in the tank to cover my kitchen and hallway, but I had to refill a couple of times to tackle the entire house.

Switching down to the Low setting, wooden floors proved no problem at all, with the Shark S6003UK cleaning the mess without saturating the floors. You can also use this setting with the carpet glider to tackle floor coverings.

As with all steam cleaners, carpet performance is okay – but nothing to shout home about. You don’t get the deep cleaning that results from using a carpet cleaner; this mode is more for general surface dirt, as a quick way of keeping rugs and carpets in shape.

At its discounted price, the Shark Kick n’ Flip Automatic Steam Mop S6003UK is something of a bargain. The original model was already the most powerful floor mop we’d tested, and with this model, you get extra cloths and a carpet glider, all at a lower price.

If you need to tackle more than just floors, the Hoover Steam Capsule 2in1 may be a superior option. For delicate floors that you don’t want to leave damp, the Karcher FC5 sucks up dirty water as it cleans, and you can check out our alternative steam cleaner best buys and top hard floor cleaners if you’re after something else.

However, for most homes looking for a quality steam mop for hard floors, the S6003UK is easy to use, powerful and cleans right up to the edge.