What are the Sennheiser Momentum 2.0 On-ear?

The Sennheiser
Momentum 2.0 On-ear are the second generation of a series of headphones
that’s proven extremely popular, and with good reason. While they may
not have unseated the Beats range as king of headphone sales, they’re
now recognised as one of the few ranges that marries top style with top
sound quality.

At £170 they’re easy to recommend over sets such as the Beats Solo 2
and almost all other style-driven headphones in this class. The one
sour note is that while they’re an improvement over the first
generation in a few respects, the Sennheiser Momentum 2.0 On-ear still
don’t offer particularly good noise isolation. 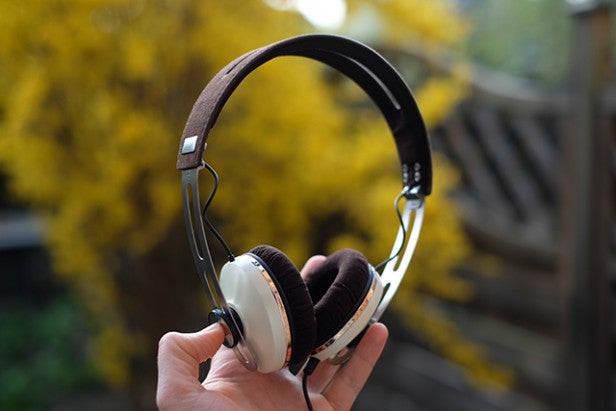 The
Sennheiser Momentum 2.0 On-ear are portable headphones with fairly
small earcups. As the name suggests their pads sits on your ears, rather
than encompassing them with giant pads.

They are all the more
important in this second generation, because the ‘full size’ Momentum
2.0 are bigger than last time around, sure to displease a few who are
after relatively small-looking headphones. This on-ear set doesn’t seem
to have gotten radically larger in its second iteration: the pads have a
different shape, but the cups are roughly the same. 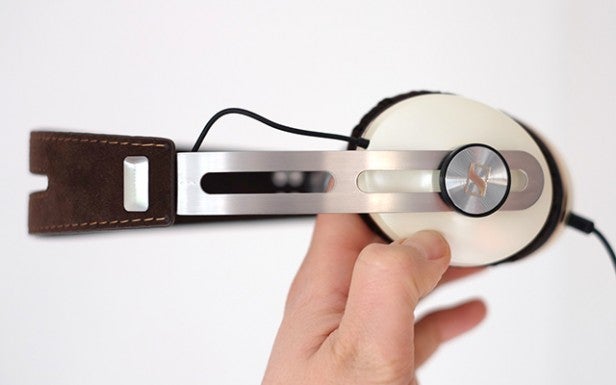 The
Momentum series has always prided itself on using materials that look
and feel a bit fancy. A few years ago 90 per cent of Sennheiser
headphones were black and boring-looking. The Sennhesier Momentum 2.0
On-ear are not.

Out set uses cream cups with a brown headband and
gold accents around the pads. It’s shiny , eye-catching gold, so make
sure you take any little flourishes like this into account before
picking a shade. This bonus boldness seems to be something we gain with
Momentum 2.0.

There’s nothing quite so contentious about the
Sennheiser Momentum 2.0 On-ear’s pads and headband. Sennheiser says it
has increased the pad thickness for extra comfort, and both headband and
the pads are topped with Alcantara. This is a hard-wearing manmade
fibre that has some of the tactile quality of felt, while being tough
and water resistant. We’re fans. 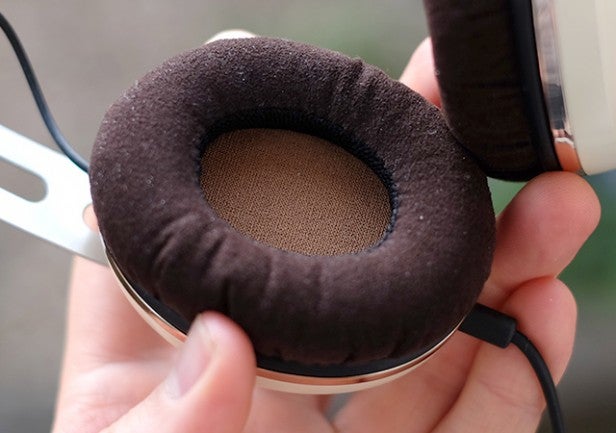 As
before, the headband is made of steel, and is split at the top for
extra stability. These are well-designed headphones whose sense of being
an upper-tier set isn’t dimmed by the use of plastic for the outer of
the cups.

The full-size Sennheiser Momentum 2.0 beat this on-ear
pair for comfort, but the On-Ear manage the balance of headband tension
and ear comfort well. They stick on your head tightly enough for
joggers, but don’t cause ear ache. The only people that need worry are
glasses-wearers with sensitive earlobes.

We get greater
portability this time too. The first Momentum On-ear pair were designed
for outdoors use primarily, but didn’t have a folding design. This pair
does. They use an impressively discreet hinge built into the headband,
letting the Sennheiser Momentum 2.0 On-ear fold up to half their usual
size. 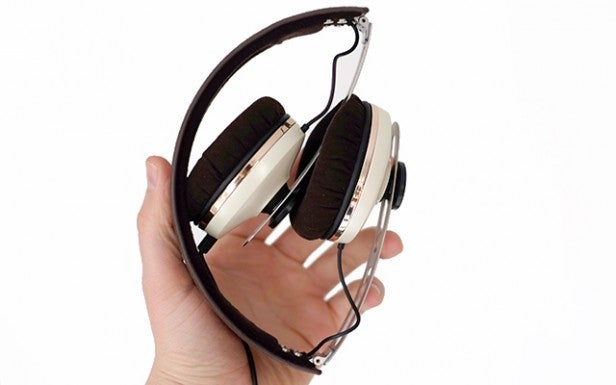 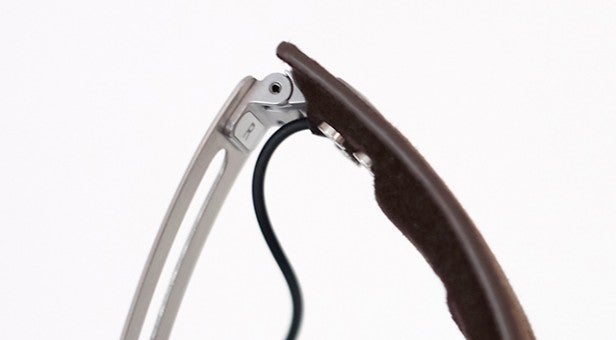 One
element we do wish Sennheiser had managed to fix a bit better is noise
isolation. It’s just not that good, just like the first generation.
Having used the Sennheiser Momentum 2.0 On-ear on trains, both
underground and overground, we’re actually fairly pleased with how the
robust sound copes with noise. But if you’re looking to block out the
outside world you’ll be disappointed.

This is the only major
design negative, though. We like the removable cable, and its use of a
three-button remote is welcome (if more-or-less standard these days).
It’s designed for iPhones primarily, but the central button also works
with Androids to play/pause your music. 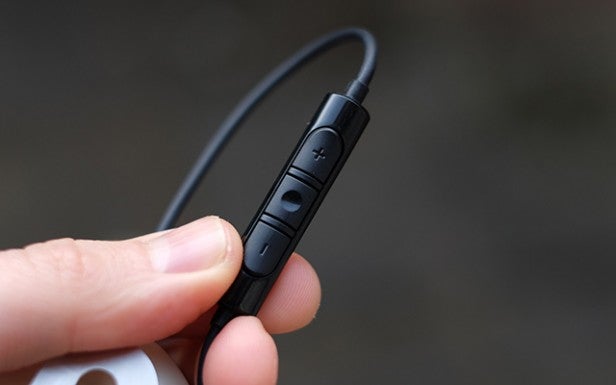 The
Sennheiser Momentum 2.0 On-ear have a sound not terribly different from
the first generation on-ear set. But that’s no bad thing. These are
some of the most enjoyable style/comfort-driven headphones in this
class.

They sound beefy and rich, with a bulkier, thicker signature than the full-size Momentum 2.0 pair. We like the sound, a lot. 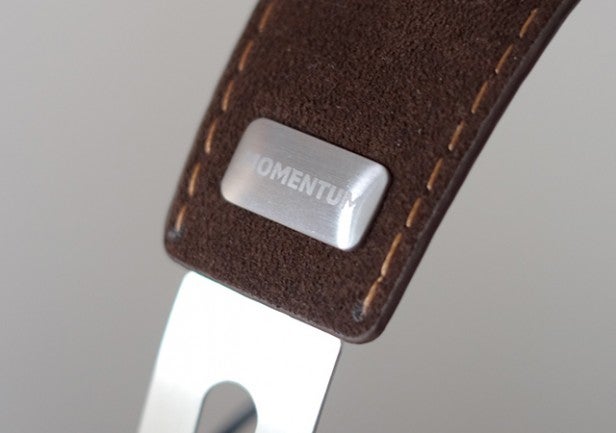 It’s
not the sort of sound you’d want to use in a home studio to mix tracks
with as it’s that bit too warm and not all that critical. However, it’s
exactly what we want when out and about just enjoying music.

Like
the other Momentum sets, bass and sub-bass are great, with plenty of
power but also very good control. The Sennheiser Momentum 2.0 On-ear ace
the balance of having enough bass to sound fun, without it becoming
unruly, swamping the mids. 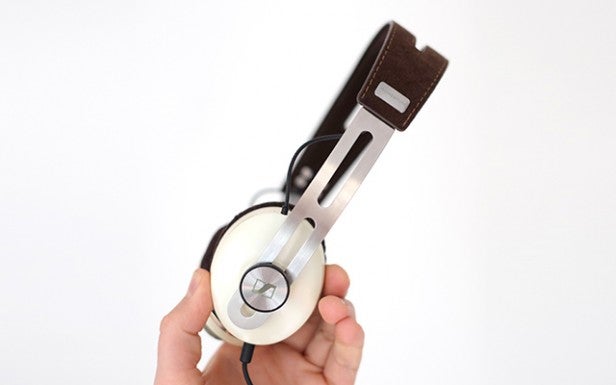 Compared
to the Beats Solo 2, these headphones’ clearest rival, the Sennheiser
Momentum 2.0 On-ear sound a little more balanced, more natural and a lot
more relaxed. They lack a little of the pure energy of the Solo 2s, but
the Sennheisers still have plenty and offer a very involving listen.

Like
the Beats set, soundstage width and scale is excellent for a fairly
small, closed set too. There’s a little less treble detail than in the
full-size Momentums, but then you’d expect that when they cost a full
£100 more. Treble tone is pleasant. It’s easygoing rather than sharp and
revealing. They’re quite forgiving headphones that make most content
sound good. 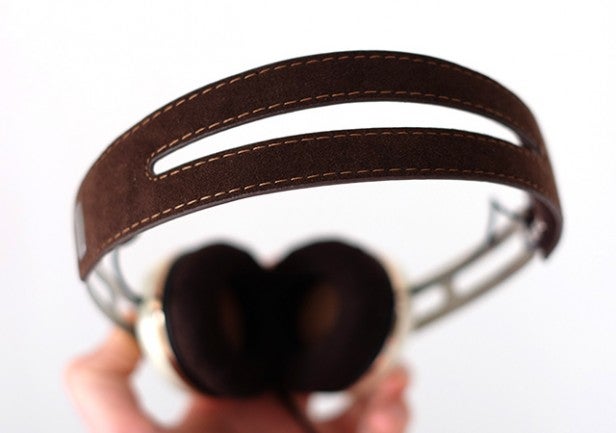 The
robust tone is also very important in dealing with the Sennheiser
Momentum 2.0 On-ear’s one weak point: poor isolation. Beefy tone ensures
that while they don’t block out noise, your music usually isn’t drowned
out unless there’s a lot of ambient sound. In other words, wearing them
on trains is fine, but we found the London Underground’s Northern Line
really tested the Sennheiser Momentum 2.0 On-ear to their limits. 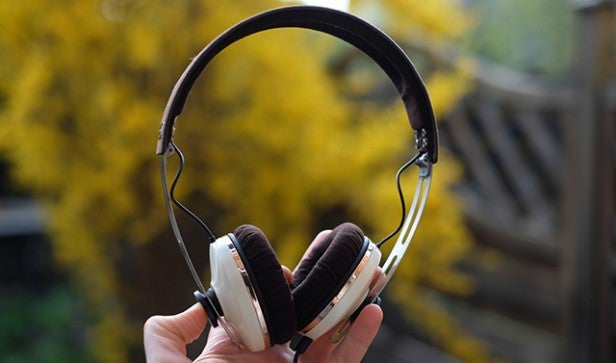 Should I buy the Sennhesier Momentum 2.0 On-ear?

The
Sennheiser Momentum 2.0 On-ear are excellent headphones with some
meaningful practical improvements over the first-generation model.
Namely, they’re a bit more portable.

They have power similar to
the Beats Solo 2, but with a more discerning tone that cuts out those
moments where style headphones go a little bit too bass-heavy.

The
only issue is the same as we had first time around: they just don’t
block out sound that well. For 90% of the time it didn’t spoil our
enjoyment of these otherwise quite excellent headphones, but do bear it
in mind if your commute involves a stint on the Tube or somewhere
similarly noisy.

Other than that, though, dive right in.

Attractive, classy and involving headphones only let down by limited sound isolation.