Well, here’s something different. At first glance the Sennheiser Ambeo Smart Headset looks like any other pair of headphones, but it’s actually far more than that.

Indeed, it functions as an in-ear set of headphones. But it’s also packed with extra tech for noise cancellation, speech enhancement, and an innovative microphone configuration for binaural ‘3D’ recording.

Combined, you’ve got a device that defies categorisation. In my years of audio/video tech reviewing, I’ve never seen anything quite like it. Not only am I unsure about how to define it, I’m also unsure who it’s for. What I do know is that this is a fresh and genuinely innovative direction for headphone technology, and that it’s a potential game changer in the personal audio market.

For the launch of the Ambeo Smart Headset, Sennheiser took me around London to test it out in various locations. A full review will come soon, but meanwhile here are my first impressions.

To call the Sennheiser Ambeo Smart Headset a pair of headphones would be a gross oversimplification, but there’s no doubt that they look like headphones. There’s a Y-shaped cable, of which one end attached to your phone, while the opposite ends go into your ears.

As with hook-shaped in-ears, the drivers go into your ear canal while the cable loops over and behind your ear. This is to improve stability, but also to reduce noise from the cable rubbing against your clothes. The phone end is a Lightning connector for iOS devices running 10.3.3 firmware or later, but I’m told that an Android-friendly USB-C version is set to arrive in the second half of 2018.

So far, so ordinary. The unusual part is that each earbud houses a substantial grille – these are wind shields for the microphones beneath. These earbuds play sound, but they also receive sound. Why would you need a large microphone at each ear? They’re for ‘binaural’ sound – a technique of spatial audio recording designed to convey not just sounds, but also their environment.

Crudely speaking, these are headphones capable of recording surround sound. Or you could call it ‘3D’ sound. Either way, what you record will have a far greater specificity of space than anything captured with your phone or pocket voice recorder alone. You don’t even need special headphones to hear the benefits during playback; binaural recordings sound great when played through any headphones.

To understand how binaural recordings work, let’s briefly look at how hearing works. Sound very rarely enters both of your ears at the same time. There’s nearly always a slight time delay, along with differences in volume and timbre. Those difference are virtually imperceptible, but they are what your brain uses to compute the direction and trajectory of particular sounds.

Any recording that can convey such differences will in theory sound more realistic. This is the reason the Sennheiser Ambeo Smart Headset has microphones at each ear – to receive sound as close to the way your ears do. Binaural recording itself as a technique dates back well over a hundred years, but it isn’t until now that it’s been introduced in a mainstream consumer product. 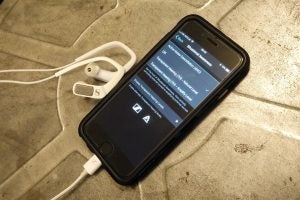 Binaural recording is a huge part of the Sennheiser Ambeo Smart Headset, but it isn’t a one-trick pony. It also offers something Sennheiser calls ‘situational awareness’, which is a combination of two popular audio tech trends: noise cancellation and transparent hearing.

Noise cancellation isn’t new, but it’s generally limited to larger on-ear or over-ear headphones. It’s nice to see it in a more diminutive package. Transparent hearing is a more recent development – a sort of evil twin to noise cancellation – that involves passing through audio so you can hear without taking your headphones off.

The chunky inline remote on the Sennheiser Ambeo Smart Headset has standard play/pause/volume up/volume down controls – but, crucially, it also allows you to vary your level of situational awareness. Turn it all the way down and noise cancellation kicks in, so you can avoid other people’s racket. Turn it up and you can order your morning latte without shouting at the poor barista. At its most extreme, the transparent hearing enhances voices above all else, which turns the headset into a sort of hearing aid.

The launch event for the Sennheiser Ambeo Smart Headset took place on an old Routemaster bus working its way around London. I didn’t have an opportunity to play music on them as I’d do with a pair of standard headphones, but I did get to play with the binaural recording and situational awareness features.

I’ll start with the latter. Old Routemaster buses are noisy vehicles, and I experienced issues trying to hear Sennheiser representatives give their product pitch. Thankfully, the headset’s claims of voice enhancement are spot on. With the mode activated, I could easily focus on voices and ignore the rumbling of the bus. Listening through the Ambeo Smart Headset, I felt as though I had supercharged hearing. I imagine that’s what being Spider-Man feels like.

Conversely, there were moments during the bus ride when I didn’t need to hear anyone speak, and I was free to play with the noise-cancellation feature. I’m pleased to say it works. I’ll need a more thorough test to determine exactly what the Ambeo Smart Headset can and can’t cancel out, but I can say that the bus’ engine was no longer audible with the feature on. It seems these little in-ears can cancel out noise as well as many large over-ear rivals. 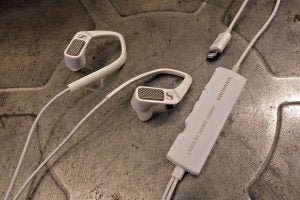 The bus dropped me off at different locations, so I could properly test the claims of binaural, spatial recording. The first stop was Piccadilly Circus, where I spent a good 15 minutes playing in traffic.

The recordings are jaw-droppingly accurate. This is the audio equivalent of a 360-degree camera – what I captured was a surround-sound snapshot of my surroundings, precise enough that I could close my eyes, listen, and relive the entire scene. The Ambeo Smart Headset captured the sensory overload that comes from standing in the middle of traffic. It’s a spacious sound with noises coming from all directions and at all heights.

The headset even managed to capture the position and trajectory of vehicles with eerie precision. Playing back the recordings hours later, I could hear a black cab going left, pass the famous billboards and down Shaftesbury Avenue. Meanwhile, a London bus (one of the quieter, ‘green’ models) went right towards Leicester Square. Somebody impatient leaned on their horn near the start of Regent Street. 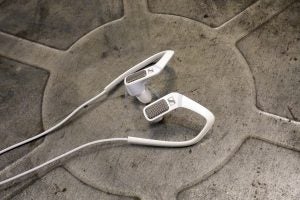 I made my recordings with both the voice memo app on my iPhone, while also filming video through the camera app. The sonic results are the same, since the recordings are made at your ears, not in your hands. If you’re shooting video, you’ll need to remember to move your head with the camera. For the sake of comparison, I filmed the same scene using the built-in microphone on my LG V30. The sound came back comparatively boxed in and imprecise, as most mono recordings are.

Another occasion saw me in a quiet courtyard, with musicians singing and playing guitar at one end, and passing traffic at the other. This test scenario was far more subtle because there were fewer sounds. But the playback was no less impressive, as I could very clearly place myself back in the courtyard hours after the event.

I could hear leaves sway in the wind around and above me. I could track the trajectory of tourists who walked past me, chattering as they went to check out the musicians. At some point during this test, I walked around the musicians – during playback, I could clearly identify where the music was coming from, whether it was directly in front, or behind me and to the left.

For good measure, I did another test, this time on a busy London Underground train. The recording was again unfalteringly precise, with tube doors slamming shut at eleven o’clock, while at three o’clock (and two seats away) a pair of Spanish ladies were speaking excitedly about something.

As we got moving, I could hear the engine getting louder, plus all the wind and reflections coming from the tunnel, all from my left. I’m playing it back as I write this at my desk and I can almost feel the room moving; your ears are responsible for your sense of balance, after all. Essentially, a good audio recording is a bit like virtual reality for the ears. 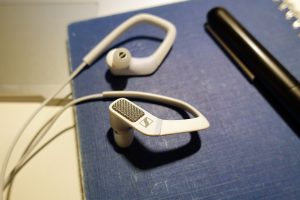 I’m reminded of the moment that cameras first arrived on mobile phones. “Why would anyone need a camera wherever they go?” asked tech journalists at the time. Yet here we are, in a world where we’re not only used to ubiquitous cameras – we enjoy them and find creative uses for them.

I feel the same about the Sennheiser Ambeo Smart Headset. “Why would anyone want to record 3D audio wherever they go?” you might ask. I don’t know, but I know that binaural audio is truly awesome, and that Sennheiser has made it accessible.

I remain unsure about who this product is for, but I can already imagine it will be handy for concert goers, travellers and even budget filmmakers. I’m not sure this particular product will be a commercial hit, but I can imagine a future where this technology is commonplace in headphones.

I’ll come back and update this article after I’ve used the headset for musical playback – but I’m seriously impressed. The Sennheiser Ambeo Smart Headset feels like the next step in the evolution of headphones.