Back in July of 2010 we spent a few days living with and pretty much loving the Black Diamond II projection screen from US brand Screen Innovations. The rather nifty trick of this unique screen was that it used a proprietary, top secret manufacturing ‘formula’ to reflect light from projectors back with so much focus and potency that you could watch your projector in lit rooms.

The thinking behind this, of course, is that it potentially overcomes one of the biggest objections people have to installing a projector in their home, as it means you don’t need to have a projector installed in a specially darkened room and so could more easily accommodate one in your normal living room.

The new Zero Edge projector screens take this initial Black Diamond ‘lifestyle’ application a step further. For as well as featuring a new generation of the Black Diamond screen technology, the Zero Edge model applies the material to an ultra-rigid, aluminium backing structure that’s presented with practically no visible frame around it at all.

If you get up close to the 100in diagonal model we tested, it becomes clear that there is around 1cm of frame around the image. But this is so small in the context of the screen acreage on show that you just don’t notice it from any sort of normal viewing distance. Especially once you’re transfixed by the ultra-bright, punchy images the screen component delivers. 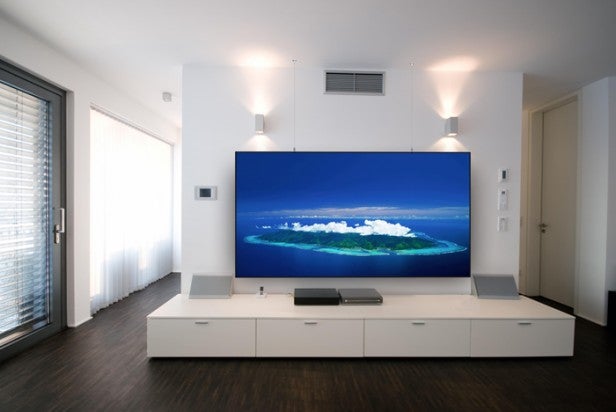 The ultra-rigid Zero Edge screen is only around 1cm deep as well, making it slimmer than any current large-screen TV. And herein lies the key point of the Black Diamond Zero Edge: it wants to offer you a larger, less visually dominant and most important of all much cheaper way of getting a truly massive ‘TV’ screen in your house. After all, while Panasonic’s 85in plasma screen will set you back around £42,000, the 115in 16:9 Black Diamond Zero Edge can be yours for ”just” £3953. Including VAT.

Obviously you also have to add a decent projector to that price before your big-screen dreams are complete, but even with a very well specified model your total spend will be miles under what you’d have to spend for a similarly huge plasma or LCD screen.

The Black Diamond Zero Edge is even available with a variety of mounting options, including recessed (at which point the frame can be fully removed), flush to the wall, projected off the wall, and even ‘flying’ from cables for the ultimate flash-harry look.

You only have to check out the couple of lifestyle images included with this article to see just how differently the Black Diamond Zero Edge allows you to think about the whole process of incorporating a projector into your home.

The Black Diamond Zero Edge is available with three different screen materials, serving up gain values of 0.8 (for relatively dark conditions), 1.4 and a 2.7 version for very bright rooms. This latter high-gain material is also considered by UK distributor Anthem AV Solutions to be the best if you expect to be watching a lot of 3D movies.

You can also get the Black Diamond Zero Edge in 21:9 as well as the more regular 16:9 ratios.

We aren’t able to tell you exactly how the Black Diamond screens do their high reflectivity thing. The most we’ve been able to get out of the understandably secretive Screen Innovations is that it’s a non-polarising fabric comprising no less than seven optical laminations including, most importantly, a unique reflective layer system. We can also say that the material has been improved for the generation three version on the Zero Edge screens by coming in darker colour options – thereby permitting better black level response – and delivering a wider viewing angle before parts of the picture start to lose brightness. If we said any more, we’d have to kill you and then ourselves. Probably.

The viewing angle issue was pretty much our only bone of contention with the second-gen Black Diamond screen, so if Screen Innovations has substantially improved that as it claims to have done, then we really could be onto a winner with the Zero Edge – especially given its new designer, lifestyle credentials.

As soon as we settle down to watch the Zero Edge (using a variety of projectors, but predominantly a high brightness, high end Sim2 Nero 2!) we’re reminded of just why the previous Black Diamond screen impressed us so much. For even with the lights in the test room turned on to maximum, the picture produced from the screen was not only perfectly watchable, but rather enjoyable. Pictures enjoyed far more colour response, brightness and even contrast than you would ever be able to even dream of getting from a ‘normal’ screen with any sort of ambient light around. 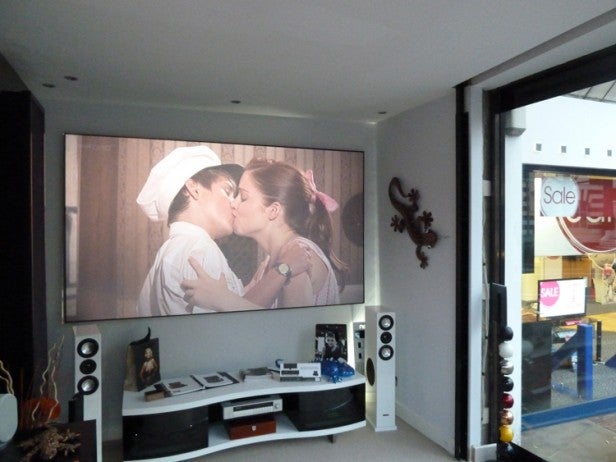 Dark scenes in particular almost seem to defy science in ambient light, so full are they of subtle detailing and accurate colour tones. We swear we’ve seen some projectors used in perfectly dark rooms not deliver dark scenes so convincingly.

Because pictures look so bright and contrast rich they’re able to really bring out the fine details in HD feeds, making them look extremely sharp even with the lights turned pretty much to full. Watching a projector on a normal screen in ambient light, by comparison, leaves the picture looking soft and listless.

Even positioning the projector so that a large window could expose the screen to daylight from the side (as shown in the photo above, taken at Lounge Lizards on The King’s Road in London), the picture still looked perfectly watchable. Not as bright and colourful as a huge plasma screen would, it has to be said, but good enough to enjoy – especially given the tens of thousands of pounds less the Zero Edge will have cost you.

The Black Diamond Zero Edge achieves this because, as noted earlier, it focusses much more of the light directly back towards you rather than doing as most projector screens do and scattering the reflected light far and wide around your room. And this has a rather cool knock-on effect too, for when we drew back our black-out curtains to reveal the white-painted wall behind them while testing the screen, we noted that there the walls exhibited hardly any of the ‘bounce back’ of light that we would expect to see when exposed to the light cast off from a typical screen.

This again is a huge benefit to a normal living situation in a typical house, as we haven’t come across many households who want to paint their walls the black or dark grey colours pretty much demanded by most normal projector screens.

Looking for more good things to say about the Zero Edge, it’s striking that even with your head practically squashed up to the screen it’s hard to make out the material’s physical structure, meaning the image looks pure and ‘smooth’ rather than ‘fabricy’. What’s more, the screen’s finish seems easily fine enough to support Screen Innovations’ claims that Black Diamond is more than capable of showing 4k sources when they finally appear.

Moving around the room during our tests, meanwhile, revealed that the Black Diamond Zero Edge certainly does deliver a quite substantial improvement in the viewing angles it can support without the picture starting to lose brightness or light balance.

It’s also worth saying that the Zero Edge is very forgiving of what sort of projector it’s ‘fed’; basically, it makes any projector you point at it look brighter and more dynamic. Though for the best results if you’ve got a really bright room, you should try and use a pretty bright projector.

The only reason we said ‘pretty’ bright back there rather than ‘crazily’ bright is that pumping too much light at the Black Diamond Zero Edge causes our only problem with the screen: a little hotspot of ‘gleaming’ or shimmering pixels.

During our tests this hotspot was around a foot square, and occurred towards the top centre of the image. A square foot might not sound large in the context of the screen’s overall size, but the gleaming noted with a high brightness projector output did draw our attention to the little hotspot area more than we’d have liked. 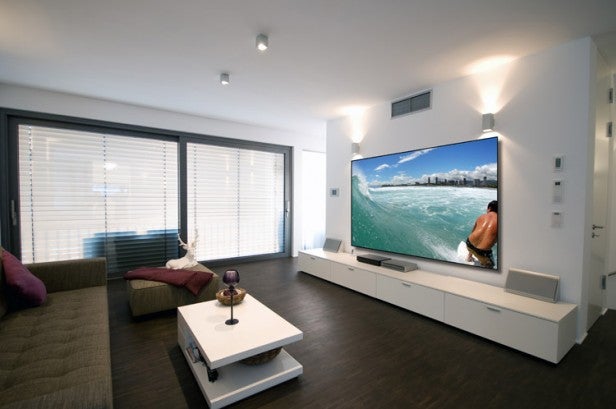 The good news, though, is that reining in the Sim2 projector from its brightest setting – which is, it must be said, extremely bright by home projector standards – reduced the hotspot to the point where it essentially disappeared.

We guess it’s a pity the screen has what appears to be a ‘maximum projected light’ limit before the hotspot kicks in. But in truth there aren’t actually all that many projectors able to get brightness outputs to rival that of the high-end Sim2, and none of the other more mainstream projectors we tried it with suffered the same hotspot flaw.

Most of our tests of the Black Diamond Zero Edge inevitably took place in a bright room. But since even the brightest of rooms can go dark at times, we also tested the screen in a blacked-out environment – and again it didn’t disappoint. In fact, it gives pictures an almost luminous feeling that actually reminded us a little of the experience of watching a quality digital 4k image on a commercial cinema projector. And you can’t say fairer than that.

The fact that light isn’t dispersed at all angles from the screen also means that the screen delivers a startlingly good contrast range even in white-walled rooms, with surprisingly inky blacks sitting alongside the luminous bright and colourful content noted a moment ago.

In fact, while the Black Diamond Zero Edge might have been designed with daylight use in mind, it really is also a cracking screen in the dark, meaning that cinephiles can get plenty of quality and value out of it as well as more casual users.

Verdict
The Black Diamond Zero Edge is a significant step forward from even the already considerable efforts of its 2010 iteration. Its reflective properties are better, especially when it comes to effective viewing angles, making it an even more flexible beast than it was previously. And its new borderless design both focusses your attention more on what your watching and massively reduces the impact the screen has on a typical living space.