If there’s one enduring problem with using a projector in a normal living room environment, it’s not being able to get the room dark enough. It just isn’t usually practical to have a main room of the house submerged into the total blackness that a satisfying home cinema viewing experience really demands.


This is especially true if you’re using a fairly cheap and cheerful screen or even – shudder – a matt white wall to play your projected images on. For such surfaces just don’t have the reflective properties to compete with even small amounts of ambient light, leaving the images that appear on their surfaces looking dull and lifeless.


You would fare slightly better with a high-gain screen (as in, a screen with material that ‘amplifies’ the light hitting it from your projector), or maybe at a push a wall painted in gloss white paint (shudders again). But such surfaces tend to cause other problems of their own, especially if the walls of your room are painted white or some other bright colour. For normal high-gain screens reflect their light across a wide dispersion pattern, causing the ceiling and walls of your room to be bathed in light to the extent that it can ironically create a whole new level of ambient light for the projector pictures to compete against! 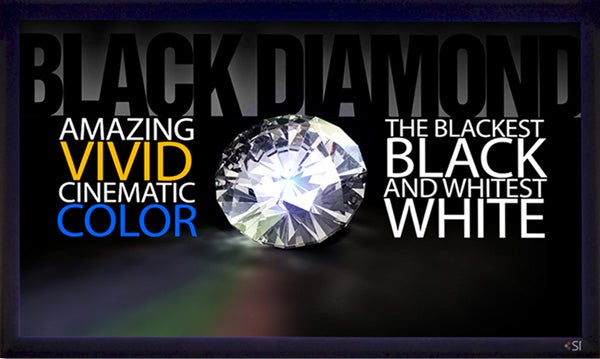 In short, we can understand why some mega rich types opt to spend £50k on a 100in plasma TV rather than fork out potentially vastly less money on a projector system that would give them the same screen size.


Or at least, we could understand this until we clapped our eyes on the Black Diamond II projection screen from Screen Innovations. For this remarkable bit of home cinema kit seemingly defies the laws of physics to deliver brightness and contrast-boosting reflective properties that rewrite the home cinema rulebook – for a tiny fraction of the cost of one of Panasonic’s 103in plasma screens.


Not that its revolutionary nature is immediately apparent, mind you. Basically, in the fixed frame arrangement we tested, the Black Diamond II just looks like any old projection screen. A motorised version is, we believe, going to be available very soon, and this might provide a more appropriately swanky setting for what’s actually a potentially game-changing projection technology.


Mind you, once you’ve clocked the bit of the Screen Innovations marketing blurb where it says the Black Diamond II can improve the contrast of your projector by as much as 300 per cent, then in some ways the sheer ordinariness of its design becomes extraordinary. Not least because it’s a soft, rollable screen, rather than the rigid glass-based high-reflectivity Planar XScreen Monaco screen we saw a few year’s back.


Screen Innovations doesn’t want us giving away its trade secrets by going into precise details of just how it’s managed to get a flexible projection fabric to deliver the exceptional levels of brightness and focus we’re going to describe in more detail later. But we are allowed to state that the non-polarising fabric comprises no less than seven optical laminations, including, most importantly, a proprietary reflective layer system.

The intention behind all this effort was to make a screen that’s much more focussed in the way it reflects light. In other words, rather than scattering light all over the place, like a typical projection surface does, the Black Diamond II’s optical properties ensure that the light comes back towards you from the screen in an exceptionally focussed way.


What’s more, it manages this considerable feat without generating seemingly any ‘hotspots’, where one part of the image looks brighter than the rest.


The screen is also available with either 1.4 or 0.8 gains, with the former working best if you really have a lot of ambient light to contend with, but the 0.8 version likely to produce more neutral and thus cinematic results in rooms where ambient light levels can be well controlled. It’s the 0.8 gain screen that we’re looking at for this review. 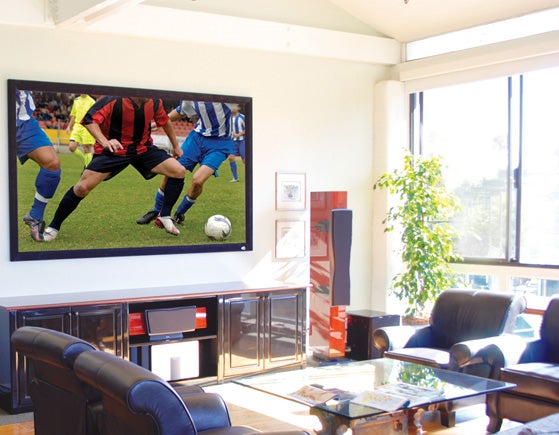 With so many high quality displays around these days, it takes a lot to completely blow us away. But our first glimpse of the Black Diamond II in action really was one of those ‘Eureka’ moments. For the way the picture from a selection of resident projectors – including some seriously cheap ones – positively explodes off the Black Diamond II is nothing short of revelatory.


There are two reasons for this. First, the sheer reflective prowess of the fabric seems to amplify the light arriving from the projector, rather than soaking it up. Second and more importantly/remarkably, the Black Diamond II’s structure, as billed, ensures that practically none of the light from the projector gets scattered willy nilly around your room, to bounce of side walls and ceilings and thus reduce perceived contrast. Instead, it’s focussed right back at you with maximum intensity.


This focussing aspect of the Black Diamond II also has the effect of keeping your attention riveted more fully on the screen and therefore the film or game you’re watching, since you’re less aware of the environment around the screen.


As if the Black Diamond II’s ‘how does it do that?’ thrills weren’t already persuasive enough, we were also startled by how much extra shadow detail we were able to see in dark areas of the picture; how contrast-rich images appear compared with how they look on our standard £900 Vutec screen; and how natural colours look, despite – or maybe because of – the extra brightness that’s driving them.


It should also be stressed that the extra brightness and punch the Black Diamond II adds to your projection pictures doesn’t come at the expense of black level response. On the contrary, the screen’s ability to reduce light ‘spillage’ around the room makes black colours look richer and deeper than they do on normal screens.

The final feather in the Black Diamond II’s cap is its flexibility in terms of the projectors it can work with. We tried it with five different models ranging in price from £900 to £26,000 (!), and in every case it radically improved the perceived performance compared with our reference screen.


Tellingly, its impact relative to normal screens was at its most startling when we tried it out in a fair degree of ambient light and/or in a room with very light and thus potentially reflective walls. Here it really did manage to retain a level of punch to the image that wouldn’t look out of place on a massive plasma TV. But it also still delivers marked improvements in fully darkened rooms – particularly if the dark room has light-painted walls.


So far, so very good. But before you all start wondering why anyone would want to buy any other screen, there are a few problems to report. 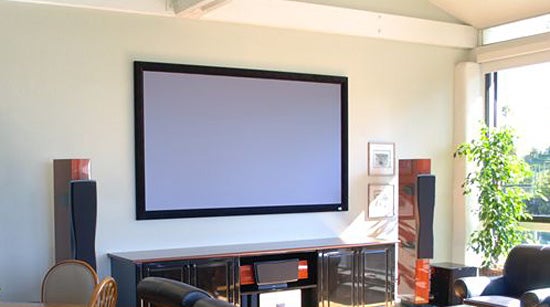 The most important of these concerns viewing angle. For the technology the screen uses to focus the light straight back out of the screen means that the image can lose brightness if viewed from more than around 40 degrees to the left or right, or as little as 20 degrees above or below. What’s more, the level of the brightness reduction you’ll see isn’t consistent across the screen once you view from beyond the above tolerances, leading to a distractingly uneven look to the picture.


People wanting to hide a centre speaker behind the Black Diamond II should also note that it’s not acoustically transparent. In other words, it’s not perforated so that sound can pass through it easily. In fact, its multilayered nature arguably makes it more of a blockage to sound than most normal screens, so your centre speaker will likely have to sit above or below it instead.


We also occasionally detected a marginal shimmering effect on the surface of very bright image elements when using powerful projectors – though we really wouldn’t deem this significant in the context of the positives the Black Diamond II can bring to a typical non-specialist home cinema setup.


One final little issue we noted was that in adding intensity to pictures, the Black Diamond II slightly emphasises the impact of single-chip DLP projector’s rainbow effect (where you see stripes of red, green and blue in your peripheral vision or over bright image elements). This makes it perhaps a better friend of LED, three-chip DLP, LCD, SXRD and D-ILA models than budget DLP ones. That said, there are now a number of single-chip DLP models out there that really do keep a tight lid on rainbowing and so should work absolutely fine with the Black Diamond II.


Provided its caveats – especially the viewing angle one – don’t impact your particular viewing setup, the Black Diamond II can deliver what for many normal home cinema enthusiasts might be considered the Holy Grail: namely mammoth, good quality pictures that can be watched in a degree of ambient light for a price that’s a tiny fraction of what you’d have to stump up for a 70in or bigger plasma or LCD TV.