What is the Samsung M3?

The WAM350 – or M3 to its friends – is Samsung’s entry-level multiroom audio speaker, joining the £200 M5 and £280 M7 in the range. It’s the smallest and most affordable of the trio, but comes equipped with all the features that made the M7 such a success, with the exception of NFC.

The M3 can be used as a standalone speaker and will play music via Bluetooth or a network connection via 2.4 / 5 dual-band Wi-Fi or Ethernet. But if you invest in Samsung’s £50 WAM250 hub you can use several M3s in a multiroom music system, all controlled from Samsung’s Multiroom smartphone app. 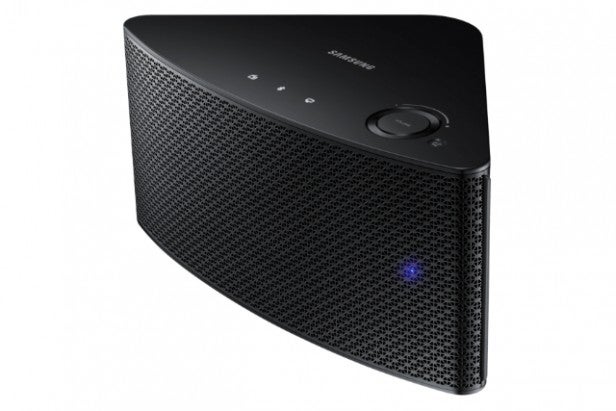 The M3 is a more compact version of the M7 and M5, and shares their eye-catching wedge design, which is meant to look like a play button. The shape enables it to be placed horizontally or vertically – there’s a stand in the box for the latter. Vertical mounting is more suitable if you’re using a pair of M3s as
stereo speakers. Cleverly, built-in sensors detect when it’s been placed
vertically and switch to mono mode. 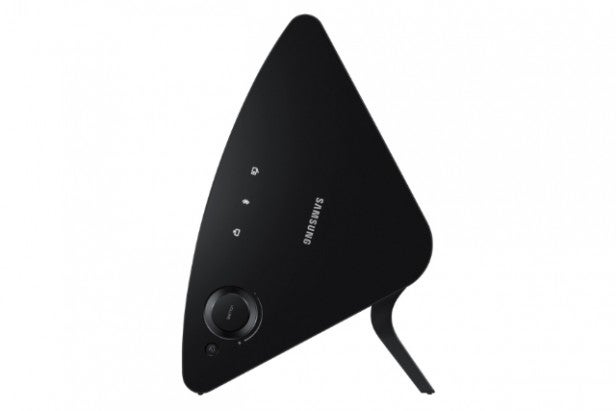 The top panel boasts a stunning gloss-black finish that we instantly covered in fingerprints, while a black grille covers the front and sides, and can’t be removed. It’s also available in white as the WAM351, if you want something a little more disco. 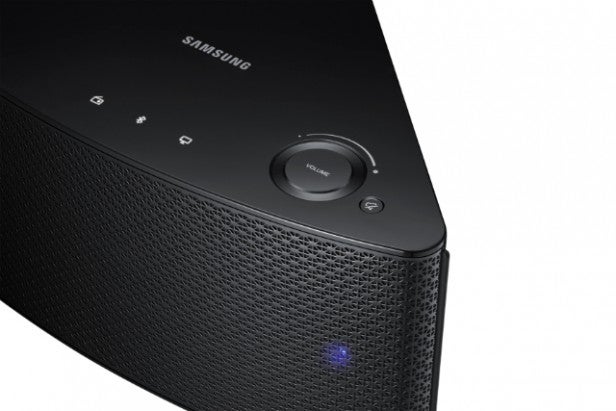 Touch-sensitive controls are found on the top panel, including a responsive volume dial and buttons for internet radio presets, Bluetooth and TV SoundConnect, which lets you play audio from a compatible Samsung TV. The lack of a power button is a bit confusing, but holding down the Mute button puts the unit into sleep mode. On the front is an LED that glows blue when pairing is successful, or red if it’s failed. 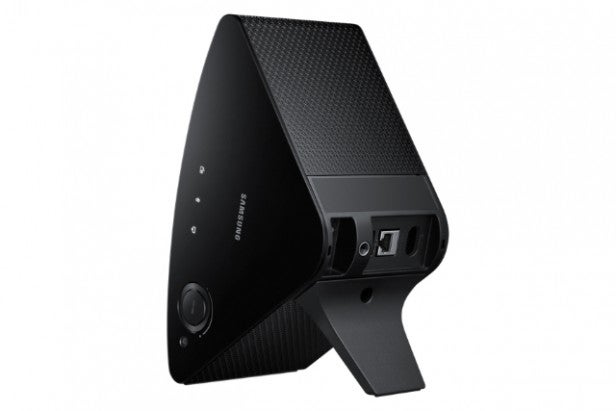 Rear connections include an Ethernet port for connecting directly to a router and a USB port for software updates, but it’s a shame there are no inputs for non-wireless devices. There are two buttons – a SPK ADD button to pair the M3 with a Hub and a WPS button to connect it to a Wi-Fi router without a Hub – plus a threaded fixing point for wall mounting.

The Hub itself is a small, unobtrusive black box that connects to your router via Ethernet. On the front is a row of lights that indicate power, Wi-Fi and Ethernet connection status, while another icon lights up when the Hub is being used as a repeater to expand Wi-Fi coverage in a network with another Hub.

On the back are two Ethernet ports, which allow it to be used as a switch. There’s an SPK ADD button that you’ll need to press when adding a new M3 to the system, plus a reset button and USB port for service use.

And when playing your own files, format support is excellent – the M3 plays MP3, WMA, AAC and OGG, plus FLAC, ALAC, AIFF and WAV up to the 192kHz/24-bit standards of Hi-Res Audio. 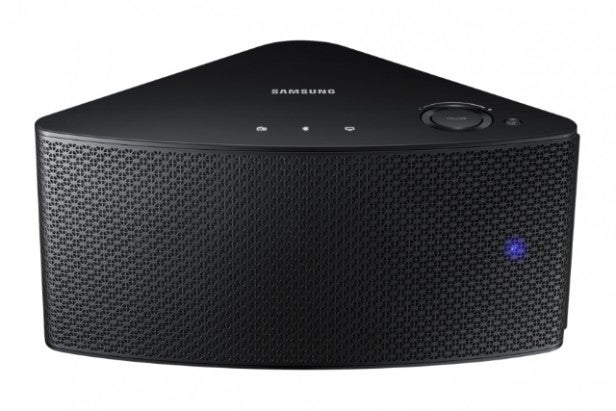 In terms of drivers, the M3 uses an 85mm woofer and 25mm tweeter for each of the left and right channels. It’s also worth noting that you can incorporate other Samsung home entertainment devices like the BD-H6500 Blu-ray deck into your multiroom system, or use up to four M3s to create a multichannel home cinema system. It’s remarkably flexible.

Don’t be intimidated by all this talk of multiroom, networks and hubs – the M3 is an absolute breeze to set up and operate, whether you have one speaker or four. There’s a real plug ’n’ play feel when you start rigging everything up, and much of the process happens automatically.

You can easily stream music to a single M3 via Bluetooth – just hit the Bluetooth button on the top panel and pair your device. Or you can connect it to a router using the WPS button or a LAN cable.

But the M3 is at its best in a multiroom environment. Zapping music to different rooms via Samsung’s Multiroom app (more on that later) is not only easy but also heaps of fun. We were sent two M3s with a Hub and had no problems installing them. We tried out various configurations – in a stereo pair and in different rooms – and it was plain sailing all the way.

To set up a multiroom system, simply connect the Hub to your Wi-Fi router via Ethernet and wait for all the lights to stop flashing.

Then plug each M3 into the mains in its desired location and the blue LED will start flashing. The light turns solid blue when the speaker connects to the Hub and it gives a pleasing chime. If for any reason the M3 drops out you can hit the SPK ADD buttons on the Hub and speaker to reconnect them.

The M3 is controlled by Samsung’s superb Multiroom app for Android and iOS, which we ran on a Samsung Galaxy Note 3. Its simple layout and funky graphics make it a doddle to use, plus it’s remarkably flexible, providing solutions for every speaker configuration. The app can be used with a single M3, not just for multiroom use. 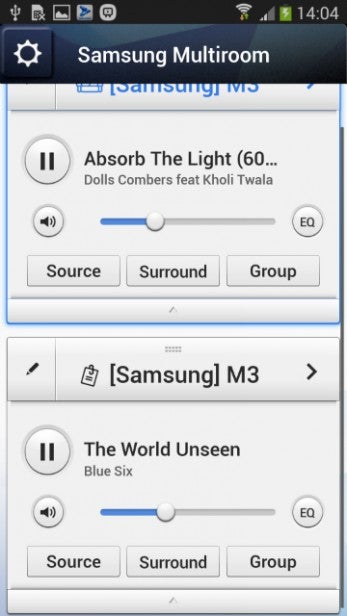 Fire up the app and it finds all of your connected speakers, displaying each device in its own panel. These panels can be expanded to reveal the track that’s currently playing, alongside a trio of buttons – Source, Surround and Group. You can also rename speakers and identify each one by room it’s in.

Hit the Source button under your desired speaker and you can select where you want it to pull music from – Wi-Fi, TV SoundConnect or Bluetooth. 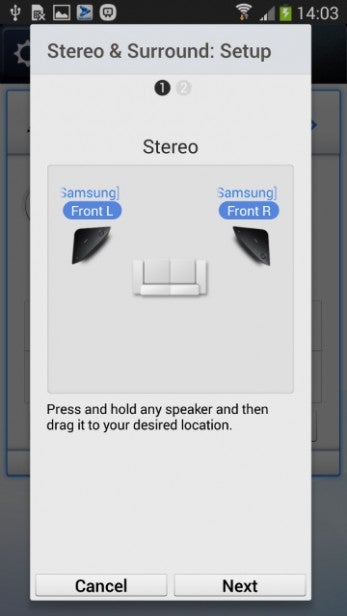 The Surround button allows you to arrange your speakers in a stereo or surround sound setup – a helpful graphic lets you drag each speaker to the required position in the room. We dragged our second M3 to the front right position to create a stereo pair and a female voice said “front right” to confirm our choice. After that, you can then run a test tone to check the volume of each channel. In stereo or surround mode, each speaker plays in mono. 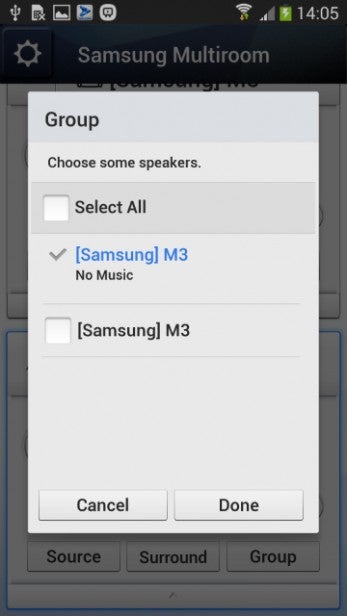 The Group button allows you to play the same music on each speaker around the house. Simply check the boxes next to the speakers you want to group together and you can start piping music around the house from any source. 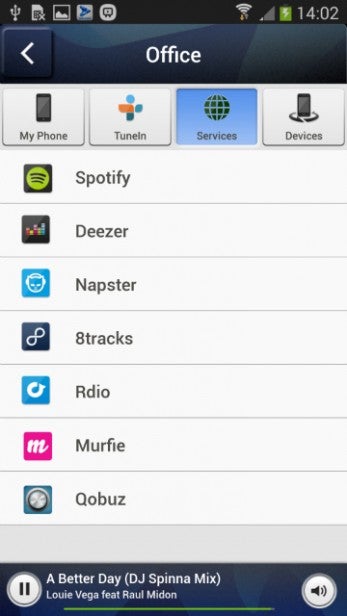 Select ‘My Phone’ and local songs are listed below by track, playlist, album and so forth. Hold your finger on a track and you can add it to a playlist or play it instantly on any speaker.

The TuneIn menu allows you to search for stations by keyword or access your favourites. In the Services section, just tap your preferred music app in the list and start streaming – but bear in mind you’ll need a premium subscription to use Spotify. 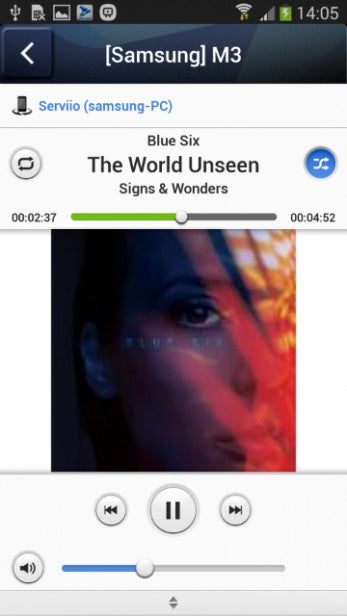 The Devices menu lists all connected DLNA servers – just select one and follow the folder sequence to find your music. When a track is playing, it displays available cover art alongside metadata and playback controls. Drag your finger up from the bottom of the screen and you can view the rest of the current playlist.

The M3 may be small but it musters a big, beefy sound that effortlessly fills the room. Its weighty bass output is impressive given the limited cabinet size – we let it rip with a playlist of dance tunes underpinned by incessant 4×4 house beats, and the M3 delivers their rhythms with energy and punch.

The M3’s naturally warm sound can make tracks with heavy basslines seem too rich, muddy even, but because they’re so smoothly integrated you get a tight, cohesive sound at all times. 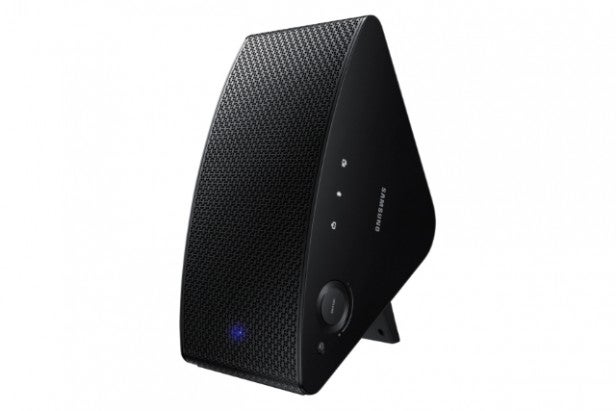 It’s balanced out with a clear midrange and sparkling high frequencies, with none of the brightness or brashness that typify Samsung’s soundbars.

The M3 digs out lots of detail and conveys voices with terrific clarity, resulting in a very polished, palatable sound. It’s exciting and dynamic when the material demands it, but laid back, mellifluous music is equally absorbing.

That continues when you crank up the volume. There’s a level of composure at play here that we didn’t expect from such a compact and affordable speaker.

The size of the sound improves tenfold when you use two vertical M3s in a stereo pair. They offer a powerful, expansive wall of sound with vastly superior stereo separation to a single M3. 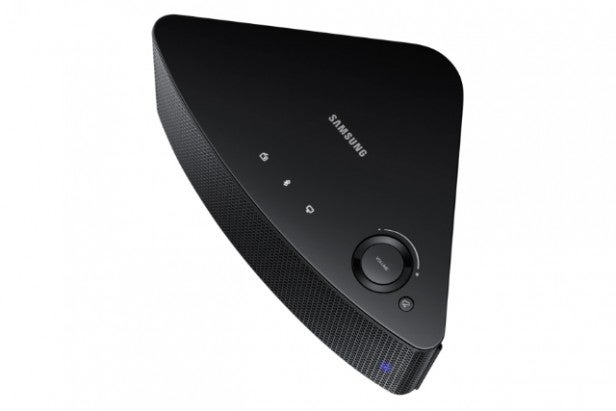 Should I buy the Samsung M3?

The M3 is hard to fault. It boasts a killer combination of features, design and functionality for a much lower price than the impressive M7, which makes it a must-buy in our book. Its obvious competition is Sonos, whose excellent Play 1 speaker sells for a similar price, but we think the M3 is a worthy challenger.

Whether you’re using a single speaker or several, Samsung’s brilliant Multiroom app is easy to use and lots of fun, taking all the hassle out of audio streaming. It pulls music from a wide range of sources, too, including DLNA, Bluetooth, web radio and online, and does so without any fuss.

But most importantly the M3 is a superb performer, offering a surprisingly big and detailed sound for such a small speaker.

Samsung’s multi-talented multiroom speaker makes a mockery of its price tag with a packed feature list, a slick smartphone app and fabulous sound quality. Wireless audio has never been so simple.