The Samsung WAM750, or M7 for short, is a wireless speaker that streams music from a variety of sources but its key feature is its multiroom capability. With M7s dotted around the house, you can send music to different rooms using a smartphone or tablet running Samsung’s Multiroom app. The M7 is one of two speakers in the range, alongside the £259 WAM550 (M5).

With these speakers, Samsung is taking on the might of Sonos, universally considered the benchmark for intuitive multiroom music streaming. But it’s not the only company jumping on the multiroom bandwagon – Panasonic recently announced a multiroom system based around Qualcomm’s AllPlay media platform, while LG unveiled the NP8740 speaker at CES.

It’s a potentially lucrative move, given the success of Sonos and the clamour for multiroom music in general, but a brave one too – Sonos has a 10-year head start and its Play:3 and Play:5 are probably the best multiroom streaming solutions on the market. So with that in mind, let’s find out how Samsung’s effort fares… 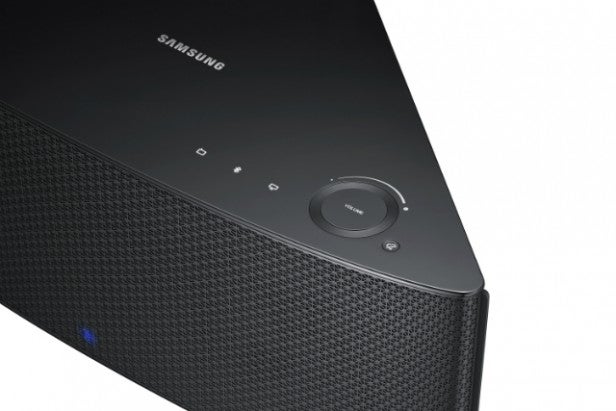 The M7 is known as the Samsung Shape M7 in the States and it’s a fitting moniker. Its highly distinctive triangular design is supposed to look like a play button and it works a treat.

The curved front panel and rounded corners lend a touch of elegance, while the glossy top panel looks swanky and stylish. It is fairly chunky, but not imposingly so. From the front, only the large netted front panel and small blue LED are visible, which gives it a minimal and surprisingly esoteric appearance. There’s a choice of colours too, if you count black and white as such.

This lack of front clutter, coupled with the absence of a remote control, makes the M7 rather mysterious at first, but everything is controlled by an Android or iOS device running Samsung’s Multiroom App (more on that later). 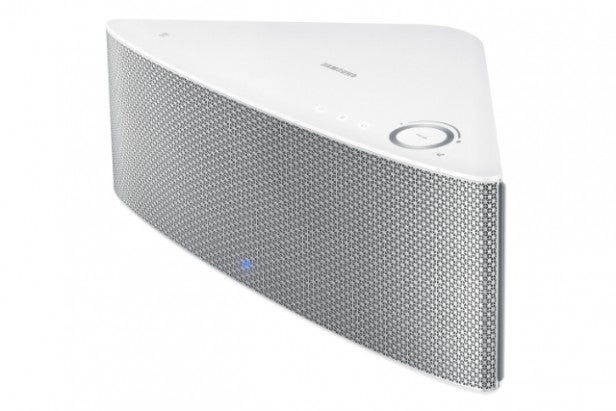 However, there are a few controls on top, including a clever touch-sensitive volume dial. There’s a little radio icon too, which comes in handy for toggling through internet radio presets. The NFC icon is conveniently placed and easy to spot.

The lack of a physical on/off button might trouble eco-warriors but don’t worry – the unit automatically goes into standby when no signal is received.

Like the Sonos speakers, the M7 can be installed vertically or horizontally. The vertical option, using the clip-on foot stand, leaves a smaller footprint than horizontal mounting and could be useful if space is tight. A built-in sensor detects when it’s positioned vertically and switches to mono mode. Rubber feet are fixed to the bottom sides, protecting it from scratches and vibration. 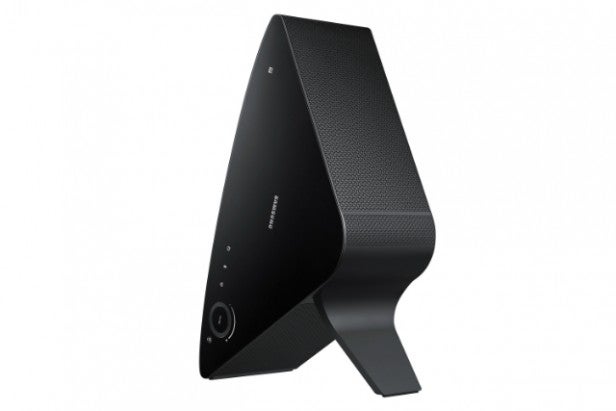 Build quality is impressive, with a weighty, solid enclosure. The speaker mesh and top panel have a plasticky feel, which pales in comparison with the luxurious lacquer finish of the Samsung DA-E750 or the rubberised Sonos Play:3, but it’s just about commensurate with the price.

To use the M7 in a multiroom system, you’ll need the separate WAM250 Hub (which will set you back £50). This little black box connects to your router and acts as a bridge between the various speakers. There’s a row of lights on the front indicating its status.

You can connect the M7 directly to your router via built-in Wi-Fi (something you can’t do on Sonos’ system) or Ethernet, but it’s a tricky process – the hub makes life much easier. Two clearly-labelled buttons on the back (Speaker Add and WPS Wi-Fi Setup) make the whole wireless setup process easier – the former helping you pair new speakers as you expand your system.

Given the wireless focus rear connections are limited, but there is a 3.5mm minijack for rigging up non-wireless devices.

These buttons and connections are hidden by a plastic cover with holes to pass the cables through. It’s slightly fiddly but makes everything nice and tidy.

Next
Features, Setup and App Review