Inevitably we couldn’t
resist starting our tests with HDR UHD, delivered in the form of
showreels of HDR masters of The Life Of Pi and Exodus. And we might as
well get straight to the point and say that the images are simply
incredible – the best we’ve ever seen on a domestic television, in fact.
There are a number of reasons for this.

First, the sense of
contrast is incredible. The blisteringly bright and pure peak whites and
gorgeously deep blacks – can this really be an LCD TV?! – catch the eye
first, especially with extremely contrast-rich content such as The Life
of Pi’s night sequences. No other screen we’ve tested has delivered
anywhere near such extremes of light and dark before. And we include in
this statement even the greatest plasma TVs.

While the light and
dark extremes are the most immediately impactful thing about the HDR
images, though, the real star of the show for picture enthusiasts is
what you can see between those extremes. The gorgeous subtleties of all
the seemingly infinite luminance levels and colour tones between pure
black and white; the incredibly intensity with which bright elements in
dark images really pop out of the gorgeously natural blackness around
them; the stunning intensity and, crucially, naturalism of the colours
at all levels of luminance within the image… We’ve just never tested
anything like it before. 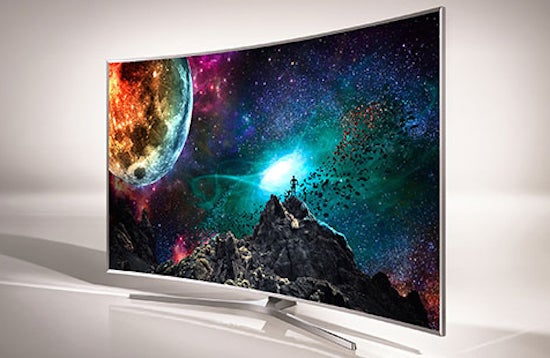 The
point about the colours is worth reiterating. It’s really not just
their spectacular, brightness-driven vibrancy that blows you away; the
combination of the vast amounts of colour processing in the TV and the
new Nanocrystal technology delivers unprecedented subtlety
across the entirety of the vast colour palette. This gives a stunningly
filmic look to images that we haven’t experienced before.

It’s
noticeable, too, how the incredibly fine distinctions between colour
tones do a great job of maximising the potential detail in native UHD
sources.

Plasma and OLED have both previously managed to impress
greatly with their black levels and contrast, of course, but never
before has this been connected with so much brightness. Brightness is
something that weaknesses in flat TV technologies has previously led us
to be suspicious of, but the UE65JS9500 has made us realise almost for
the first time just how important it is to a truly spectacular TV image.

We
had been concerned that LCD TV panels might not be able to cope with
the brightness demands of HDR, leading to backlight clouding problems
and shallow, greyed-over black colours. But as you’ve hopefully realised
from what’s been said already, nothing could be further from the truth
with this Samsung trailblazer.

Blacks look remarkably, inkily
black, and even more surprisingly, when the TV’s incredibly punchy
whites are appearing against black backdrops there isn’t nearly as much
haloing and light clouding around the bright objects as we had feared,
at least from a sensible viewing angle. The amounts of shadow detail in
the dark parts of the image are also magnificent, making dark scenes
look even more deep and natural.

The UE65JS9500 uses a
combination of a direct LED lighting system with local dimming to
deliver its extraordinary contrast; it’ll be intriguing to see how well
the edge LED lighting systems that kick in further down Samsung’s range
cope with HDR’s demands. But for now all we can do is marvel at the
incredible spectacle the UE65JS9500 delivers.

Another interesting
effect of a true HDR experience is that it strangely made us feel more
aware of the image as a whole. Weaknesses with normal TV technology tend
to make them use subtle techniques to focus you in on the
highlight/most important parts of the image, as they don’t have the
ability to render every part of the image equally effectively. With the
HDR screen here, though, there’s enough brightness, colour richness and
processing power to simultaneously produce every part of the image with
equal intensity, precision and focus, resulting in a more balanced
all-round image, more like the sort of immersive experience you get at
the cinema.

The combination of extreme sharpness and contrast
join with the curved screen in helping HDR pictures look like they’ve
got more depth of field than normal – almost 3D without the glasses. The
latest depth-enhancement processing engine appears to be helping this
impression by eking even more impact of the image’s localised contrast
differences. 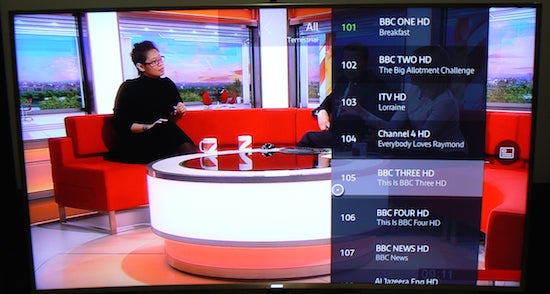 We
were struck, too, by how much more accurately the new depth-enhancement
feature delivers its relative sense of depth across the screen. In
other words, it’s not just the centre of the image that seems to be the
deepest. If the deepest part of a shot is off to the left or right,
that’s where the extra depth really seems to be. This is clever stuff
given the curved shape of the screen, and actually overcomes one of my
usual issues with curved screen technology.

A combination of
apparently improved screen filtering and the higher brightness of the
pictures also reduces my previous concerns about distorted reflections
on the curved screen. Yes, bright light sources are still stretched
across more of the image than they would be on a flat TV, but the
intensity and range of the reflection is reduced greatly from last year.
So much so that if you darken your room for movie viewing you may
scarcely notice the problem at all.

Irresistible though HDR is,
it’s unfortunately a simple fact that there’s not going to be much of it
around for a while – though as well as Netflix, HDR is mercifully
confirmed as being supported by the upcoming UHD Blu-ray format. So how
does the UE65JS9500 fare when it comes to upgrading non-HDR content?

To
find out we compared the native HDR Life of Pi footage with a non-HDR
UHD version of the film on Samsung’s 2014 UHD Video Pack – and the
results were startling.

Compared with the HDR content the non-HDR
version looks considerably more muted with its colours; less dynamic
with its contrast range; less full of detail, especially in dark areas;
and less subtly colour toned in dark areas. The difference isn’t night
and day, but it’s certainly dusk and day. So it’s clear at this point
that getting a full HDR experience does require an HDR source.

However…
It’s critical that we stress that comparing the “upscaled to HDR” Life
Of Pi UHD transfer with the same transfer on a non-HDR UHD TV shows that
the UE65JS9500’s HDR upscaling delivers much brighter, much punchier,
much more vibrantly coloured, much richer in contrast, and sharper
images than you get with the non-HDR TV. In other words, while native
HDR content is a truly generational leap, even the upscaled images are a
gorgeous progression from those you get with any previous screen
generation. 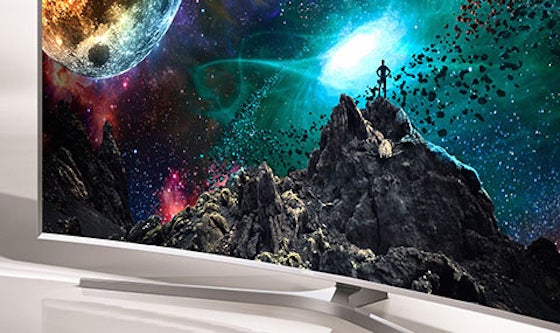 As
noted previously, some purists may take offence at the idea of
Samsung’s new TV brazenly “souping up” non-HDR images from the original
colour format they were mastered in. Personally, though, we felt that
Samsung’s upscaling engine converts non-HDR to HDR so well that we never
felt like reverting to the TV’s Rec 709 setting. Colours still look
predominantly balanced and believable post HDR revamp, but with a much
more engaging and enjoyable dynamism, while the extra contrast range is
just mouthwatering.

One last element of the UE65JS9500’s
performance we should look at is its UHD upscaling. This was good last
year – though in the final analysis it was probably pipped by that of
Sony’s top-end 4K TVs. But Samsung has noticeably improved things for
its HDR debutante, with the latest version proving much more effective
at suppressing noise without losing the natural sense of grain an image
might possess. There’s also almost no sign this year of the
over-stressed edges, bluish ringing noise and moire interference over
fine details that have been issues with previous Samsung UHD TVs.

While
the UE65JS9500’s pictures are overall nothing short of spell-binding,
delivering a huge leap forward for TV technology in general, we did
manage to find a set of small issues Samsung could work on for the
future.

First, we sometimes felt a little more aware of noise
when watching HDR images than we did with non-HDR sources – though this
was dealt with pretty handily by taking down the backlight and contrast
settings further than suggested in the Setup section. But then it makes
sense that HDR might naturally be quite unforgiving of any noise in a
source – so it’s handy that HDR looks set to be partnered with high-quality UHD content creation.

Next, while the Standard preset is
surprisingly effective by Samsung standards, the other three aren’t.
Dynamic makes images look strained and pushes white so hard it can hurt.
Natural tends to push the contrast to such extremes that dark areas in
particular can start to look anything but natural. And the Movie mode
uses a level of colour temperature warmth which interestingly doesn’t
sit comfortably with the  expanded colour palette of Samsung’s new
HDR-capable panel.

Samsung’s motion processing could still be
improved too, we feel. There’s a little judder without any motion
processing in play – especially during 3D viewing – and while the motion
processing can fix this, it’s difficult to find a setting which
delivers an absolutely perfect balance between motion clarity and
unwanted processing side effects.

Occasionally when watching
non-native HDR content very bright areas can look just a touch bleached
and short of detail, and finally the screen didn’t respond especially
well to having its backlight reduced heavily, with shadow details
starting to get crushed out. We can’t imagine many people wanting to
radically reduce the backlight to be honest, but maybe Samsung could
slightly tweak its algorithms to “balance out” the contrast a little
more at lower brightness levels.

Used as the main TV for the review period
Tested for more than a week
Tested using industry calibrated tools, discs and with real world use
Tested with broadcast content (HD/SD), video streams and demo discs
Previous
Samsung UE65JS9500 Review Next
3D, Sound and Verdict Review