This is mostly another huge
success story for the UE65JS9500. Its intense brightness and contrast
make for a phenomenal 3D performance – especially when you’ve added the
curved screen, outstanding UHD upscaling and depth enhancement into the
mix. It was a huge relief, too, to find images suffering only very
slightly with crosstalk – something we’d feared might be quite a severe
problem with such a high-brightness screen.

In fact, in many ways
the UE65JS9500 delivers the best all-round 3D performance we’ve seen
from a TV. The only issues are that there’s some slight judder and that
the upscaled 3D images perhaps don’t look quite as detailed as they did
on last year’s UHD TVs. This latter point is very minor, though.

The
UE65JS9500’s sound is good rather than great. The main strengths are
extremely good handling of treble details, which sound clean and clear
without becoming harsh; effects that are placed accurately in the
soundstage; impressive width and height to this soundstage; and vocals
which remain impressively clean and well-rounded even when put under
pressure by the rest of a soundtrack.

It’s true, too, that bass
sounds fuller and deeper than usual for Samsung – though it sometimes
seems a little dislocated from the rest of the mix, and can lead to some
slight phutting distortion when pushed really hard by a particularly
bass-heavy movie soundtrack. 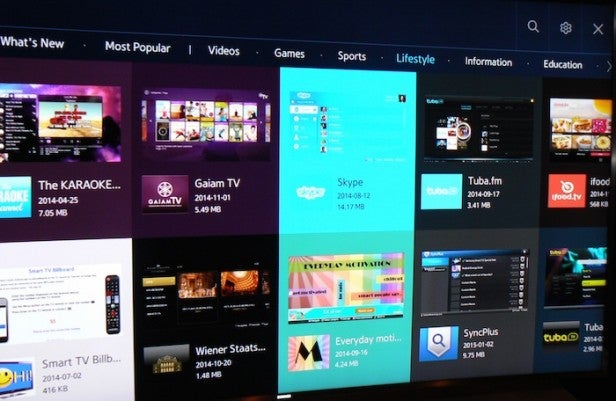 Other
issues are that the set can’t hit the sort of really high volumes a
neighbourless user might desire to accompany a serious film session, and
that the sound generally lacks a little attack and directness.

The
UE65JS9500’s sound is still not as good, then, as the best of Samsung’s
rivals. But it’s certainly not something you’ll necessarily feel the
need to upgrade with a separate audio system, and nor does it detract
from the set’s huge appeal in other areas.

Samsung
has completely redesigned its ‘smart’ remote control option for 2015
based on extensive consumer research – and it’s very much a redesign for
the better.

For starters it feels beautiful in the hand –
nicely balanced, slim, but heavy and well built. Its buttons feel
pleasantly responsive, and they’re much better laid out. Separating out
the point-and-click button from the more normal left, right, up and down
navigation buttons is particularly welcome, and we didn’t find
ourselves missing the old touch pad element at all. The new approach is
much less fiddly, much more intuitive, and crucially it allows users a
clear decision over how they want to navigate their TV’s menus.

The
deliberately limited array of buttons included is mostly well judged
too, and the synchronisation between the remote and the menus is much
improved.

My
only serious issue with the remote is the way the onscreen cursor you
use with the point-and-click control option always pops up at the same
point on the screen it was at when you last finished using it, rather
than appearing at the part of the screen where you’re actually pointing
the remote. This can feel confusing and counter-intuitive.

If
you’re wanting to indulge in some big-screen gaming action on the
UE65JS9500 we have yet more good news. For we’ve measured its input lag at just 20ms on average when using the screen’s Game picture setting – a figure that’s exceptionally low for the TV world and one that shouldn’t be significantly detrimental to your gaming skills. NOTE: When we first published this review we reported an input lag figure of around 65ms. We retested the set following an update from Samsung and recorded the new, much superior figure.

If
you want to secure yourself the best picture quality we’ve seen from a
TV to date, than you certainly should buy a UE65JS9500. Its HDR-driven
images are unlike anything we’ve ever seen before, with native HDR
delivering an impact that’s nothing short of astonishing – far more
aggressively obvious, in fact, than the step up from HD to UHD.

Obviously
there’s a pretty obvious frustration here in that there’s currently no
native HDR content with which to exploit the full potential of the TV –
and actually there’s still not much native UHD content around either!
But HDR and UHD really are both coming this year, and the UA65JS9500 is
spectacularly well equipped to deal with it. It crucially also does an
amazing job of boosting non-HDR content.

There is, though, one
other barrier to entry: the UE65JS9500’s price. It’s expected to cost
just a penny shy of £6000, meaning it’s very far indeed from being a
mainstream proposition. The set does a heck of a job of justifying that
price, but clearly there will be many people out there without
bottomless bank accounts who’ll be very keen indeed to see how Samsung’s
step-down JS8500 HDR models shape up.

Thanks
to its HDR support, the UE65JS9500 delivers the biggest leap forward in
picture quality we’ve seen for years. Truly next-generation stuff that,
once experienced, feels almost painful to be without.