Once again we’re very much in ‘wow’ territory with the UE65JS9000’s 3D performance.

For
starters detail levels from 3D Blu-rays are immense, thanks to the way
Samsung’s set upscales – brilliantly – the source HD images to UHD. The
extra detail and pixel density on show works wonders when it comes to
making the 3D worlds on show feel more solid and tangible – especially
as Samsung is now so much cleverer about the way the upscaling works, so
that there’s no over-stressing of things like source grain or sharply
contrasted edges.

Talking
of contrast, the UE65JS9000’s immense dynamic range delivers a huge
gamut of luminance levels and colour tones with 3D content that has a
spectacular effect on the way the screen is able to create a sense of
depth and solidity in the 3D frame. 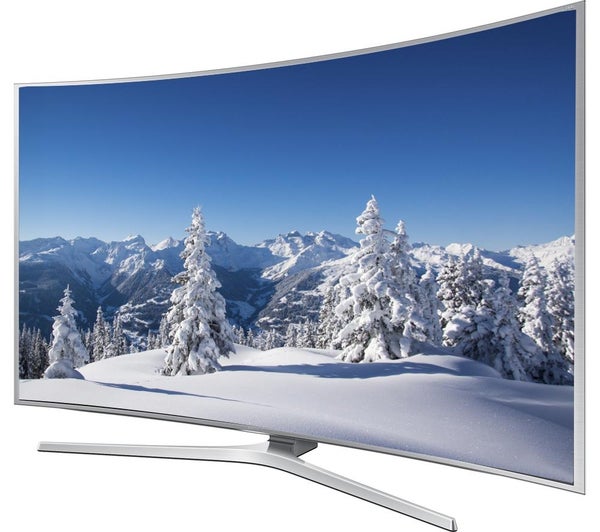 The
brightness at the UE65JS9000’s heart also helps propel the images off
the screen in a much more satisfyingly aggressive and intense way than
you often get with active 3D technology, and the improvements with
motion handling we noted in the 2D picture section are if anything even
more palpable in 3D, which now looks beautifully natural rather than
either judder or processed as it did on the UE65JS9500 sample we had. As
we mentioned before, this is likely down to improvements in Samsung’s
latest firmware, so it could well be that the UE65JS9500 now enjoys
improved motion too. We’ve just received a UE78JS9500, so we’ll check
this out for ourselves while reviewing that model.

It’s also
great to find that despite the brightness of its 3D images the
UE65JS9000 does a good job of suppressing the double ghosting noise
known as crosstalk. It’s not completely absent, but its appearances are
rare and subtle enough not to detract in any major way from the overall
mesmerising 3D effect.

A much bigger distraction, actually, is
the backlight clouding problem. The 3D preset on our test model
defaulted to a situation where the backlight was set to its maximum
output while the Smart LED (local dimming) feature was switched off.
This resulted in gross amounts of backlight clouding impacting dark 3D
scenes, with the 3D effect actually emphasising the clouding as it
appears to lie across the surface of the image like reflected moonlight
on a pond.

Fortunately, ramping down the backlight to its 14 or
15 level and activating the Smart LED feature hugely reduces the
clouding problem – though obviously at the expense of a chunk of the
brightness you can enjoy with 3D on the UE65JS9500.

The
UE65JS9000 is a decent rather than spectacular audio performer.
Considering it only carries a down-firing speaker system it does a good
job of making sound appear locked to the correct parts of the screen,
and delivers a decently large-scale soundstage. It has a better crack at
underpinning the soundstage with bass than most down-firing speaker
systems too, and dialogue is generally clear and authentic sounding. 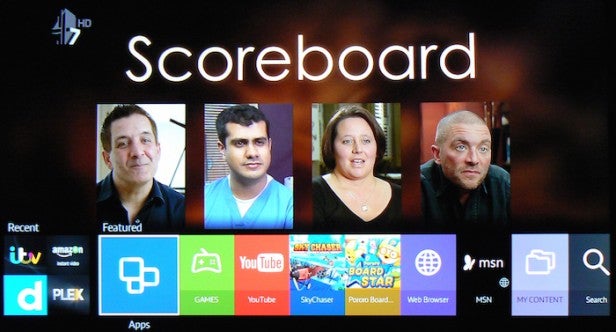 There’s
a lack of detail in the treble register versus the best-sounding TVs,
though, and the bass register can start to sound congested and
overwhelmed when the going gets tough. Also the sound lacks that sense
of attack you get with front-firing speaker systems.

The
UE65JS9000 is a stunning screen for gaming. For as well as injecting
gorgeous life into video game graphics with its intense brightness,
contrast and colour punch, with most of its picture processing turned
off we measured input lag (the time it takes for a screen to render
incoming image data) at only a fraction over 20ms. This is an excellent
result for a UHD TV, and should have only minimal impact on your gaming
abilities.

One
other thing worth mentioning here is the new Smart TV remote control
Samsung ships with the UE65JS9000. It’s a huge improvement over last
year’s effort, providing more physical separation between the different
point and click and button navigation control options, and doing away
with the fiddly touch pad entirely. The streamlined button count is
mostly welcome too.

No
other brand has HDR-capable TVs due imminently, and even when they do
appear we suspect they’re going to struggle to rival the quality
delivered by the UE65JS9000.

As for the question of whether the UE65JS9000 is a whole £2000 less impressive than the UE65JS9500,
the fairly straightforward answer is no. There’s no doubt that the
UE65JS9500 is the better performer, especially as you don’t have to
worry about backlight clouding. But the UE65JS9000 is still more than
good enough to stand head and shoulders above the rest of the edge LED
TV crowd right now, and the £2000 it saves you versus the UE65JS9500
clearly represents a substantial amount of money to typical UK
households.

Although
the need to work around potential backlight clouding issues means the
UE65JS9000 is a noticeable step down from the incredible UE65JS9500, the
extent of that step-down is pretty easy to live with in the context of
the UE65JS9000’s £2000 cheaper price tag. Which means that an all-round
package the UE65JS9000 is every bit as remarkable as its
benchmark-setting sibling.