Hopes that the UE55MU9000 might represent a performance/price sweet spot in Samsung’s 2017 TV range are challenged by my first impressions of its picture quality. As usual I went straight for the jugular by feeding it a variety of very contrast-rich high dynamic range scenes from Ultra HD Blu-ray discs, and it was startling to see how much the MU9000 struggled with them.

The issue is a familiar one with edge-lit LCD TVs when they’re trying to show HDR: pretty distracting amounts of backlight clouding spilling into the picture.

In this case there are a number of quite distinct clouds protruding a good few inches into the image along the top and bottom edges. These are especially visible if what you’re watching has black bars above and below it, but can be seen in dark 16:9-ratio visuals too. 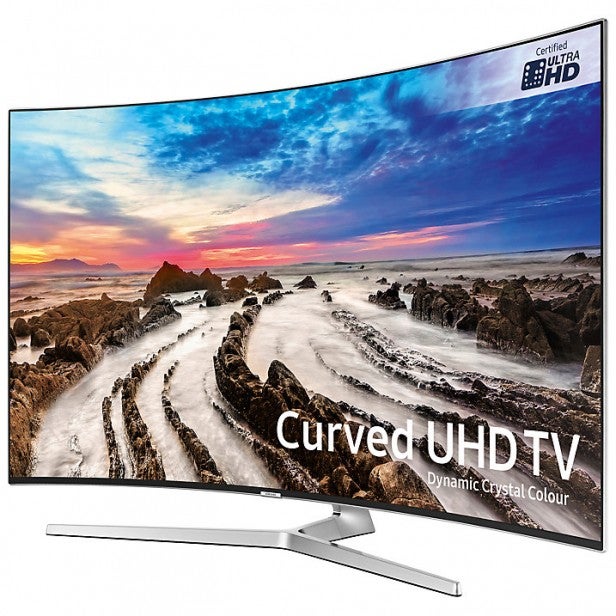 The clouding looks slightly different, surprisingly, to that seen with last year’s KS9000 model; there are more clouds in more central areas of the top and bottom edges, whereas the KS9000’s clouding tended to be more focused in the corners.

You can greatly reduce the distraction potential of these backlight clouds by reducing the contrast enhancer and local dimming settings to low. However, this hits the image’s brightness pretty heavily.

To put some numbers on this, with local dimming on high, a 10% white HDR window delivers a brightness measurement of around 700 nits. This plummets to around 600 nits if you set the local dimming to Standard and around 595 nits with Local Dimming on Low.

This isn’t the end of the world; at least it gives you usable options for separate bright and dark room viewing conditions. But ideally I’d have hoped for its backlight to have handled its brightest output more effectively. 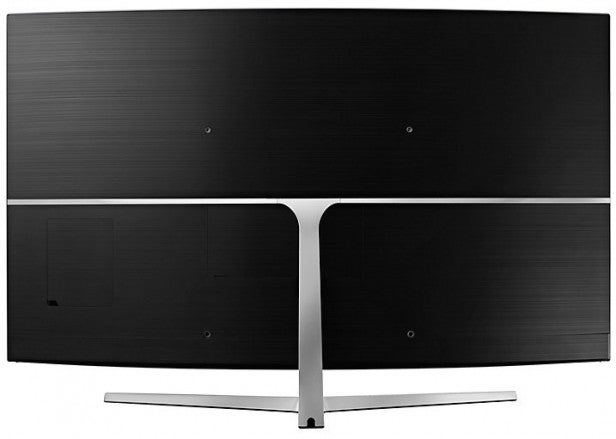 I also found a strange bug during my tests whereby the 55MU9000 doesn’t switch into HDR mode properly if you’ve got its Standard picture preset selected and try to play HDR from a USB source. You have to cycle through the other picture presets and back to Standard before the screen correctly enters HDR mode. This shouldn’t affect many users, though, and will in any case likely be fixed by firmware update. [Update: In fact, I’m now told that Samsung is already rolling out a firmware fix!]

Watching the 55MU9000 in a bright room can lead to a few screen reflection issues, as it clearly doesn’t benefit from the same remarkable light filtering systems that make Samsung’s QLED TVs so uniquely watchable in bright conditions.

The reflection situation isn’t helped by the way the screen’s curvature tends to stretch any reflections across more of the screen than you’d see with a flat TV. The best way to reduce the impact of the backlight clouding issues, therefore, is to set a dim lamp just off to the side and ideally slightly behind the screen in an otherwise mostly dark room.

Having started in a negative vein, I might as well get the MU9000’s other problems out of the way, too. Firstly, it only delivers a pretty limited effective viewing angle; contrast starts to reduce considerably if your viewing angle takes you beyond around 25 degrees off axis.

Secondly, there’s some noticeable colour striping with HDR. This doesn’t crop up especially often, but when it does, it’s quite noticeable – such as in the white clouds around the aliens in Arrival, or the twilight skies above Moses on the beach before the sea parts in Exodus.

At which point it’s high time we got on to the good stuff. I’ll start with the MU9000’s really strong black level performance, where the blackness isn’t affected by backlight clouding. Blacks really can look black, and they do so without any sense of the ‘glowing’ overtone that sometimes characterises LCD TVs when they’re handling dark scenes. 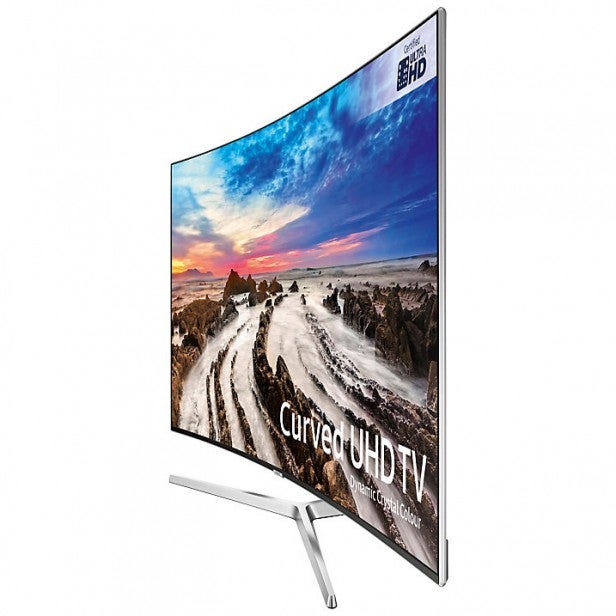 There’s sometimes a little crushing of black detail in dark corners during HDR footage, but it’s not severe (at least with the Contrast Expander on high), and doesn’t diminish the image’s strong sense of contrast.

It’s worth adding that black levels look pretty much immaculate with standard dynamic range sources, since their reduced luminance range pretty much eliminates any backlight clouding concerns and makes it easier to balance light across bright and dark areas.

You can turn SDR sources into something approaching HDR via Samsung’s HDR+ feature. However, while this uniquely aggressive SDR-to-HDR conversion system works well on many levels and could be used with typical ‘daytime TV’ sources, I’d argue that the extra backlight clouding it introduces might make it best avoided for movie viewing.

Detail levels are immensely high with native 4K sources, bringing out even the subtlest of textures – provided that you avoid the strangely soft Movie preset. The set retains its clarity during motion for the most part, as long as you follow the motion processing advice given in the Setup section.

The UE55MU9000 impresses when it comes to HDR ‘clipping’, retaining more details and subtle grayscale information in the very brightest areas of HDR pictures than most mid-range TVs. 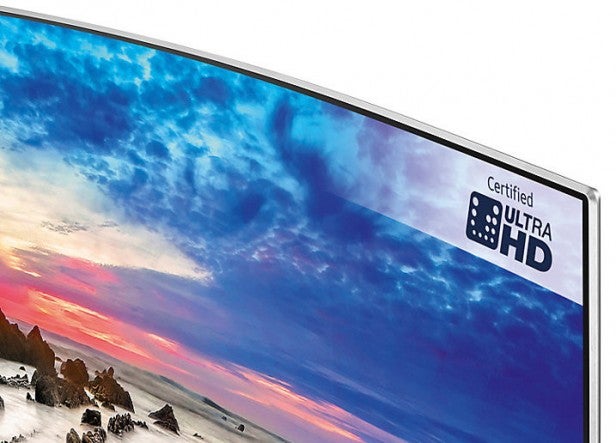 More UE55MU9000 brilliance can be seen in its upscaling of HD sources to its native 4K screen. Detail levels are enhanced without source noise or grain being excessively exaggerated, and provided you don’t push the sharpness setting higher than around its 30 level, edges look crisp without appearing stressed.

Aside from the rare outbreaks of striping mentioned earlier, colours are rich and refined, with plenty of tonal subtlety and detail – regardless of whether you’re watching HDR or SDR material.

The good levels of brightness the screen can deliver in HDR mode ensure that these colours have a pleasingly real-world punch to them that you seldom get in the sub-£2000 55-inch TV price bracket.

Finally on the picture front, there’s some excellent news for gamers: just 10ms of input lag when operating the UE55MU9000 in its Game mode. This is as good as it gets in the TV world, and should have pretty much no impact on your gaming abilities.

The UE55MU9000’s sound is solid. Its curved design gives it a little more bodywork to play with than some rival ultra-skinny flat models, and this appears to help it deliver a nicely rounded sound. Trebles seldom sound harsh, bass is smooth and well integrated (if not especially deep), and the mid range is wide enough to rise to the challenge of an action scene. 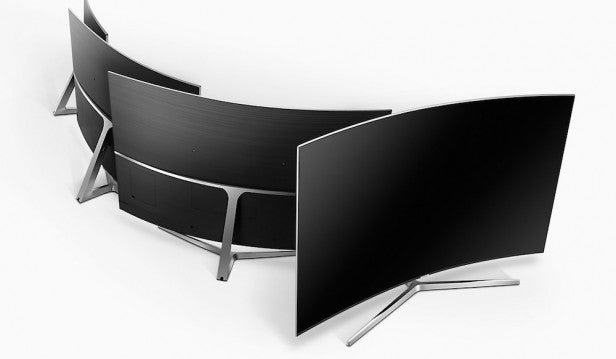 The answer to this largely depends on how you usually watch TV. If you’re a home cinephile fond of blacking out your room when you want to watch a film, the backlight clouding issues could be an issue.

If you predominantly watch TV with at least some light in the room, on the other hand, then the UE55MU9000’s brightness comes into its own, while the ambient light hides its backlight flaws. Just bear in mind that if you’re likely to have any direct light sources reflecting on its screen, its curved finish will make those reflections cover more of your picture than a flat screen would.

The UE55MU9000’s rather cloud-prone backlighting doesn’t change my growing belief that it would have been a good idea for Samsung to include at least a couple of direct-lit series in its 2017 HDR TV range. That said, it still benefits from Samsung’s renowned colour, brightness and sharpness strengths. Its input lag prowess makes it a potential beast for gamers, too.