I’d feared that the UE55KS9000’s slimmer profile versus Samsung’s 2015 high-end TVs would have a detrimental effect on its sound quality, but actually it’s the best-sounding ‘mainstream’ TV Samsung has produced to date.

Somehow the TV’s slim form houses separate subwoofer, mid-range and tweeter drivers for a clearer, more robust sound that can go loud without distorting. It has a good sense of scale, and balances out decent amounts of treble detailing with a fairly robust bass line.

The use of a little forward-facing port on its bottom edge, meanwhile, delivers sound with markedly more directness and ‘attack’ than is customary with Samsung TVs, as well as helping sound effects and voices sound accurately positioned on the screen.

Samsung has come up with another ‘smart’ remote control for its high-end 2016 TVs – and this one is by far its best effort yet.

It fits your hand beautifully, and its greatly reduced button count – apparently the result of exhaustive consumer research – makes it much easier to access the main features you tend to use on a day-to-day basis.

It’s a relief, too, to find that Samsung has simplified navigation by doing away with the well-intentioned but ultimately fiddly ‘point-and-click’ control option seen on its past couple of TV generations. There’s instead just a tactile and well-calibrated touchpad control you can operate easily with your thumb, as well as some simple up, down, left and right arrow buttons.

Rather brilliantly the UE55KS9000 is also a universal remote control capable of operating all your attached source gear. It actually uses a variety of techniques to automatically learn what source equipment you’ve got, so there’s none of the setup tedium associated with other universal remotes.

Obviously there can be some complexities involved with ‘porting over’ the functionality of remotes that may have far more buttons than the few on the Samsung’s remote. But for the most part the automatic universal control system works remarkably well.

Samsung TVs have traditionally been a hit with gamers, so it’s great to find that using the (now mercifully easier to find) Game preset, my input lag measurements recorded a figure of around 24ms on average. This is an excellent result for a 4K UHD TV. 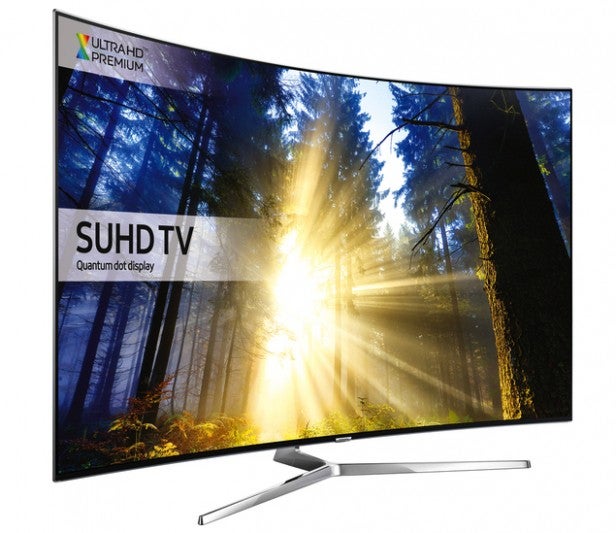 If you want to get the purest, most accurate HDR picture at anywhere near an affordable price this year, the UE55KS9000 looks set to be in a class of its own. The extremes of its colour range and, especially, brightness performance are extraordinary.

Provided you set it up sensibly it’s also a stunning performer with the standard dynamic range video most of us will still be watching for most of our viewing time.

The TV itself looks a million dollars so long as you don’t have a problem with curved screens, and its smart TV system is a big step forward.

The UE55KS9000 is a no-go zone for 3D fans, though, and difficulties controlling the vertical backlight during the otherwise glorious HDR playback can sometimes be distracting.

It looks gorgeous, sounds great, and its performance with UHD HDR content is so good that once you’ve witnessed it, it’s hard to go back to anything else. No good if you’re a 3D fan, though.