The £700 UE40F6800 is a 40-inch LCD TV with edge LED lighting that sits in the upper-mid region of Samsung’s 2013 TV range. Its extensive feature count includes Smart TV facilities, active 3D playback, and a relatively high-grade LCD panel – all of which bodes very well for its potential performance. 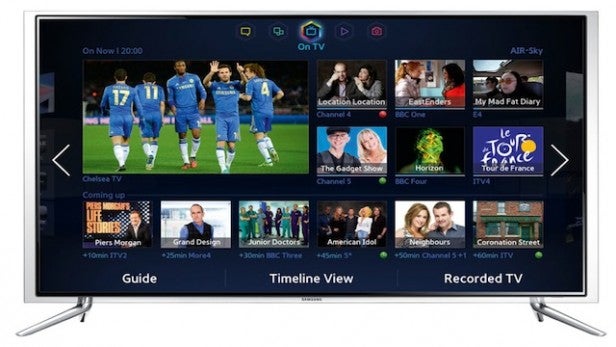 The UE40F6800 is quite unusual for a Samsung TV in that its frame protrudes some distance beyond its screen, especially along the left and right edges. All in all you’re looking at upwards of an inch of frame on these edges, with a good three-quarters of an inch on the bottom edge too. This could be a potential issue if you’re trying to fit the TV into a very tight space.

As you can tell from the images of the UE40F6800, though, the large frame we’re talking about isn’t your usual slab of grey or black. It’s actually transparent for the most part, with just a very skinny inner black frame. This makes for a pretty dramatic look unlike anything else in the TV world at the moment, especially when you add in the unusual ‘split leg’ tabletop support.

The UE40F6800 is very well-connected, with highlights of four HDMIs, tuner ports for both Freeview HD and Freesat HD, three USBs and both wireless and wired network options. Not surprisingly the USBs can be used for either playing back files stored on USB devices or for attaching a hard disk recorder for timeshifting from the TV.

The network options, meanwhile, support DLNA streaming from networked PCs, as well as enabling you to jack in to Samsung’s latest Smart TV online service. This service has been covered extensively in our Samsung Smart TV 2013 review. Suffice it to say here, then, that its ability to learn your viewing habits and make suggestions of other content accordingly together with its multi-hub approach, and huge volume of video streaming services make it the most sophisticated and useful smart TV system currently available. Samsung’s unique provision of all the key UK catchup TV services – the BBC iPlayer, the ITV Player, 4OD and Demand 5 – is particularly welcome.

Even Samsung’s once-flakey voice and gesture control options have started to become genuinely useful following firmware updates over the past few months, with the only catch being that you need to commit to actually learning your way round these alternatives to normal handset control before they start to feel intuitive enough for regular use. 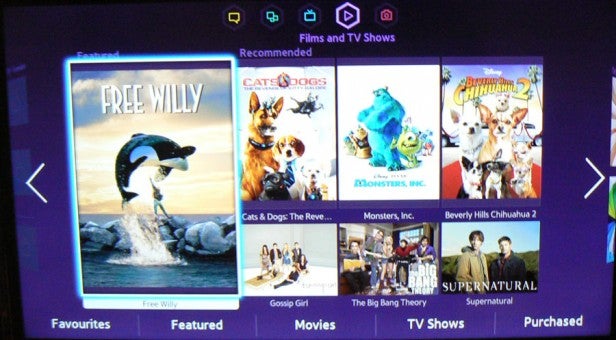 The LCD panel at the UE40F6800’s heart is illuminated by edge LED lighting using one of Samsung’s Macro Dimming systems, where the picture is broken down into small areas for more accurate analysis when determining the best backlighting approach to apply to the image at any given moment. This isn’t the same as local dimming, where individual segments of the LED lighting system can have their brightness levels adjusted individually, but Samsung has used macro dimming to startlingly good effect on other models this year, so we have high hopes for it here too.

The UE40F6800 sports one of Samsung’s 400CMR systems, which essentially combines a 100Hz native panel with backlight scanning to deliver a 400Hz-like experience. This is a substantial step down from the 1000CMR system found in Samsung’s F7000 and F8000 TVs, but we guess this is the sort of compromise you have to expect when shifting down from high-end TVs to mid-range ones! Hopefully motion will still look crisp and clean.

The last feature to cover is 3D. The UE40F6800 supports the active 3D format (Samsung still resolutely refuses to touch with a bargepole the passive 3D format developed by arch-rival LG), and ships with two pairs of ultra lightweight active shutter glasses.

The UE40F6800 is a tad complicated to set up initially, thanks to the sophistication of its smart TV menus and the need to set up a Samsung account along with the separate accounts of any online services you might subscribe to.

To be fair, this ‘cover-all’ Samsung account kind of justifies itself in the end by providing an umbrella location for all your online services. And it may also prove useful in TV generations to come with hitherto unseen new Samsung smart features. But as it stands right now we’re not wholly sure the ends justify the hassle of the means.

Setting up the UE40F6800’s images requires a little work too, as we continue to feel that none of Samsung’s four provided picture presets are particularly helpful since they all – even the Movie one – go for too much backlight brightness and contrast, leaving pictures looking a little grey where they should look black.

Just as well, then, that the set provides a huge array of tools to help you get pictures looking pretty much exactly how you want them to look. This includes being able to produce a colour palette very close indeed to the colour settings demanded by a ‘professional’ installation, despite Samsung not having bothered to seek the endorsement of the Imaging Science Foundation.

Among the most important adjustments available on the UE40F6800 are the various settings for its motion processing (we’d stick the lowest-powered ‘Clean’ option for most of the time, or turn the motion processing off entirely if what you’re watching is quite grainy, for reasons discussed in the next section of the review), its noise reduction tools (best left off for all HD viewing) and its backlight and contrast settings. The former is ideally best set as low as its 7 or 8 level for dark room viewing, while contrast should be nudged down from the near-maximum levels employed by the TV’s presets to around 80 to reduce the appearance of noise in the picture.