Aside from the fact that a 40-inch screen is barely big enough to deliver a truly engaging, immersive 3D performance, the UE40F6800 is an excellent 3D performer. Its pictures look exceptionally bright and colour-rich by active 3D standards, while the set’s excellent black level response is if anything even more effective in the third dimension, since it helps the screen deliver a more palpable sense of depth during dark scenes than most rival sets manage.

The UE40F6800’s sharpness also serves it well with 3D Blu-rays, as it delivers a superbly detailed, crisp image that seems almost tailor made to highlight the drop off in detail and sharpness you get with the rival passive 3D format.

You do experience a degree of flickering if you try to watch 3D in a bright room setting, reminding us of one of the passive format’s advantages. But thankfully when it comes to that traditional active 3D issue of crosstalk ghosting noise the UE40F6800 proves outstandingly good, only exhibiting the phenomenon with particularly extreme (in terms of image depth and contrast) content.

Putting the seal on the UE40F6800’s convincing 3D effort is its 3D motion handling, which is less juddery than that of most rival TVs even if you don’t activate Samsung’s motion processing system. Though actually we felt surprisingly comfortable with using the motion processing on its lowest ‘Clear’ setting with 3D, as it smoothes things out without the images starting to look processed, and without generating many nasty side effects like flicker and smudging around the edges of moving objects. 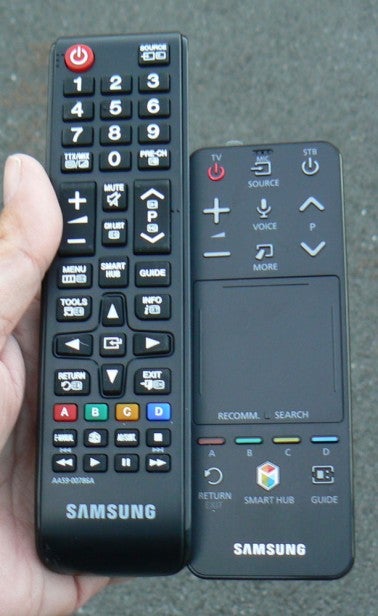 Sound is the weakest card in the UE40F6800’s mostly winning deck. It does OK with relatively undemanding content at relatively quiet volumes, sounding clean and warm.

But when the going gets tough the mid-range starts to sound cramped and compressed, with trebles becoming harsh and voices starting to sound swamped.

It’s not horrifically bad by any means, and at least the cabinet doesn’t succumb to speaker phutting or buzzing. But sound quality remains an area where we feel Samsung could do better with its mid-range sets.

The UE40F6800 ships with two remote controls: a standard one, and a smaller, less button-heavy one equipped with a trackpad.

And actually, for the most part this little remote works rather well, making it quickly become our default remote. The trackpad has just the right level of responsiveness, and the reduced button count keeps things simple once you’ve got used to it.

A set like the UE40F6800 obviously has huge appeal as a gaming display. So it’s great to find that – provided you’ve activated its Game preset, cunningly hidden in the System menus – it only suffered around 33ms of input lag during our tests, which is low enough not to significantly upset your game skills. 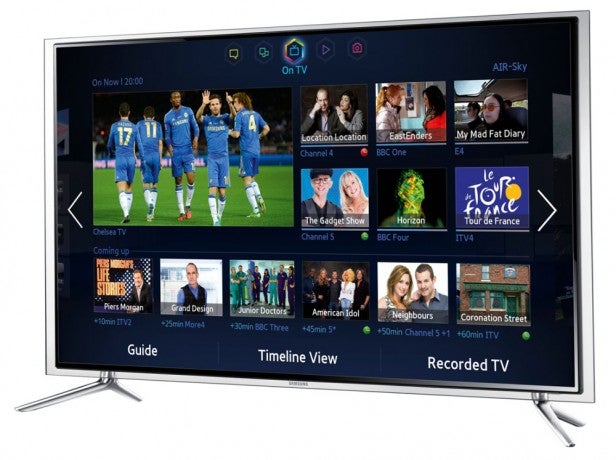 As an all-round package, with price, features and performance all taken into account, the UE40F6800 is as good a 40-inch TV as we’ve seen this year. The unexpectedly wide frame around the screen could just possibly present a problem for a handful of installs, and if you’re a 3D fan we’d encourage you to try and move up to a 46-inch screen. But otherwise the UE40F6800 is hard to resist.

The only serious competition for the UE40F6800 aside from Samsung’s own F7000 and UE40F8000 step-up models would be the Sony KDL-40W905, with its exceptional local dimming system and Triluminos colour handling. But this will set you back a good couple of hundred pounds more than the UE40F6800.

The beautifully simple bottom line with the UE40F6800 is that no other 40-inch TV at the moment offers so much quality and so many features for so little money, making it yet another notch in Samsung’s 2013 TV belt.